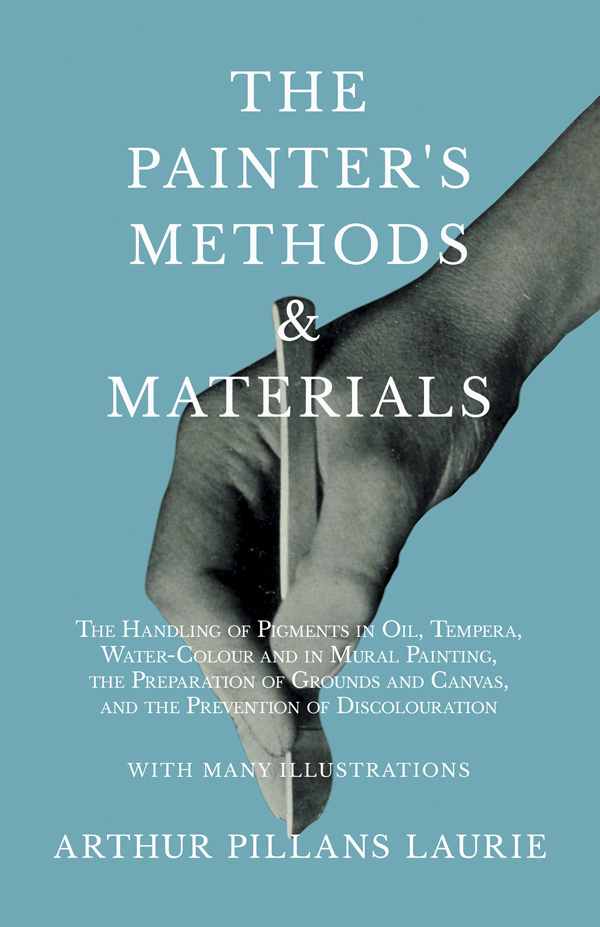 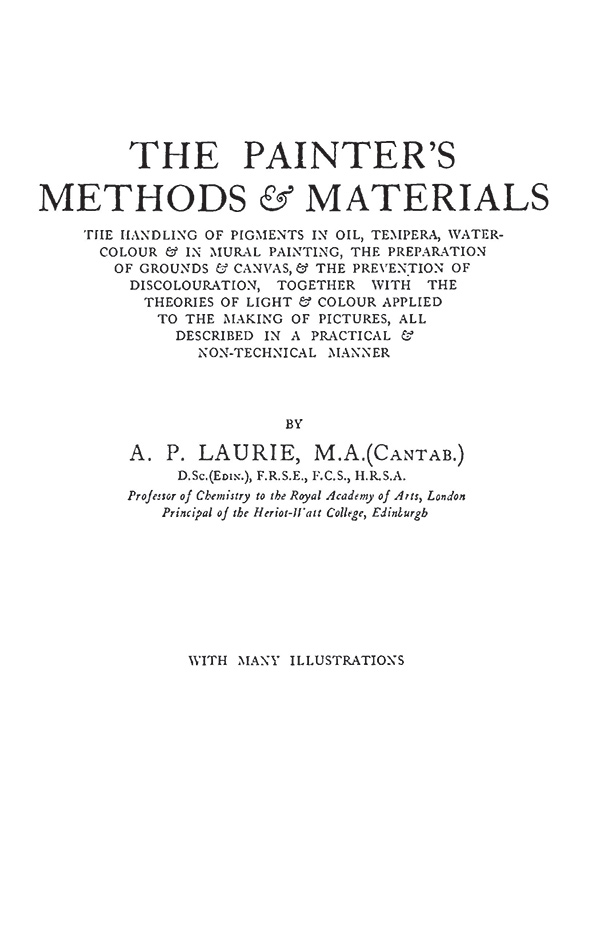 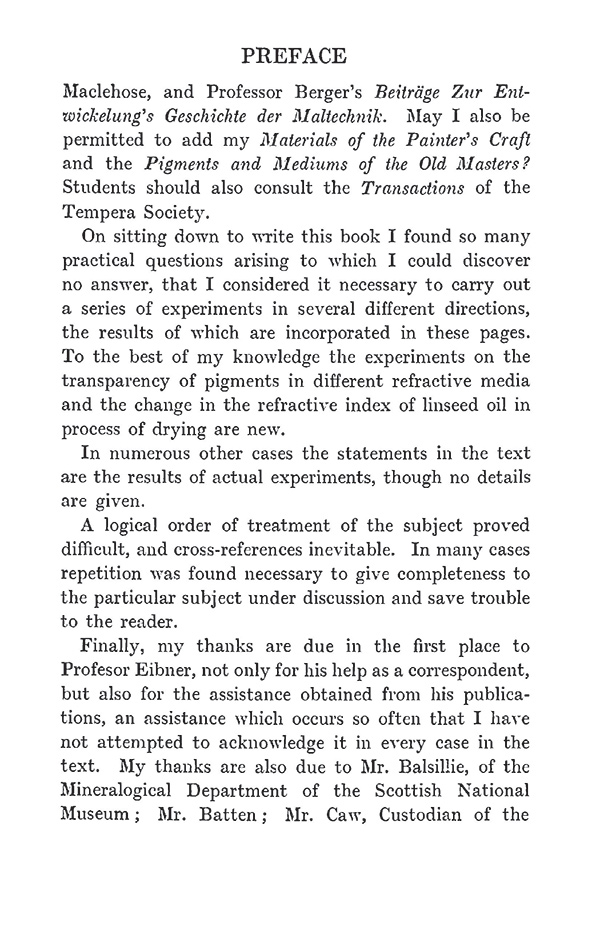 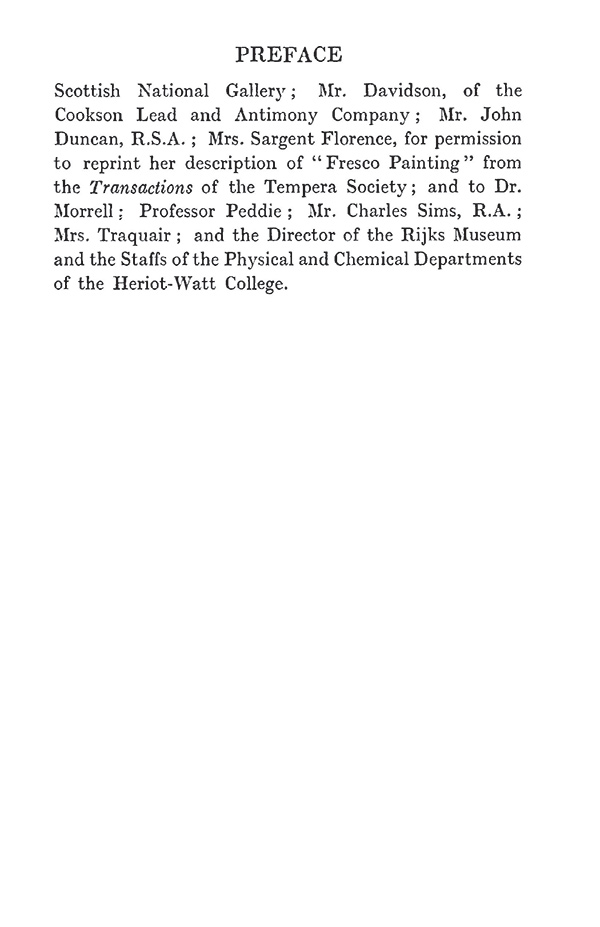 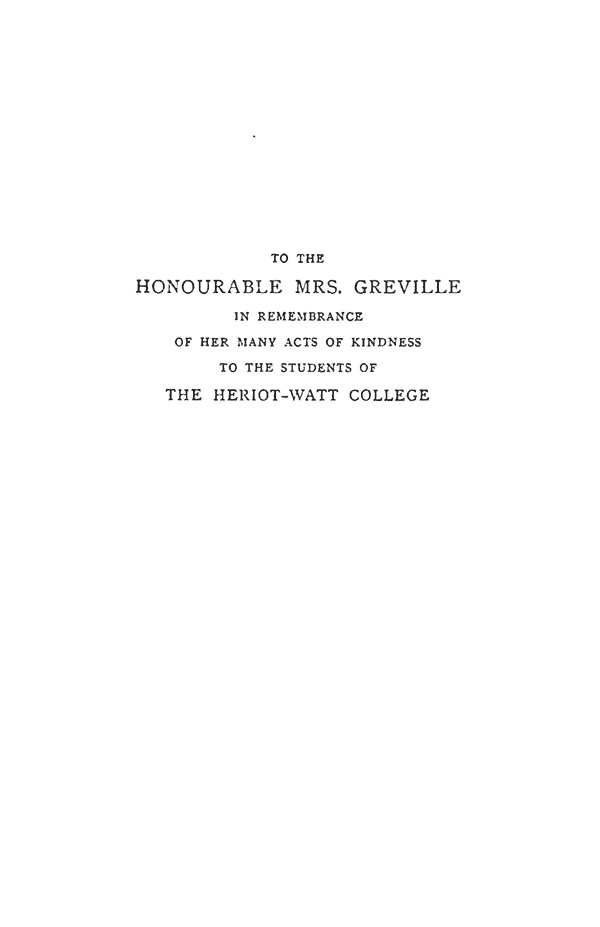 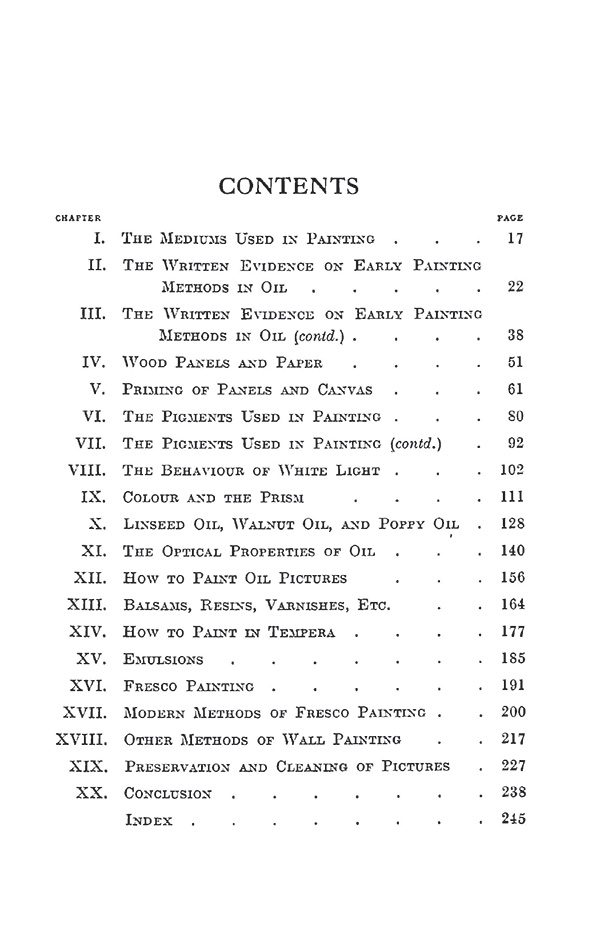 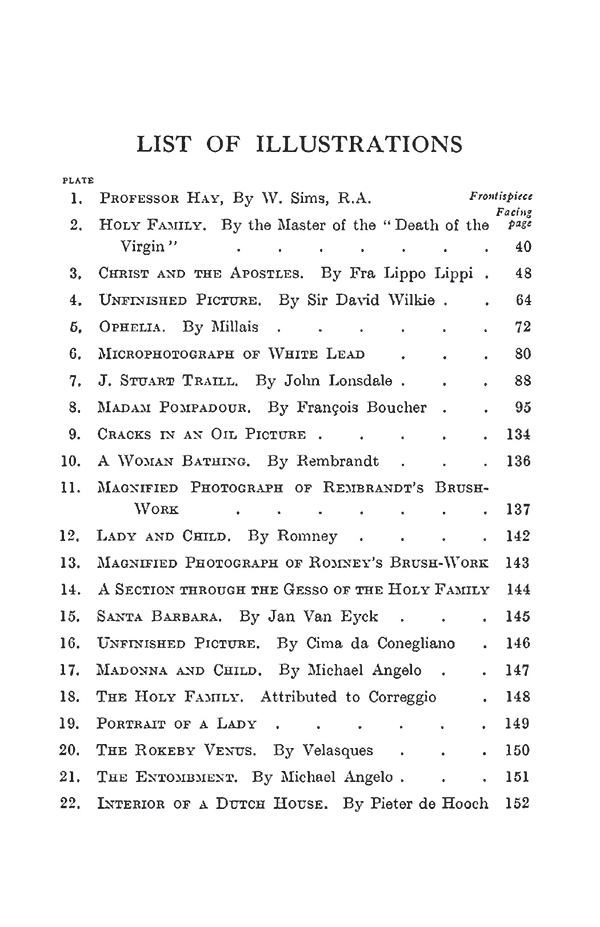 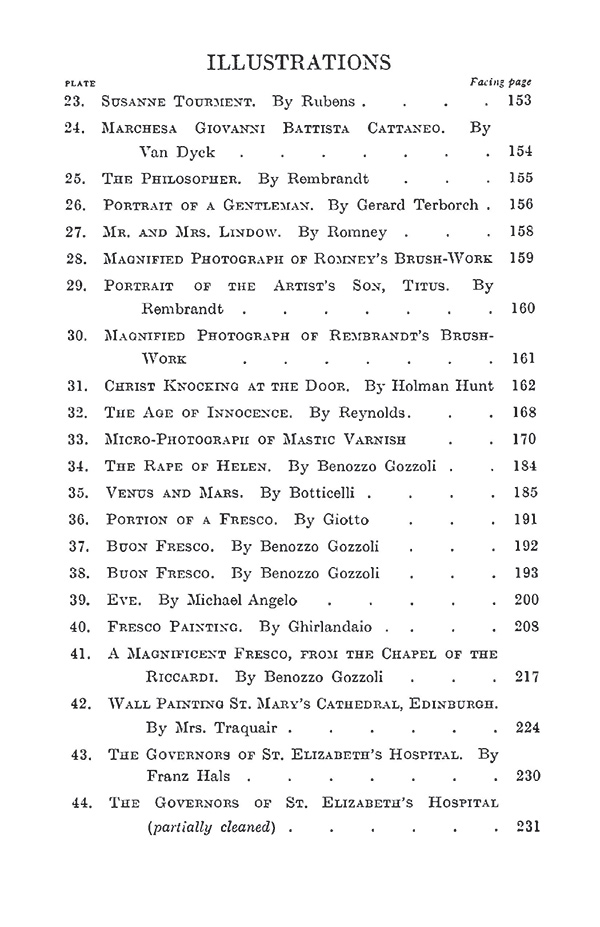 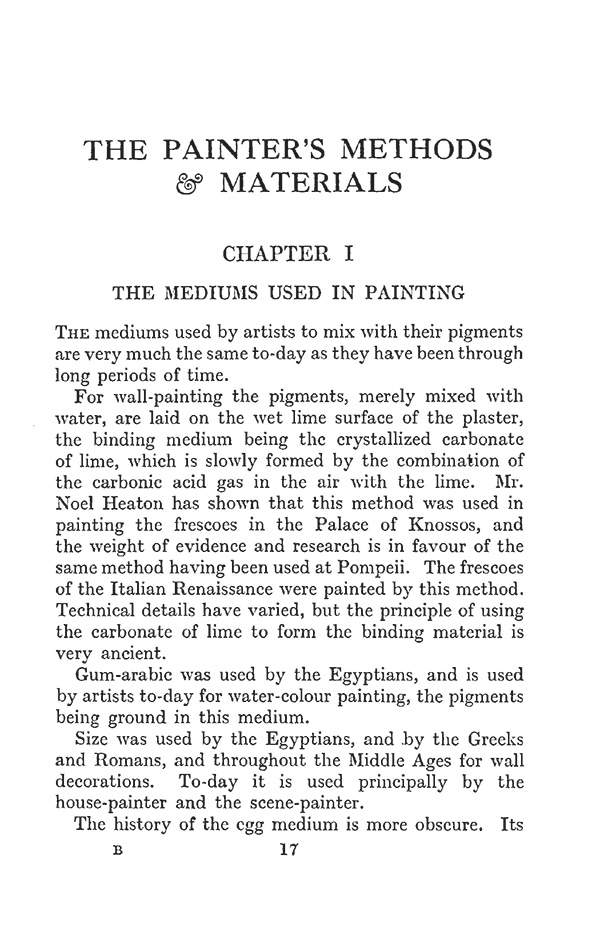 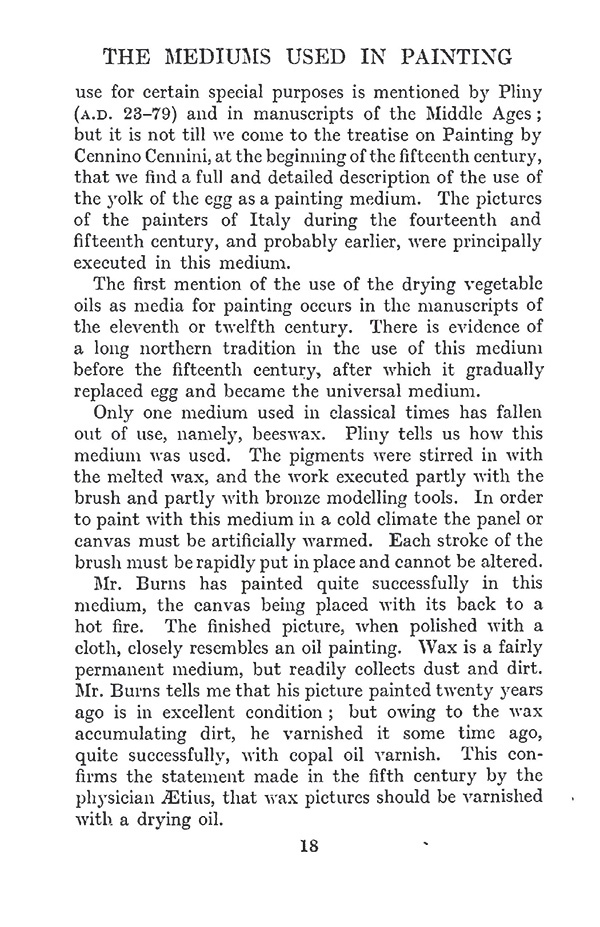 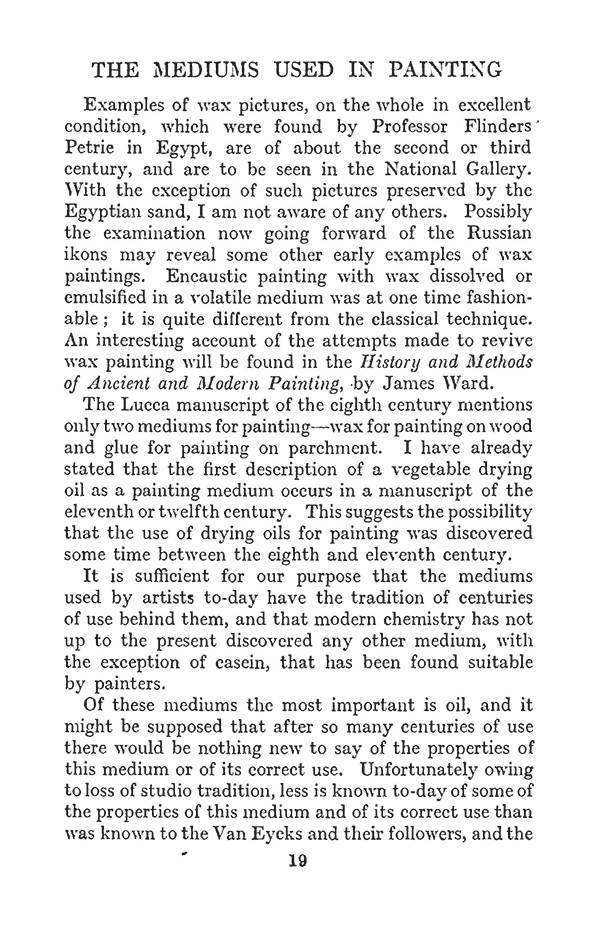 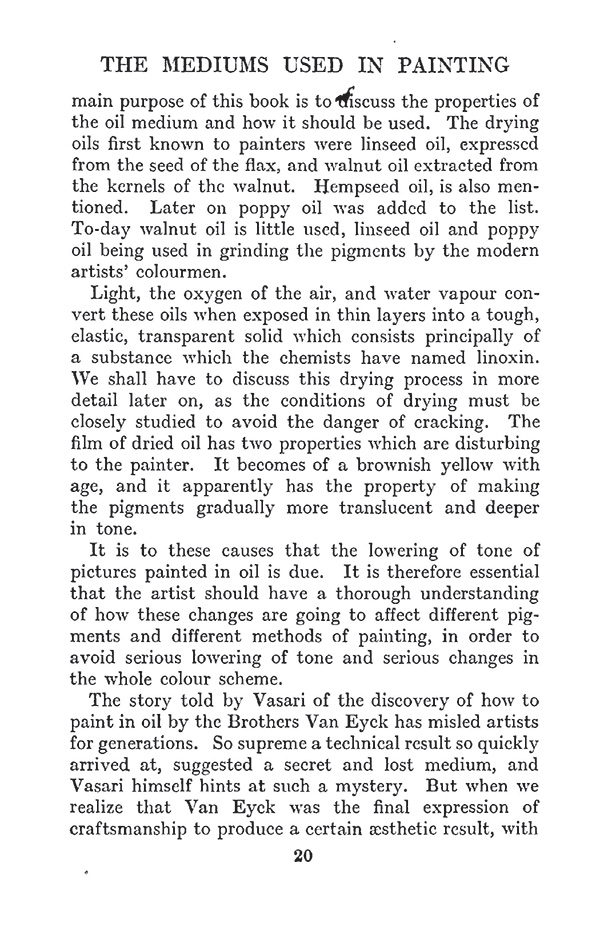 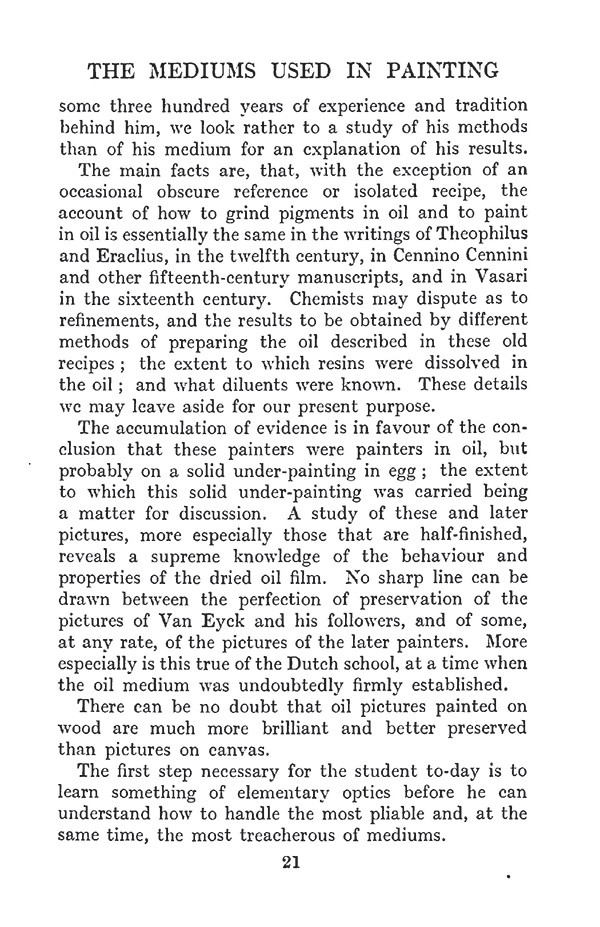 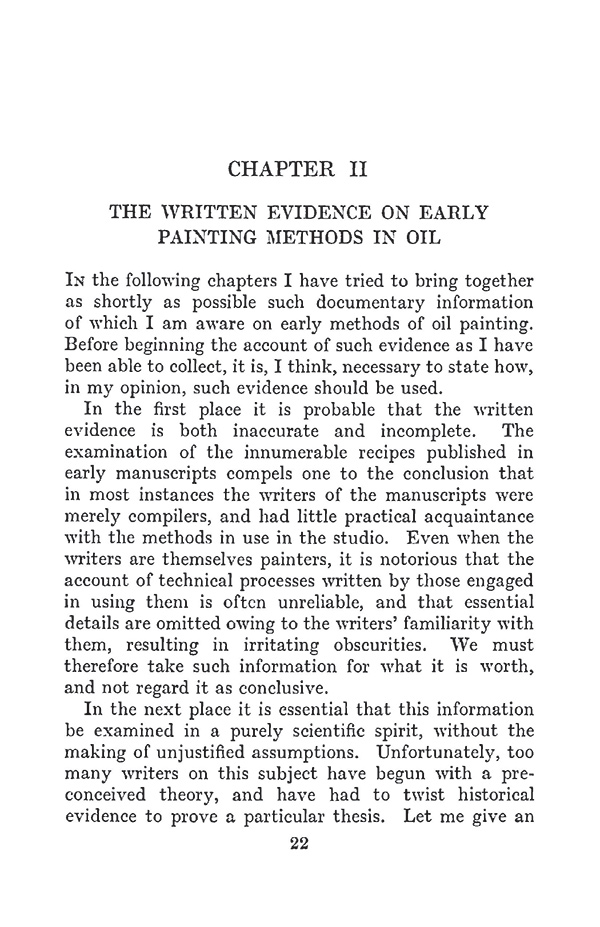 The Handling of Pigments in Oil, Tempera, Water-Colour and in Mural Painting, the Preparation of Grounds and Canvas, and the Prevention of Discolouration – With Many Illustrations

A comprehensive guide to all things painting, dealing with everything from how to use use pigments in tempera to water-colour, mural painting, the theories of light and colour, and much more.

“The Painter’s Method and Materials” is a comprehensive guide to all things painting, dealing with everything from how to use use pigments in tempera to water-colour, mural painting, the theories of light and colour, and much more. This timeless volume will prove to be an invaluable resource for painters both new and old, and it would make for a marvellous addition to collections of allied literature. Contents include: “The Mediums Used in Painting”, “The Written Evidence on Early Painting Methods in Oil”, “Wood Panels and Canvas”, “The Pigments Used in Painting (contd.)”, “The Behaviour of White Light”, “Colour and the Prism”, “Linseed Oil, Walnut Oil, and Poppy Oil”, “How to Paint Oil Pictures”, etc. Many vintage books such as this are increasingly scarce and expensive. We are republishing this volume now in an affordable, modern, high-quality edition complete with a specially-commissioned new the original text and artwork.

Arthur Pillans Laurie, the eldest son of the late Professor Simon Somerville Laurie, LL.D., the first Bell Professor of The Theory, History and Practice of Education in the University of Edinburgh, was born in Edinburgh on November 6th, 1861. He was educated in his native city, first at the Academy, and then at the University (B.Sc., 1881), proceeding later to King’s College, Cambridge, of which he was an exhibitioner and prizeman. In 1884, his name appeared in the list of first-class Honours of the Natural Sciences Tripos (Chemistry), together with several others, afterwards to become well known in various branches of science. He was elected into a Fellowship of his College in 1888.

About this period, Laurie made the acquaintance of Holman Hunt, whom as time went on he came to know very well. The Pre-Raphaelite master encouraged him to study the scientific aspects of painting, and thus in effect spread out before him the pattern of his life’s work. Then, in 1891, Laurie contributed a paper to the Society of Arts Journal entitled On the Durability of Pictures Painted with Oils and Resins, which won him the Society’s Silver medal; in the same year he delivered the Cantor Lectures before the same Society under the title The Pigments and Vehicles of the Old Masters. Further contributions to the Society’s Journal on cognate subjects appeared in 1892, 1893, 1907, and 1922. To read these in retrospect to-day is to realise that they represent the work of a mind of somewhat unusual character, at once versatile and original. Pathfinder and seer, Laurie has not laboured in vain.

Wide interests continued to dominate his busy life. In 1895, he became Lecturer in physics and chemistry at St. Mary’s Hospital Medical School, and later was appointed an Examiner for the Royal College of Physicians, and for the City and Guilds Institute. The Home Office Committee on Pottery Manufacture also claimed him as a member. Always interested in educational matters, he was Assistant Commissioner to the Royal Commission on Secondary Education in 1895, and in 1900 accepted the Principalship of the Heriot-Watt College in his native capital. Twelve years later, he added to his responsibilities the Professorship of Chemistry in the Royal Academy of Arts. The first of these appointments he held for 28 years, and the second for 24 years. Meanwhile, in 1895, he had obtained the degree of D.Sc. (Edinburgh), for a thesis entitled The Constitution of Alloys.

The war of 1914-18 found Laurie in constant request, largely on account of his acquaintance with the late Earl Llyod George who appreciated the value of his capacity for swift experimentation and breadth of technical experience. He served on numerous Bodies connected with supply and inventions, as well as being concerned with Building Research, to which reference is made later. Running through all these activities can be perceived the influence of a sound “classical chemistry;” his training and outlook supplied the basis for what an earlier generation would have called “experimental philosophy.” Which Laurie knew instinctively how to apply to the problems at issue.

Between two wars, Laurie gave much attention to the possibility of using ethyl silicates as stone preservatives; in particular his work on silicon esters should be mentioned. He was a member of the Stone Preservation Committee of the Building Research Board, and then, from 1926 – 1930, of its Standing Chemical and Weathering Committee. Earlier he had published several papers on stone decay. He conducted experiments at Hampton Court and elsewhere in collaboration with the Ancient Monuments Department of the Ministry (then the Office) of works. In favourable circumstances silicon esters enable the stone to be hardened and consolidated without the introduction of a soluble salt. Later developments have been in other directions, but it is probable that they owe much of their value to Laurie’s pioneer interest in ethyl silicates.

Laurie’s published work covers an extensive field. His output of books alone is impressive, as the following resume will show—The Food of Plants (1893), Processes, Pigments and Vehicles (1895), Greek and Roman Methods of Painting (1910), Materials used in the Painter’s Craft from the Earliest Times to the End of the XVII Century (1911), The Pigments and Mediums of the Old Masters (1914), The Painters’ Methods and Materials (1926), Simple Rules for Painting in Oils (1934), Pictures and Politics (1934), New Light on Old Masters (1935), and The Technique of the Old Masters (1949).

- An Excerpt from
Obituary Notices, Journal of the Chemical Society, 1950

He Came Down from Heaven

Paper Flowers and How to Make Them