Log In
This book can be found in:
Fiction | Crime, Mystery & Thrillers
Poetry & Drama | Plays & Playscripts 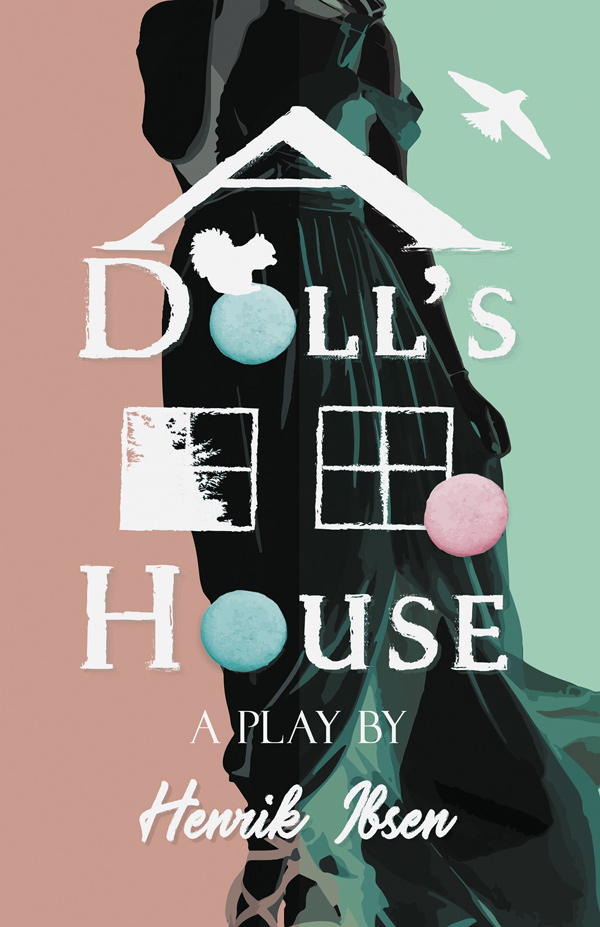 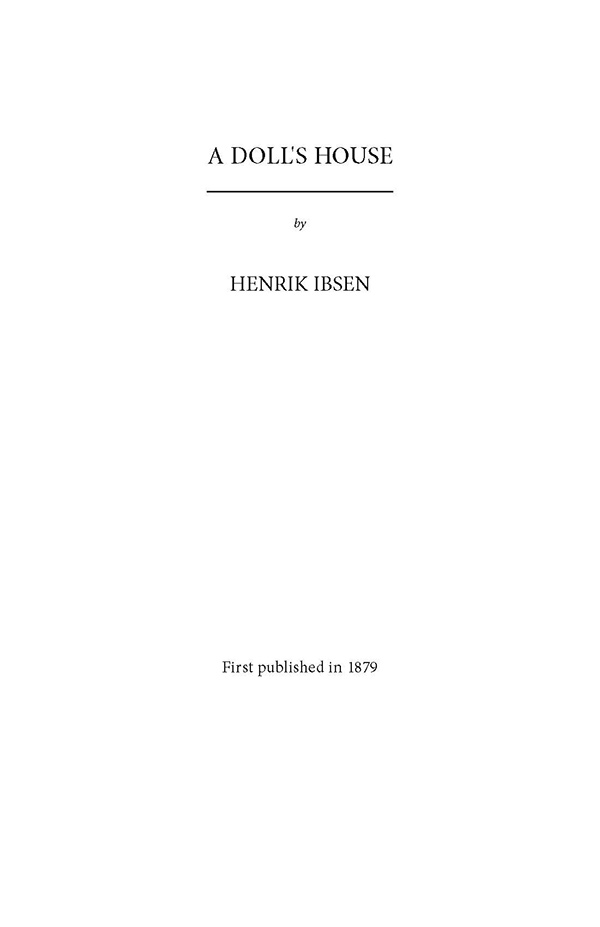 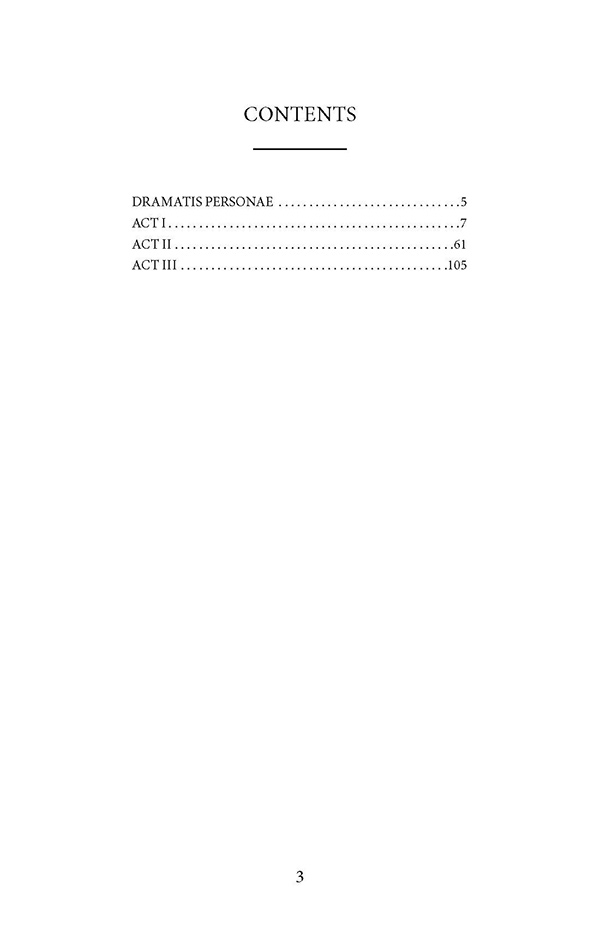 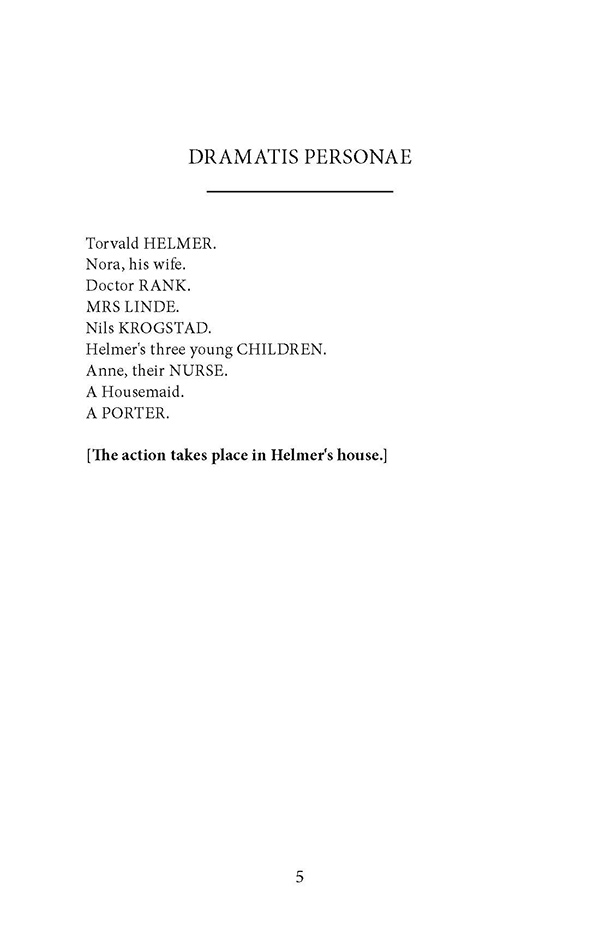 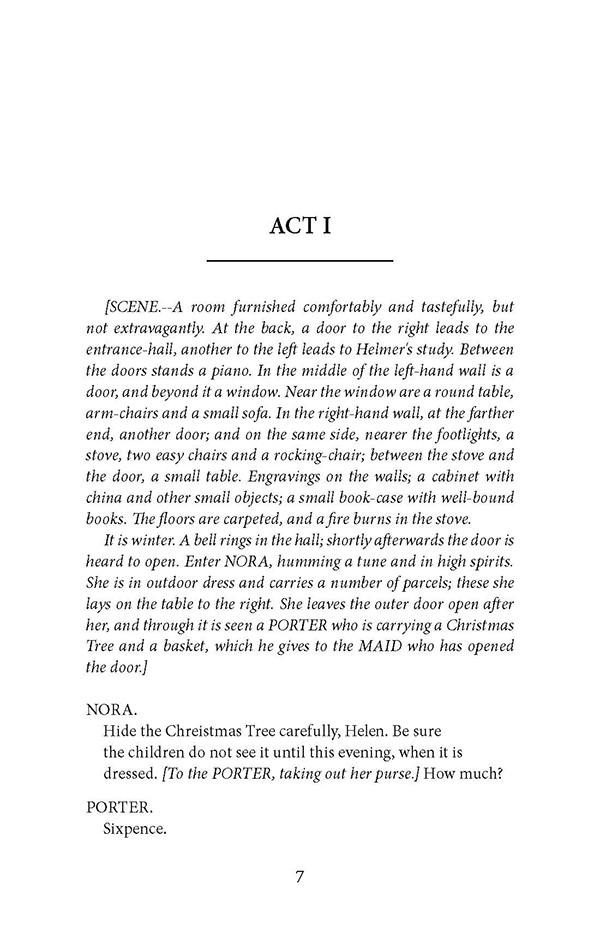 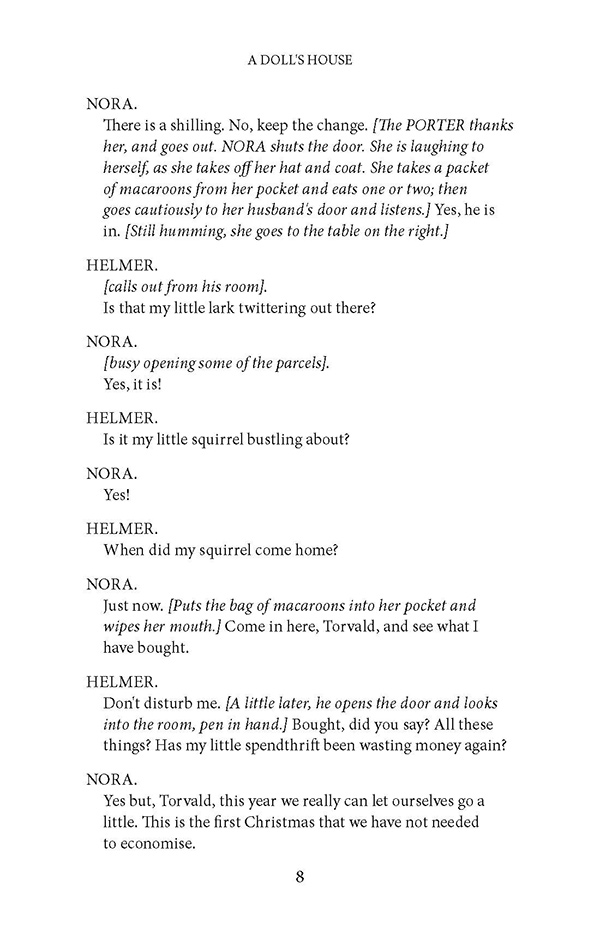 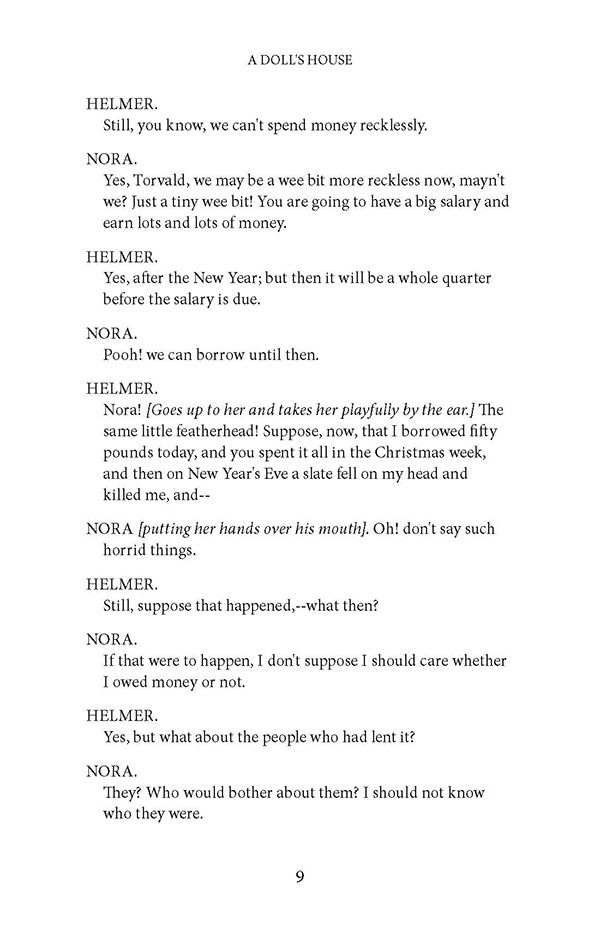 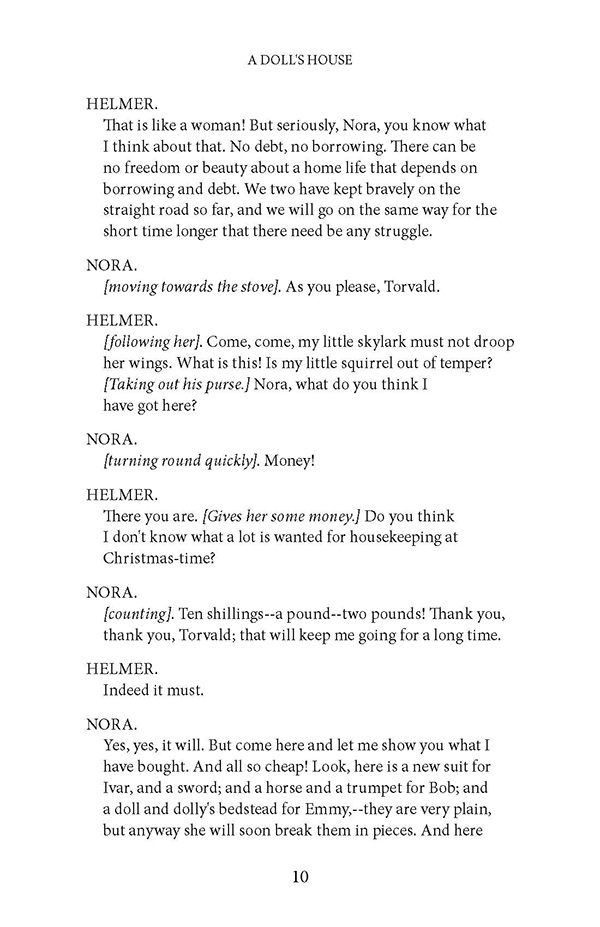 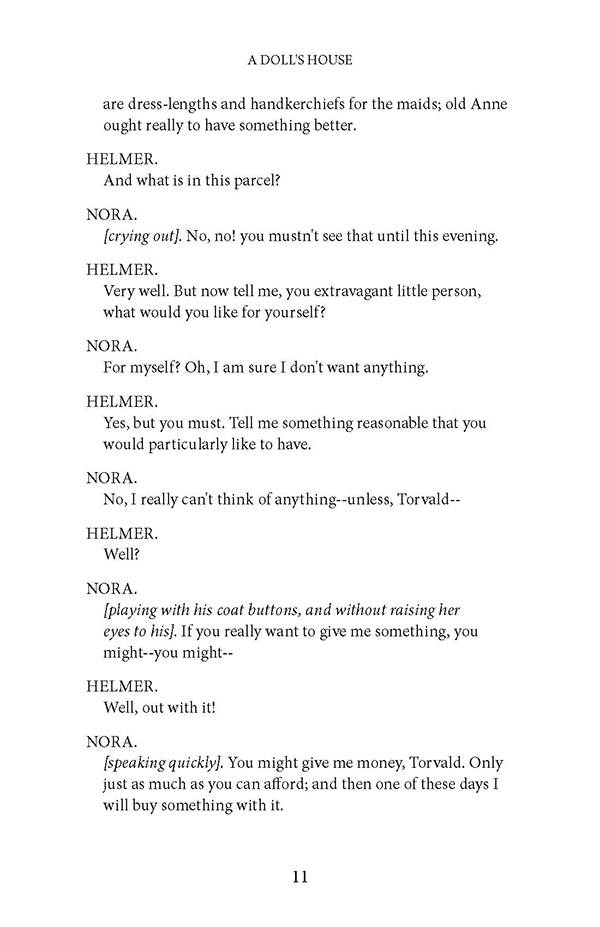 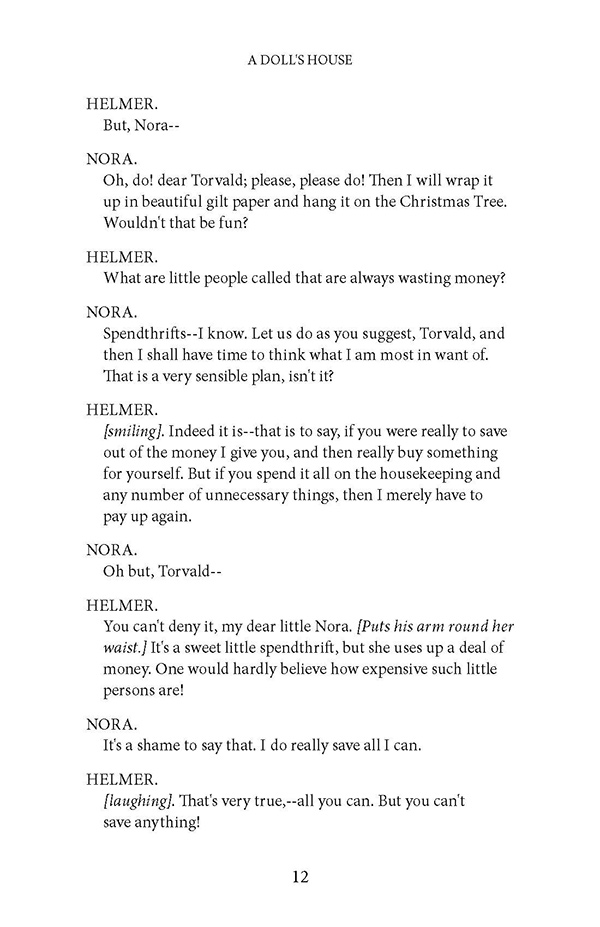 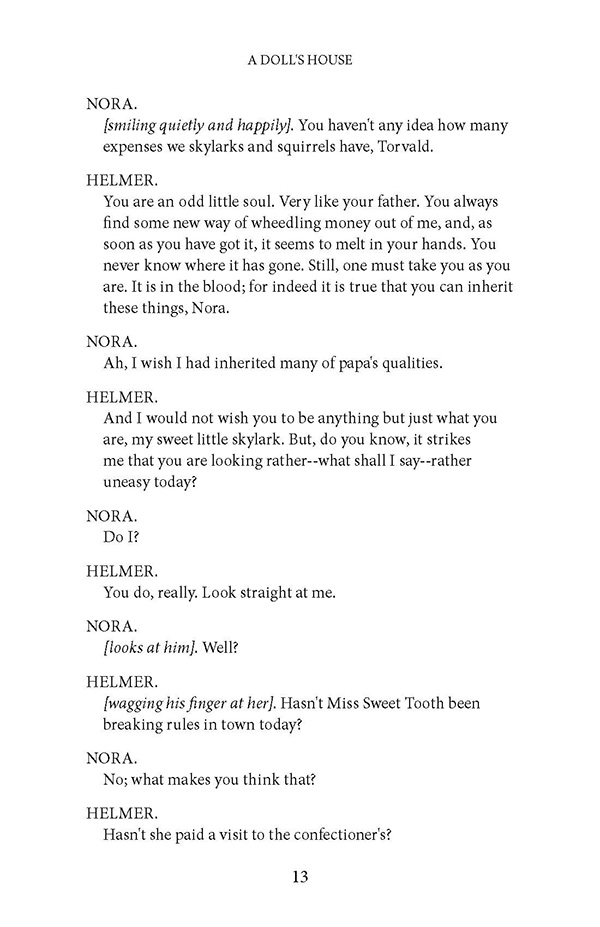 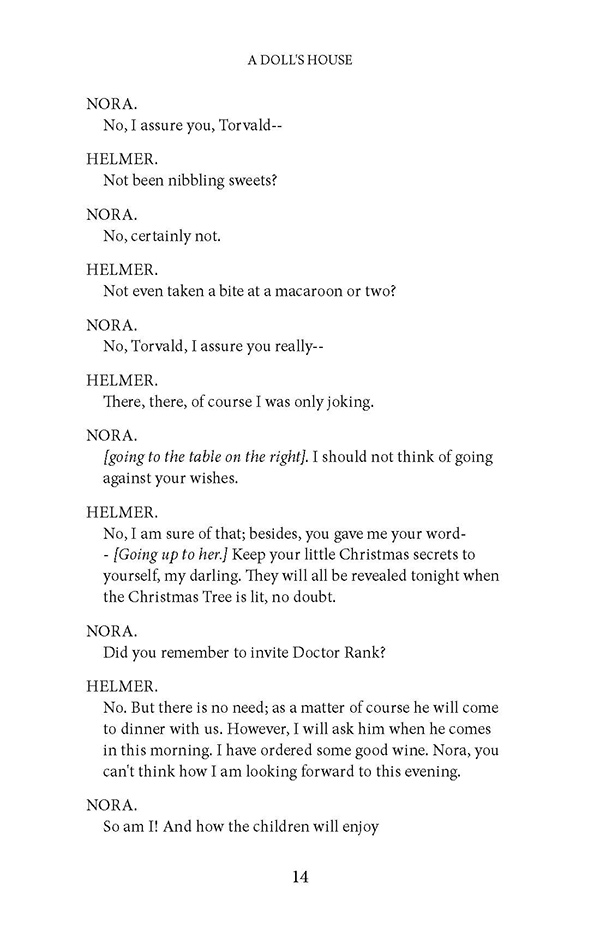 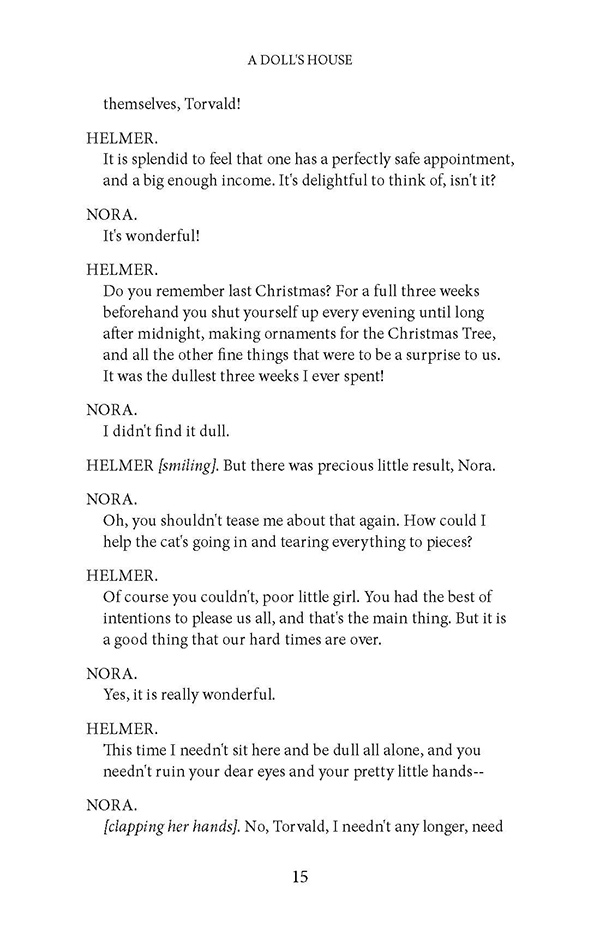 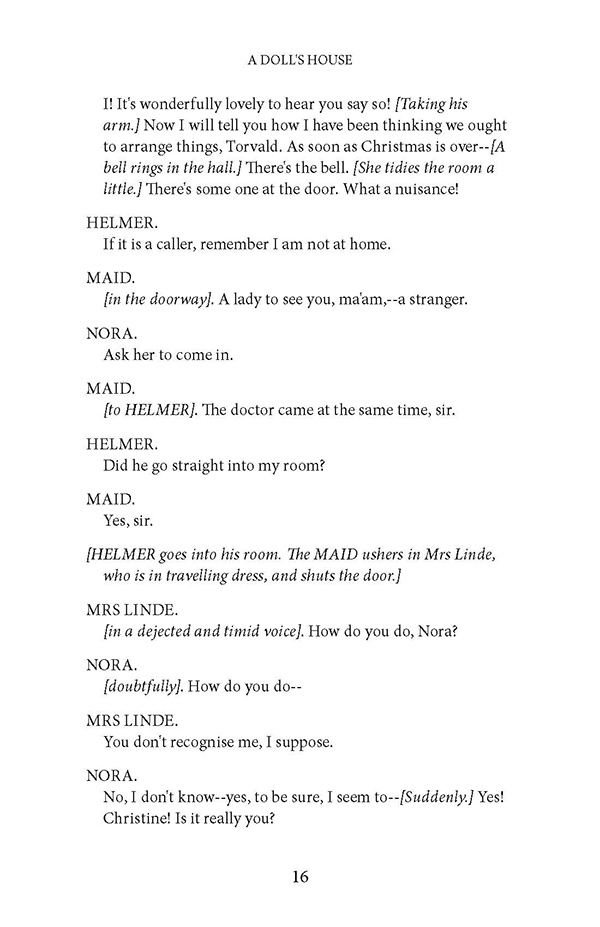 This play significantly explores female identity, societal expectations and challenges the roles traditional to men and women in marriage. Set in Norway during the late 19th century, its reception was controversial at the time of its release given the limited prospects for women in society.

Read & Co. Classics presents this brand new edition of Ibsen’s play, “A Doll’s House” (1879). The play significantly explores female identity and societal expectations, themes later expanded in “Hedda Gabler” (1891), and challenges the roles traditional to men and women in marriage. Set in Norway during the late 19th century, its reception was controversial at the time of its release given the limited prospects for women in society. Henrik Ibsen (1828-1906) was a Norwegian poet and theatre director, and is considered to be one of the greatest playwrights of his time. Despite involvement in theatre production and writing throughout his youth, Ibsen did not achieve significant critical success until his thirties through such plays as ”Brand” (1865) and “Peer Gynt” (1867). Many consider him instrumental in the development of Modernism and Realism in theatrical practice.

He became an apothecary's apprentice in the little town of Grimstad, being forced to earn a living owing to the impoverished condition of his family, but was determined not to ignore any possibility of obtaining an education by reading and study. His opposition to convention at first took the form, so common among young persons, of an avowed advocacy of the wicked and irregular, expressed in the thought that if he should be destined ever to perform a great deed, it would necessarily be a “deed of night,” and in his occupation with the study of the subversive characters of history, including chiefly Catiline, who became the hero of his first play (Catilina, 1850).

At Christiania, Ibsen attended a preparatory school in order to prepare for the medical school of the university. He failed in the entrance examinations, however, and undertook the publication, together with two other young men (Aasmund O. Vinje and the bibliographer, Batten-Hansen), of an unsuccessful weekly, Andhrimnir, Ibsen's contributions to this paper were short satires and lyrics. He was also much interested in Old Scandinavian history and legend, and began to write a number of dramas on themes connected with these legends, not uninfluenced by the works of Oehlenschläger and H. Hertz, the first of which is Kæmpehöjen (The Warrior's Grave, 1850), which had three performances at Christiania and was later printed serially in a Bergen newspaper (1854). In 1851 the violinist Ole Bull obtained for him the position of manager in the National Theatre at Bergen, which he held until 1857. Very important for Ibsen's artistic development was the trip which he undertook in 1852, under instructions from the Bergen theatre, to inspect the theatres of Dresden and Copenhagen, which were then managed by Devrient and L. Heiberg, respectively. His chief duty in connection with the theatre at Bergen was to produce an original play for performance each year on the anniversary of the theatre's foundation (2 January). The 1855 play was Fru Inger til Östraat (Lady Inger of Östraat, dealing with the events preceding the Reformation in Norway). In 1856 came Olaf Liljekrans (not printed until 1898, and then only in German, as a part of the nine-volume edition edited by Georg Brandes for S. Fischer, Berlin), and in 1857, Gildet paa Solhaug (The Banquet of Solhaug), a drama from the life of the Norwegian people in the 14th century. From 1857 until the bankruptcy of the Norwegian Theatre at Christiania, in 1864, Ibsen held the post of manager at that institution. In this period he produced only three plays, Hærmændene paa Helgeland (1868) (introduced to the English and American stage a few years ago by Ellen Terry; The Vikings at Helgoland), a pregnant, intense, laconic tale of Icelandic family feuds, taken from the Saga of Sigurd, and written in a prose not unlike that of the Icelandic sagas; Kjærlighedens Komedie (The Comedy of Love, 1862). a rimed satiric play dealing with social conditions; and Kongsemnerne (The Pretenders, 1864), another study of Norwegian history, interesting chiefly in that it presents a picture of self-confidence and moral responsibility in their struggle with laxity and irresoluteness, as personified in the persons of King Hakon and Jarl Skuli. In 1864 Ibsen was so fortunate as to obtain a traveling scholarship, and from this time until 1891 he spent almost all his time in foreign countries, where most of his great plays were to be produced, residing chiefly at Rome, Dresden and Munich. The larger, freer, more cosmopolitan life of Europe gave Ibsen a larger outlook than the narrow parochial atmosphere of the small Norwegian city, but he now turned to Norwegian themes with a greater intensity and vigor than before, treating them now as universal in their appeal; no dramatist ever limited himself so completely to his own country in his choice of subject, and none ever treated all his subjects so absolutely from the purely human point of view. Brand (1866) and Peer Gynt (1867) are the first of his great plays. They are the last plays Ibsen wrote before discarding verse. Brand exposes the danger and destructiveness of the idealist who would force others to live according to his ideals, while Peer Gynt satirizes the idealist who constructs a world only for himself and shuts all others out of it.

In 1869 came De unges forbund (The League of Youth), a modern social comedy exposing the knavery of conscienceless political agitators and inaugurating the long line of social dramas, dealing with vital and concrete problems of every-day life, to which Ibsen was to devote the rest of his active labors. Once only (in his next play, Emperor and Galilean, an enormous tragedy in two parts, of five acts each) he was to work again in the field of history, producing an impressive study of the clash of free will and historic preordination, impersonated in the character of Julian the Apostate, in his vain effort to restore paganism at a time when the world was already ripe for Christianity. It is the remaining plays, produced after Kejser og Galilæer, with which readers are chiefly acquainted, which make Ibsen immortal, and which have entirely remolded the dramatic literature of the world since their appearance. They are Samfundets Stötter (Pillars of Society, 1877), Et Dukkehjem (A Doll's House, 1879), Gjengangerne (Ghosts, 1881); En Folkefiende (An Enemy of the People, 1882); Vildanden (The Wild Duck, 1884); Rosmersholm (1886); Fruen fra Havet (The Lady from the Sea, 1888); Hedda Gabler (1890); Bygmester Solness (The Master Builder, 1892); Lille Eyjolf (1894); John Gabriel Borkman (1896); Naar vi döde vaagner (When We Dead Awaken, 1900). These 12 plays are a complete comédie humaine, a comprehensive indictment of the evils necessarily associated with a disordered society, beginning with Pillars of Society, which is a sort of headline synopsis, in cruder form, of all the plays that follow, and running on through play after play, each taking up and pursuing with merciless clearness some problem outlined but not completely disposed of in its predecessor. Thus, A Doll's House puts the problem of the devoted self-sacrificing wife whose husband values respectability and social position above her affection, and who deserts him that she may know what life really is; it caused Ibsen's provincial critics to ask: “Why did she not remain? Was not her first duty with her two children?” Ibsen accordingly answered this question in Ghosts, the next play, in which, in three  acts, he presents the case of a wife who remained with her husband and child. The husband's respectability cloaked a boundless dissoluteness, and the disease contracted in one of his dissipations causes the son to go insane many years later. The disclosure by Ibsen of these evils of modern family life led one of his critics to accuse him of being an “enemy of society,” and Ibsen's next play, An Enemy of the People, in which an honest physician calls attention to the infected condition of the waters, from the supposed healing qualities of which his fellow-townsmen earn their living, is his answer. The honest Dr. Stockmann is termed an “enemy of the people” and finally driven out of town. Unqualified truth-telling, even when it may be personally unprofitable, would appear to be the lesson of this play, but in the Wild Duck his thesis seems to be, as Shaw, his most brilliant interpreter puts it, “that a truth-teller who cannot hold his tongue on occasion may do as much mischief as a whole university full of trained liars.” The student wishing a complete interpretation of Ibsen and of the connection between his social plays is referred to G. B. Shaw's, The Quintessence of Ibsenism, from which the above quotation is taken (1st ed., 1891); there is also an interesting but rather crabbed essay on Hedda Gabler by Henry James. The understanding of the later plays, beginning with Rosmersholm (1886), is rendered somewhat difficult by the introduction of numerous symbolic elements. The tone becomes one of bitter resignation, of regret at having wasted opportunities for natural living and real enjoyment.

The last 15 years of his life were spent at Christiania, the last seven years in increasing mental disturbance, which indicated that Ibsen's mind was slowly weakening. In 1900, after the last play, When We Dead Awaken, was finished (Ibsen seems to have intended it to be his last, for he called it “A Dramatic Epilogue”), a bronze statue (by Sinding) was erected to him in Christiania.

The reception of Ibsen's plays in Norway and in foreign countries was at first uniformly hostile. The venomous nature of the attacks by professional literary critics is best evidenced by the quotations given in Shaw's book from contemporary London newspapers, and is paralleled only by the similar outbursts called forth from the musical critics by the first of the epoch-making innovations of Richard Wagner. The New York press greeted the first American performance of Ghosts in 1902 with equal hostility. But Ibsen's popularity long before his death was already so great that the later plays appeared simultaneously in all the capitals of Europe, translations into the important languages having been prepared before the publication of the original.

-A biography by Jacob Wittmer Hartmann,
The Encyclopedia Americana, 1920

Be the first to review “A Doll’s House” Cancel reply