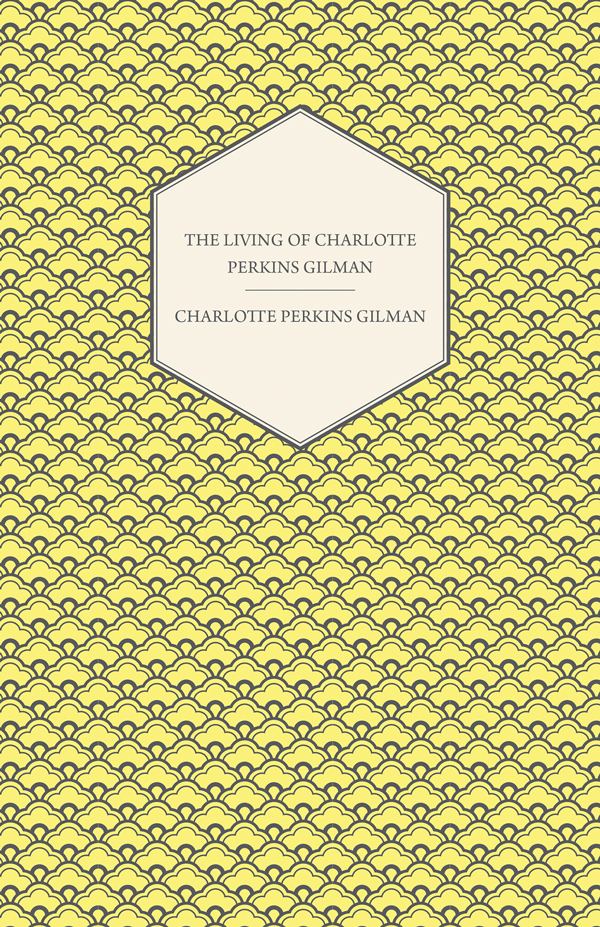 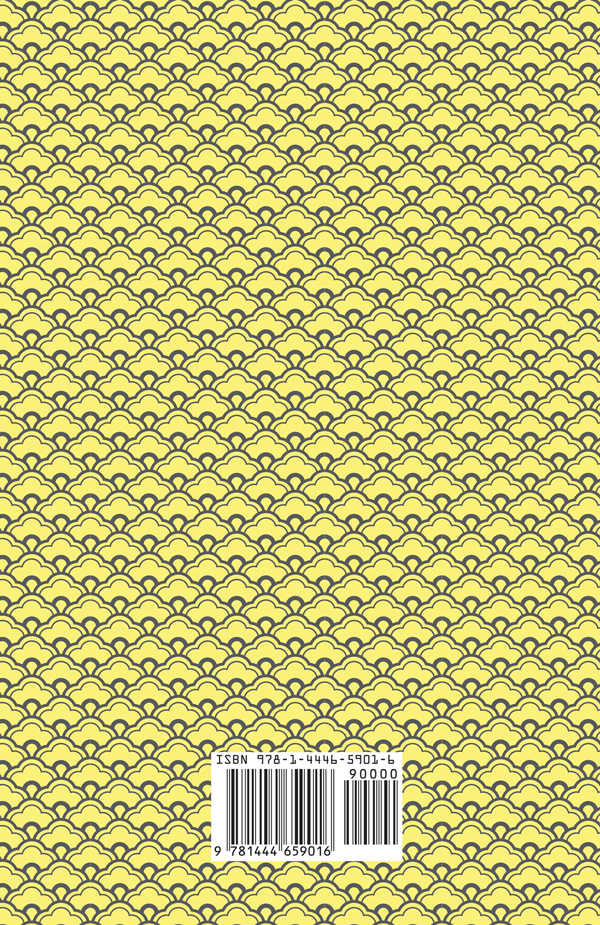 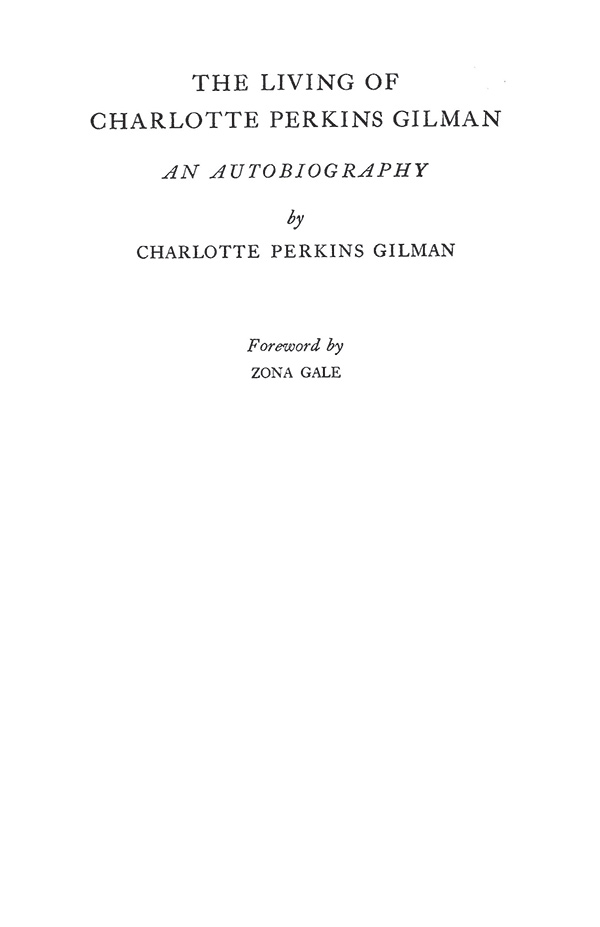 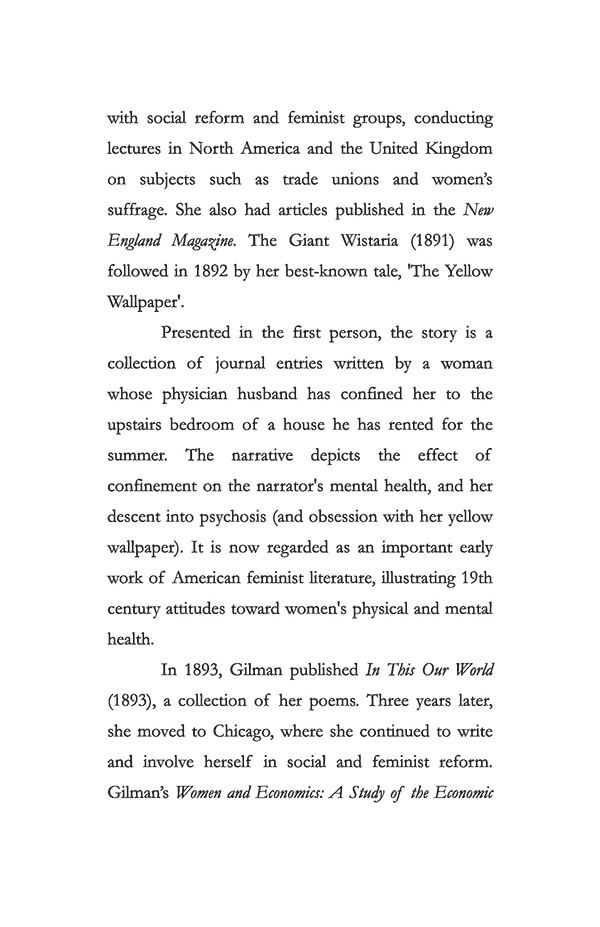 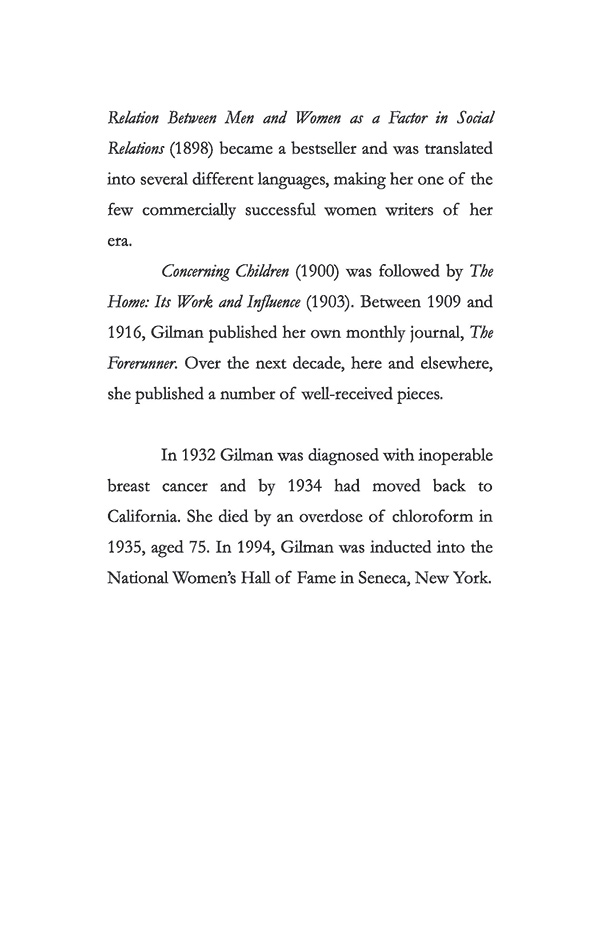 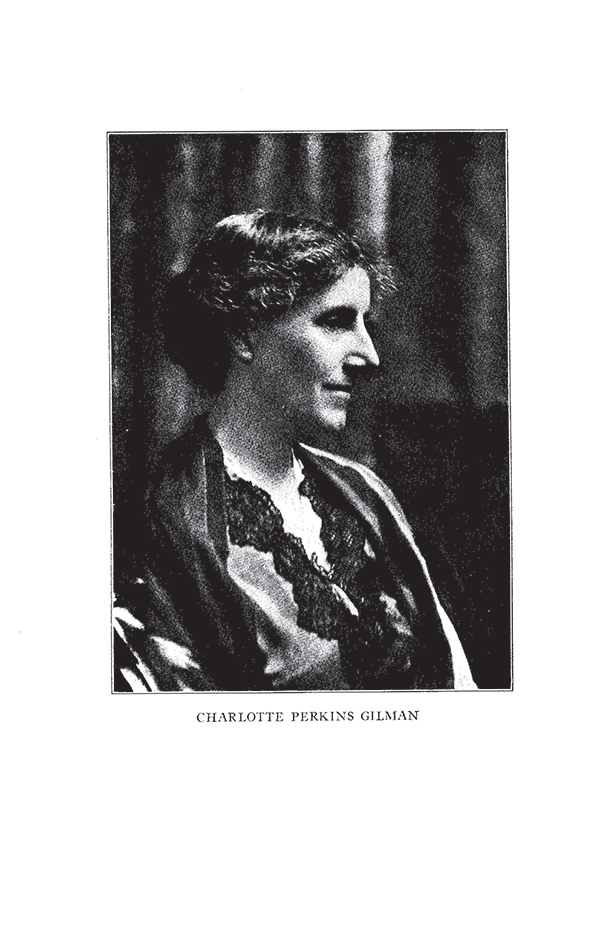 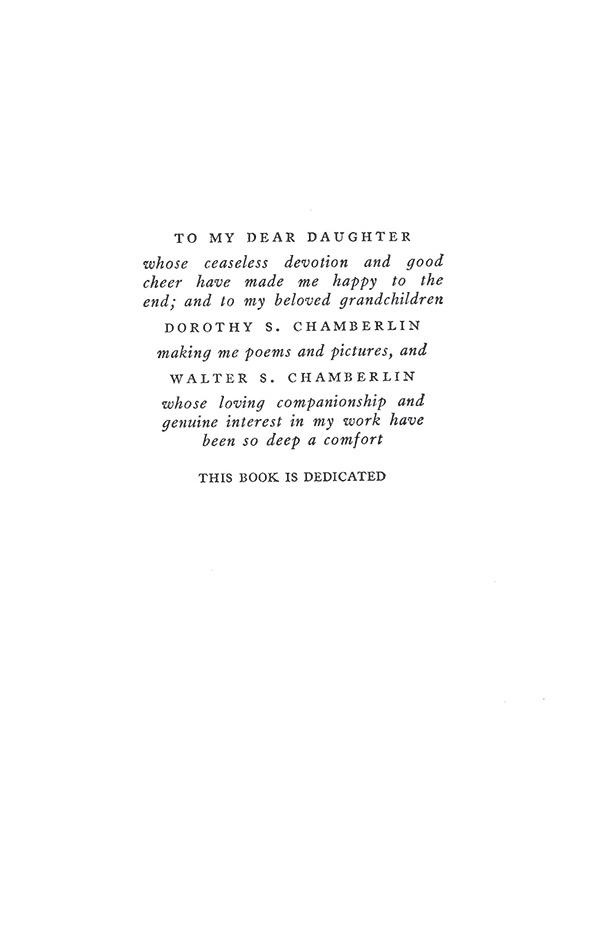 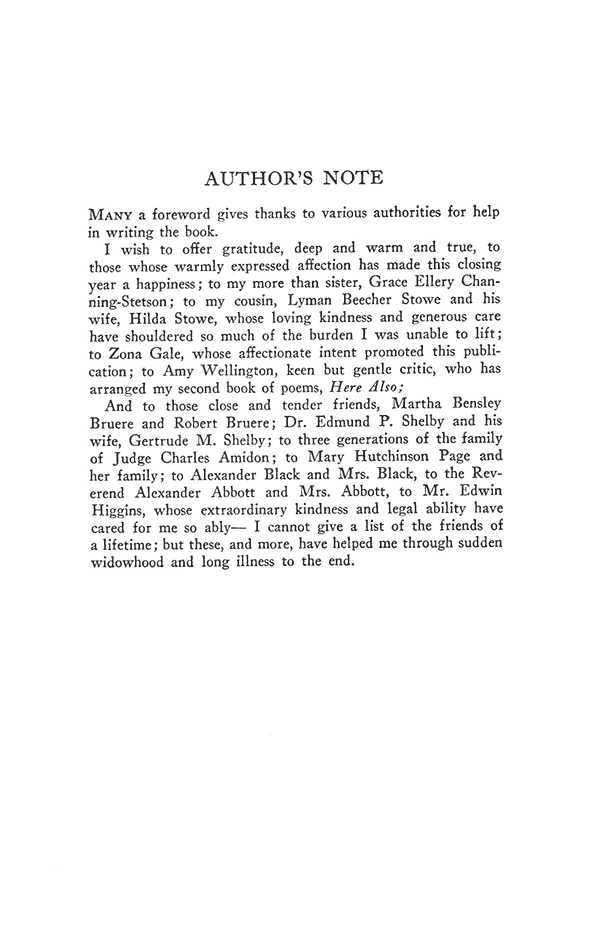 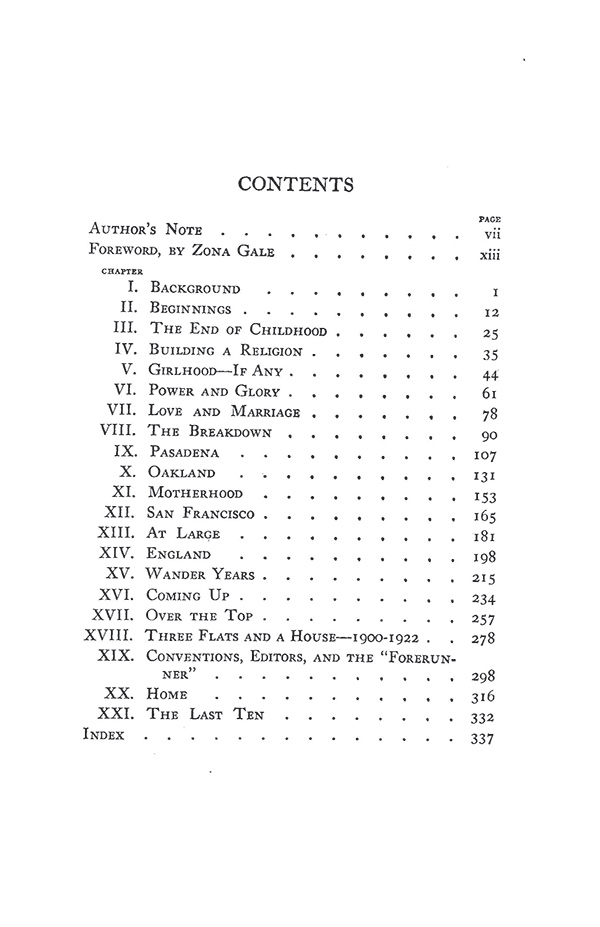 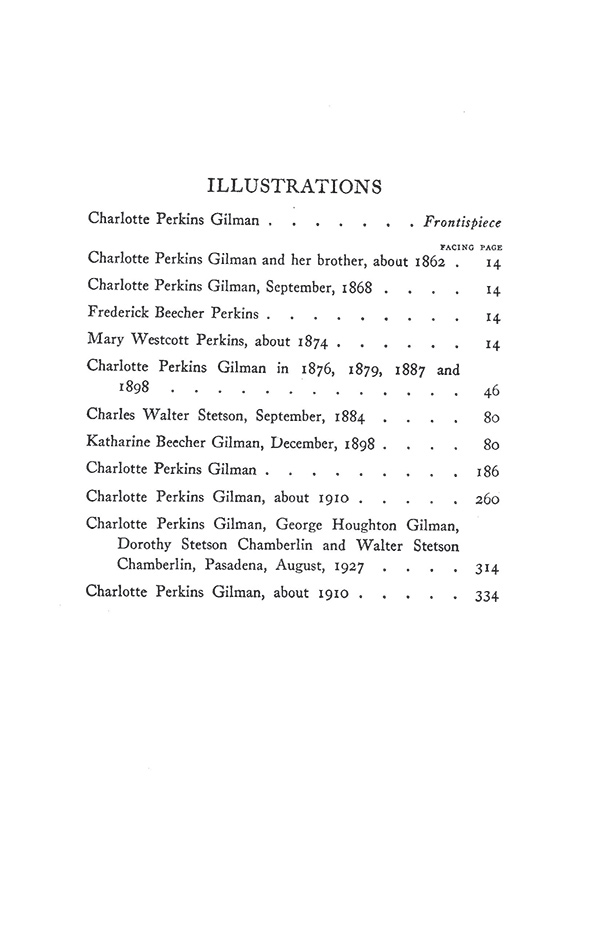 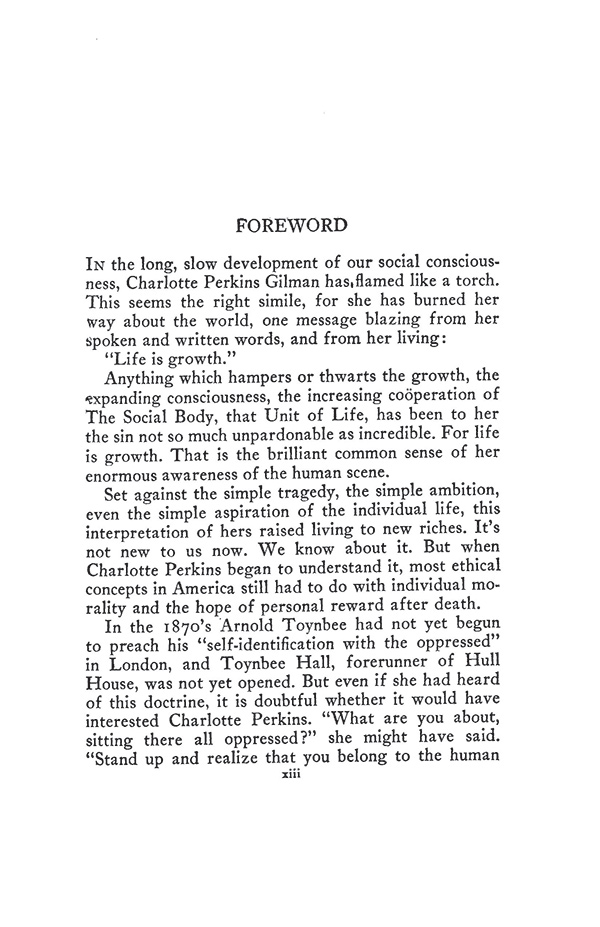 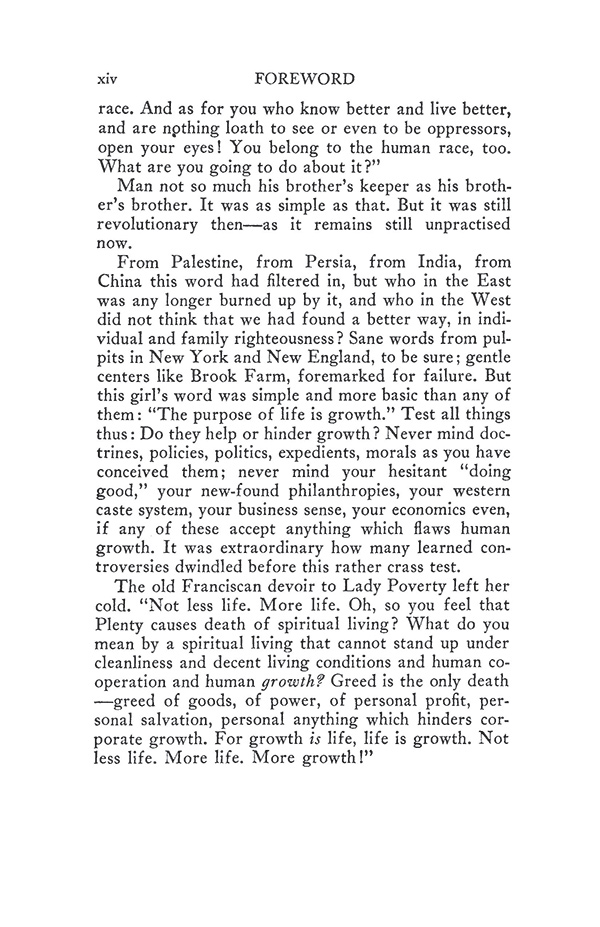 Originally published in 1935. It is the autobiography of the American sociologist, novelist and poet who is best remembered for her semi-autobiographical short story ‘The Yellow Wallpaper’.

This early work by Charlotte Perkins Gilman was originally published in 1935. It is the autobiography of the American sociologist, novelist and poet who is best remembered for her semi-autobiographical short story ‘The Yellow Wallpaper’.

Charlotte Perkins Gilman was born Charlotte Anna Perkins in Hartford, Connecticut, USA in 1860. She was the great niece of Henry Ward Beecher and his sister Harriet Beecher Stowe (the author of Uncle Tom’s Cabin). Gilman's father absconded when Gilman was very young, and the family moved about often, living in temporary lodgings or with various relatives for a number of years. Gilman attended the Rhode Island School of Design and after graduating went on to teach and design greeting cards.

In 1884, Gilman married. Soon afterwards, she gave birth to a daughter, before slipping into a period of major depression (possibly post-partum). This nervous breakdown affected her for years to come. In 1887, Gilman entered a sanitorium in Philadelphia, where she gathered much of the material that would later make up her famous short story The Yellow Wallpaper.

In 1888, after separating from her husband, Gilman moved to California. She became involved with social reform and feminist groups, conducting lectures in North America and the United Kingdom on subjects such as trade unions and women’s suffrage. She also had articles published in the New England Magazine. The Giant Wistaria (1891) was followed in 1892 by her best-known tale, The Yellow Wallpaper.

Presented in the first person, the story is a collection of journal entries written by a woman whose physician husband has confined her to the upstairs bedroom of a house he has rented for the summer. The narrative depicts the effect of confinement on the narrator's mental health, and her descent into psychosis (and obsession with her yellow wallpaper). It is now regarded as an important early work of American feminist literature, illustrating 19th century attitudes toward women's physical and mental health.

In 1893, Gilman published In This Our World (1893), a collection of her poems. Three years later, she moved to Chicago, where she continued to write and involve herself in social and feminist reform. Gilman’s Women and Economics: A Study of the Economic Relation Between Men and Women as a Factor in Social Relations (1898) became a bestseller and was translated into several different languages, making her one of the few commercially successful women writers of her era.

Concerning Children (1900) was followed by The Home: Its Work and Influence (1903). Between 1909 and 1916, Gilman published her own monthly journal, The Forerunner. Over the next decade, here and elsewhere, she published a number of well-received pieces.

In 1932 Gilman was diagnosed with inoperable breast cancer and by 1934 had moved back to California. She died by an overdose of chloroform in 1935, aged 75. In 1994, Gilman was inducted into the National Women’s Hall of Fame in Seneca, New York.

Down and Out in Paris and London

Selections from the Prose and Poetry of Walt Whitman

Work: A Story of Experience