Log In
This book can be found in:
Society & Social Sciences | Crime & Criminology
History | Women in History 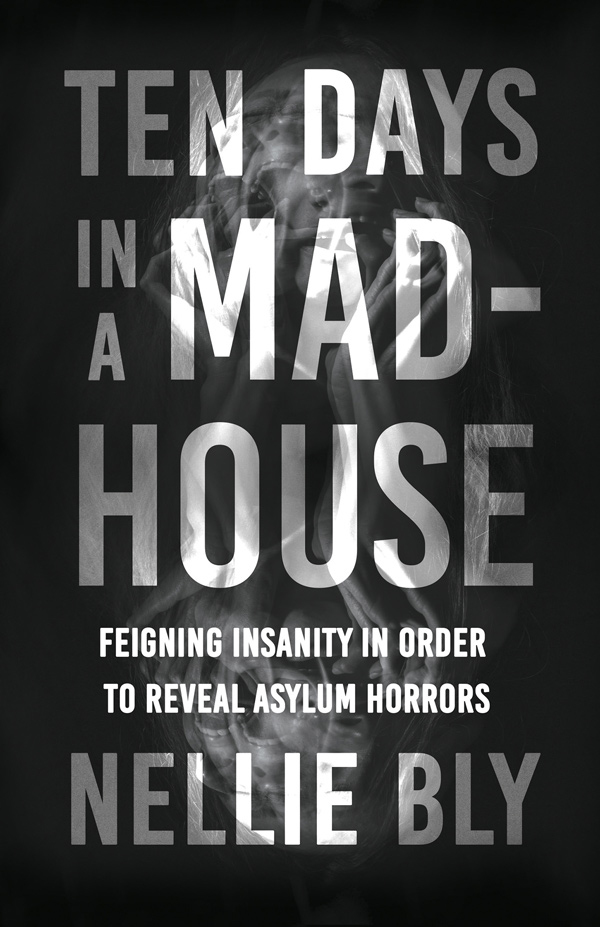 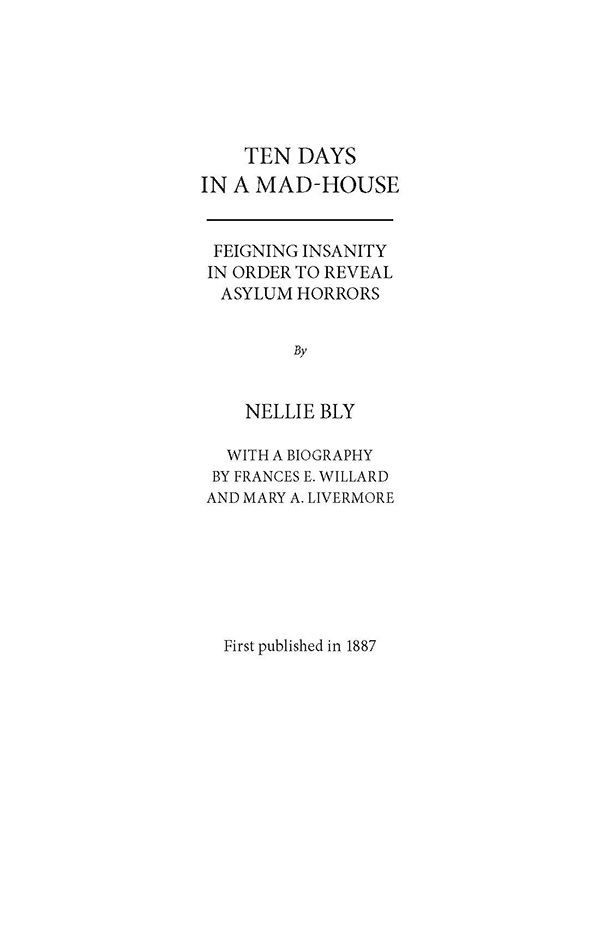 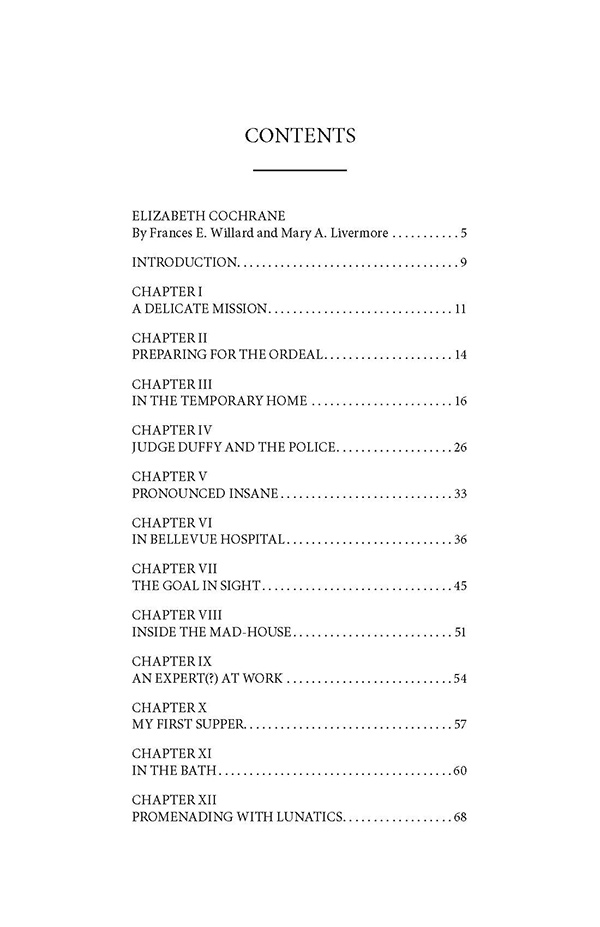 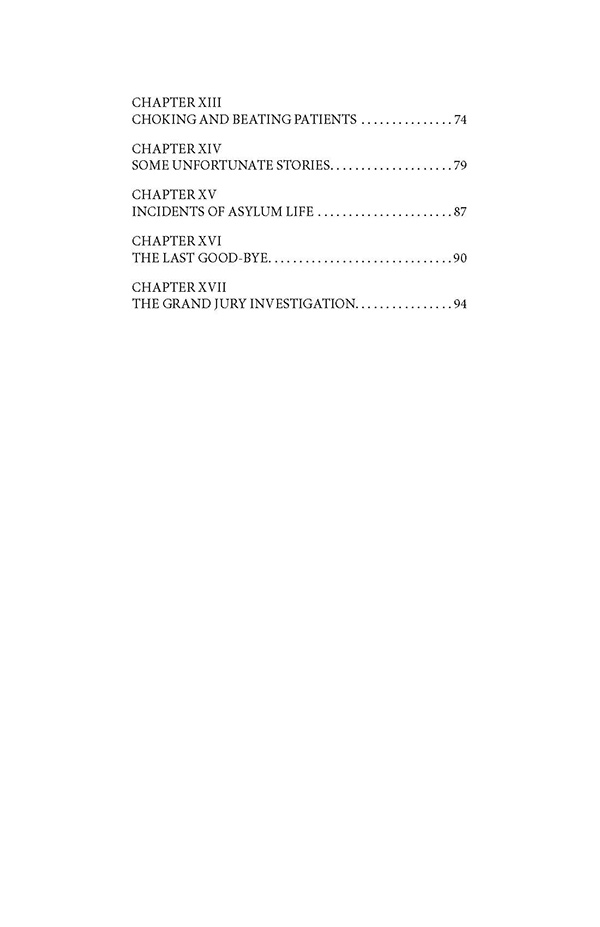 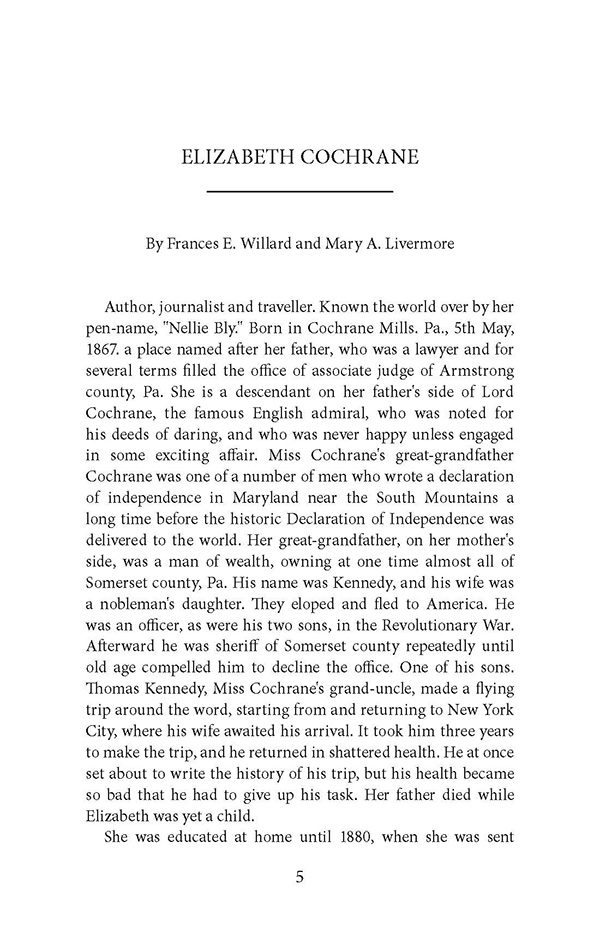 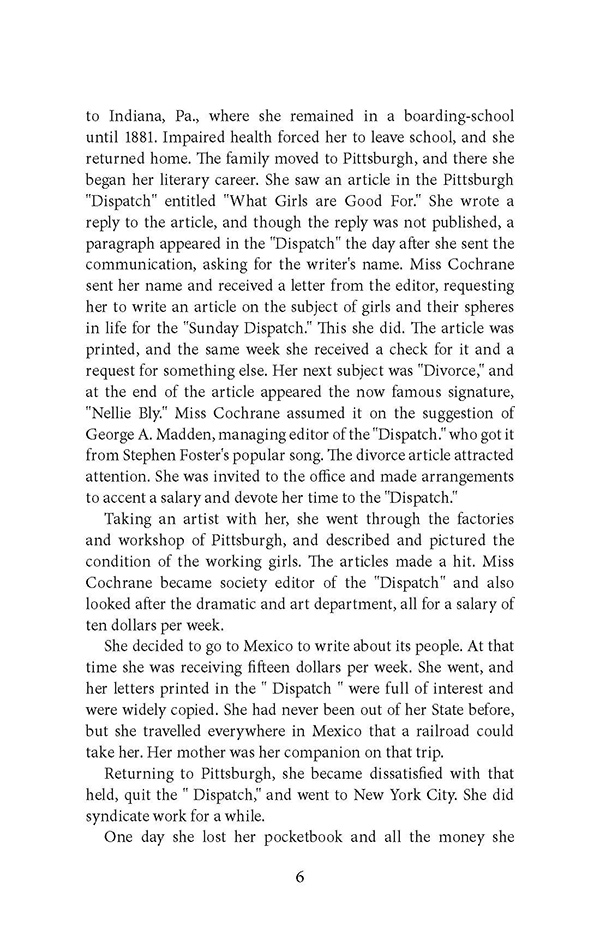 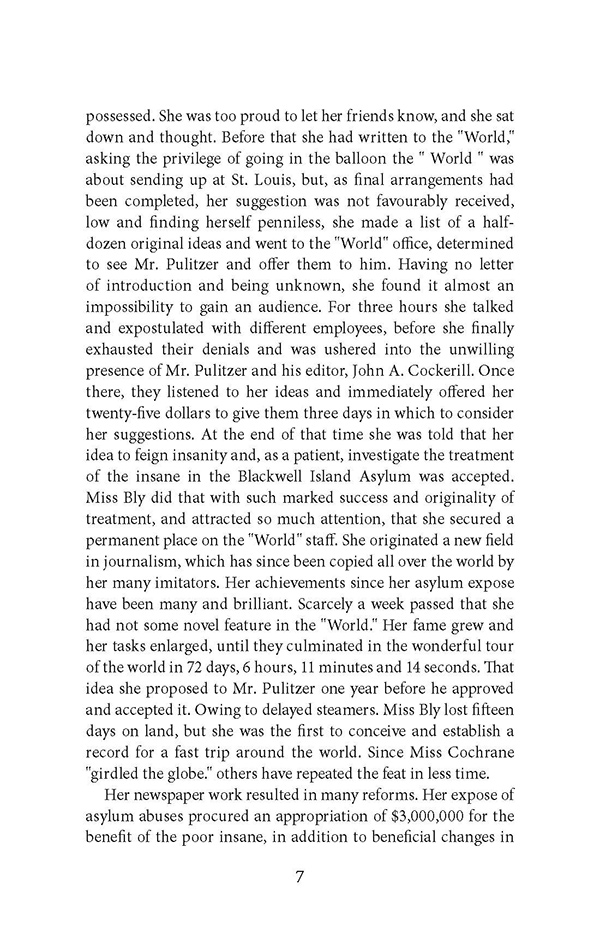 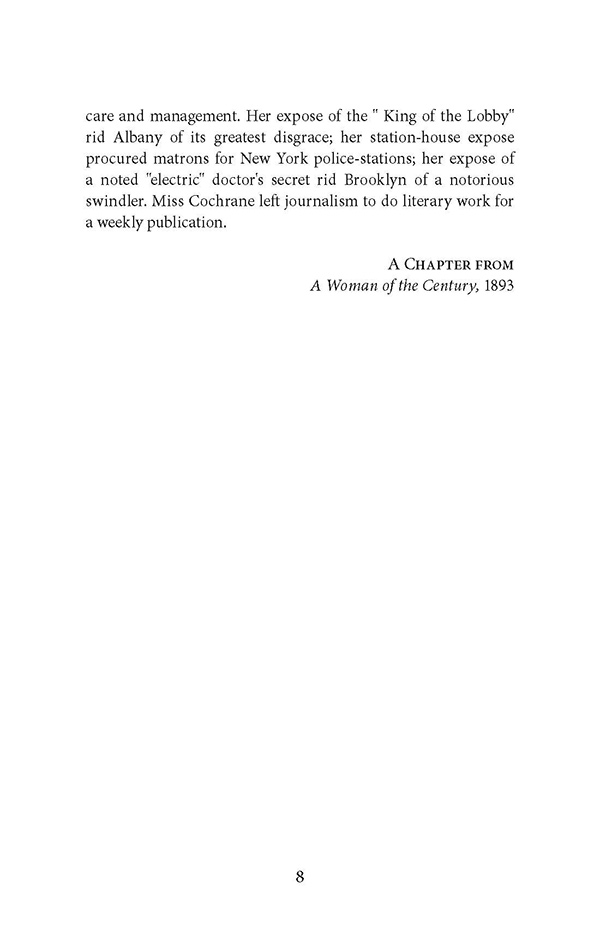 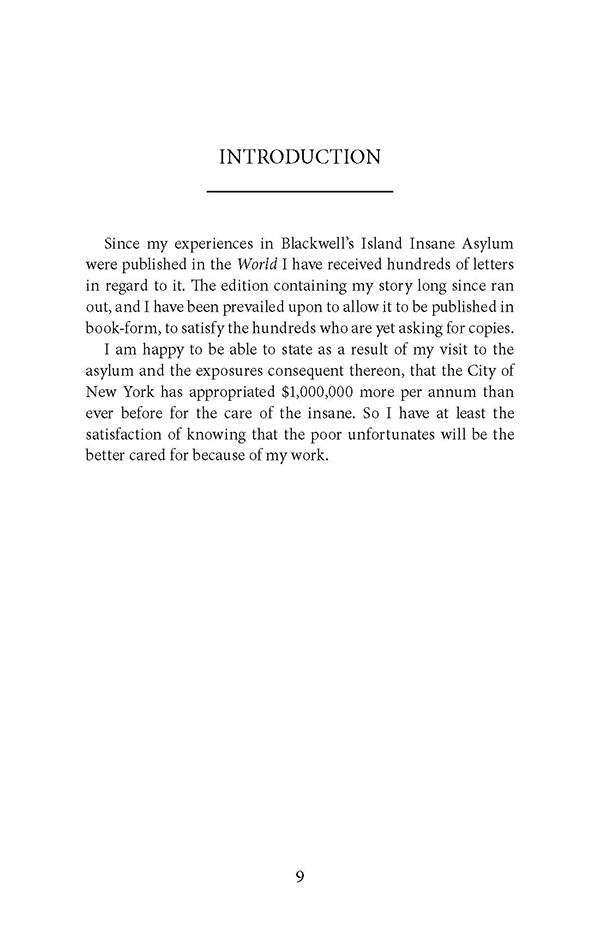 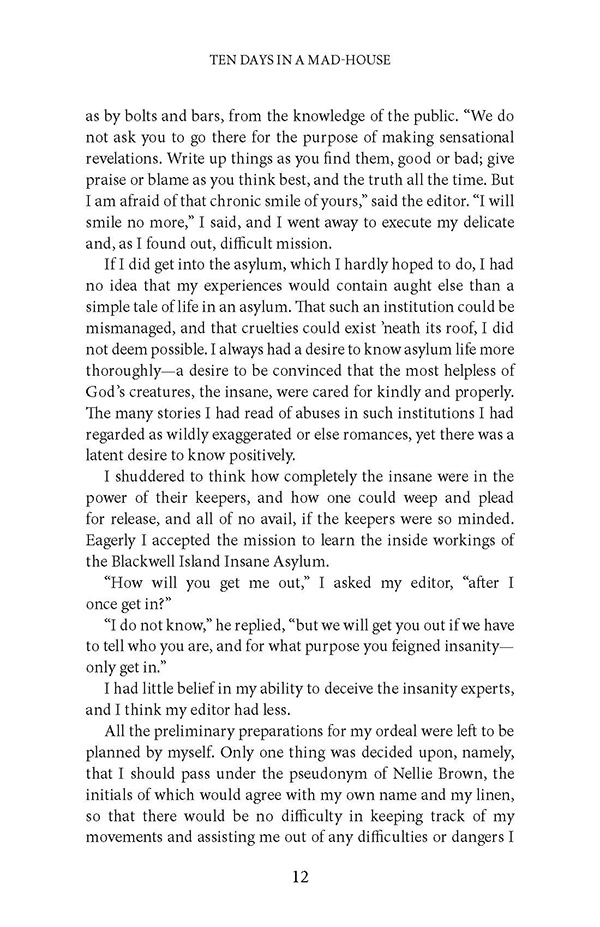 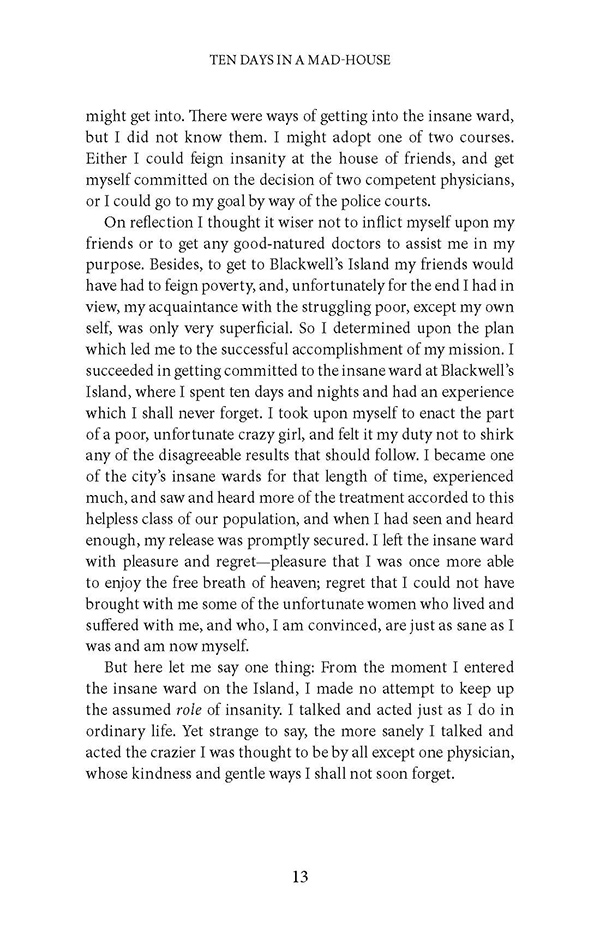 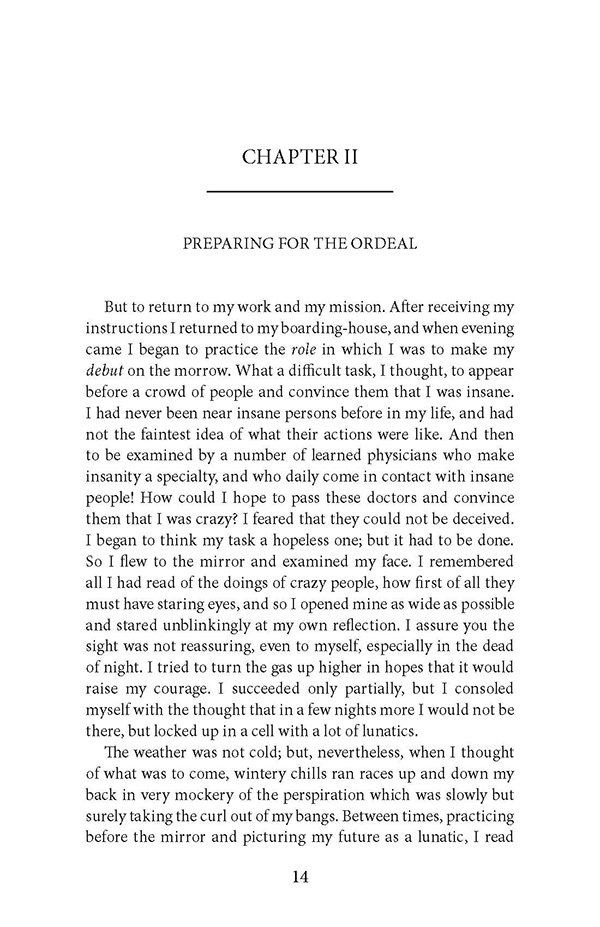 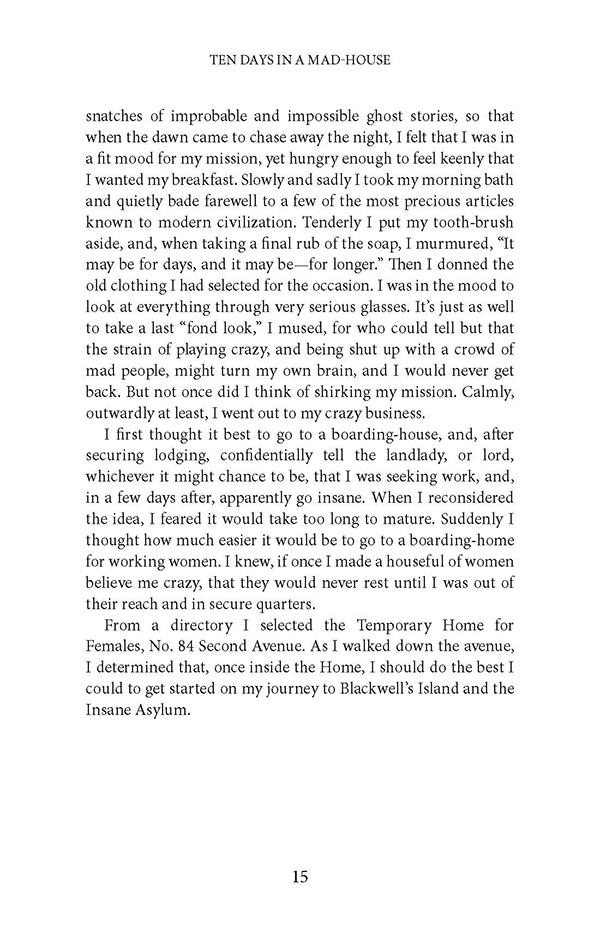 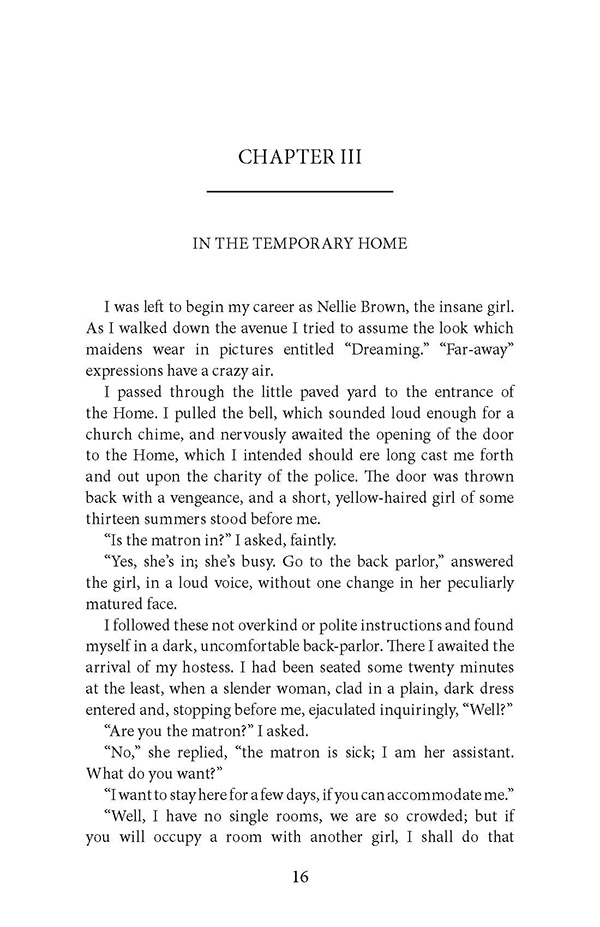 Seaman’s ground-breaking exposé of an asylum which she infiltrated by feigning insanity. Leading to a grand jury investigation, as well as an entirely new style of investigative journalism.

“Ten Days in a Mad-House” is an 1887 work by American journalist Elizabeth Seaman. Originally published as a series of articles for the New York World, the book contains Seaman’s ground-breaking exposé of an asylum which she infiltrated by feigning insanity. “Ten Days in a Mad-House” led to a grand jury investigation and increased funding for the Department of Public Charities and Corrections, as well as an entirely new style of investigative journalism. Elizabeth Cochrane Seaman (1864–1922), also known as Nellie Bly, was an American industrialist, journalist, charity worker, and inventor famous for her 72-day trip around the world in the footsteps of the fictional Phileas Fogg. Other notable works by this author include: “Six Months in Mexico” (1888), “The Mystery of Central Park” (1889), and “Nellie Bly’s Book: Around the World in Seventy-two Days” (1890). Read & Co. Books is republishing this classic journalistic work in a new edition complete with an introductory biography by Frances E. Willard and Mary A. Livermore.

Elizabeth Cochrane was an author, journalist and traveller. Known the world over by her pen-name, "Nellie Bly." Born in Cochrane Mills. Pa., 5th May, 1867. a place named after her father, who was a lawyer and for several terms filled the office of associate judge of Armstrong county, Pa. She is a descendant on her father's side of Lord Cochrane, the famous English admiral, who was noted for his deeds of daring, and who was never happy unless engaged in some exciting affair. Miss Cochrane's great-grandfather Cochrane was one of a number of men who wrote a declaration of independence in Maryland near the South Mountains a long time before the historic Declaration of Independence was delivered to the world. Her great-grandfather, on her mother's side, was a man of wealth, owning at one time almost all of Somerset county, Pa. His name was Kennedy, and his wife was a nobleman's daughter. They eloped and fled to America. He was an officer, as were his two sons, in the Revolutionary War. Afterward he was sheriff of Somerset county repeatedly until old age compelled him to decline the office. One of his sons. Thomas Kennedy, Miss Cochrane's grand-uncle, made a flying trip around the word, starting from and returning to New York City, where his wife awaited his arrival. It took him three years to make the trip, and he returned in shattered health. He at once set about to write the history of his trip, but his health became so bad that he had to give up his task. Her father died while Elizabeth was yet a child.

She was educated at home until 1880, when she was sent to Indiana, Pa., where she remained in a boarding-school until 1881. Impaired health forced her to leave school, and she returned home. The family moved to Pittsburgh, and there she began her literary career. She saw an article in the Pittsburgh "Dispatch" entitled "What Girls are Good For." She wrote a reply to the article, and though the reply was not published, a paragraph appeared in the "Dispatch" the day after she sent the communication, asking for the writer's name. Miss Cochrane sent her name and received a letter from the editor, requesting her to write an article on the subject of girls and their spheres in life for the "Sunday Dispatch." This she did. The article was printed, and the same week she received a check for it and a request for something else. Her next subject was "Divorce," and at the end of the article appeared the now famous signature, "Nellie Bly." Miss Cochrane assumed it on the suggestion of George A. Madden, managing editor of the "Dispatch." who got it from Stephen Foster's popular song. The divorce article attracted attention. She was invited to the office and made arrangements to accent a salary and devote her time to the "Dispatch."

Taking an artist with her, she went through the factories and workshop of Pittsburgh, and described and pictured the condition of the working girls. The articles made a hit. Miss Cochrane became society editor of the "Dispatch" and also looked after the dramatic and art department, all for a salary of ten dollars per week.

She decided to go to Mexico to write about its people. At that time she was receiving fifteen dollars per week. She went, and her letters printed in the " Dispatch " were full of interest and were widely copied. She had never been out of her State before, but she travelled everywhere in Mexico that a railroad could take her. Her mother was her companion on that trip.

Returning to Pittsburgh, she became dissatisfied with that held, quit the " Dispatch," and went to New York City. She did syndicate work for a while.

One day she lost her pocketbook and all the money she possessed. She was too proud to let her friends know, and she sat down and thought. Before that she had written to the "World," asking the privilege of going in the balloon the " World " was about sending up at St. Louis, but, as final arrangements had been completed, her suggestion was not favourably received, low and finding herself penniless, she made a list of a half-dozen original ideas and went to the "World" office, determined to see Mr. Pulitzer and offer them to him. Having no letter of introduction and being unknown, she found it almost an impossibility to gain an audience. For three hours she talked and expostulated with different employees, before she finally exhausted their denials and was ushered into the unwilling presence of Mr. Pulitzer and his editor, John A. Cockerill. Once there, they listened to her ideas and immediately offered her twenty-five dollars to give them three days in which to consider her suggestions. At the end of that time she was told that her idea to feign insanity and, as a patient, investigate the treatment of the insane in the Blackwell Island Asylum was accepted. Miss Bly did that with such marked success and originality of treatment, and attracted so much attention, that she secured a permanent place on the "World" staff. She originated a new field in journalism, which has since been copied all over the world by her many imitators. Her achievements since her asylum expose have been many and brilliant. Scarcely a week passed that she had not some novel feature in the "World." Her fame grew and her tasks enlarged, until they culminated in the wonderful tour of the world in 72 days, 6 hours, 11 minutes and 14 seconds. That idea she proposed to Mr. Pulitzer one year before he approved and accepted it. Owing to delayed steamers. Miss Bly lost fifteen days on land, but she was the first to conceive and establish a record for a fast trip around the world. Since Miss Cochrane "girdled the globe." others have repeated the feat in less time.

Her newspaper work resulted in many reforms. Her expose of asylum abuses procured an appropriation of $3,000,000 for the benefit of the poor insane, in addition to beneficial changes in care and management. Her expose of the " King of the Lobby" rid Albany of its greatest disgrace; her station-house expose procured matrons for New York police-stations; her expose of a noted "electric" doctor's secret rid Brooklyn of a notorious swindler. Miss Cochrane left journalism to do literary work for a weekly publication.

A Chapter by Frances E. Willard and Mary A. Livermore,
A Woman of the Century, 1893

Women in Journalism – The Best of Nellie Bly