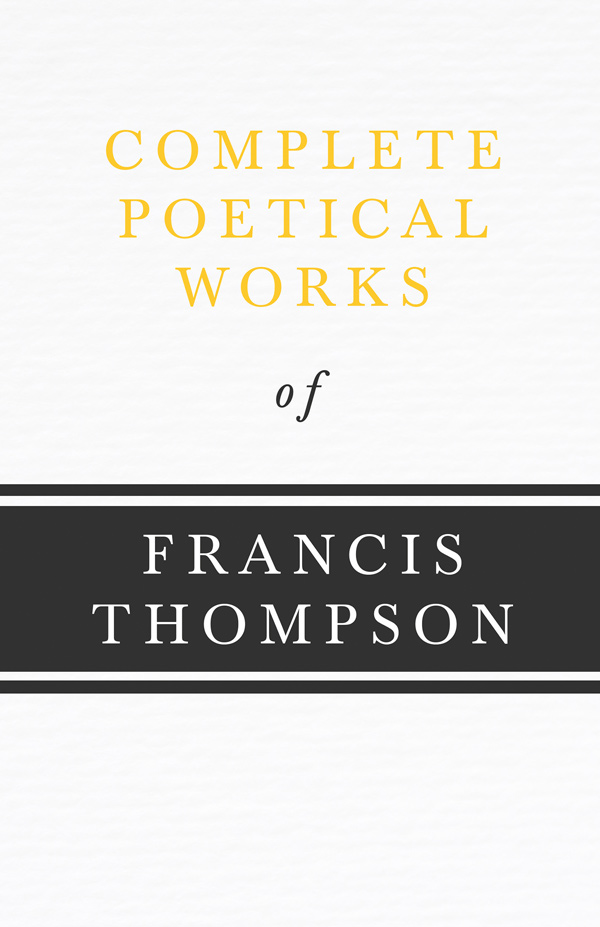 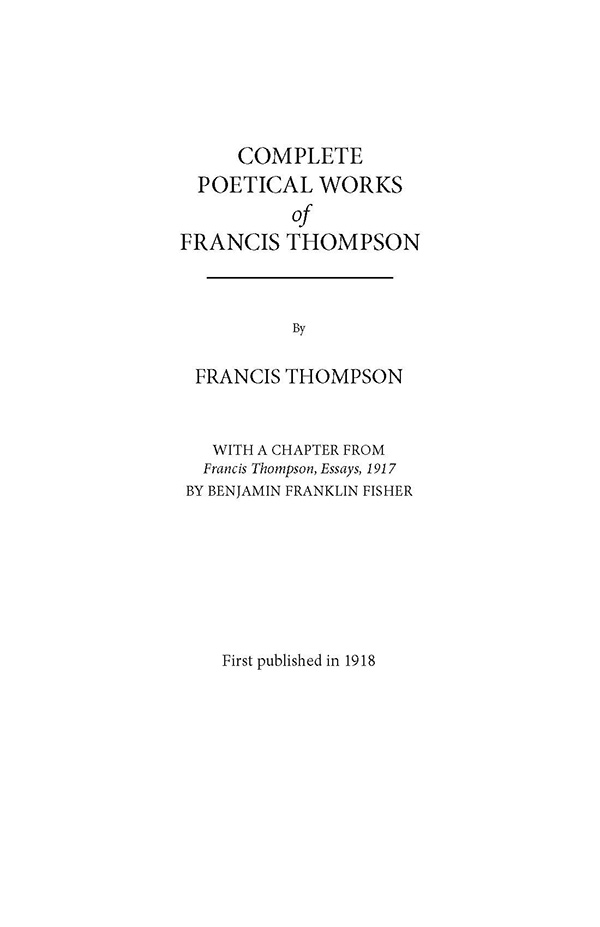 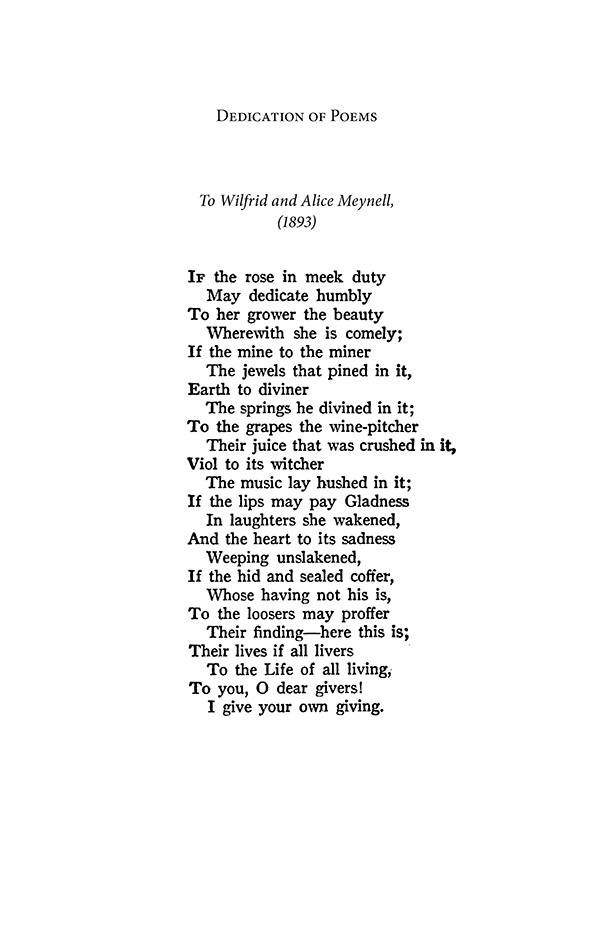 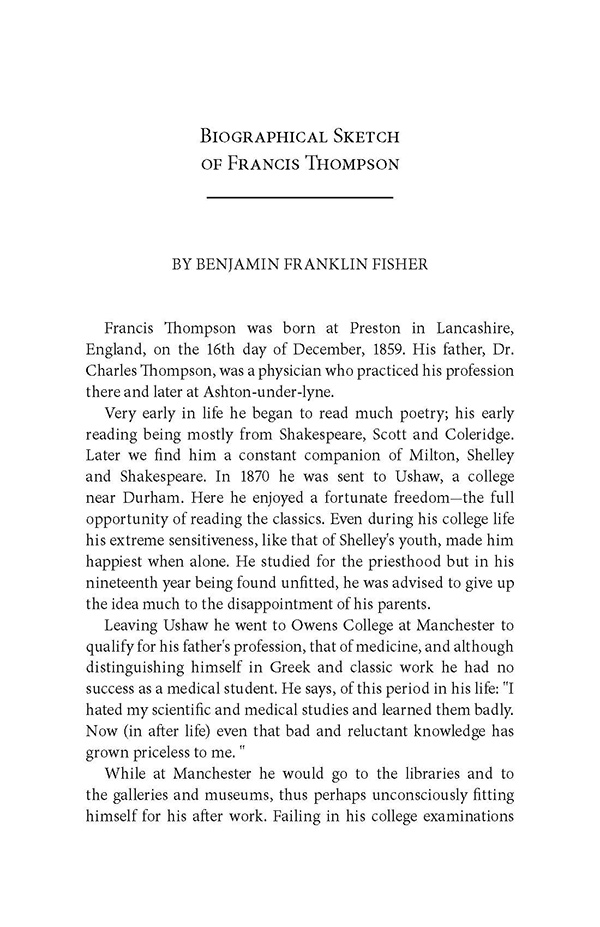 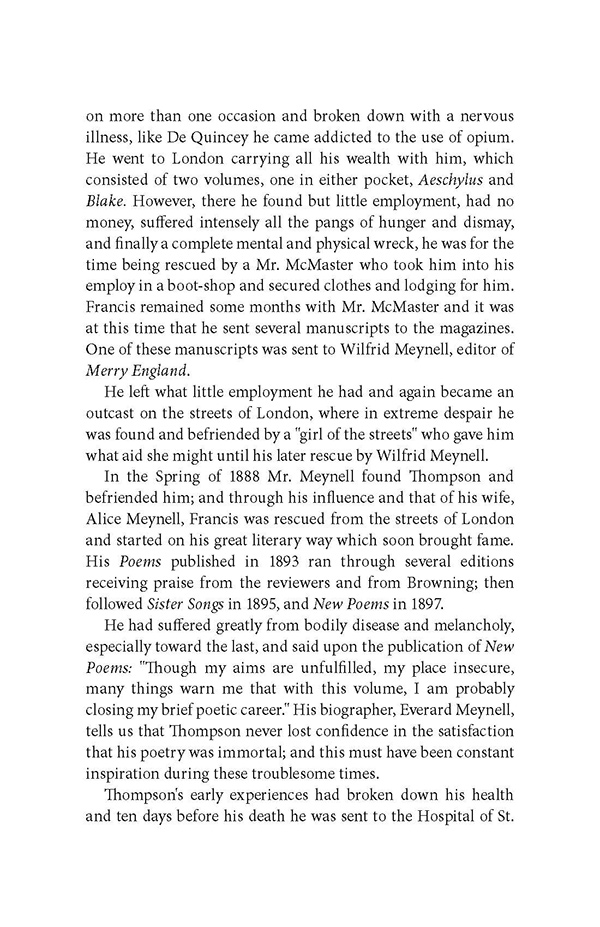 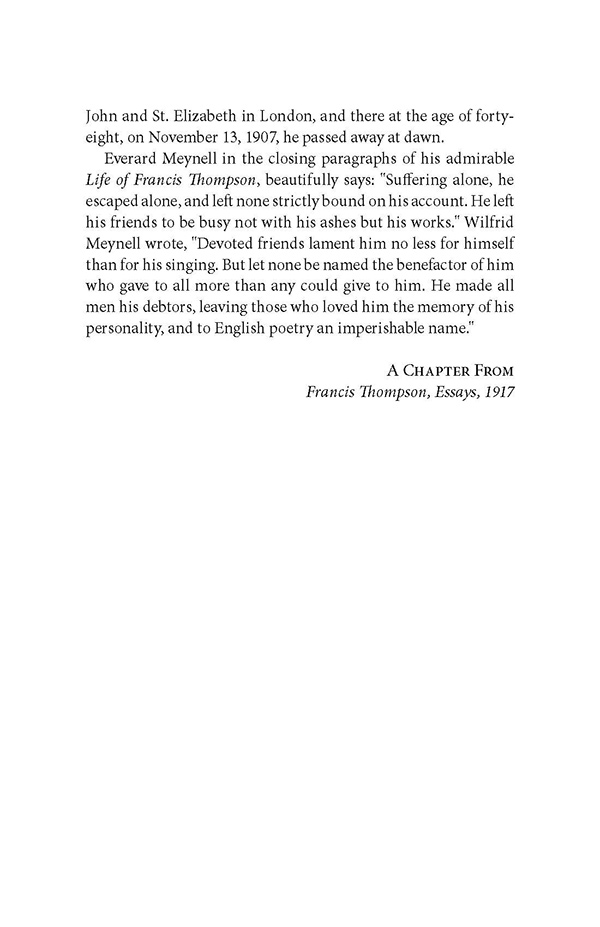 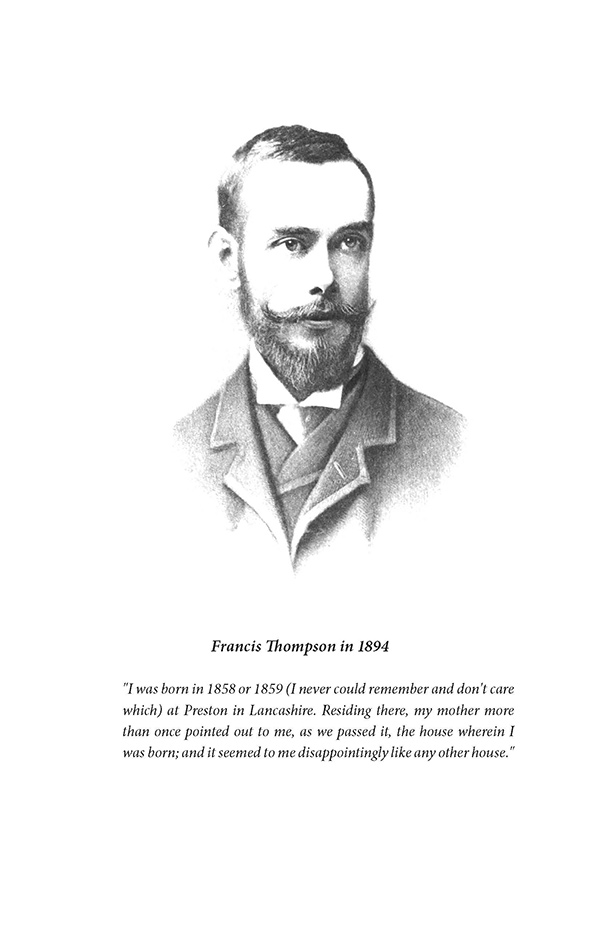 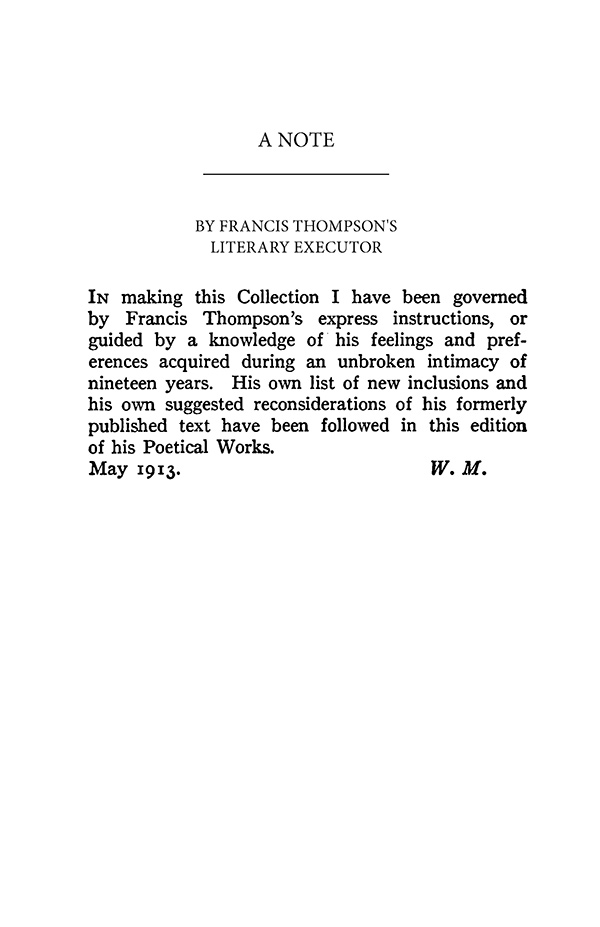 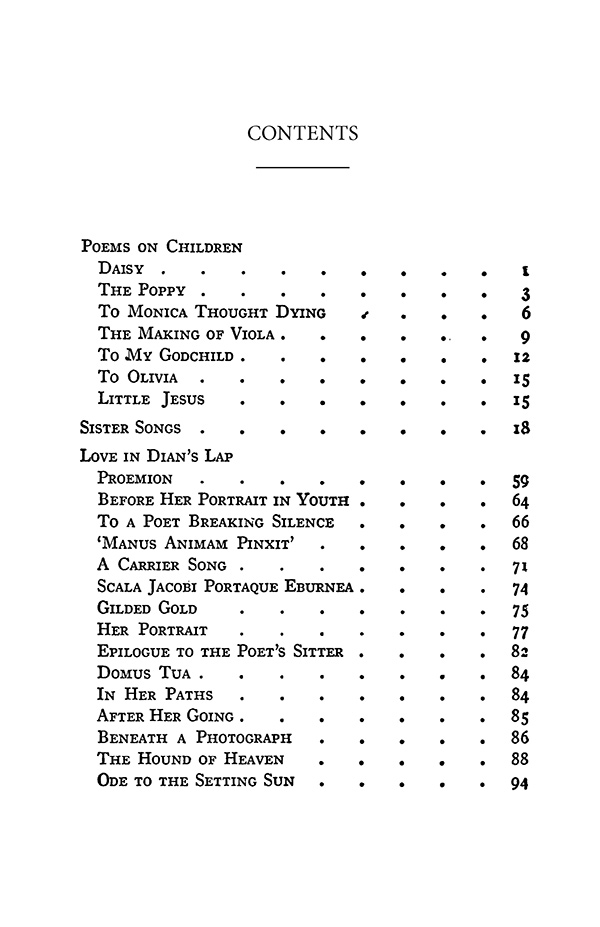 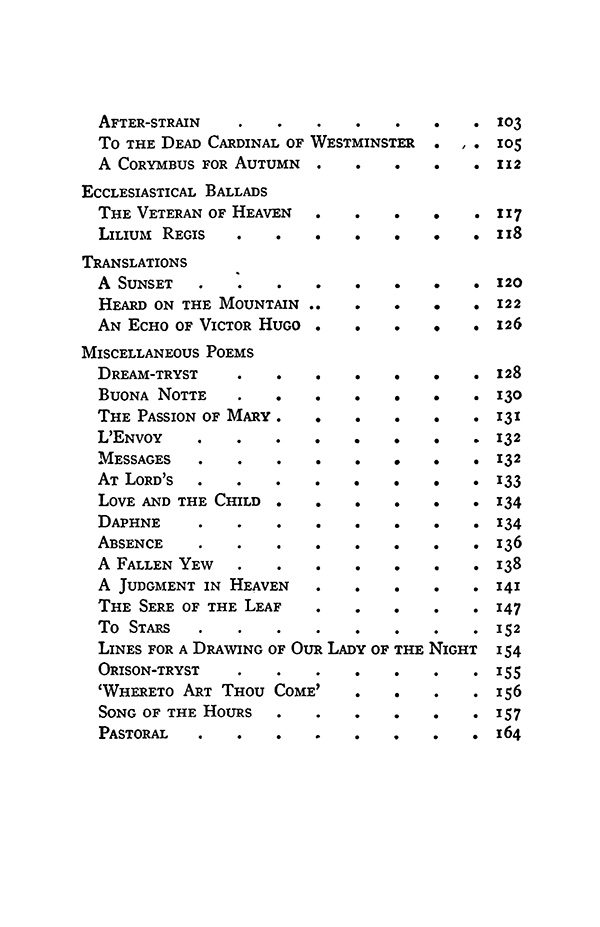 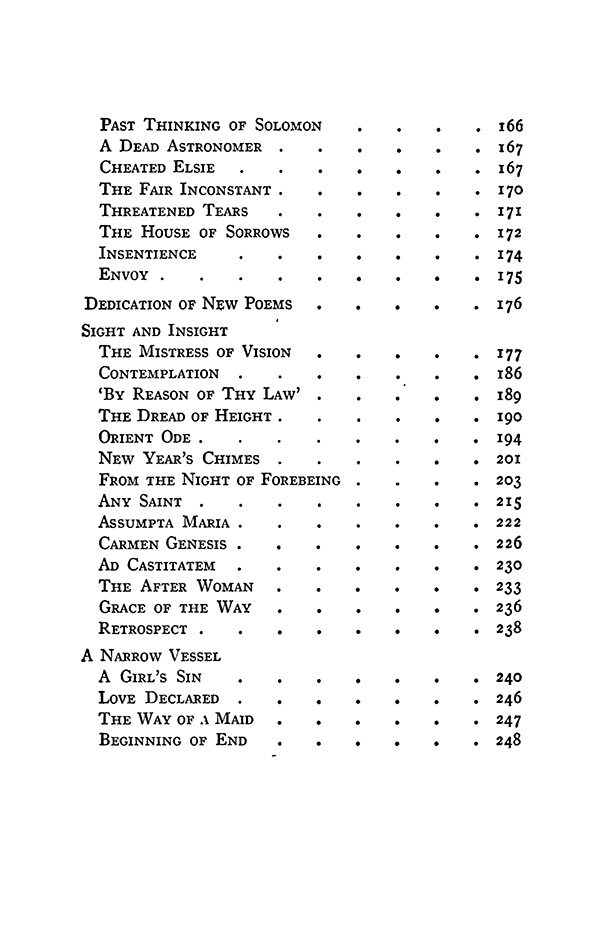 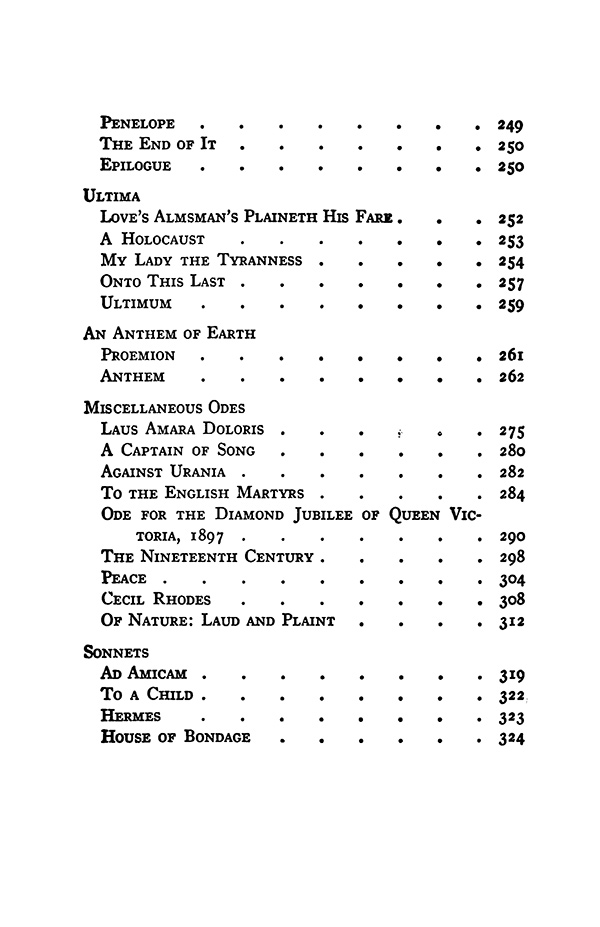 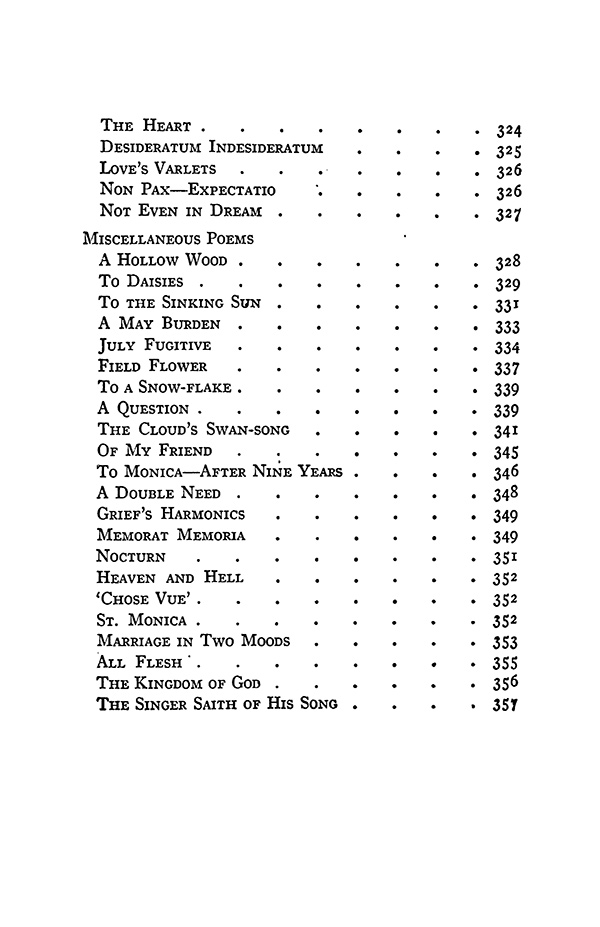 A fantastic collection of poems by a true master of the form. Francis Thompson was an English mystic and poet. Thompson went to medical school when he was 18, but left home at the age of 26 to pursue a life of writing. He was homeless for three years, becoming an opium addict and supporting himself through whatever means available. A married couple read his poetry and took him into their home in 1888, and in 1893 he published his first poetry book.

This vintage book contains the complete poetical works of Francis Thompson. They include: “Poems On Children”, “Daisy”, “The Poppy”, “To Monica Thought Dying”, “The Making Of Viola”, “To My Godchild”, “To Olivia”, “Little Jesus”, “Sister Songs”, “Love In Dian’s Lap”, “Proemion”, etc. Francis Thompson (1859–1907) was an English mystic and poet. Thompson went to medical school when he was 18, but left home at the age of 26 to pursue a life of writing. He was homeless for three years, becoming an opium addict and supporting himself through whatever means available. A married couple read his poetry and took him into their home in 1888, and in 1893 he published his first book, “Poems”. A fantastic collection of poems by a true master of the form. This classic work is being republished now in a new edition complete with a chapter from Benjamin Franklin Fisher’s “Francis Thompson, Essays” (1917).

Francis Thompson was born on 16th December 1859. He was an English poet and ascetic, who lived as a wanderer and vagrant for most of his life.

Thompson's father, Charles, was a doctor who had converted to Roman Catholicism, following his brother, Edward Healy Thompson – who was a friend of Cardinal Manning. The young Thompson was educated at Ushaw College, near Durham, and later went on to study medicine at Owens College, now the University of Manchester. He took no real interest in his studies and never practised as a doctor, moving instead to London in 1885, to try to become a writer.

Times were tough for Thompson in London however, and he was reduced to selling matches and newspapers for a living. During this time, he also became addicted to opium, which he first had taken as medicine for ill health. Thompson started living on the streets of Charing Cross and sleeping by the River Thames, with the homeless and other addicts. He was furthermore turned down from Oxford University, not because he was unqualified, but because of his drug addiction.

Thompson attempted suicide in his nadir of despair, but was saved from completing the action through a vision – which he believed to be that of a youthful poet, Thomas Chatterton. His interlocutor had committed suicide almost a century earlier. It was also in this period of despair that a prostitute, whose identity Thompson never revealed, befriended him. She gave him lodgings and shared her income with him. Thompson later described her in his poetry as his saviour. She soon disappeared, however, never to return, in his estimation because she feared she would taint his growing reputation.

In 1888, he had been 'discovered' after sending his poetry to the magazine Merrie England. Thompson was sought out by the editors of the magazine, Wilfrid and Alice Meynell, who recognised the value of his work. The couple gave him a home and arranged for publication of his first book, Poems in 1893. The book attracted the attention of sympathetic critics in the St James's Gazette and other newspapers, and the Coventry Patmore wrote a eulogistic notice in the 'Fortnightly Review' of January 1894.

Despite his success, Thompson was unable to shake his opium addiction, which was at its height following his years on the streets. The Meynells consequently sent him to 'Our Lady of England Priory' in Storrington, in order to recover. After this, he lived as  an invalid in Wales and at Storrington.

Thompson's most famous poem, The Hound of Heaven, describes the pursuit of the human soul by God. This poem is the source of the phrase 'with all deliberate speed', used by the Supreme Court in Brown II; the remedy phase of the famous decision on school desegregation. In addition, Thompson wrote the most famous cricket poem, the nostalgic At Lord's. He also wrote Sister Songs (1895), New Poems (1897), and a posthumously published essay, 'Shelley' (1909). He wrote a treatise On Health and Holiness, dealing with the ascetic life, which was published in 1905.

A lifetime of extreme poverty, ill-health, and an addiction to opium, had taken a heavy toll on Thompson. He eventually died from tuberculosis, at the age of forty-seven, on 13th November 1907. Thompson passed-away in the Hospital of St John and St. Elizabeth, and is buried in St. Mary's Roman Catholic Cemetery in Kensal Green. His tomb bears the last line from a poem he wrote for his godson:

"Look for me in the nurseries of Heaven."

K. Chesterton said shortly after his death that 'with Francis Thompson we lost the greatest poetic energy since Browning.' Among Thompson's devotees was the young J.R.R. Tolkien, who purchased a volume of Thompson's works in 1913-1914, and later said that it was an important influence on his own writing. The home in Ashton-under-Lyne where Thompson lived from 1864 to 1885, was marked with a blue plaque; however, in 2014, the building collapsed.

Be the first to review “Complete Poetical Works” Cancel reply

Nets to Catch the Wind