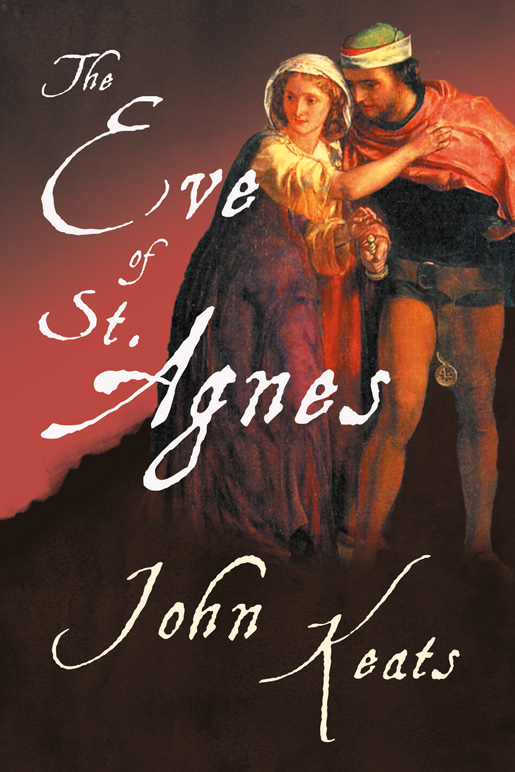 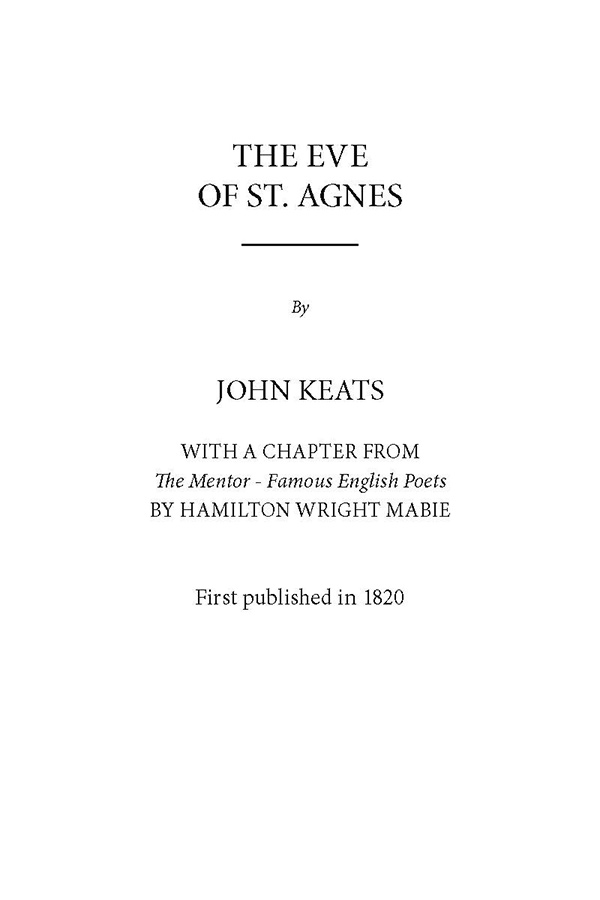 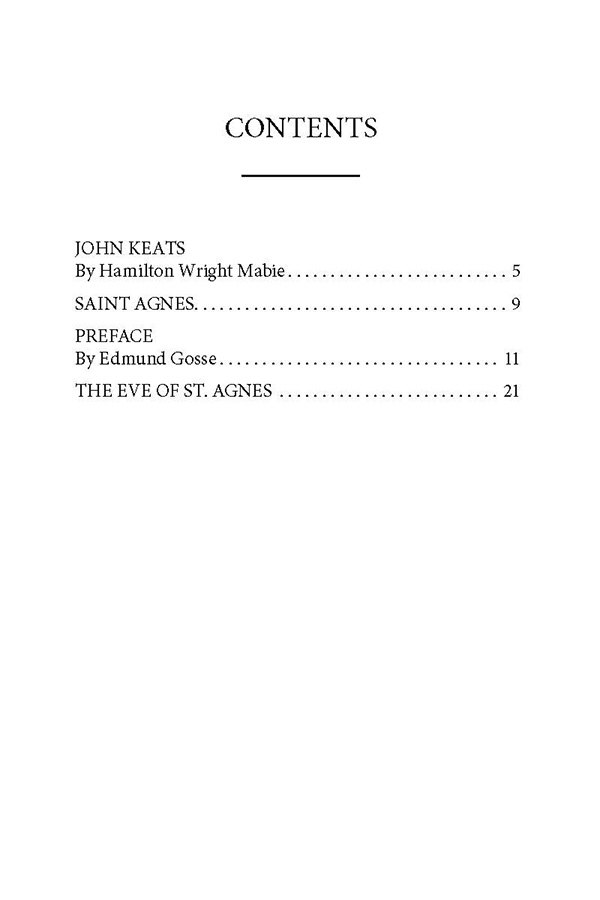 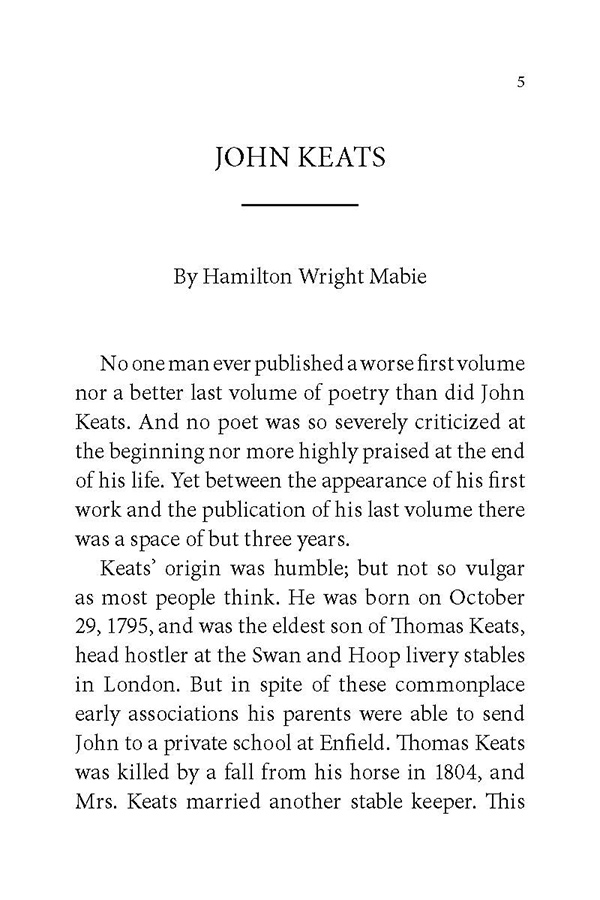 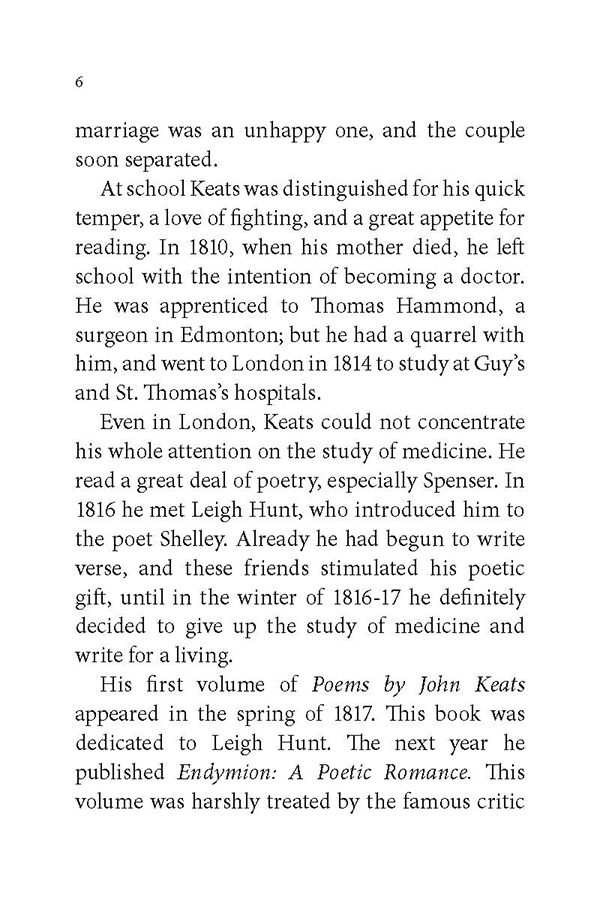 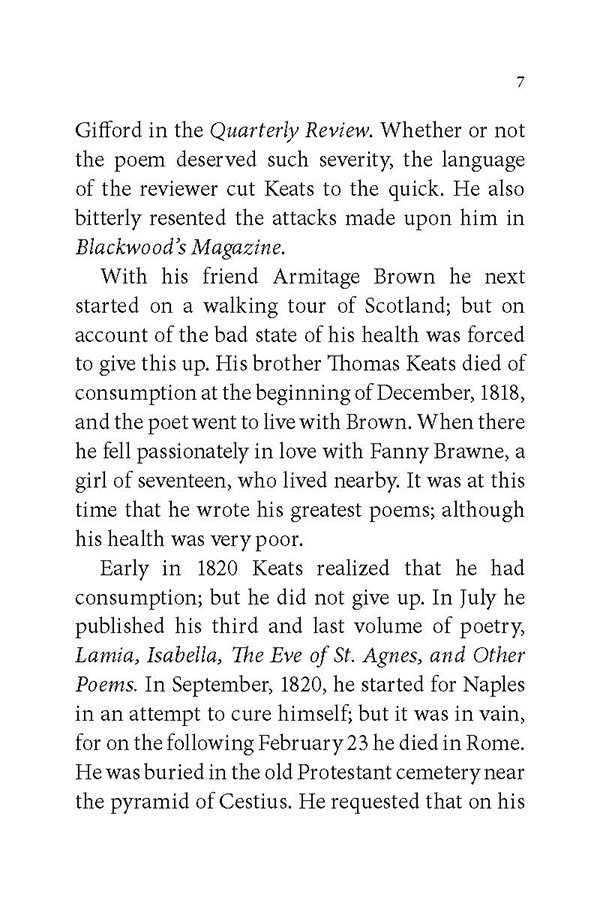 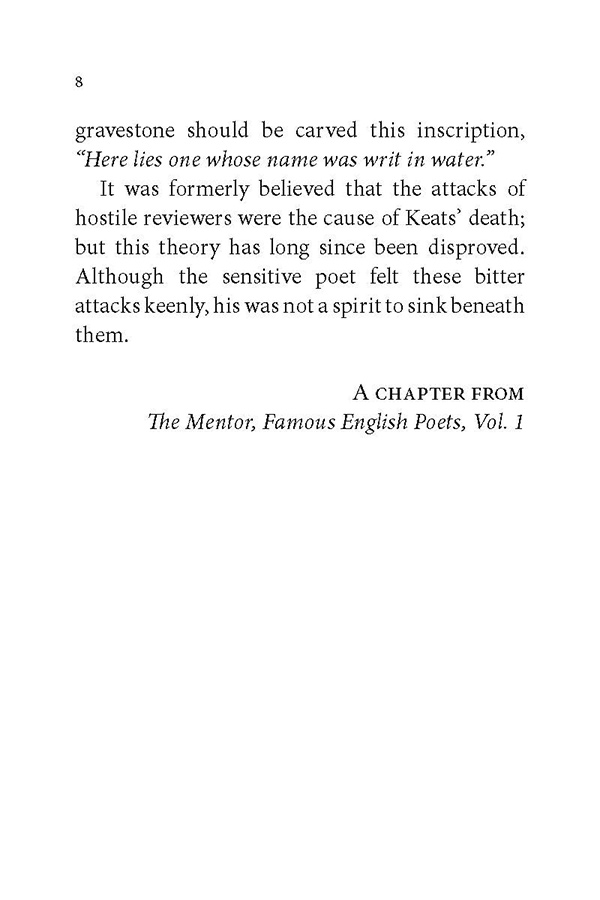 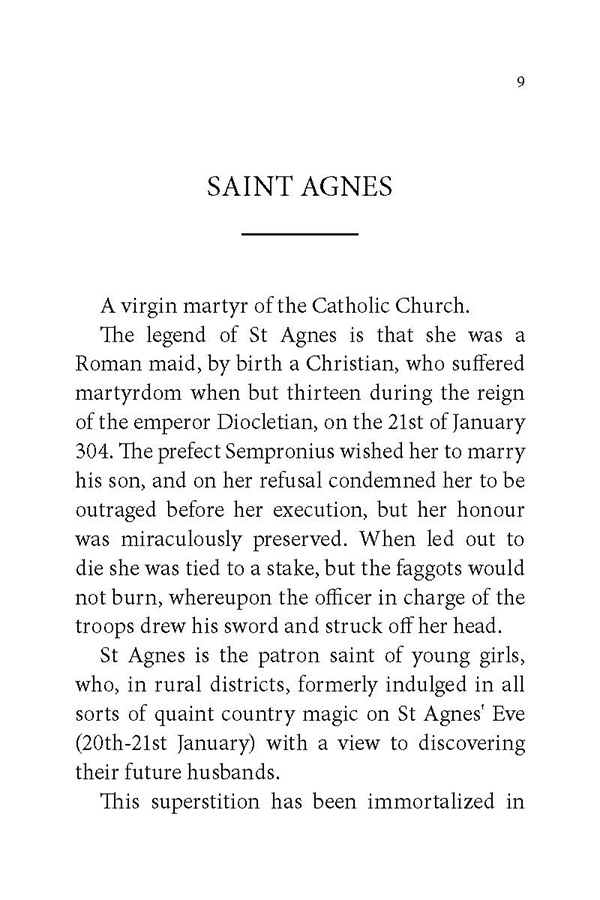 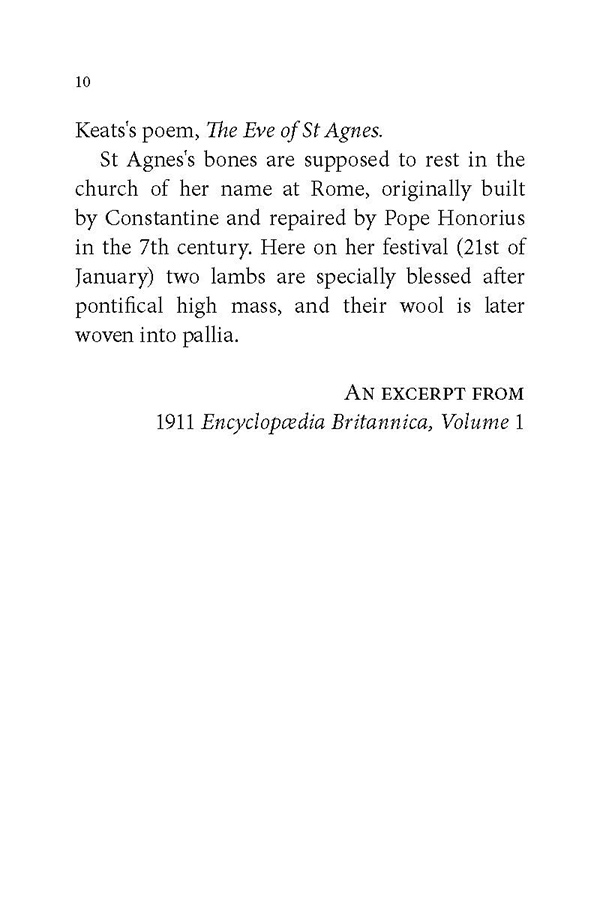 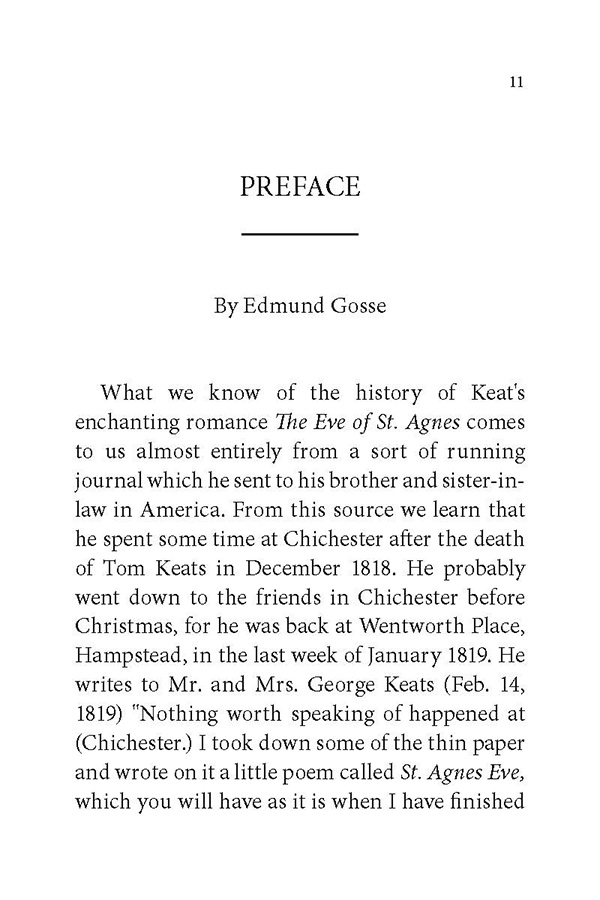 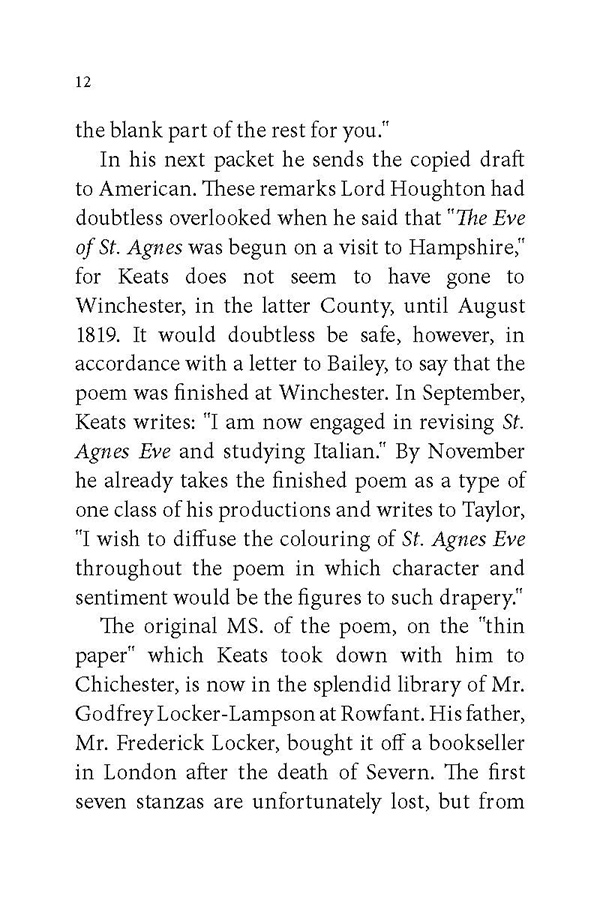 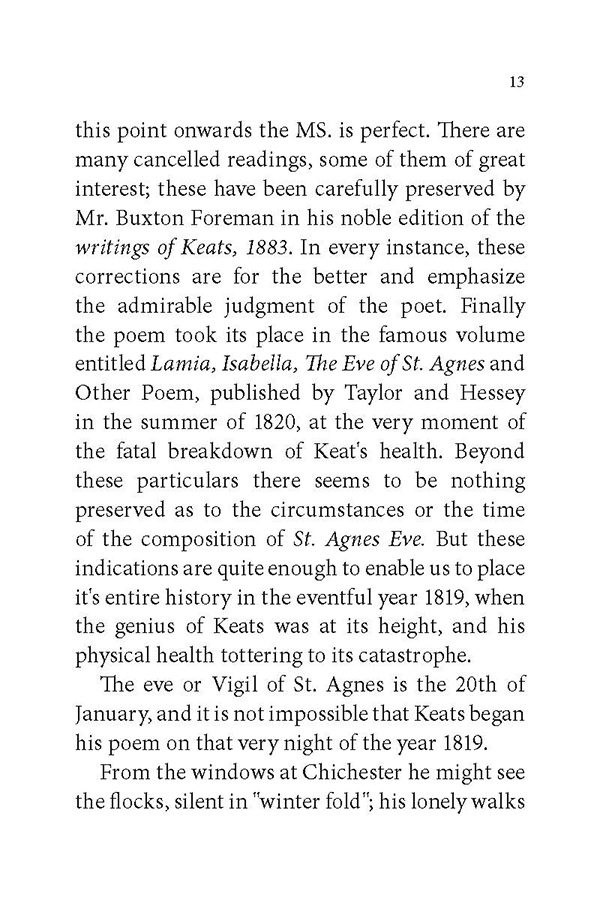 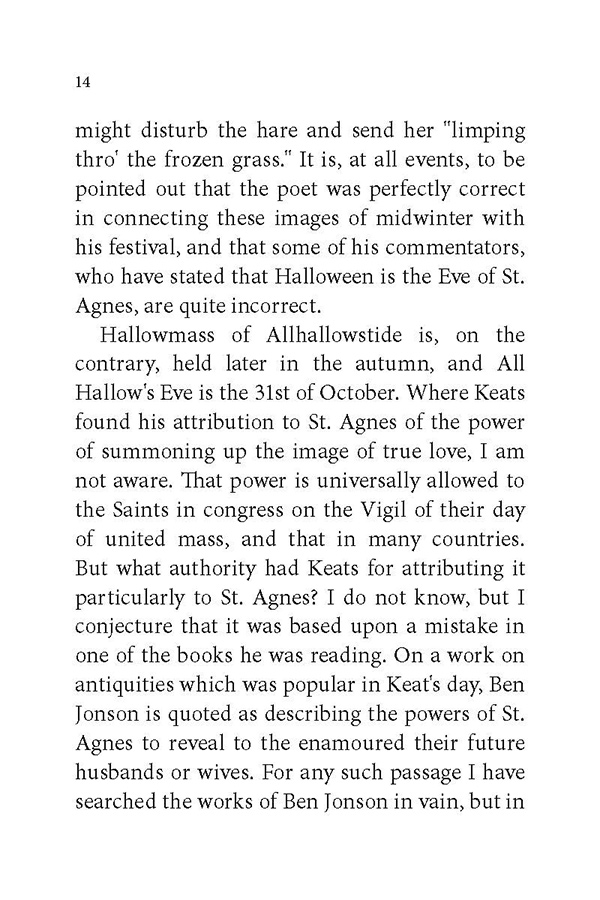 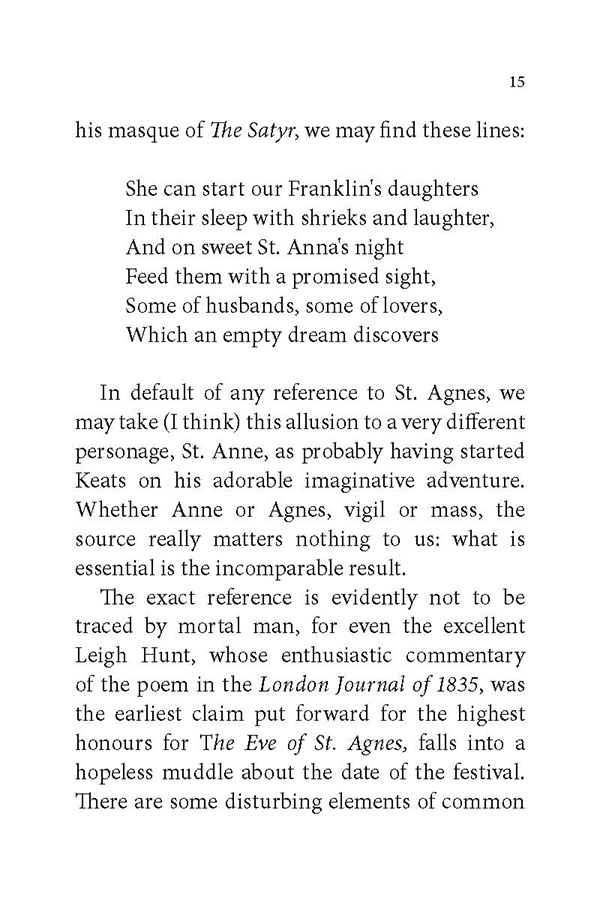 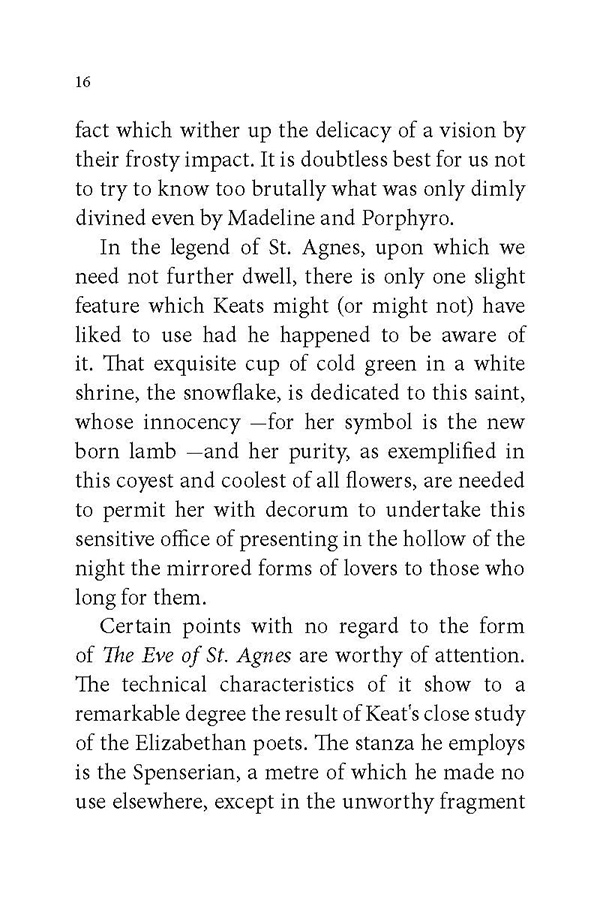 A Romantic narrative poem written by John Keats in 1819. Comprised of 42 Spenserian stanzas, it was considered one of his best poems by his contemporaries and remained influential well into the 19th century.

“The Eve of St. Agnes” is a Romantic narrative poem written by John Keats in 1819 and first published in 1820. Comprised of 42 Spenserian stanzas, it was considered one of his best poems by his contemporaries and remained influential well into the 19th century. John Keats (1795–1821) was an English Romantic poet and one of the most important figures in the second generation of Romantic poets, together with Percy Bysshe Shelley and Lord Byron. He died from tuberculosis at the age of 25, just four years after his work entered publication. Other notable works by this author include: “Ode to a Nightingale”, “Sleep and Poetry”, and “On First Looking into Chapman’s Homer”. A fantastic poem by a master Romantic poet that will appeal to all lovers of English poetry. This classic work is being republished now in a new edition complete with an introductory chapter from “The Mentor – Famous English Poets” by Hamilton Wright Mabie.

No one man ever published a worse first volume nor a better last volume of poetry than did John Keats. And no poet was so severely criticized at the beginning nor more highly praised at the end of his life. Yet between the appearance of his first work and the publication of his last volume there was a space of but three years.

Keats’ origin was humble; but not so vulgar as most people think. He was born on October 29, 1795, and was the eldest son of Thomas Keats, head hostler at the Swan and Hoop livery stables in London. But in spite of these commonplace early associations his parents were able to send John to a private school at Enfield. Thomas Keats was killed by a fall from his horse in 1804, and Mrs. Keats married another stable keeper. This marriage was an unhappy one, and the couple soon separated.

At school Keats was distinguished for his quick temper, a love of fighting, and a great appetite for reading. In 1810, when his mother died, he left school with the intention of becoming a doctor. He was apprenticed to Thomas Hammond, a surgeon in Edmonton; but he had a quarrel with him, and went to London in 1814 to study at Guy’s and St. Thomas’s hospitals.

Even in London, Keats could not concentrate his whole attention on the study of medicine. He read a great deal of poetry, especially Spenser. In 1816 he met Leigh Hunt, who introduced him to the poet Shelley. Already he had begun to write verse, and these friends stimulated his poetic gift, until in the winter of 1816-17 he definitely decided to give up the study of medicine and write for a living.

His first volume of Poems by John Keats appeared in the spring of 1817. This book was dedicated to Leigh Hunt. The next year he published Endymion: A Poetic Romance. This volume was harshly treated by the famous critic Gifford in the Quarterly Review. Whether or not the poem deserved such severity, the language of the reviewer cut Keats to the quick. He also bitterly resented the attacks made upon him in Blackwood’s Magazine.

With his friend Armitage Brown he next started on a walking tour of Scotland; but on account of the bad state of his health was forced to give this up. His brother Thomas Keats died of consumption at the beginning of December, 1818, and the poet went to live with Brown. When there he fell passionately in love with Fanny Brawne, a girl of seventeen, who lived nearby. It was at this time that he wrote his greatest poems; although his health was very poor.

Early in 1820 Keats realized that he had consumption; but he did not give up. In July he published his third and last volume of poetry, Lamia, Isabella, The Eve of St. Agnes, and Other Poems. In September, 1820, he started for Naples in an attempt to cure himself; but it was in vain, for on the following February 23 he died in Rome. He was buried in the old Protestant cemetery near the pyramid of Cestius. He requested that on his gravestone should be carved this inscription,

“Here lies one whose name was writ in water.”

It was formerly believed that the attacks of hostile reviewers were the cause of Keats’ death; but this theory has long since been disproved. Although the sensitive poet felt these bitter attacks keenly, his was not a spirit to sink beneath them.

Be the first to review “The Eve of St. Agnes” Cancel reply