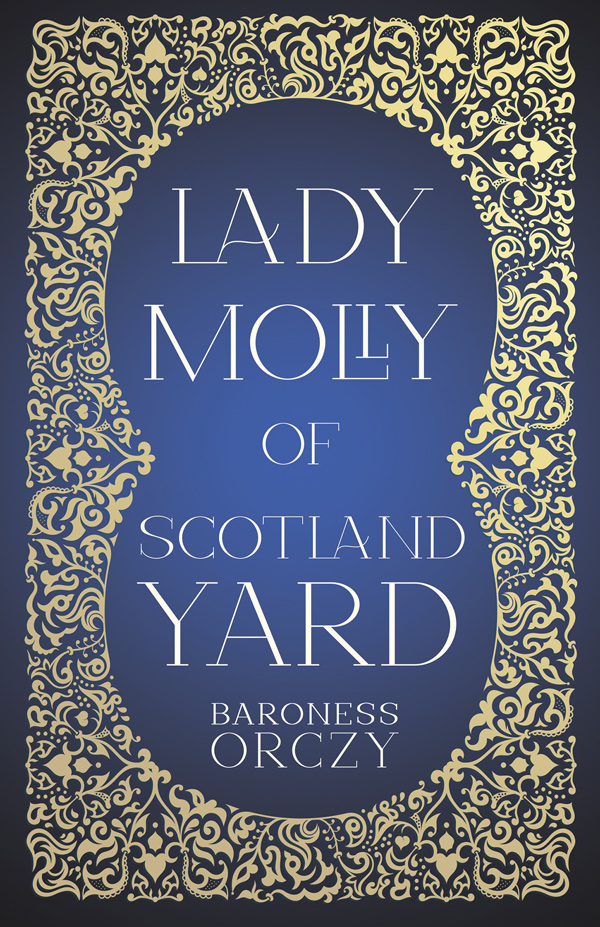 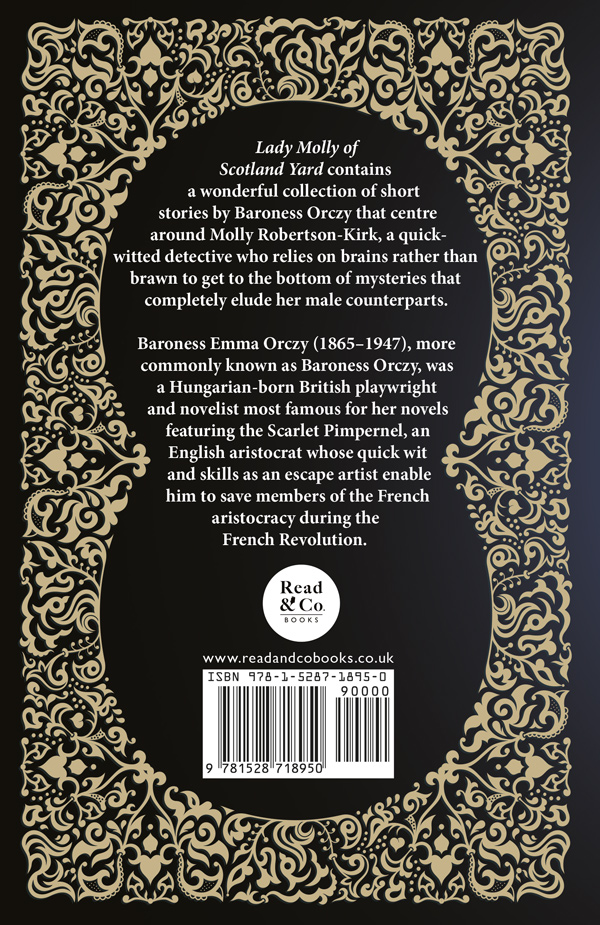 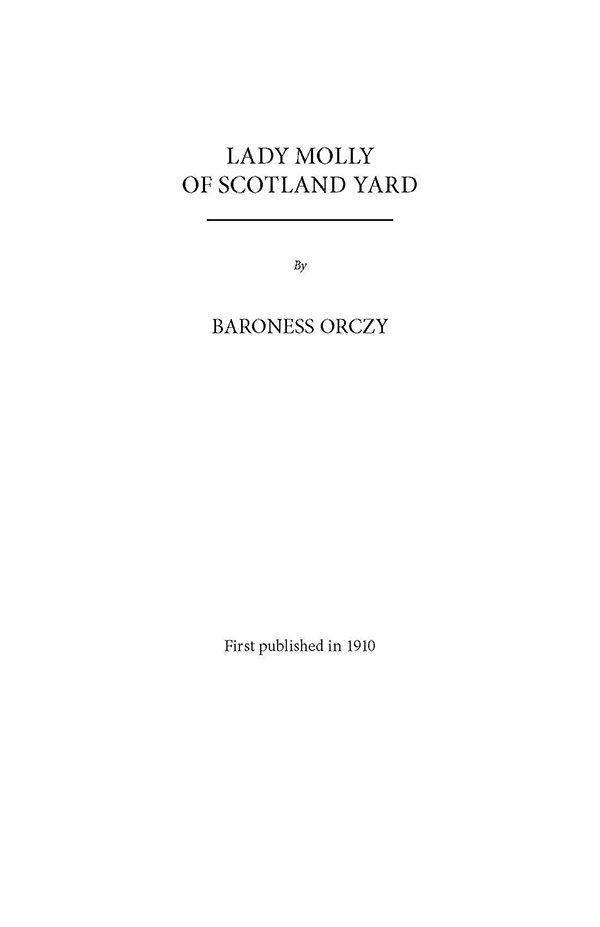 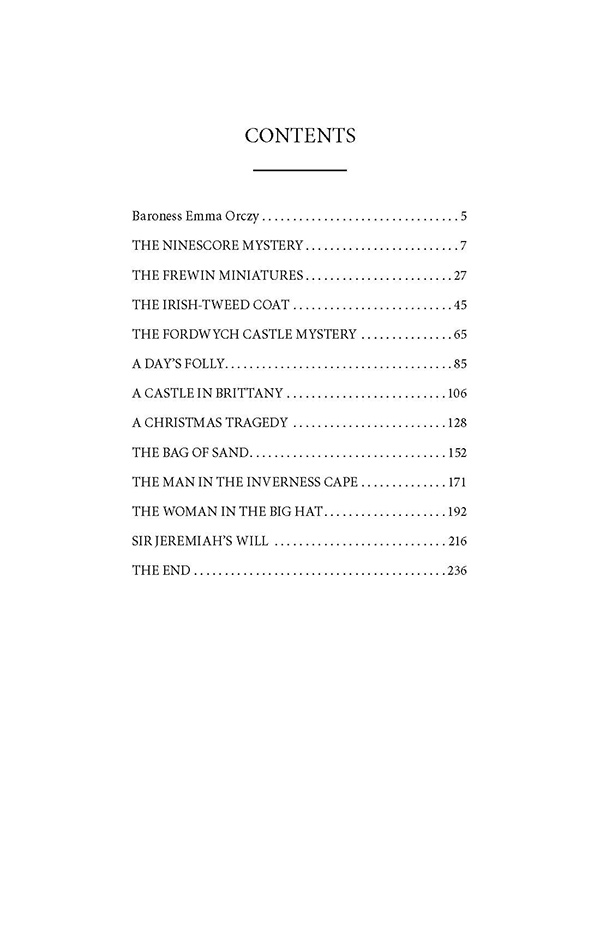 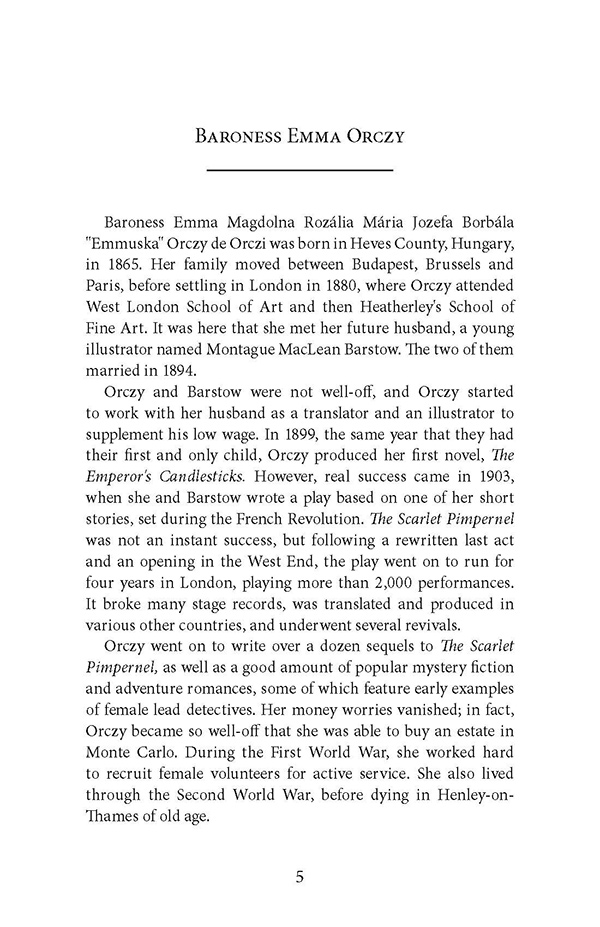 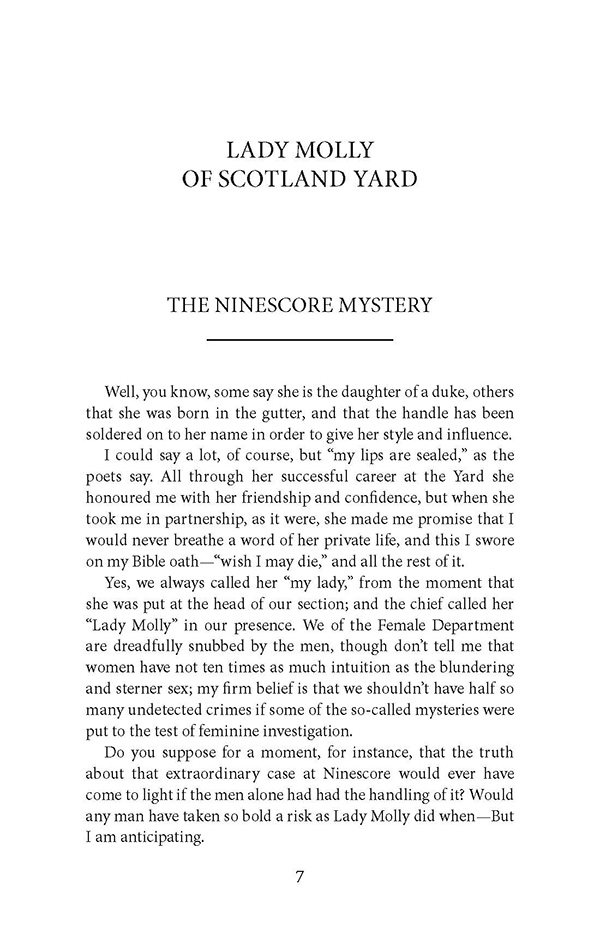 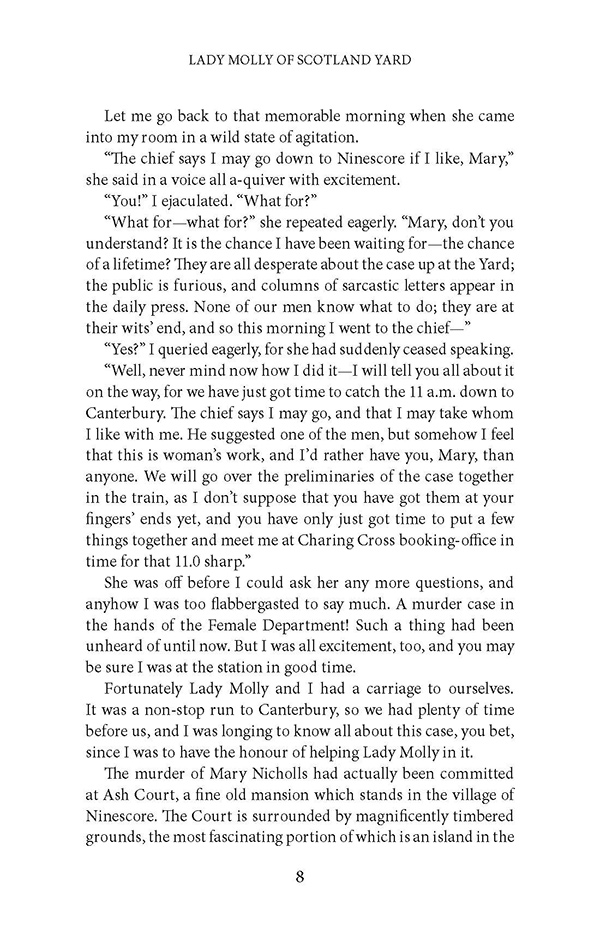 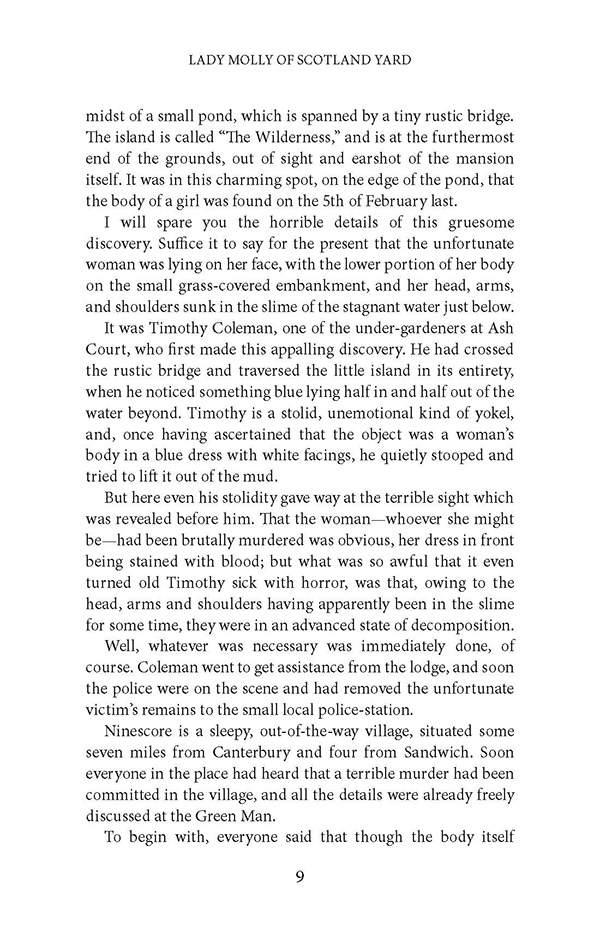 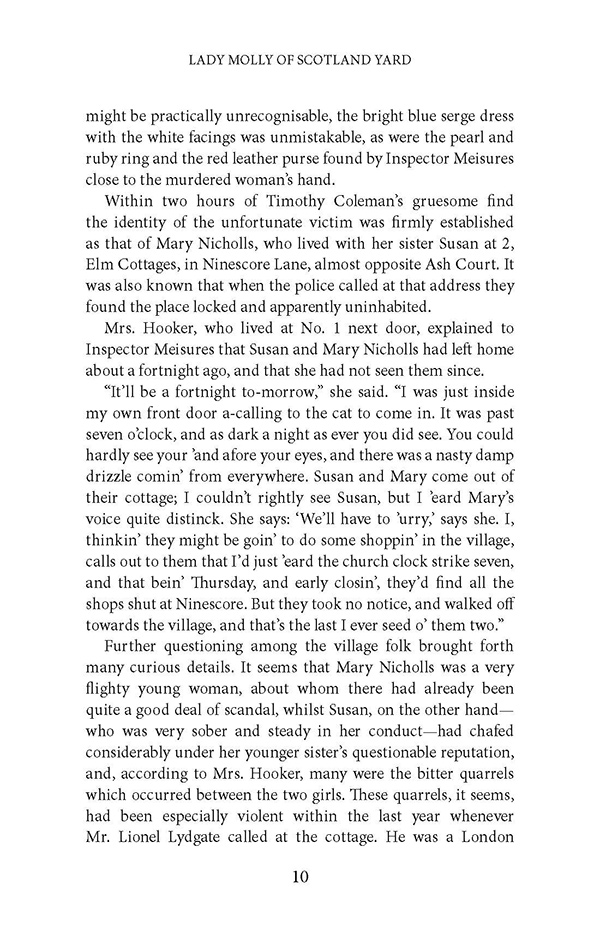 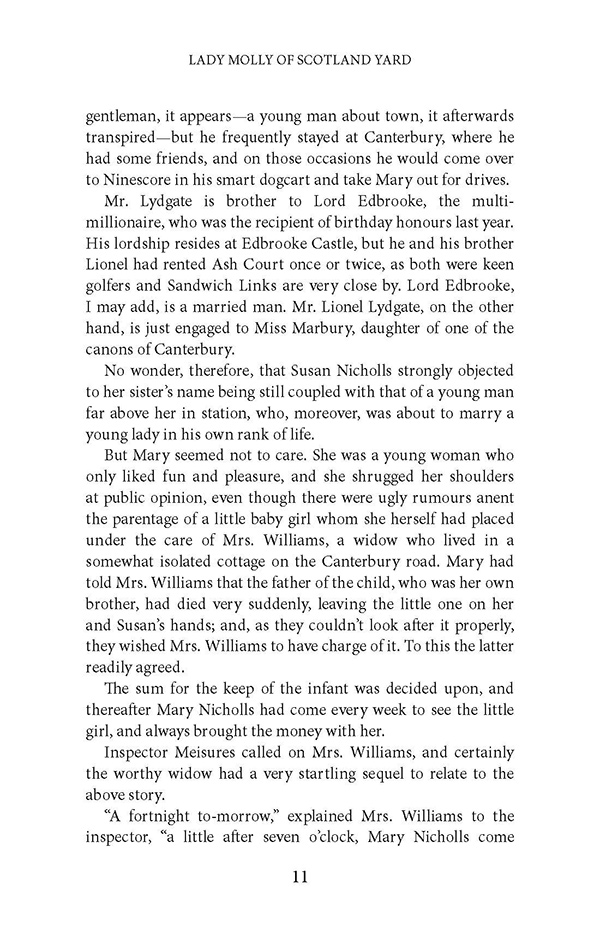 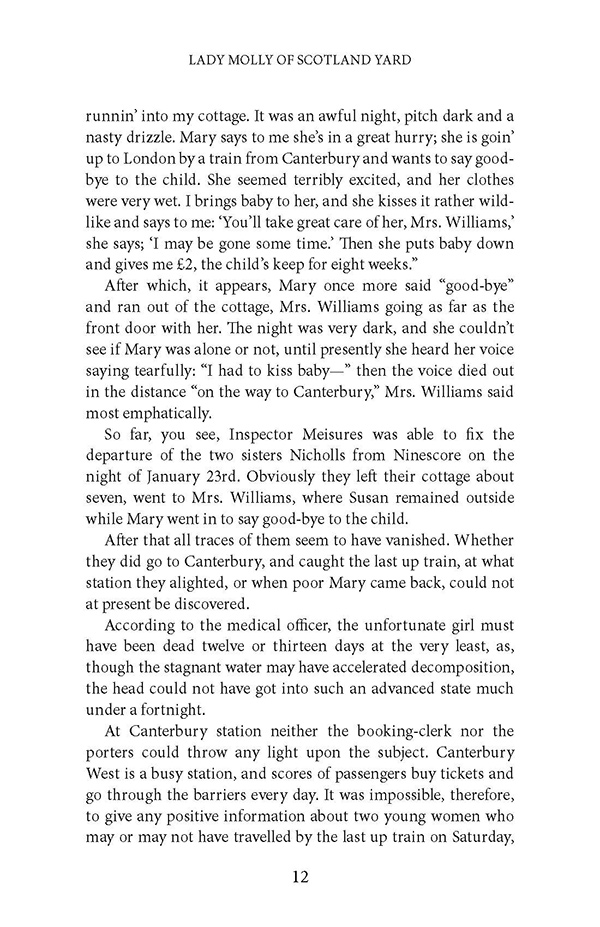 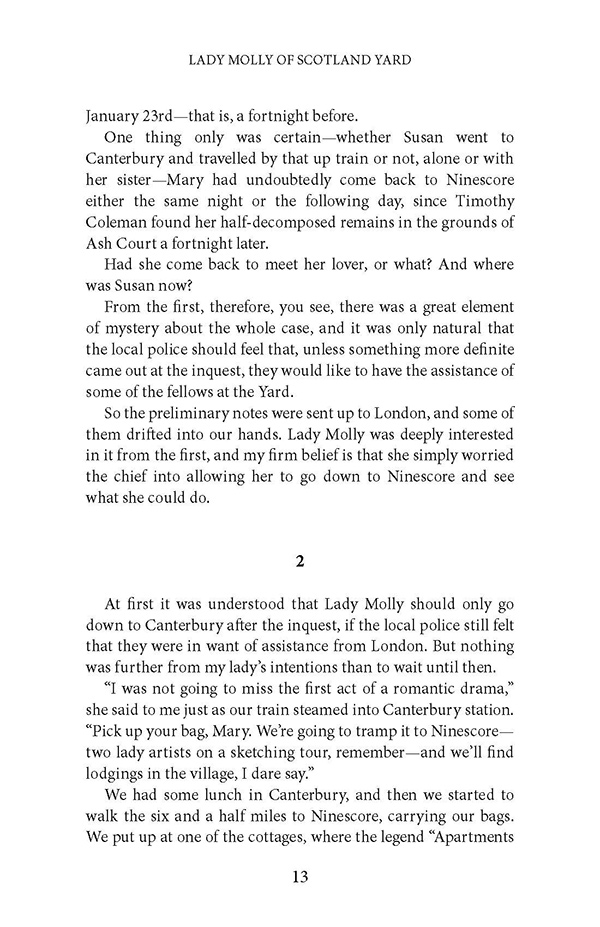 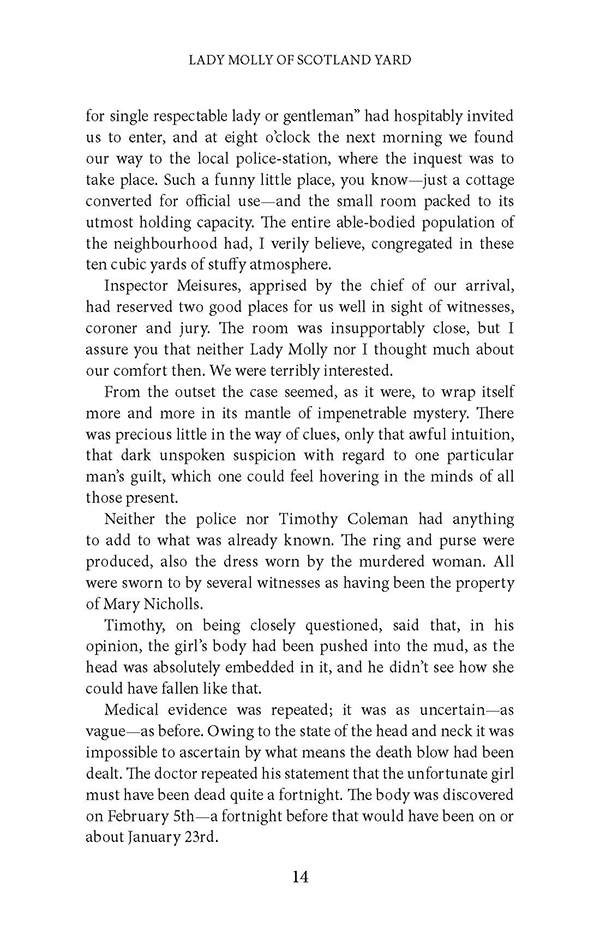 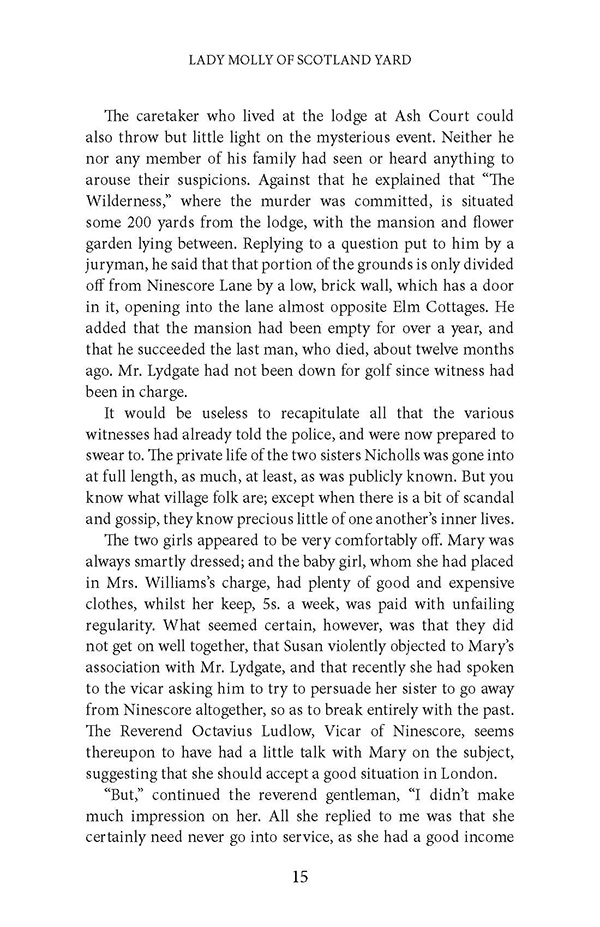 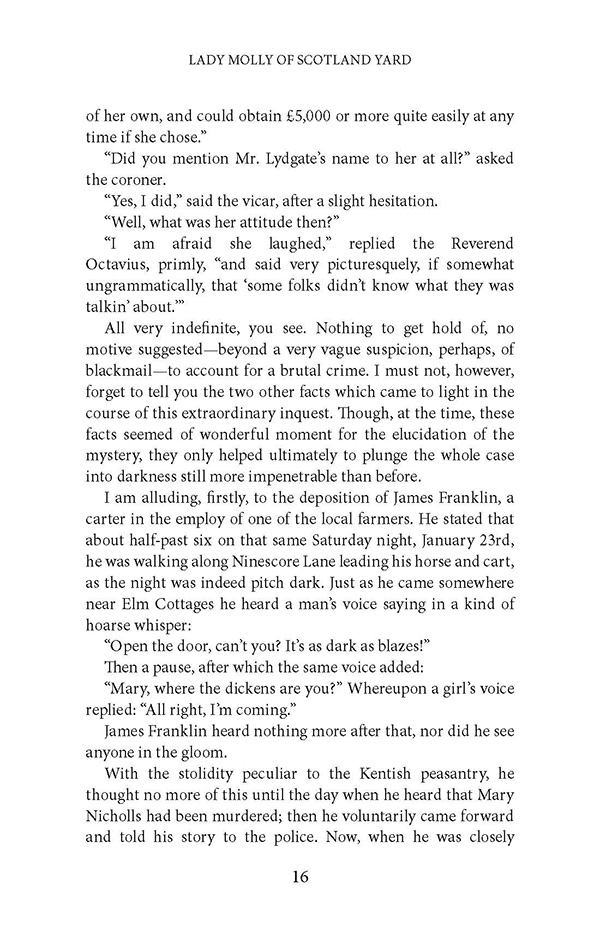 A wonderful collection of short stories that centre around Molly Robertson-Kirk, a quick-witted detective who relies on brains rather than brawn to get to the bottom of mysteries that completely elude her male counterparts.

“Lady Molly of Scotland Yard” contains a wonderful collection of short stories by Baroness Orczy that centre around Molly Robertson-Kirk, a quick-witted detective who relies on brains rather than brawn to get to the bottom of mysteries that completely elude her male counterparts. Highly recommended for fans of classic detective fiction and other works by this seminal author. Baroness Emma Orczy (1865–1947), more commonly known as Baroness Orczy, was a Hungarian-born British playwright and novelist most famous for her novels featuring the Scarlet Pimpernel, an English aristocrat whose quick wit and skills as an escape artist enable him to save members of the French aristocracy during the French Revolution. Contents include: “The Ninescore Mystery”, “The Frewin Miniatures”, “The Irish-Tweed Coat”, “The Fordwych Castle Mystery”, “A Day’s Folly”, “A Castle in Brittany”, “A Christmas Tragedy”, “The Bag of Sand”, etc. Other notable works by this author include: “By the Gods Beloved” (1905), “I Will Repay the Scarlet Pimpernel” (1906), and “A Son of the People” (1906). Read & Co. Classics is proudly republishing this collection of short stories now in a brand new edition complete with a specially-commissioned new biography of the author.

Baroness Emma Magdolna Rozália Mária Jozefa Borbála "Emmuska" Orczy de Orczi was born in Heves County, Hungary, in 1865. Her family moved between Budapest, Brussels and Paris, before settling in London in 1880, where Orczy attended West London School of Art and then Heatherley's School of Fine Art. It was here that she met her future husband, a young illustrator named Montague MacLean Barstow. The two of them married in 1894.

Orczy and Barstow were not well-off, and Orczy started to work with her husband as a translator and an illustrator to supplement his low wage. In 1899, the same year that they had their first and only child, Orczy produced her first novel, The Emperor's Candlesticks. However, real success came in 1903, when she and Barstow wrote a play based on one of her short stories, set during the French Revolution. The Scarlet Pimpernel was not an instant success, but following a rewritten last act and an opening in the West End, the play went on to run for four years in London, playing more than 2,000 performances. It broke many stage records, was translated and produced in various other countries, and underwent several revivals.

Orczy went on to write over a dozen sequels to The Scarlet Pimpernel, as well as a good amount of popular mystery fiction and adventure romances, some of which feature early examples of female lead detectives. Her money worries vanished; in fact, Orczy became so well-off that she was able to buy an estate in Monte Carlo. During the First World War, she worked hard to recruit female volunteers for active service. She also lived through the Second World War, before dying in Henley-on-Thames of old age.

The Ghost Stories of Edith Wharton