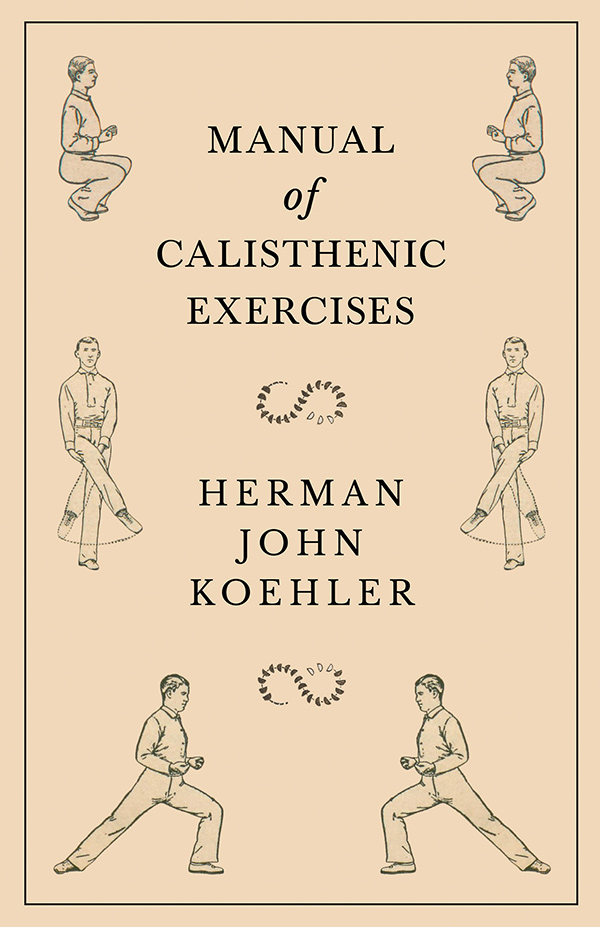 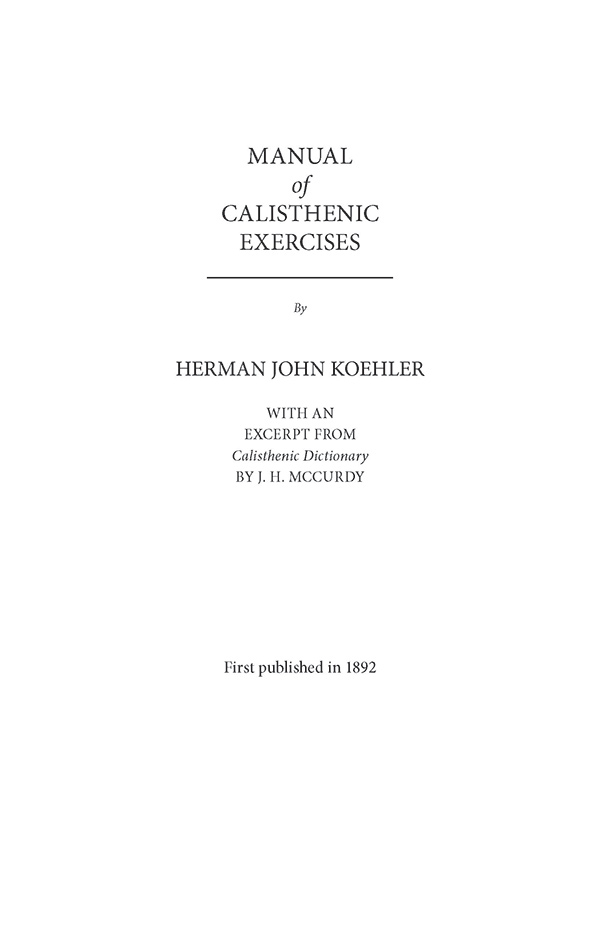 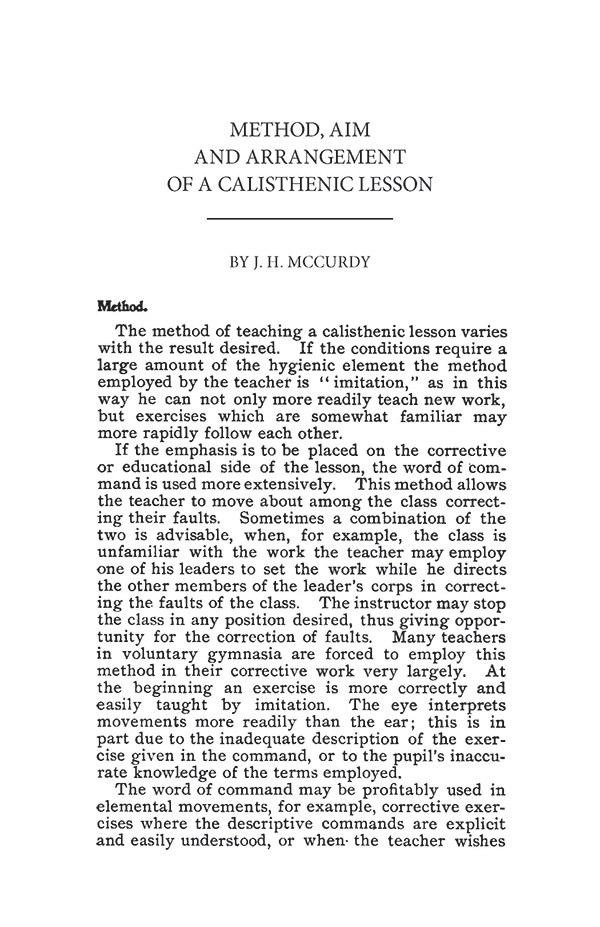 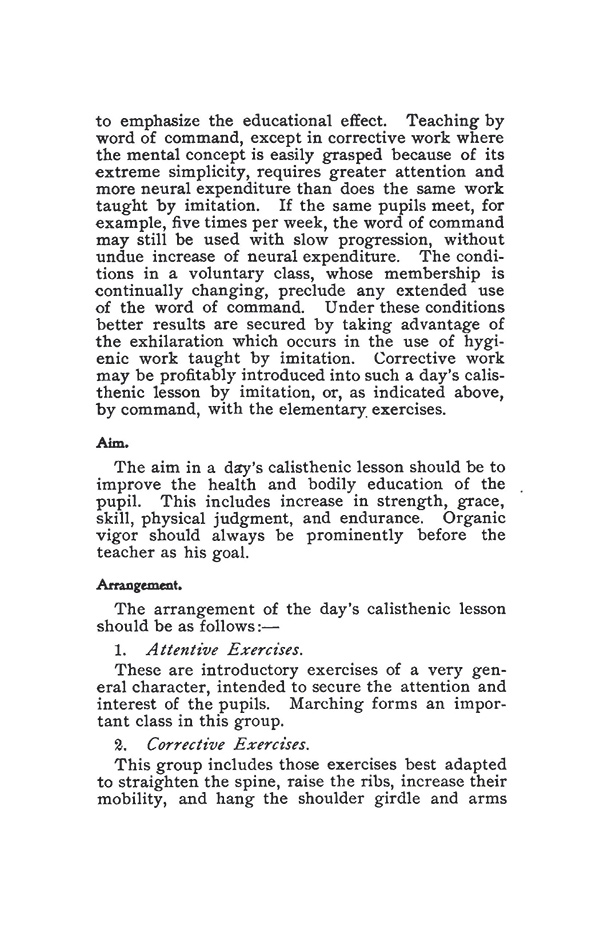 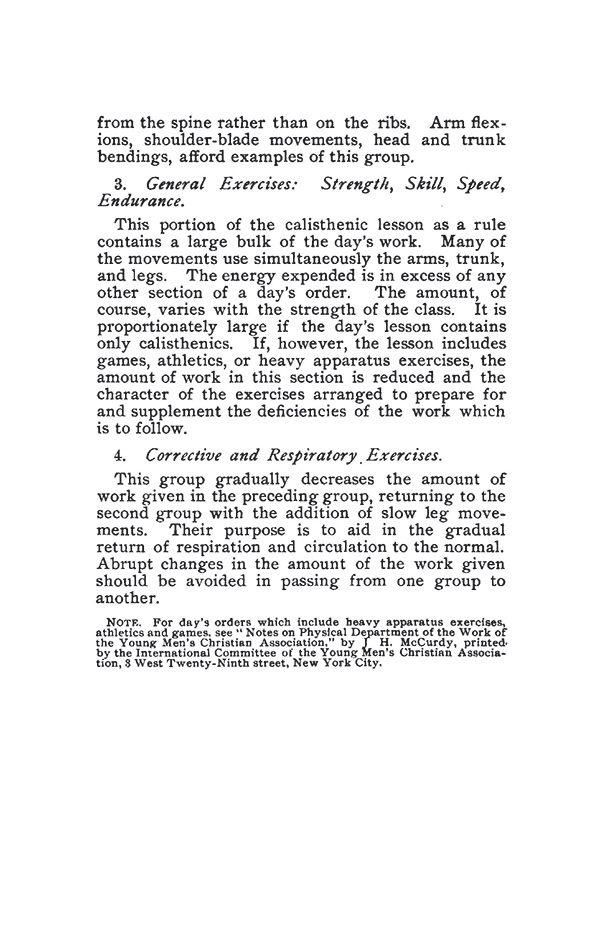 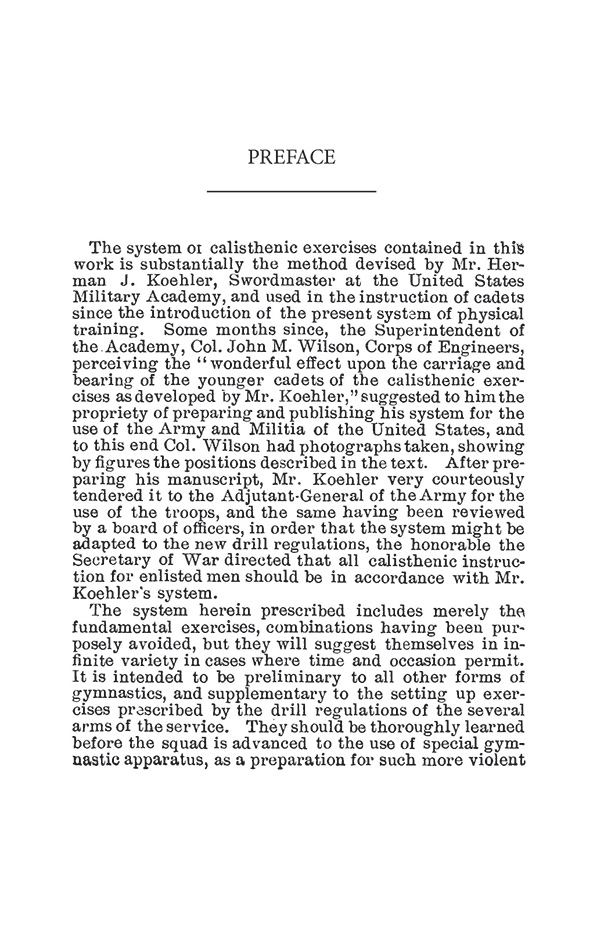 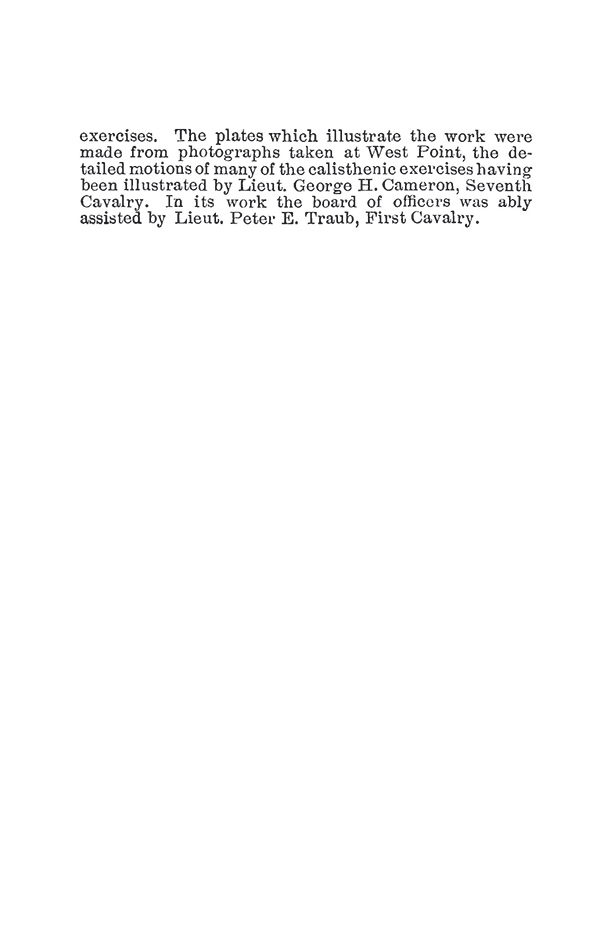 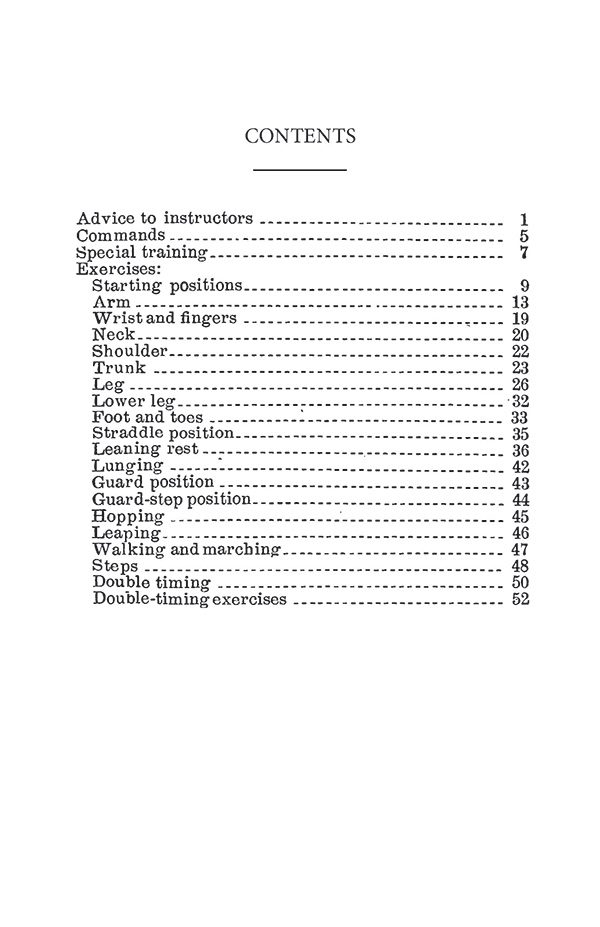 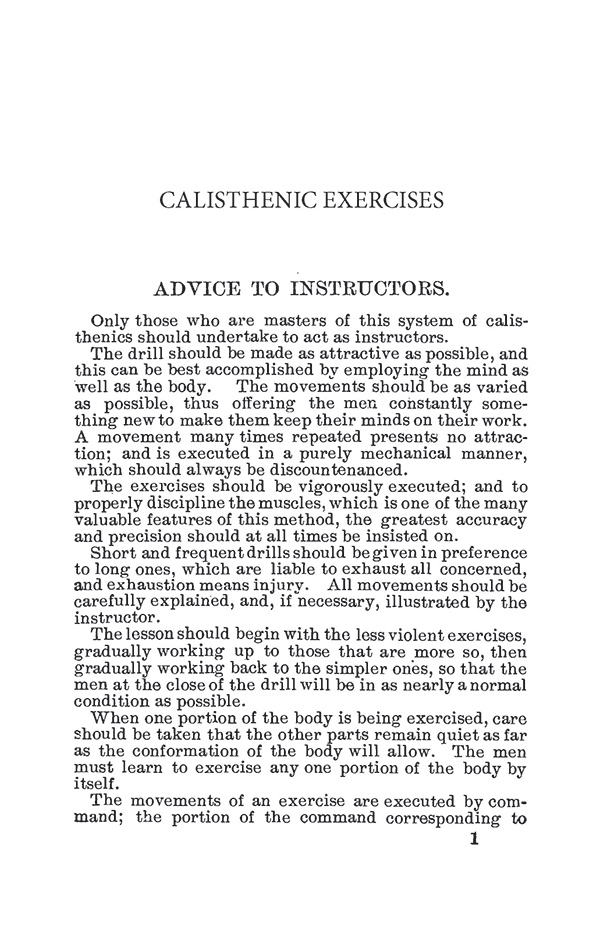 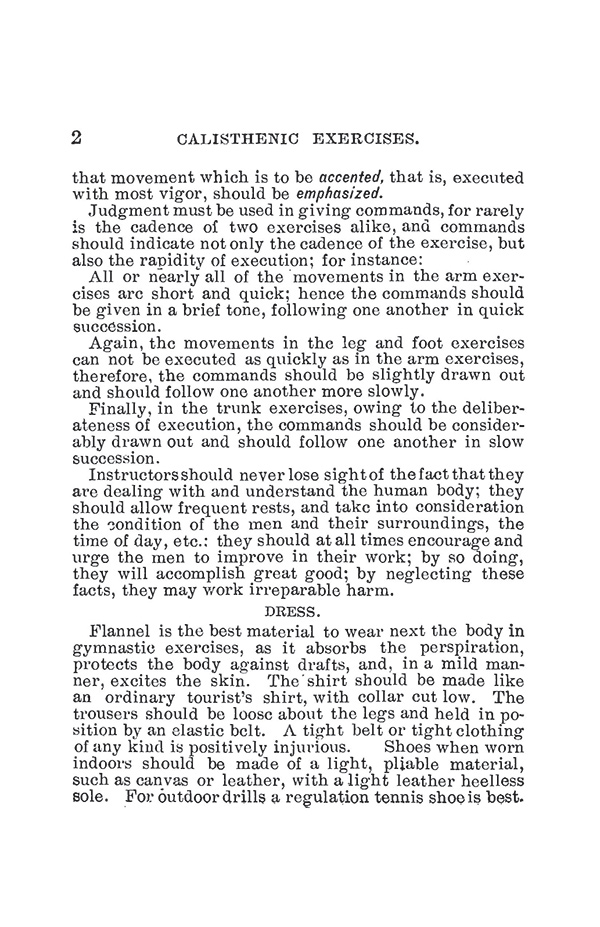 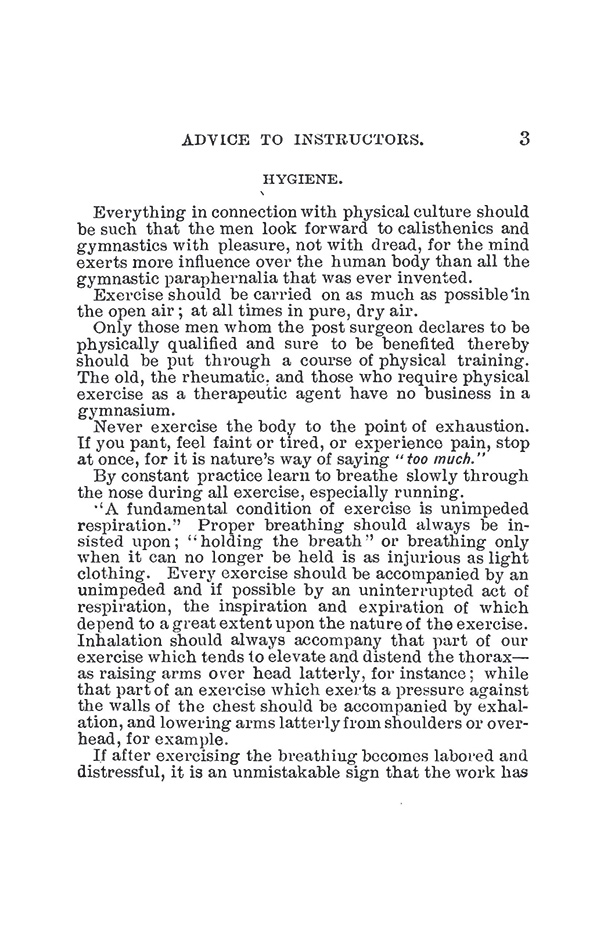 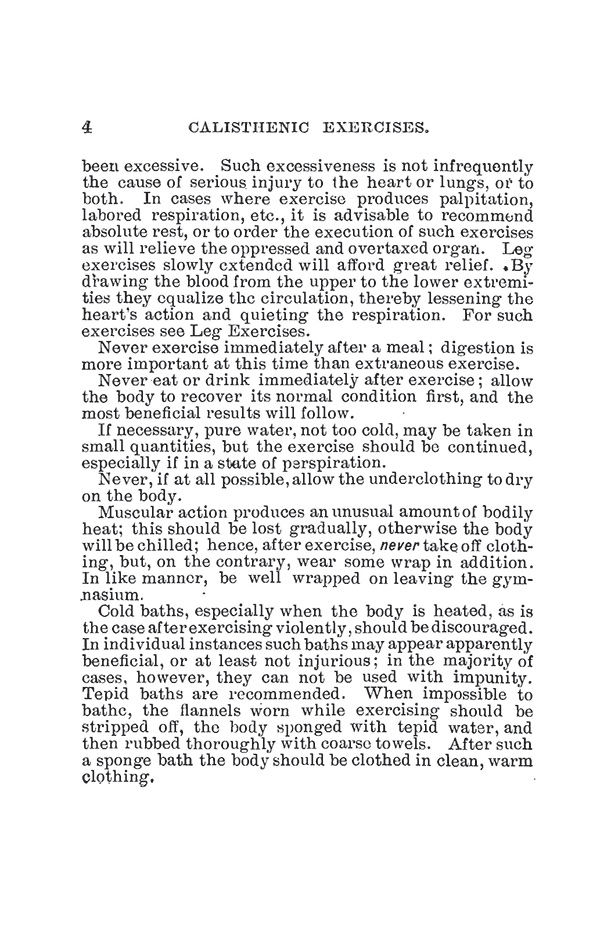 A fantastic guide to exercising and keeping fit using Calisthenics, a form of exercise based on the doing of various gross motor movements such as running, standing, grasping, pushing, etc. These movements are usually performed in a rhythmic fashion and require little to no equipment, making it perfect for those too busy to go to the gym or simple interested in exercising at home and on the move.

Herman John Koehler’s “Manual of Calisthenic Exercises” is a fantastic guide to exercising and keeping fit using Calisthenics, a form of exercise based on the doing of various gross motor movements such as running, standing, grasping, pushing, etc. These movements are usually performed in a rhythmic fashion and require little to no equipment, making it perfect for those too busy to go to the gym or simple interested in exercising at home and on the move. Contents include: “Order of the Secretary of War”, “Preface”, “Advice to Instructors”, “Commands”, “Exercises”, “Starting Positions”, “Arm”, “Wrist and Fingers”, “Neck”, “Shoulder”, “Trunk”, “Leg”, “Foot and Toes”, “Straddle Position”, etc. Many vintage books such as this are increasingly scarce and expensive. We are republishing this volume now in an affordable, modern, high-quality edition complete with the original text and artwork.

It was on February 1, 1885, that Herman J. Koehler reported to Colonel Wesley Merritt, then superintendent, as Master of the Sword of the United States Military Academy. And on that day it may justifiably be stated that modern Army Physical Training began. The gymnasium, which measured 13x25x60 feet, boasted of equipment consisting of one horizontal bar, two wooden horses, one life size and one colt size, a swing, parallel bars, four feet high and twenty feet long, nailed to the floor, and some clubs and dumbbells of antiquated size and weight. However, the beneficial effects of the system of instruction introduced by Colonel Koehler were so readily apparent that in 1892 a new gymnasium was completed and instruction expanded to include fencing, swimming, and gymnastics.

In 1905 another advance was accomplished when boxing and wrestling were added to the Academy’s physical curriculum, instruction being extended at the same time to include the entire Corps. Five years later witnessed further recognition of the Koehler system of physical education when the present modern gymnasium was constructed. In 1920, the present course of physical and intramural athletic training was inaugurated, thereby establishing the Military Academy without a peer the world over.

In addition to his success at West Point, Colonel Koehler had distinguished himself prior to his service in the Army. Beginning physical training at the age of eight, he won the national championship in all around gymnasium and athletics at the age of nineteen. In 1880 he emerged with second rank in an international competition held at Frankfort-on-the-Main, the competitors numbered over five hundred. The following year Colonel Koehler attended as an on-looker a national competition staged in the same city. Upon discovery of the fact that the man who won first place the preceding year was competing, he entered the lists despite the fact that he had not trained for the event. The results placed Colonel Koehler first against a field of three hundred.

The recent World War supplied him with another opportunity for distinguished service to his country. Placed in charge of the disciplinary physical training in the Officers and Divisional Training Camps of the National Army, he personally instructed over 200,000 men, of whom 35,000 were aspirants for commissions. It was not infrequent for him to lead an entire brigade of 6,000 men in calisthenics. The Distinguished Service Medal was awarded Colonel Koehler in 1919 in recognition of these achievements.

Previous to the war he had assisted in the physical instruction of the New York and Massachusetts National Guard regiments in 1911, 1912, and 1913; had aided the establishment of the recruit school of the New York Police Department in 1913; had sole charge of drill and physical instruction of the New York quota during the Mexican border trouble in 1916; and was in command of the disciplinary training at Plattsburg in 1915 and 1916, serving under General Underwood. In 1921 and 1922 he assisted with the C.M.T.C. camps. It is estimated that he has during his career instructed upward of 400,000 persons, a distinction, which certainly has never been equaled.

Since the time of Colonel Thayer no officer has left the imprint of his personality and character so firmly imbedded in the atmosphere and spirit of West Point.

Be the first to review “Manual of Calisthenic Exercises” Cancel reply