Log In
This book can be found in:
Sports | Boxing & Combat Sports
History 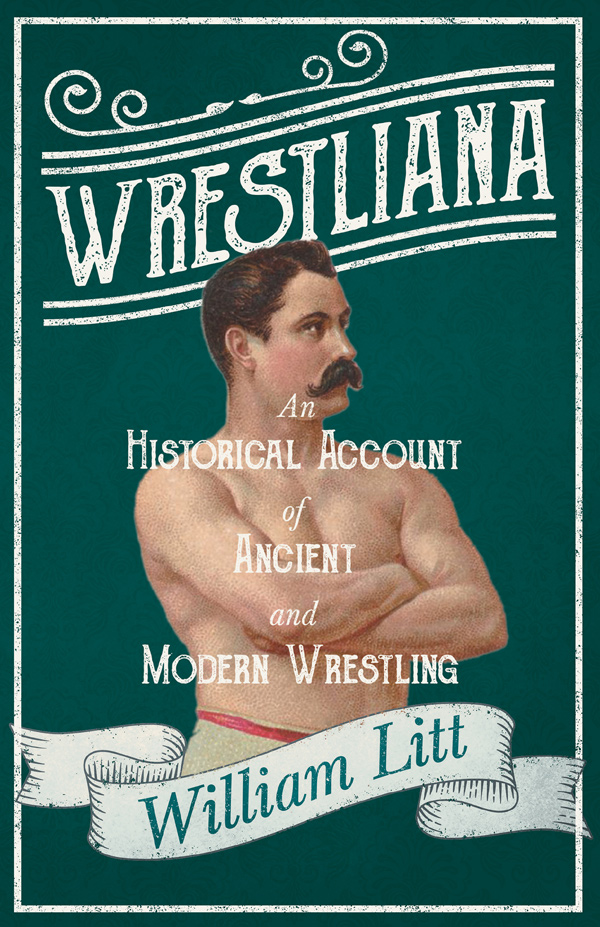 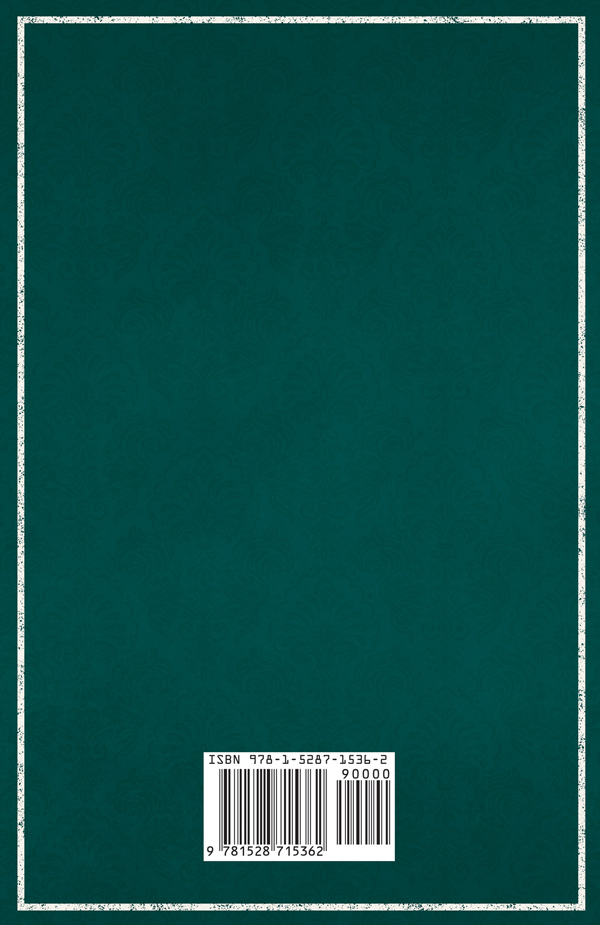 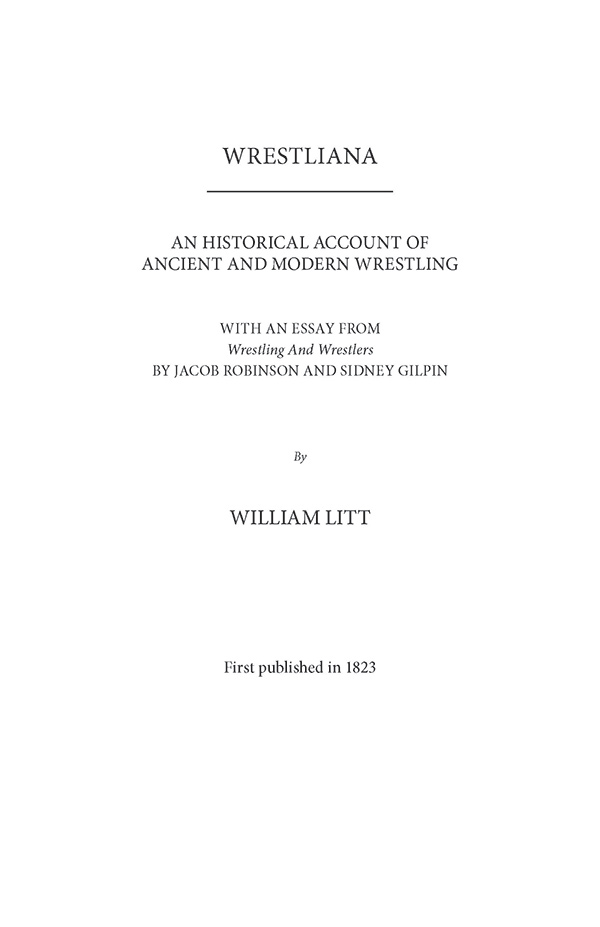 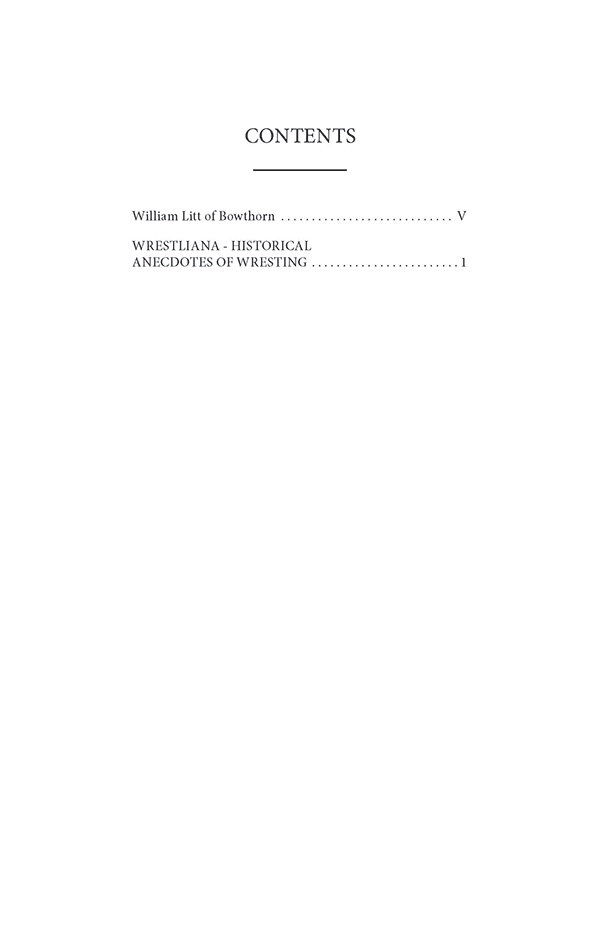 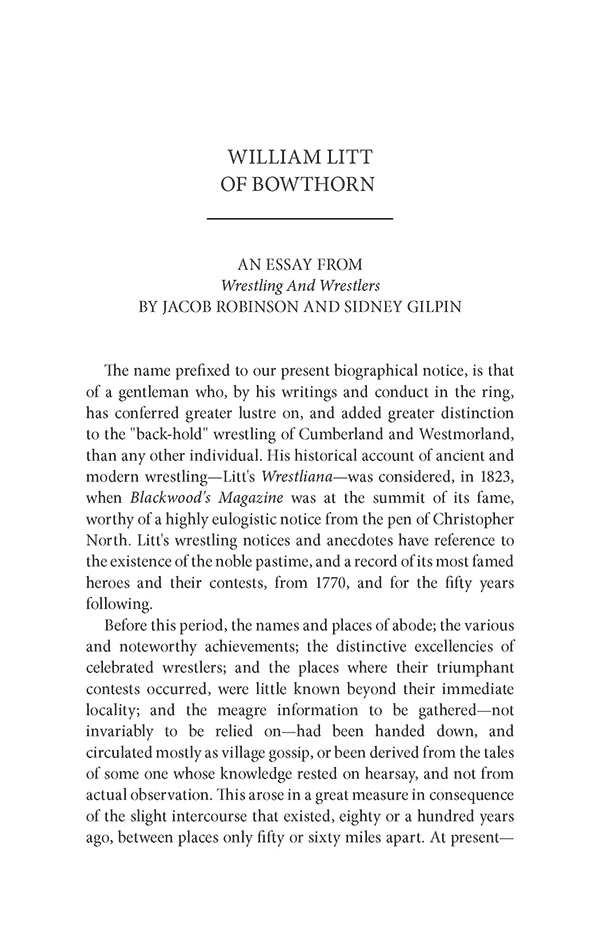 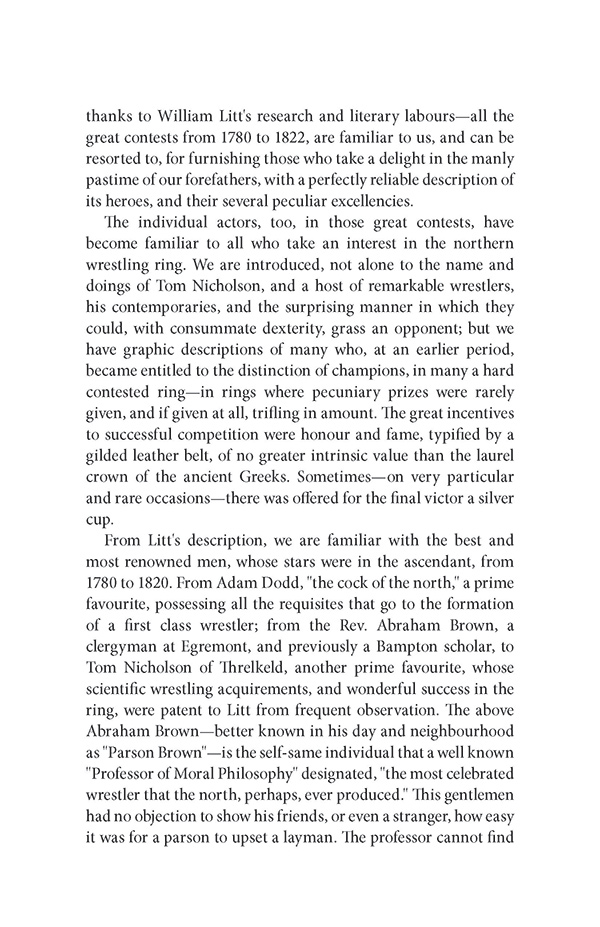 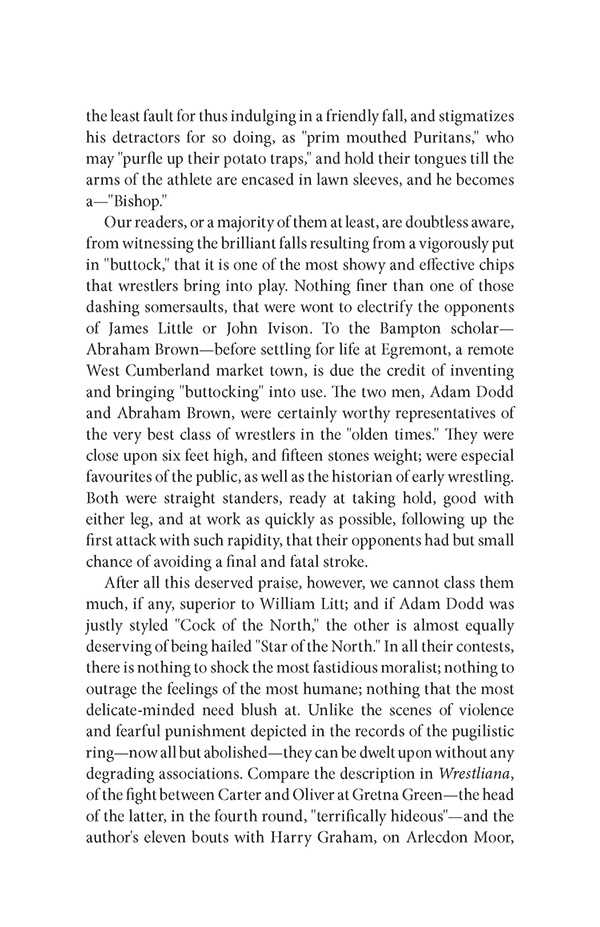 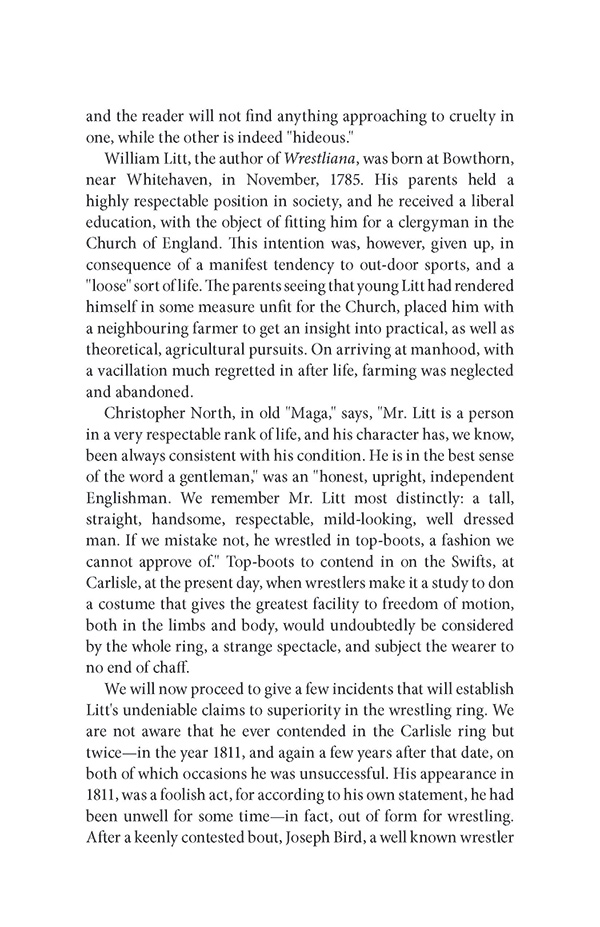 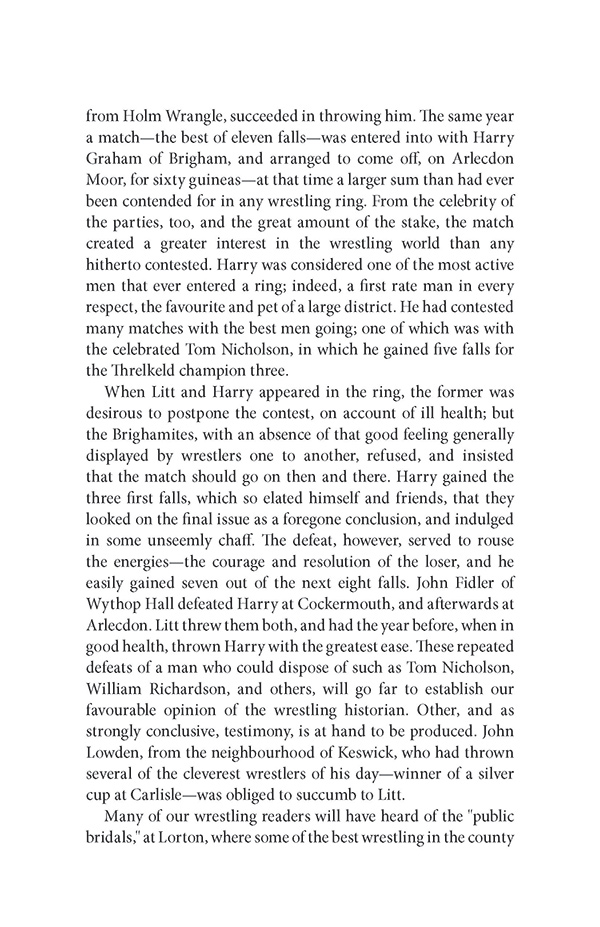 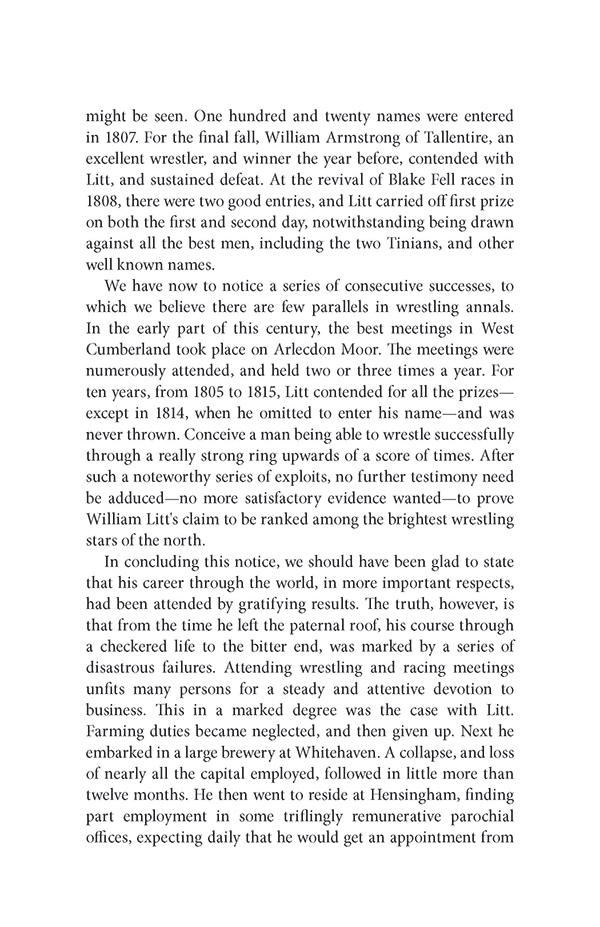 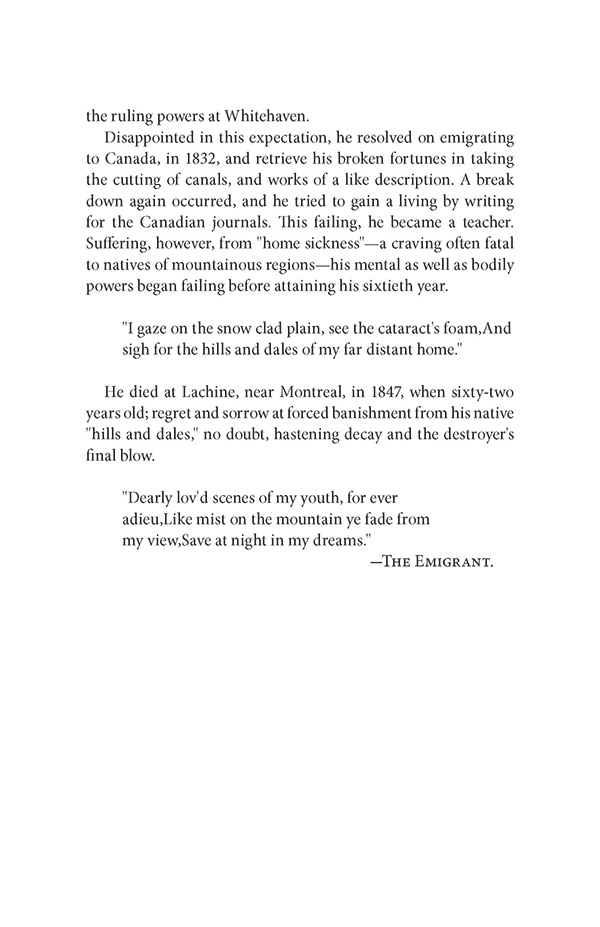 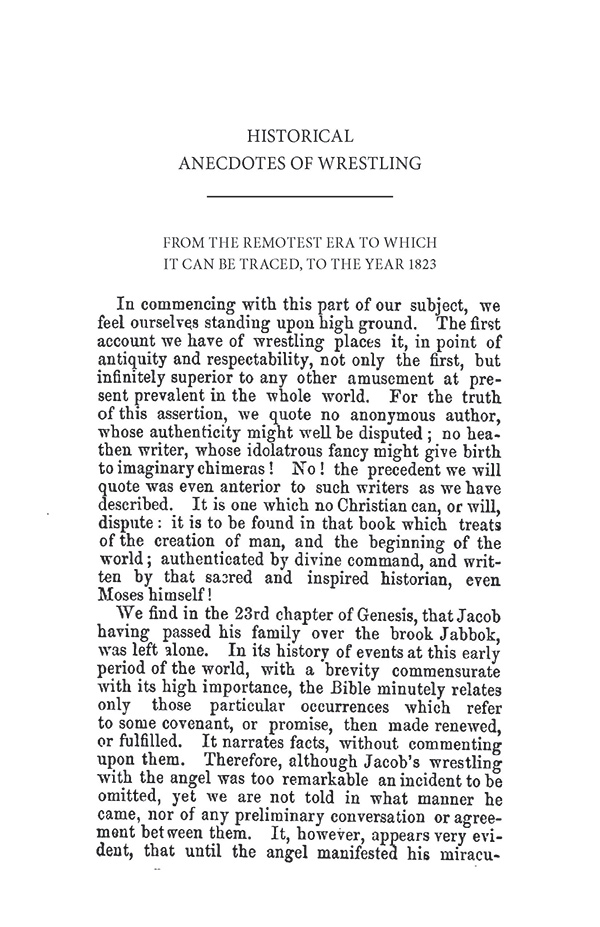 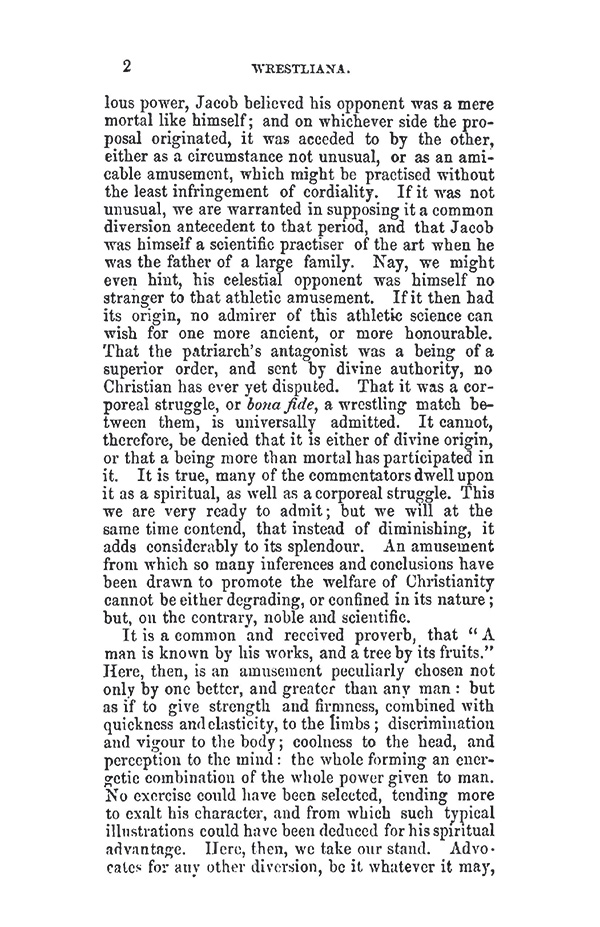 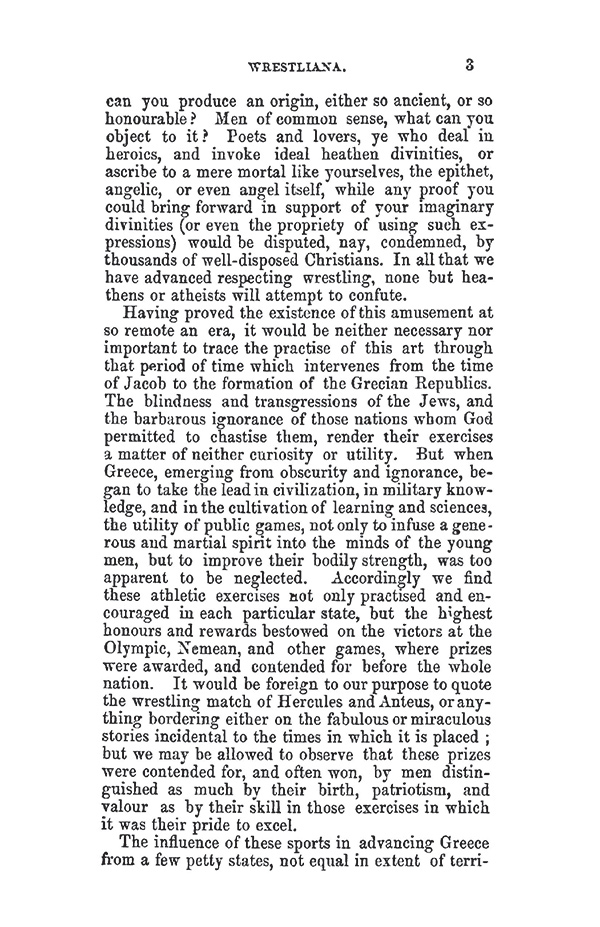 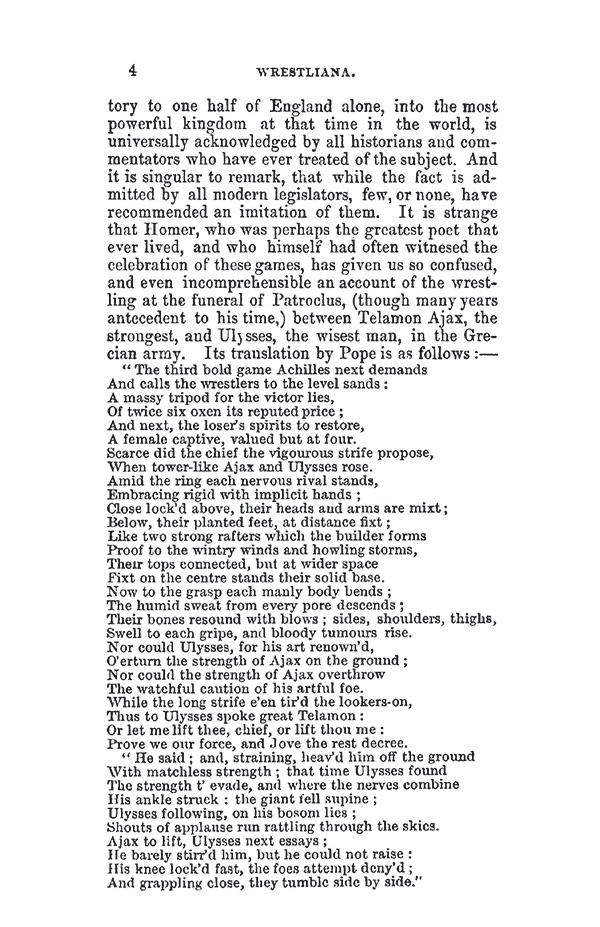 A detailed historical account of wrestling from its ancient origins to its contemporary form. One of the oldest types of combat, wrestling dates back 15,000 years and can be seen in ancient cave drawings. Most of the holds known today were around in the times of ancient Babylon and Egypt, and references in literature include the Old Testament and Indian Vedas. This fascinating volume explores the long and interesting history of wrestling and contains an essay from ‘Wrestling and Wrestlers’, By Jacob Robinson and Sidney Gilpin.

First published in 1823, William Litt’s “Wrestliana” is a detailed historical account of wrestling from its ancient origins to its contemporary form. One of the oldest types of combat, wrestling dates back 15,000 years and can be seen in ancient cave drawings. Most of the holds known today were around in the times of ancient Babylon and Egypt, and references in literature include the Old Testament and Indian Vedas. This fascinating volume explores the long and interesting history of wrestling and contains an essay from ‘Wrestling and Wrestlers’, by Jacob Robinson and Sidney Gilpin. It is not to be missed by those with an interest in the subject.

William Litt is that of a gentleman who, by his writings and conduct in the ring, has conferred greater luster on, and added greater distinction to the "back-hold" wrestling of Cumberland and Westmorland, than any other individual.

Author of Wrestliana, he was born at Bowthorn, near Whitehaven, in November, 1785. His parents held a highly respectable position in society, and he received a liberal education, with the object of fitting him for a clergyman in the Church of England. This intention was, however, given up, inconsequence of a manifest tendency to outdoor sports, and a "loose" sort of life. The parents seeing that young Litt had rendered himself in some measure unfit for the Church, placed him with a neighbouring farmer to get an insight into practical, as well astheoretical, agricultural pursuits.

On arriving at manhood, with a vacillation much regretted in after life, farming was neglected and abandoned. Christopher North, in old Maga, says, "Mr. Litt is a person in a very respectable rank of life, and his character has, we know, been always consistent with his condition. He is in the best sense of the word a gentleman," was an "honest, upright, independent Englishman. We remember Mr. Litt most distinctly: a tall, straight, handsome, respectable, mild-looking, well dressed man. If we mistake not, he wrestled in top-boots, a fashion we cannot approve of." Top-boots to contend in on the Swifts, at Carlisle, at the present day, when wrestlers make it a study to don a costume that gives the greatest facility to freedom of motion, both in the limbs and body, would undoubtedly be considered by the whole ring, a strange spectacle, and subject the wearer to no end of chaff.

We are not aware that he ever contended in the Carlisle ring but twice—in the year 1811, and again a few years after that date, on both of which occasions he was unsuccessful. His appearance in 1811, was a foolish act, for according to his own statement, he had been unwell for some time—in fact, out of form for wrestling. After a keenly contested bout, Joseph Bird, a well known wrestler from Holm Wrangle, succeeded in throwing him. The same year a match—the best of eleven falls—was entered into with Harry Graham of Brigham, and arranged to come off, on Arlecdon Moor, for sixty guineas—at that time a larger sum than had ever been contended for in any wrestling ring. From the celebrity of the parties, too, and the great amount of the stake, the match created a greater interest in the wrestling world than any hitherto contested. Harry was considered one of the most active men that ever entered a ring; indeed, a first rate man in every respect, the favourite and pet of a large district. He had contested many matches with the best men going; one of which was with the celebrated Tom Nicholson, in which he gained five falls for the Threlkeld champion three. When Litt and Harry appeared in the ring, the former was desirous to postpone the contest, on account of ill health; but the Brighamites, with an absence of that good feeling generally displayed by wrestlers one to another, refused, and insisted that the match should go on then and there. Harry gained the three first falls, which so elated himself and friends, that they looked on the final issue as a foregone conclusion, and indulged in some unseemly chaff. The defeat, however, served to rouse the energies—the courage and resolution of the loser, and he easily gained seven out of the next eight falls. John Fidler of Wythop Hall defeated Harry at Cockermouth, and afterwards at Arlecdon. Litt threw them both, and had the year before, when in good health, thrown Harry with the greatest ease. These repeated defeats of a man who could dispose of such as Tom Nicholson, William Richardson, and others, will go far to establish our favourable opinion of the wrestling historian.

One hundred and twenty names were entered in 1807. For the final fall, William Armstrong of Tallentire, an excellent wrestler, and winner the year before, contended with Litt, and sustained defeat. At the revival of Blake Fell races in1808, there were two good entries, and Litt carried off first prize on both the first and second day, not withstanding being drawn against all the best men, including the two Tinians, and other well known names.

In the early part of this century, the best meetings in West Cumberland took place on Arlecdon Moor. The meetings were numerously attended, and held two or three times a year. For ten years, from 1805 to 1815, Litt contended for all the prizes—except in 1814, when he omitted to enter his name—and was never thrown. Conceive a man being able to wrestle successfully through a really strong ring upwards of a score of times. After such a noteworthy series of exploits, no further testimony need be adduced—no more satisfactory evidence wanted—to prove William Litt's claim to be ranked among the brightest wrestling stars of the north.

The truth, however, is that from the time he left the paternal roof, his course through a checkered life to the bitter end, was marked by a series of disastrous failures. Attending wrestling and racing meeting sun fits many persons for a steady and attentive devotion to business. This in a marked degree was the case with Litt. Farming duties became neglected, and then given up. Next he embarked in a large brewery at Whitehaven. A collapse, and loss of nearly all the capital employed, followed in little more than twelve months. He then went to reside at Hensingham, finding part employment in some triflingly remunerative parochial offices, expecting daily that he would get an appointment from the ruling powers at Whitehaven. Disappointed in this expectation, he resolved on emigrating to Canada, in 1832, and retrieve his broken fortunes in taking the cutting of canals, and works of a like description. A breakdown again occurred, and he tried to gain a living by writing for the Canadian journals. This failing, he became a teacher. Suffering, however, from "home sickness"—a craving often fatal to natives of mountainous regions—his mental as well as bodily powers began failing before attaining his sixtieth year.

"I gaze on the snow clad plain, see the cataract's foam,
And sigh for the hills and dales of my far distant home."

He died at Lachine, near Montreal, in 1847, when sixty-two years old; regret and sorrow at forced banishment from his native "hills and dales," no doubt, hastening decay and the destroyer's final blow.

- An Excerpt by Jacob Robinson and Sidney Gilpin,
Wrestling and Wrestlers, 1893

The Secrets of Jujitsu