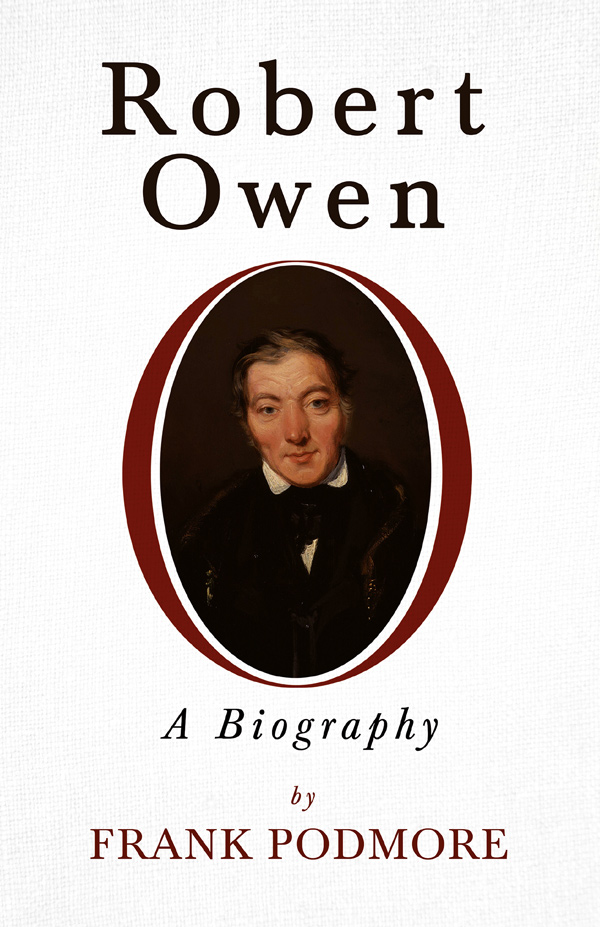 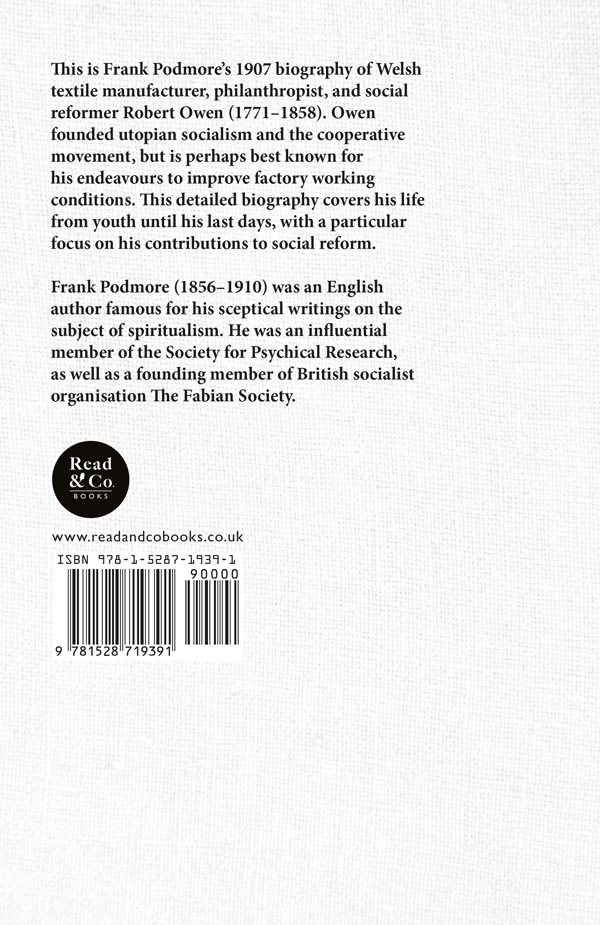 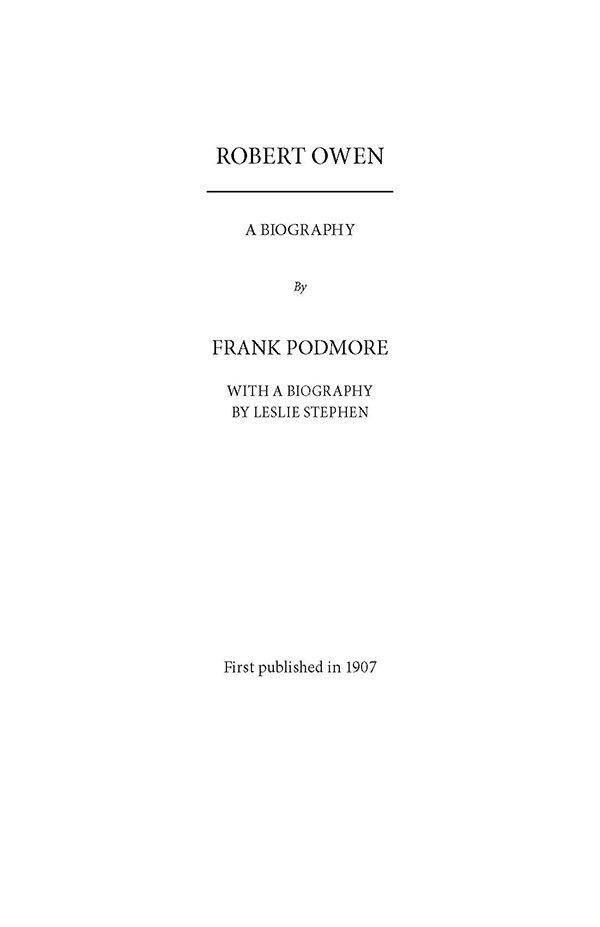 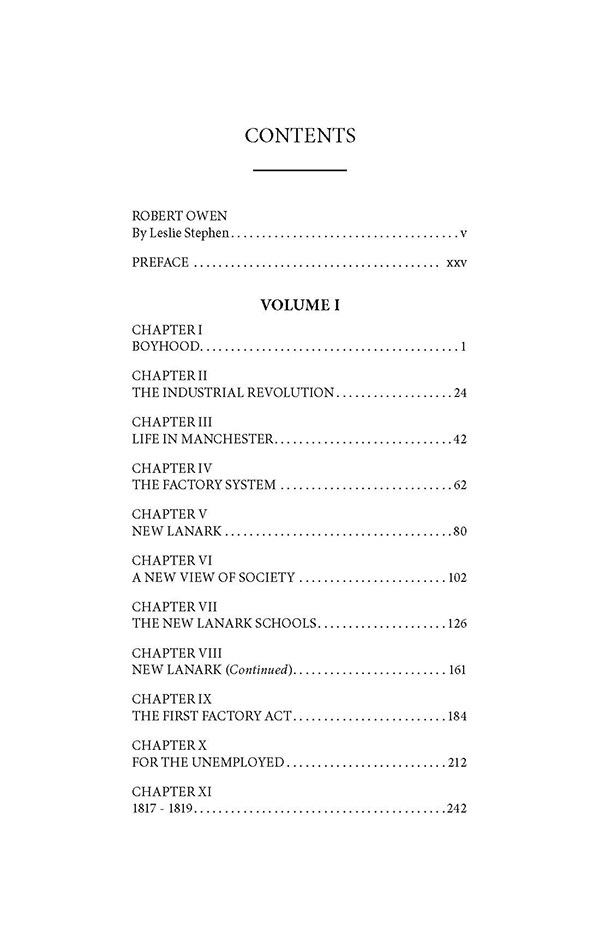 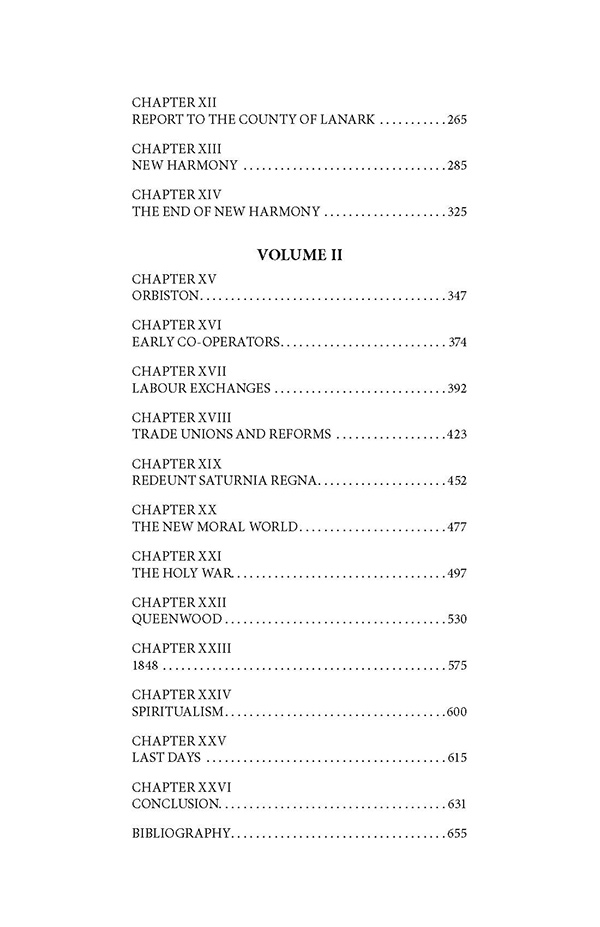 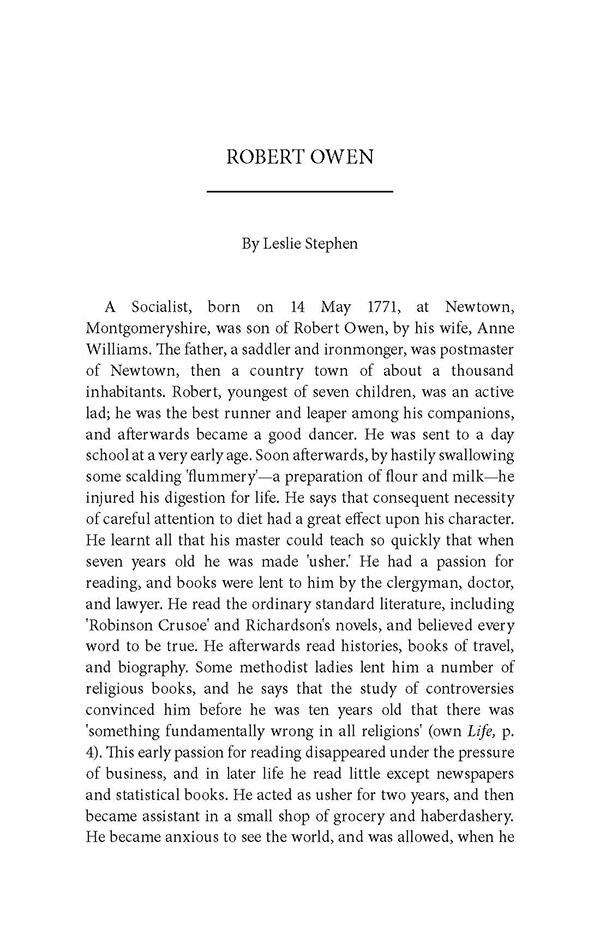 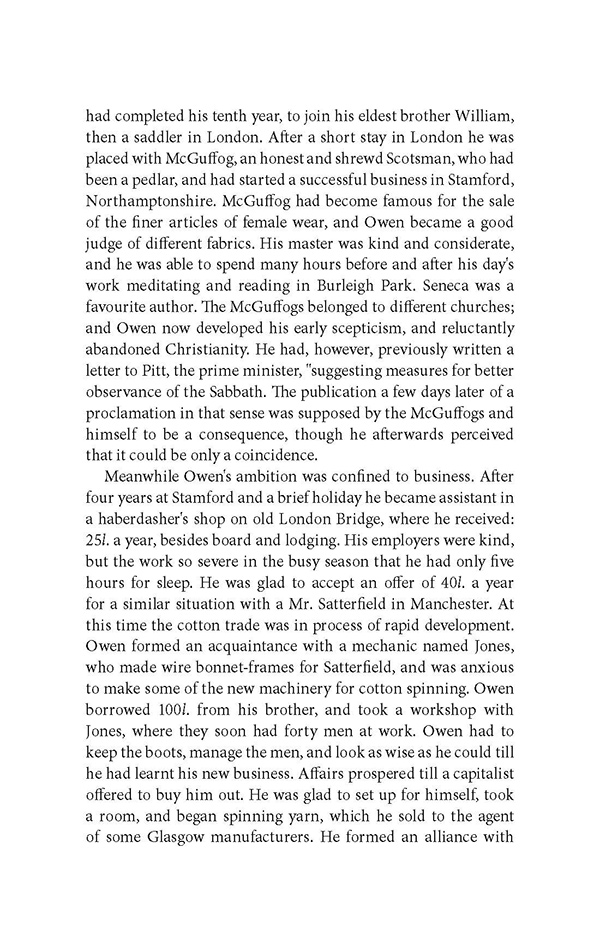 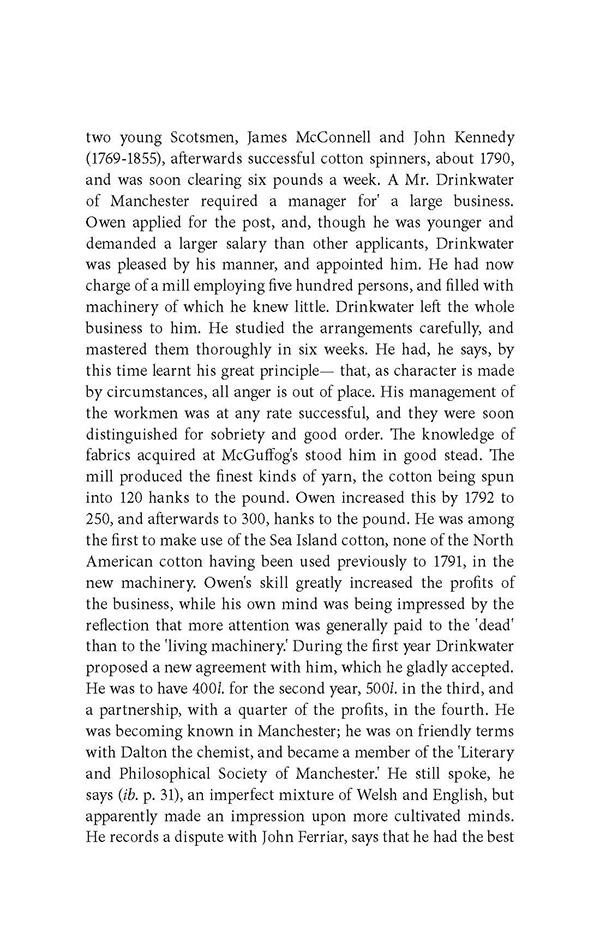 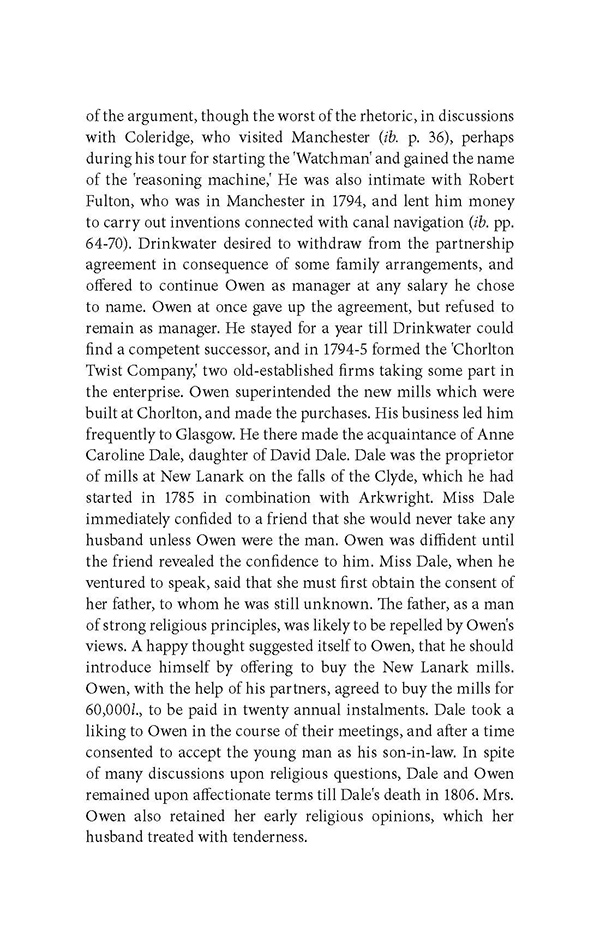 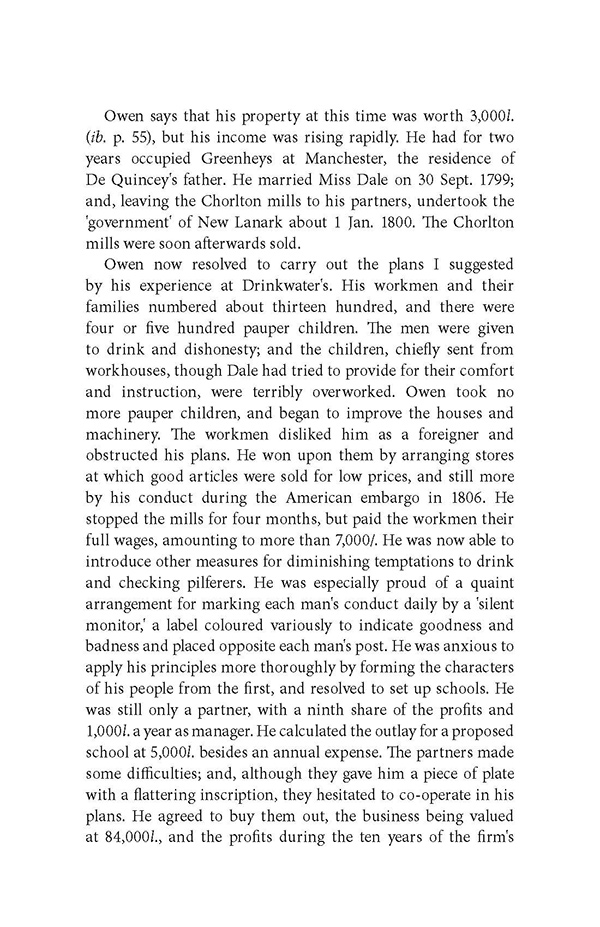 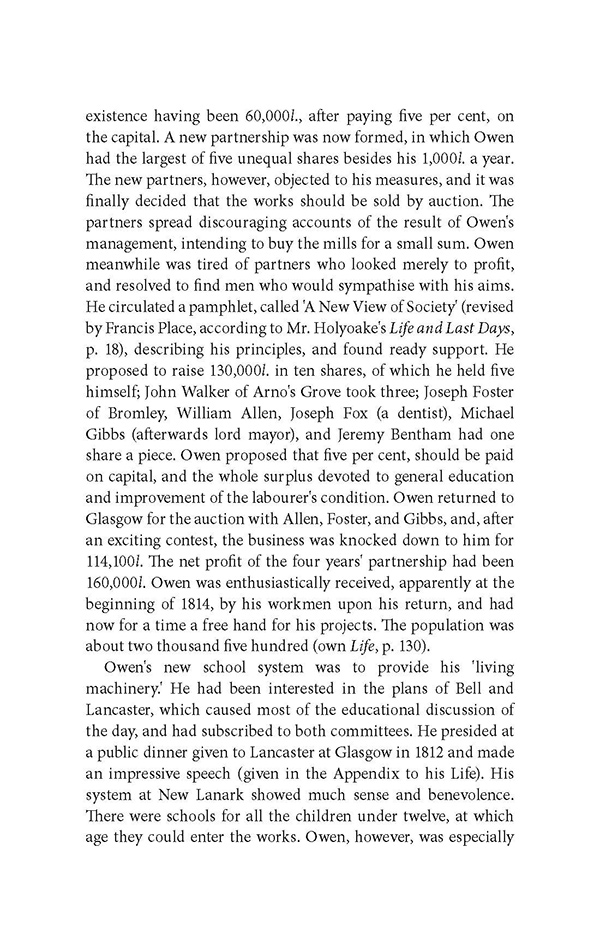 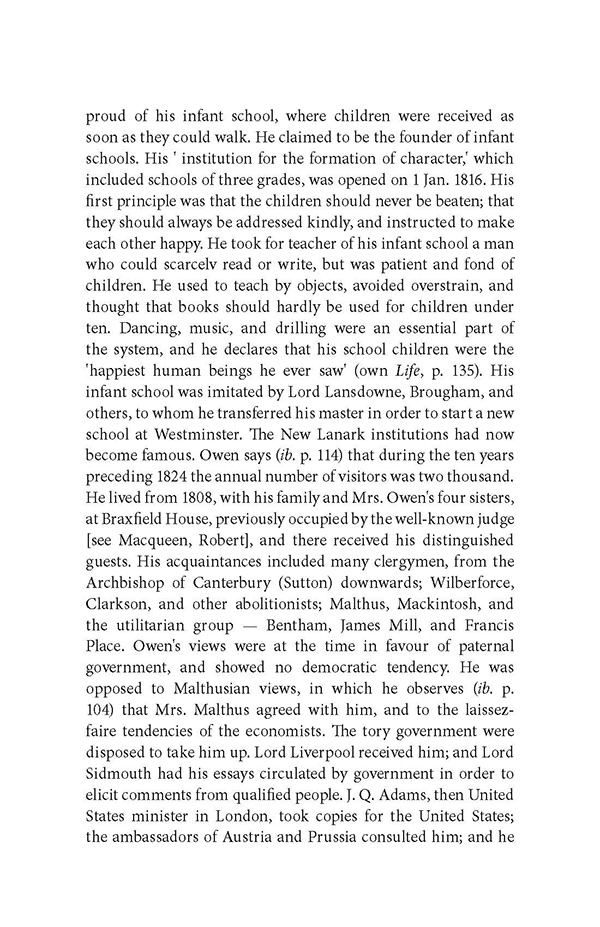 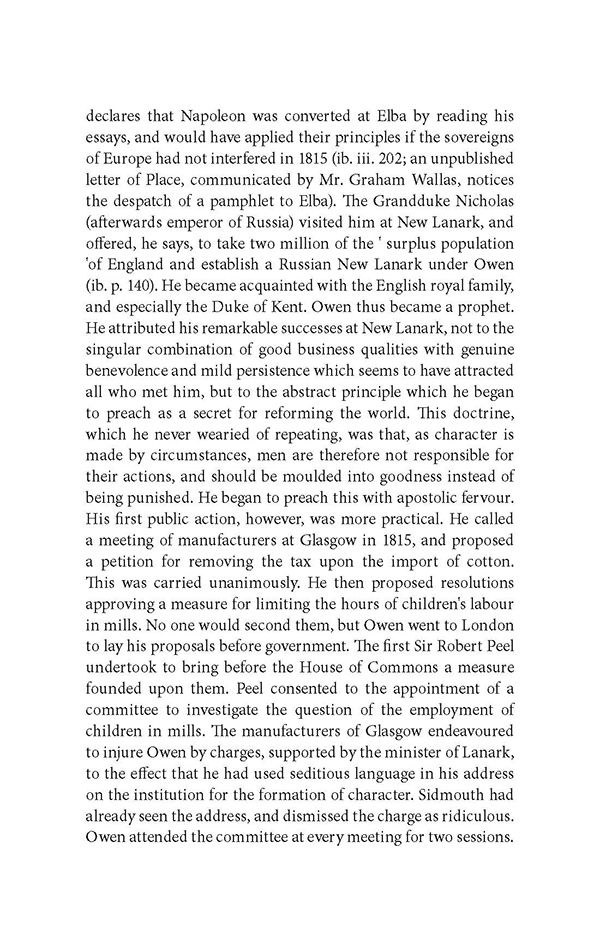 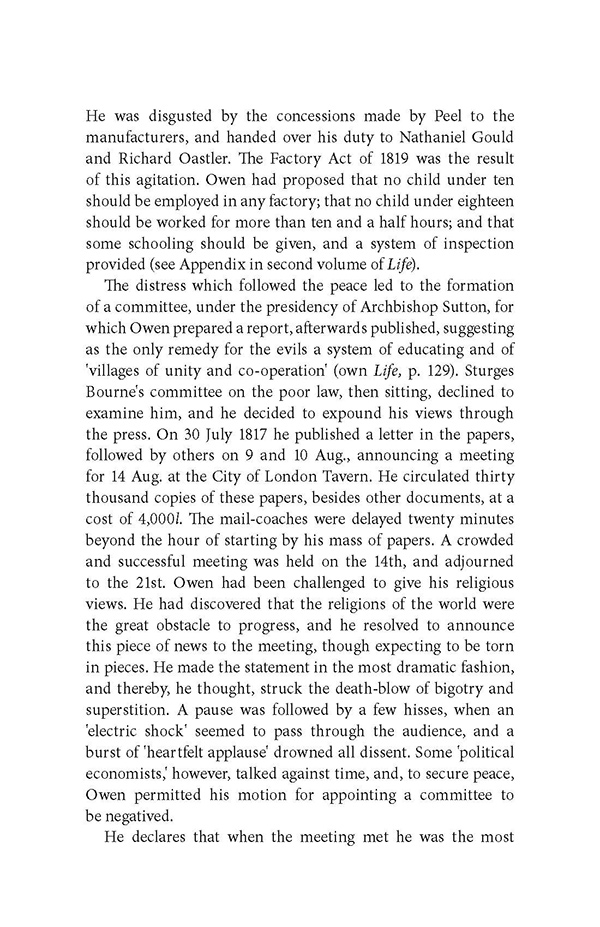 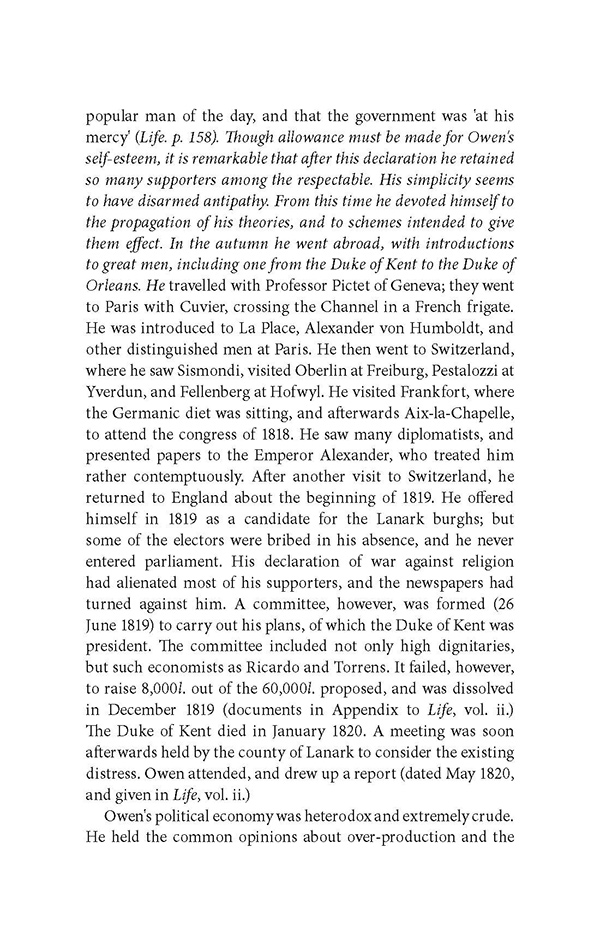 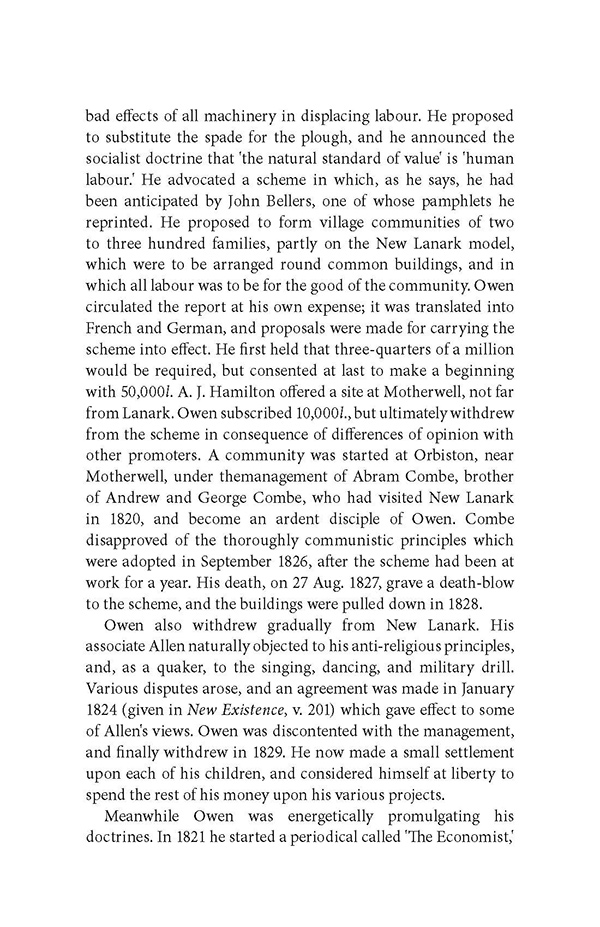 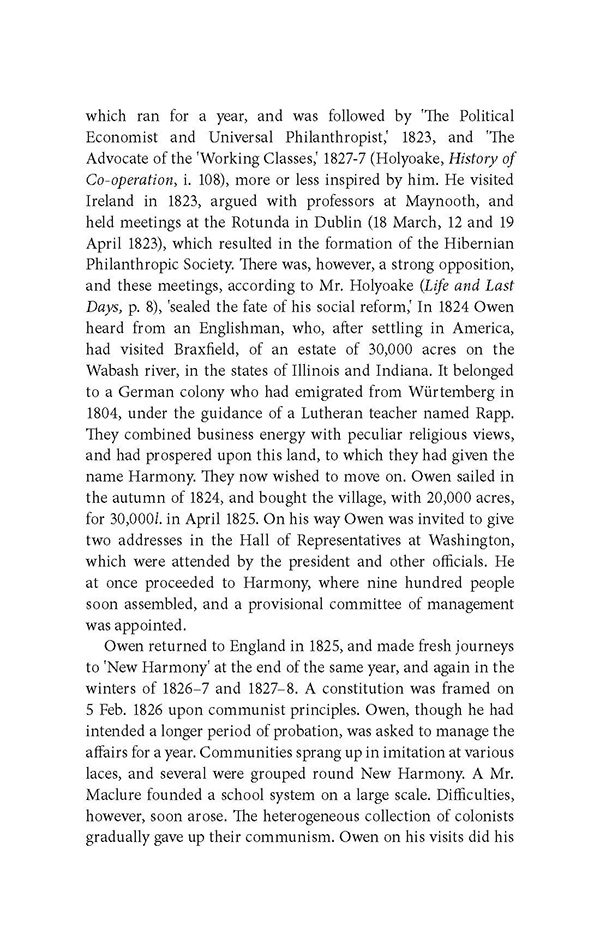 This detailed biography covers Welsh textile manufacturer, philanthropist, and social reformer Robert Owen from youth until his last days, with a particular focus on his contributions to social reform.

This is Frank Podmore’s 1907 biography of Welsh textile manufacturer, philanthropist, and social reformer Robert Owen (1771–1858). Owen founded utopian socialism and the cooperative movement, but is perhaps best known for his endeavours to improve factory working conditions. This detailed biography covers his life from youth until his last days, with a particular focus on his contributions to social reform. Contents include: “Boyhood”, “The Industrial Revolution”, “Life in Manchester”, “The Factory System”, “New Lanark”, “A New View of Society”, “The New Lanark Schools”, “New Lanark (Continued)”, “The First Factory Act”, “For the Unemployed”, “1817 – 1819”. etc. Frank Podmore (1856–1910) was an English author famous for his sceptical writings on the subject of spiritualism. He was an influential member of the Society for Psychical Research, as well as a founding member of British socialist organisation The Fabian Society. Other notable works by this author include: “Mesmerism and Christian Science”(1909), “Telepathic Hallucinations: The New View of Ghosts” (1909), and “The Newer Spiritualism.” (1910). Read & Co. History is republishing this classic biography now in a new facsimile edition complete with an introductory chapter by Leslie Stephen from “Dictionary of National Biography, 1885-1900, Volume 42”.

A writer on psychical research. He was born at Elstree, Hertfordshire, on 5 Feb. 1855 and was the third son of the Rev. Thompson Podmore, at one time headmaster of Eastbourne College, by his wife Georgina Elizabeth, daughter of George Gray Barton and Sarah Barton. Educated first at Elstree Hill school (1863-8), Frank won a scholarship at Haileybury, leaving in 1874 with a classical scholarship at Pembroke College, Oxford. At Oxford he obtained a second class in classical moderations (1875) and a first class in natural science (1877). In 1879 he was appointed to a higher division clerkship in the secretary's department of the post office. This position he held till 1907, when he retired without a pension.

Through life Podmore was keenly interested in psychical research. At Oxford he had studied spiritualistic phenomena, had contributed papers to Human Nature (the spiritualist organ) in 1875 and 1876, and had placed unqualified confidence in a slate-writing performance of the medium Slade. In 1880 however he changed his attitude and announced to the National Association of Spiritualists that he had become skeptical about spiritualistic doctrine. He was a member of the council of the Society for Psychical Research from 17 March 1882 until his resignation in May 1909. In that capacity he argued for theories of psychological, as opposed to spiritualist, causality, and for a far-reaching application of the hypothesis of telepathy. He became 'sceptic-in-chief' concerning spirit agency, and the official advocatus diaboli when the society undertook to adjudicate on the claim to authenticity of spiritualistic phenomena. His hostility was criticised by F. C. S. Schiller (Mind, N.S. no. 29) and by Andrew Lang.

Podmore helped in compiling the census of hallucinations which the society began in 1889 (Report in Proceedings, vol. x. 1894), and with Edmund Gurney and F. W. H. Myers, he assisted in preparing Phantasms of the Living (1886), an encyclopædic collection of tested evidence. In Modern Spiritualism (1902) and The Newer Spiritualism (posthumously issued, 1910) he critically studied the history of spiritualist manifestations from the seventeenth century onwards, and incidentally contested Myers' doctrine of the subliminal self in relation to human personality and its survival after death.

Podmore was one of the founders and members of the first executive committee of the Fabian Society, the title of which he apparently originated (4 Jan. 1884). He helped to prepare an early, and now rare, report on government organisation of unemployed labour, to which Sidney Webb also contributed. His rooms at 14 Dean's Yard, Westminster, were frequently the place of meeting. He wrote none of the Fabian Tracts, and his interest in 'social reconstruction' bore its chief fruit in his full biography of Robert Owen the socialist and spiritualist in 1906.

In 1907 Podmore left London for Broughton near Kettering, a parish of which his brother, Claude Podmore, was rector. He died by drowning in the New Pool, Malvern, where he was making a short stay, on 14 Aug. 1910. The jury returned a verdict of 'found drowned.' He was buried at Malvern Wells cemetery.

Podmore married on 11 June 1891 Eleanore, daughter of Dr. Bramwell of Perth, and sister of Dr. Milne Bramwell, a well-known investigator of the therapeutic aspect of hypnotism. In his later years Podmore lived apart from his wife; there was no issue. A civil list pension of 60l. was granted his widow in 1912.

The Life of Robert Owen, Philanthropist and Social Reformer

The Conquest of Bread