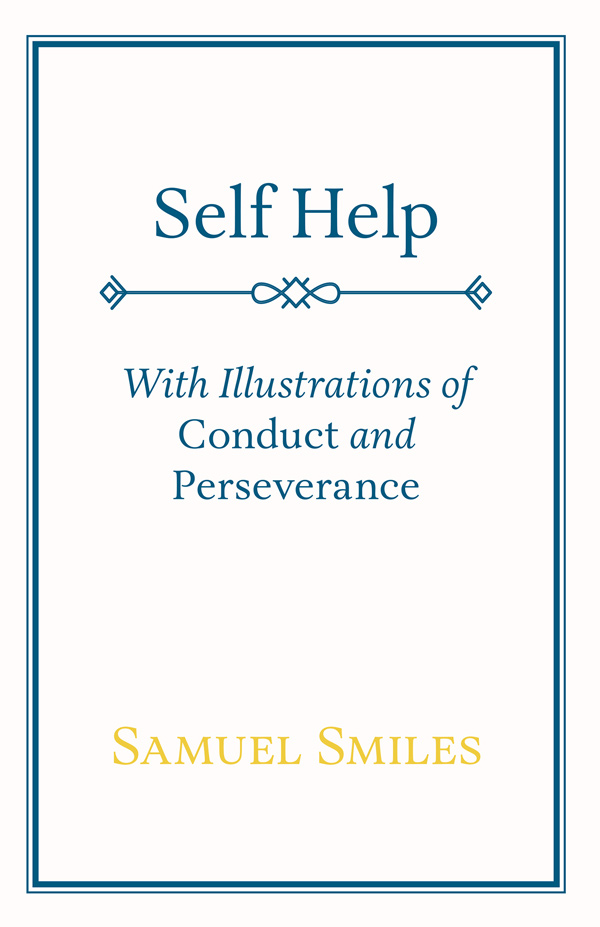 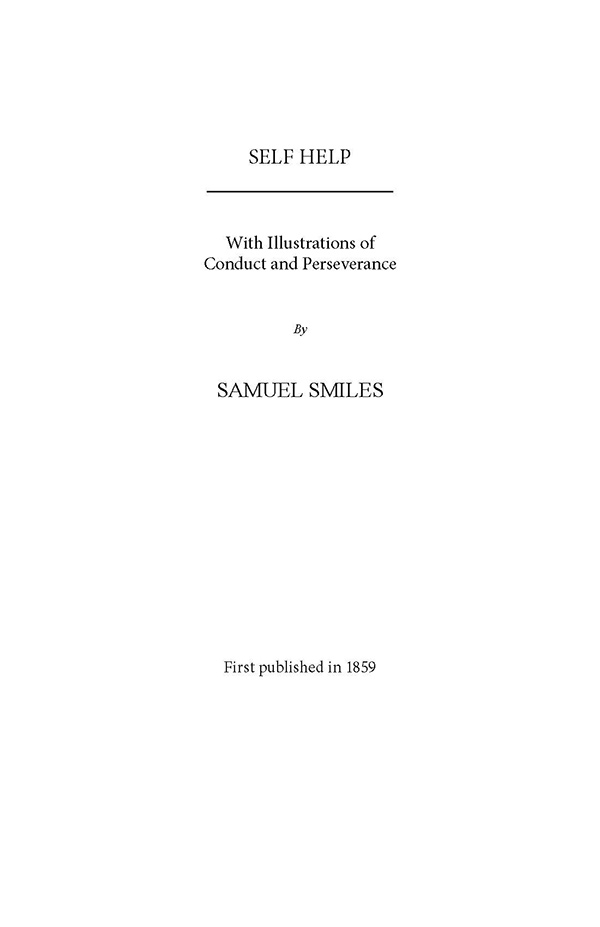 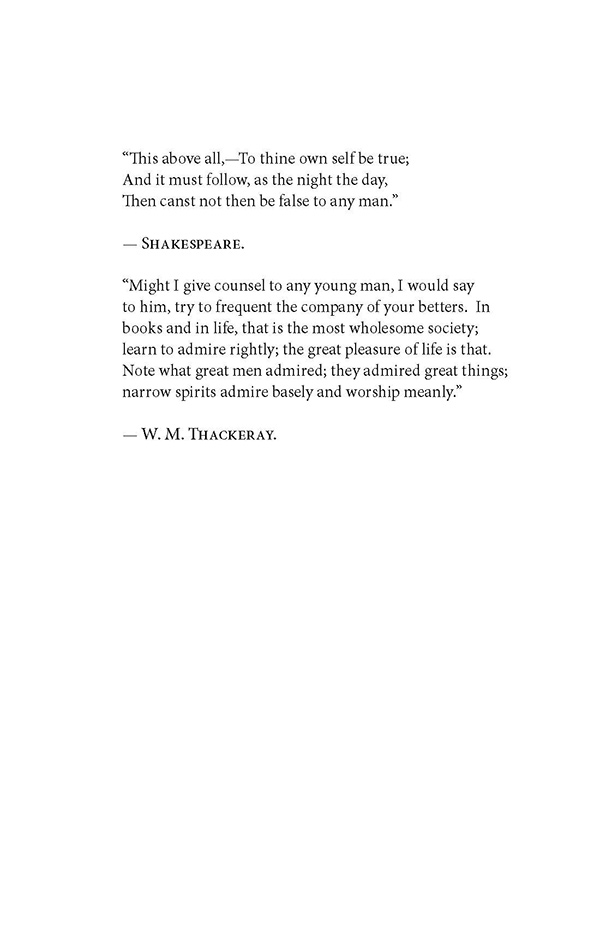 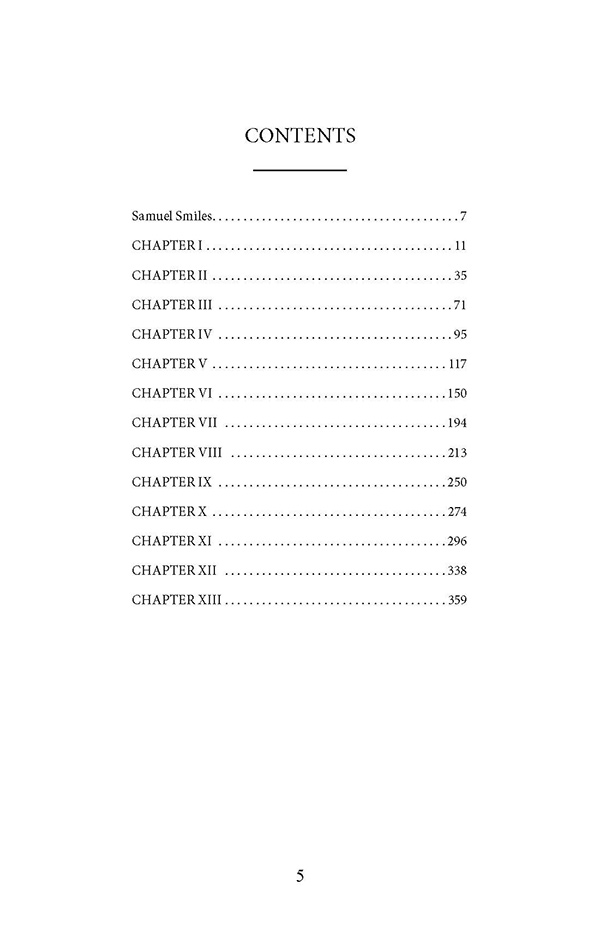 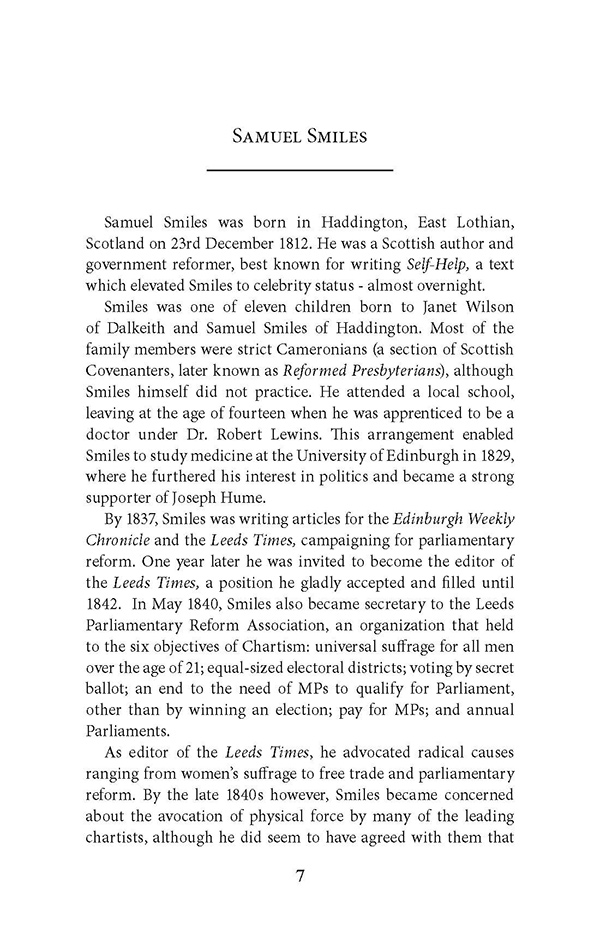 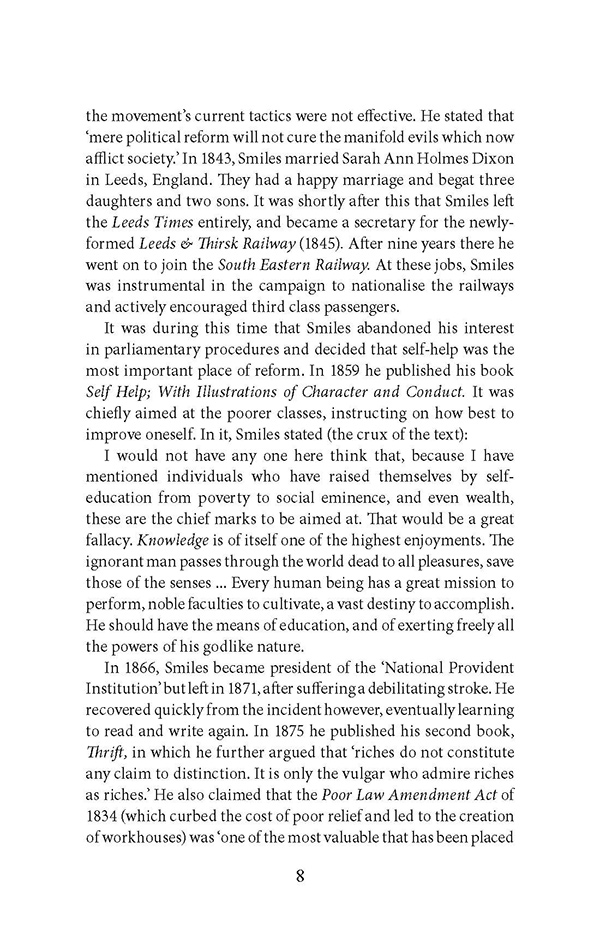 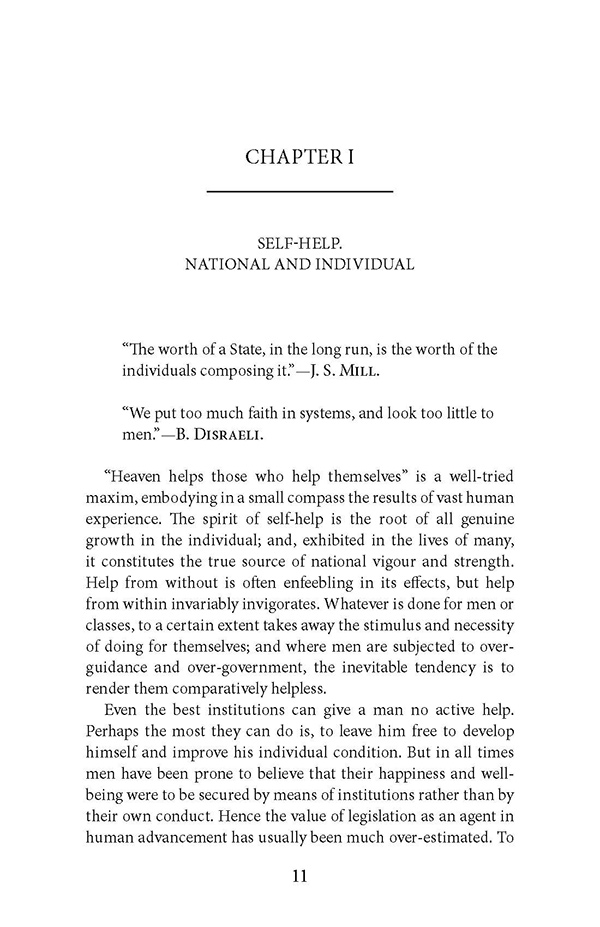 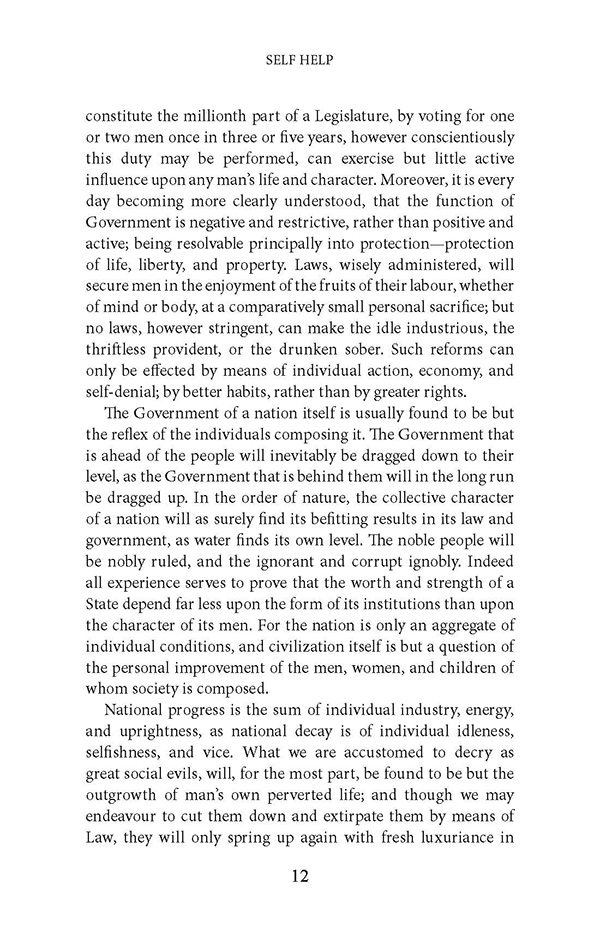 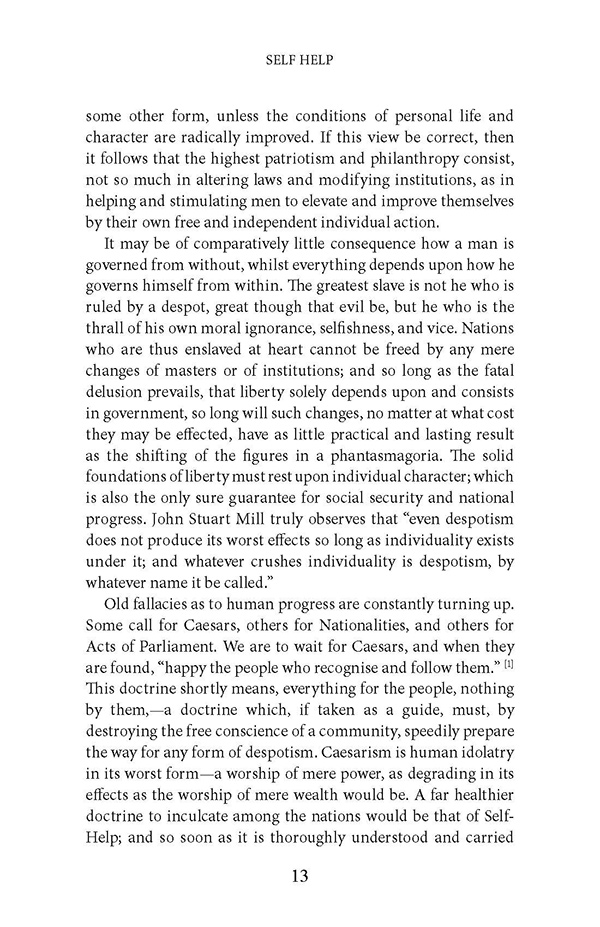 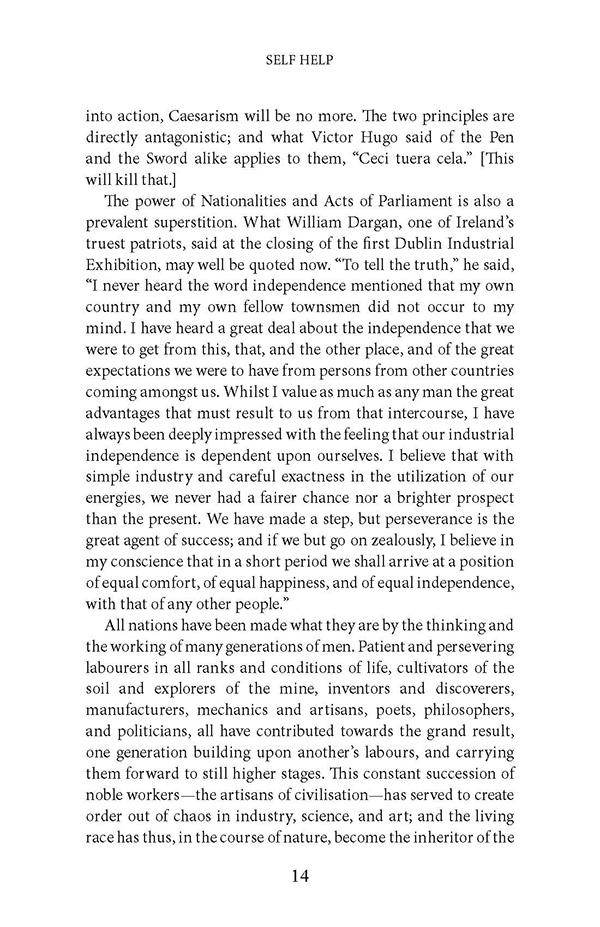 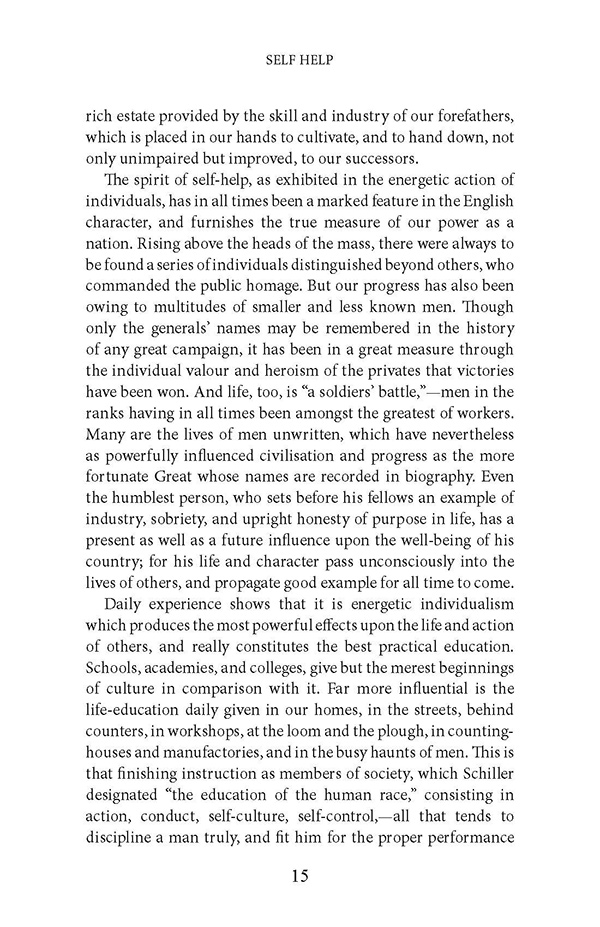 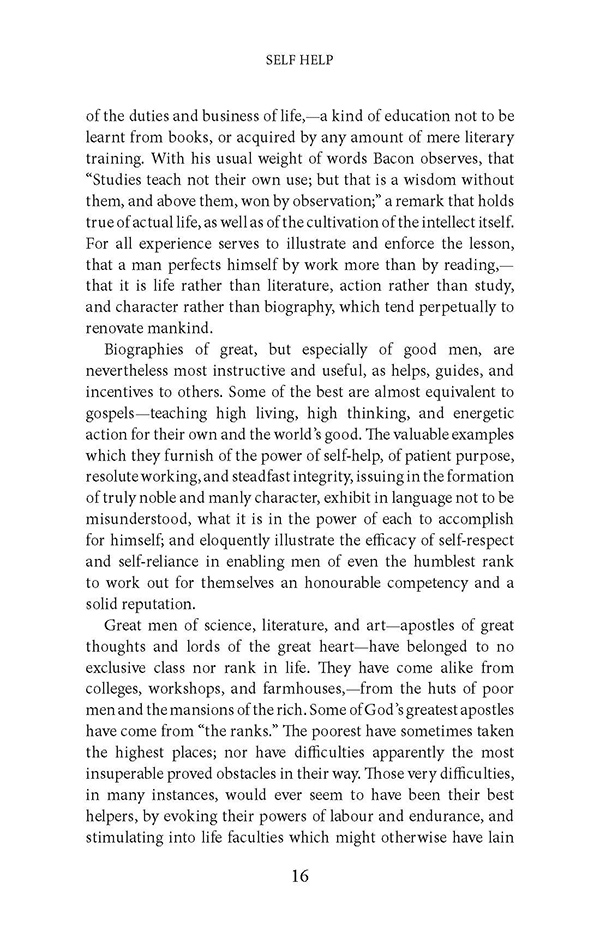 With Illustrations of Conduct and Perseverance

This volume is considered Smiles’ masterpiece, within which he promotes thrift and argues that poverty is the result of irresponsible habits, materialism, and laissez-faire government. It is hailed as “the bible of mid-Victorian liberalism” and brought wide renown to Smiles overnight.

Samuel Smiles (1812 – 1904) was a Scottish government reformer and author famous for arguing that progress can only arise from adapting to new attitudes and not by creating new laws. This volume is considered his masterpiece, within which he promotes thrift and argues that poverty is the result of irresponsible habits, materialism, and laissez-faire government. It is hailed as “the bible of mid-Victorian liberalism” and brought wide renown to Smiles overnight. Other notable works by this author include: “Character” (1871), “Thrift” (1875), and “Duty” (1880). Contents include: “Self-Help: National and Individual”, “Leaders of Industry: Inventors and Producers”, “The Great Potters: Palissy, Bottgher, Wedgewood”, “Application and Perseverance”, “Helps and Opportunities: Scientific Pursuits”, “Workers in Art”, “Industry and the Peerage”, etc. Many vintage books such as this are becoming increasingly scarce and expensive. We are republishing this volume now in an affordable, modern, high-quality edition complete with the original text and artwork.

Samuel Smiles was born in Haddington, East Lothian, Scotland on 23rd December 1812. He was a Scottish author and government reformer, best known for writing Self-Help, a text which elevated Smiles to celebrity status - almost overnight.

Smiles was one of eleven children born to Janet Wilson of Dalkeith and Samuel Smiles of Haddington. Most of the family members were strict Cameronians (a section of Scottish Covenanters, later known as Reformed Presbyterians), although Smiles himself did not practice. He attended a local school, leaving at the age of fourteen when he was apprenticed to be a doctor under Dr. Robert Lewins. This arrangement enabled Smiles to study medicine at the University of Edinburgh in 1829, where he furthered his interest in politics and became a strong supporter of Joseph Hume.

By 1837, Smiles was writing articles for the Edinburgh Weekly Chronicle and the Leeds Times, campaigning for parliamentary reform. One year later he was invited to become the editor of the Leeds Times, a position he gladly accepted and filled until 1842.  In May 1840, Smiles also became secretary to the Leeds Parliamentary Reform Association, an organization that held to the six objectives of Chartism: universal suffrage for all men over the age of 21; equal-sized electoral districts; voting by secret ballot; an end to the need of MPs to qualify for Parliament, other than by winning an election; pay for MPs; and annual Parliaments.

As editor of the Leeds Times, he advocated radical causes ranging from women's suffrage to free trade and parliamentary reform. By the late 1840s however, Smiles became concerned about the avocation of physical force by many of the leading chartists, although he did seem to have agreed with them that the movement's current tactics were not effective. He stated that 'mere political reform will not cure the manifold evils which now afflict society.' In 1843, Smiles married Sarah Ann Holmes Dixon in Leeds, England. They had a happy marriage and begat three daughters and two sons. It was shortly after this that Smiles left the Leeds Times entirely, and became a secretary for the newly-formed Leeds & Thirsk Railway (1845). After nine years there he went on to join the South Eastern Railway. At these jobs, Smiles was instrumental in the campaign to nationalise the railways and actively encouraged third class passengers.

It was during this time that Smiles abandoned his interest in parliamentary procedures and decided that self-help was the most important place of reform. In 1859 he published his book Self Help; With Illustrations of Character and Conduct. It was chiefly aimed at the poorer classes, instructing on how best to improve oneself. In it, Smiles stated (the crux of the text):

I would not have any one here think that, because I have mentioned individuals who have raised themselves by self-education from poverty to social eminence, and even wealth, these are the chief marks to be aimed at. That would be a great fallacy. Knowledge is of itself one of the highest enjoyments. The ignorant man passes through the world dead to all pleasures, save those of the senses ... Every human being has a great mission to perform, noble faculties to cultivate, a vast destiny to accomplish. He should have the means of education, and of exerting freely all the powers of his godlike nature.

In 1866, Smiles became president of the 'National Provident Institution' but left in 1871, after suffering a debilitating stroke. He recovered quickly from the incident however, eventually learning to read and write again. In 1875 he published his second book, Thrift, in which he further argued that 'riches do not constitute any claim to distinction. It is only the vulgar who admire riches as riches.' He also claimed that the Poor Law Amendment Act of 1834 (which curbed the cost of poor relief and led to the creation of workhouses) was 'one of the most valuable that has been placed on the statute-book in modern times.' Smiles further argued against the Second Irish Home Rule Bill, which came into effect in 1892 when Gladstone returned to power - imploring his sons not to rebel with the 'Ulstermen.'

Samuel Smiles died on 16th April 1904 in Kensington, London. He is buried in Brompton Cemetery, near Earl's Court in West London. Smile's grandchildren include Sir Walter Smiles, an Ulster Unionist Party MP. Through this branch of the family, Smiles is also the great-great-grandfather of Bear Grylls, a famed adventurer.

Be the first to review “Self Help” Cancel reply

Further Contributions to the Theory and Technique of Psychoanalysis

The Task of Social Hygiene