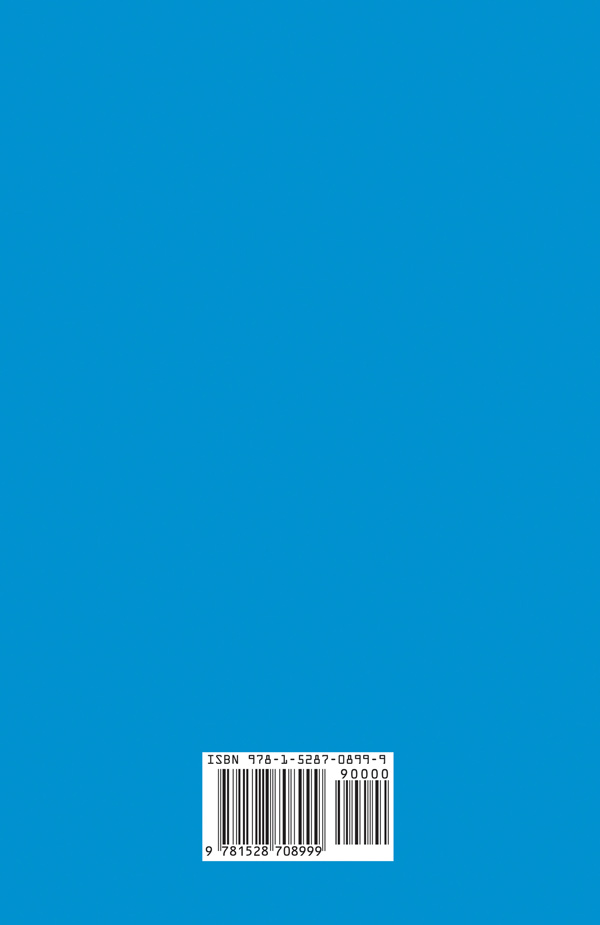 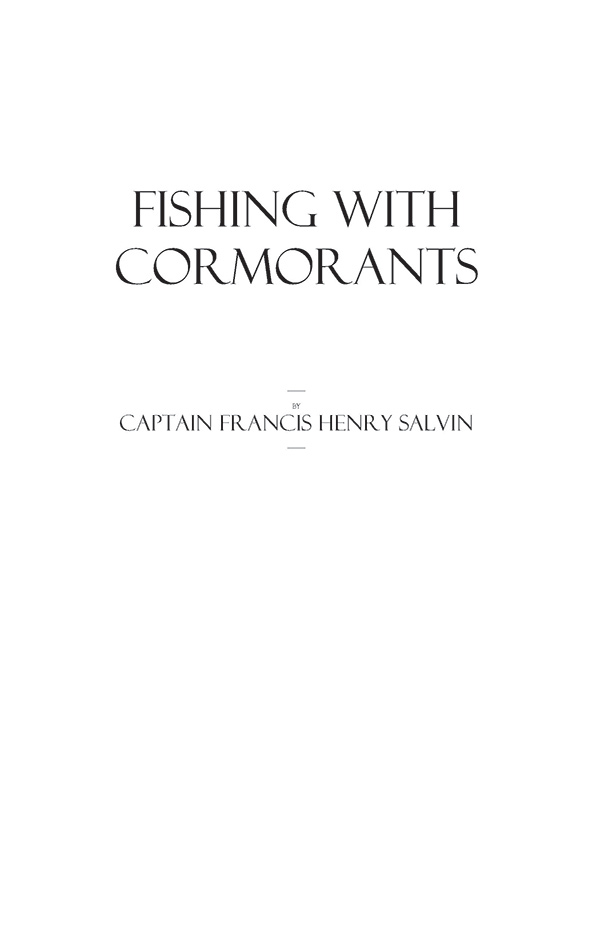 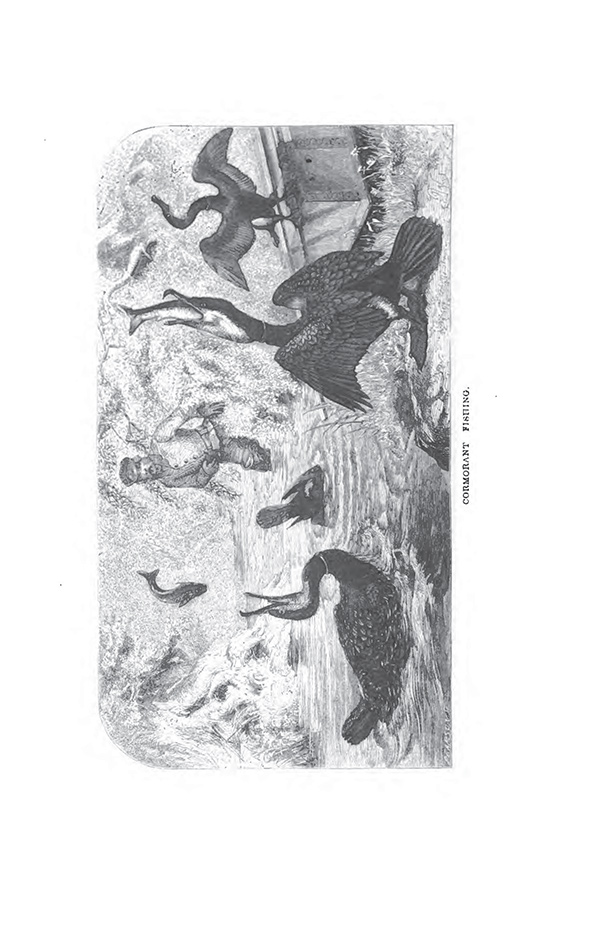 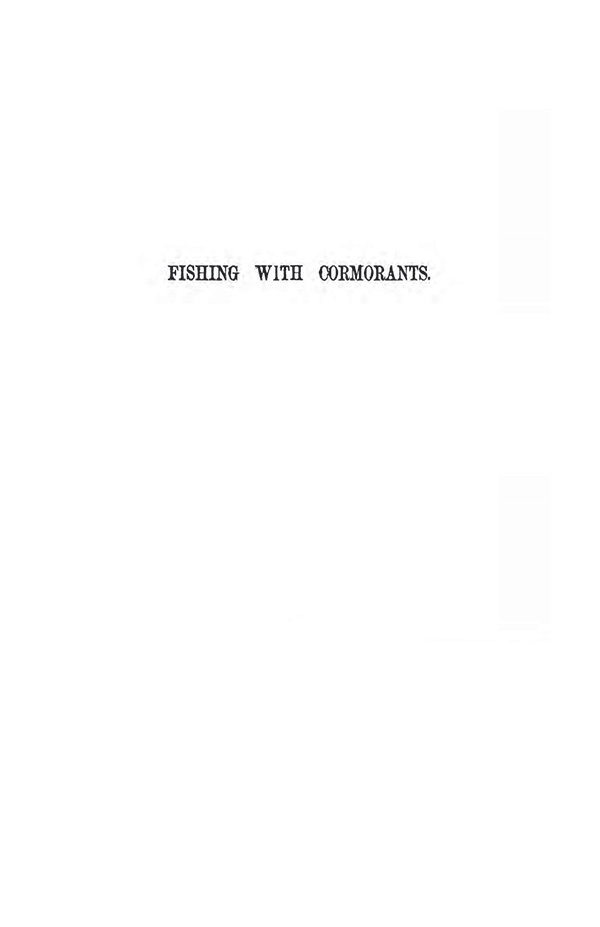 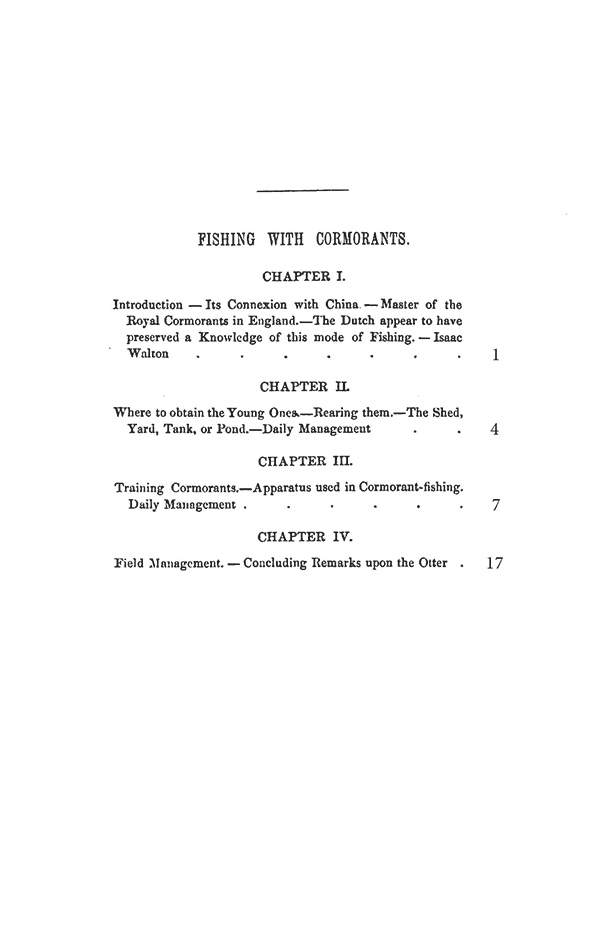 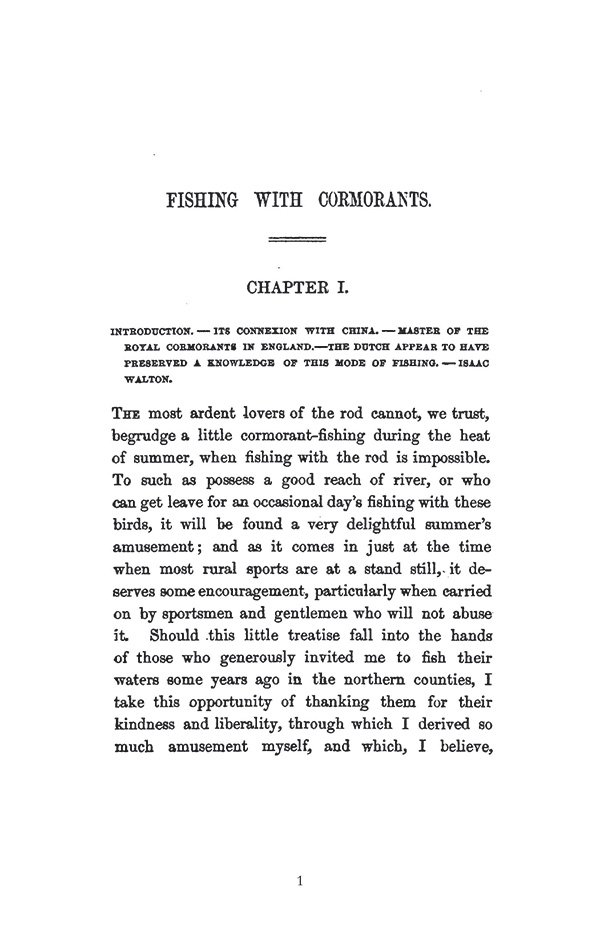 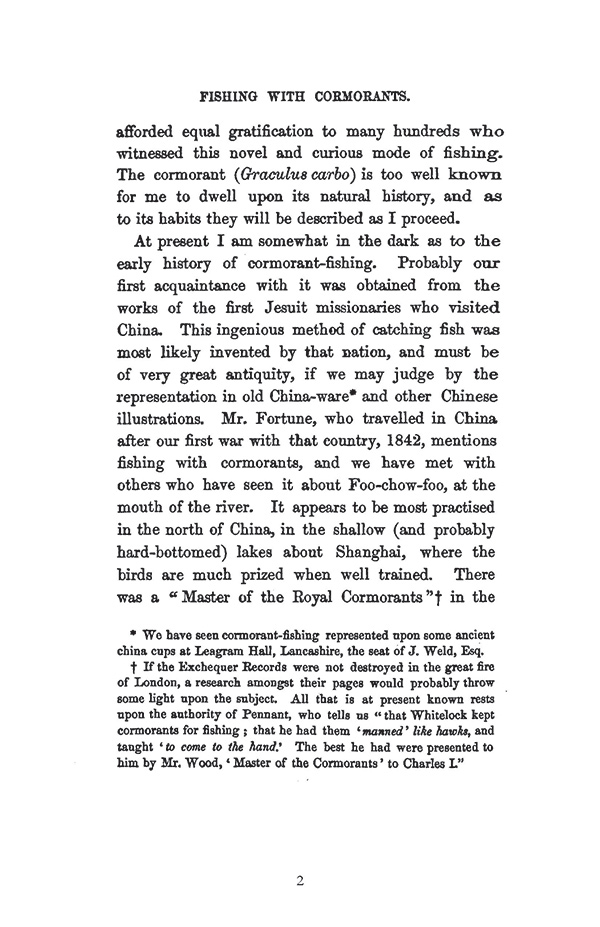 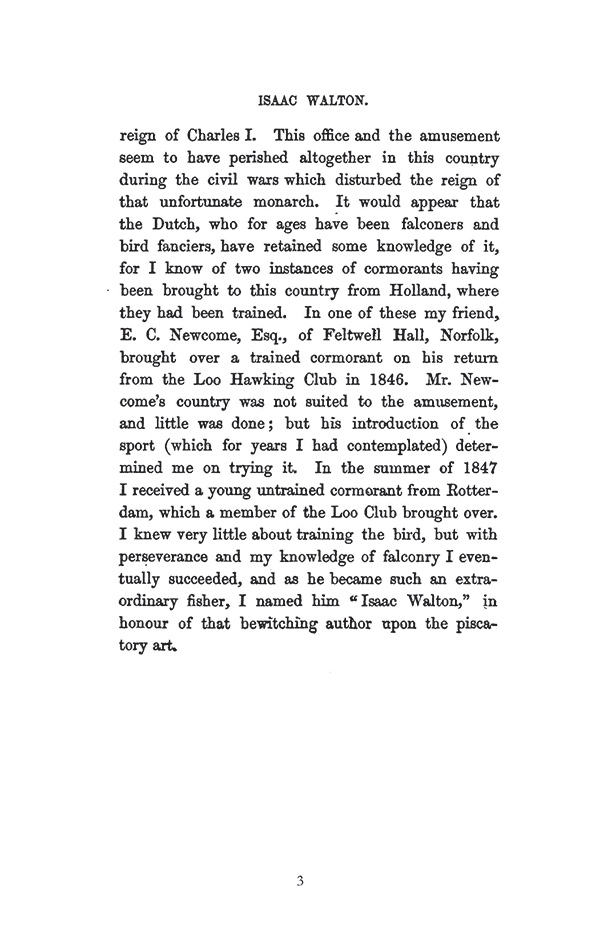 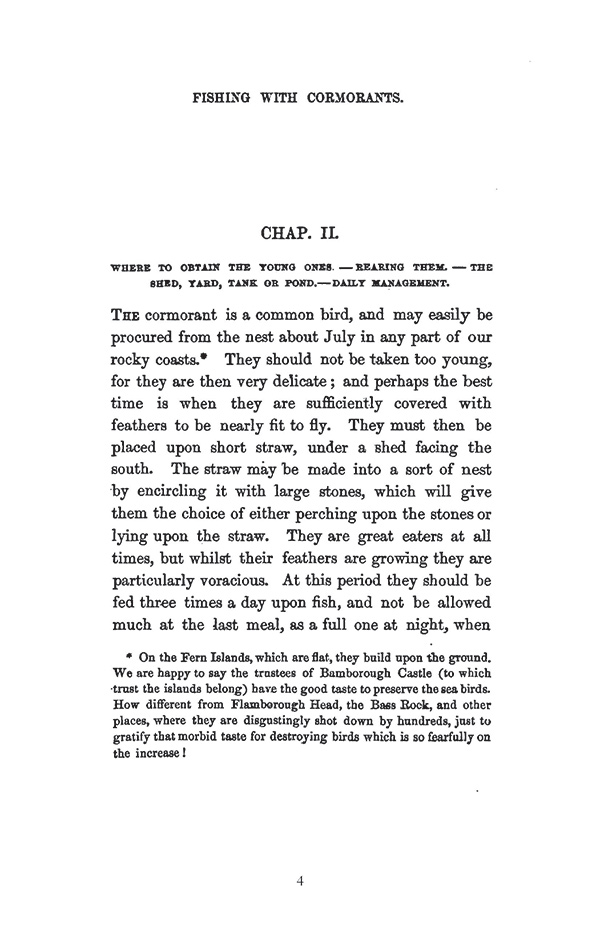 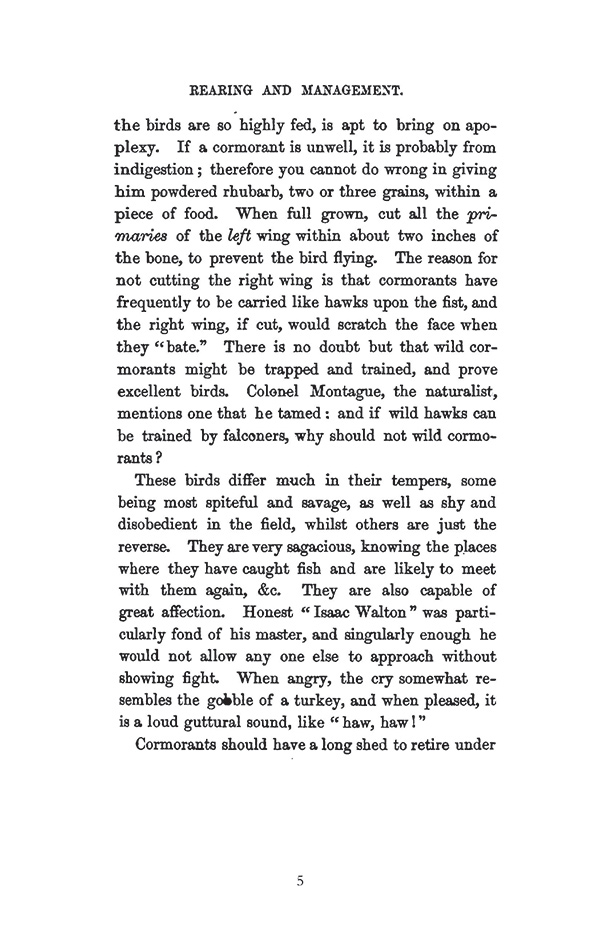 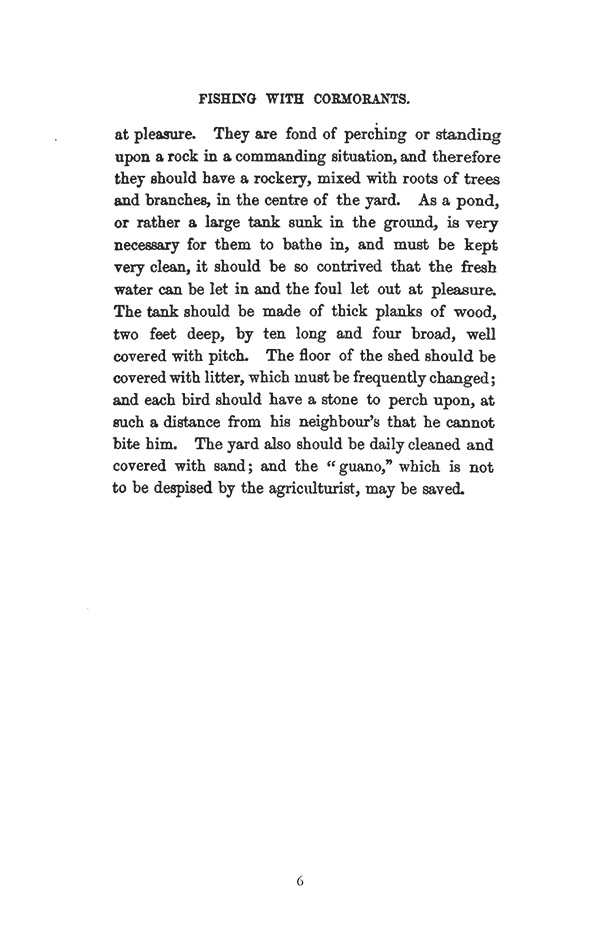 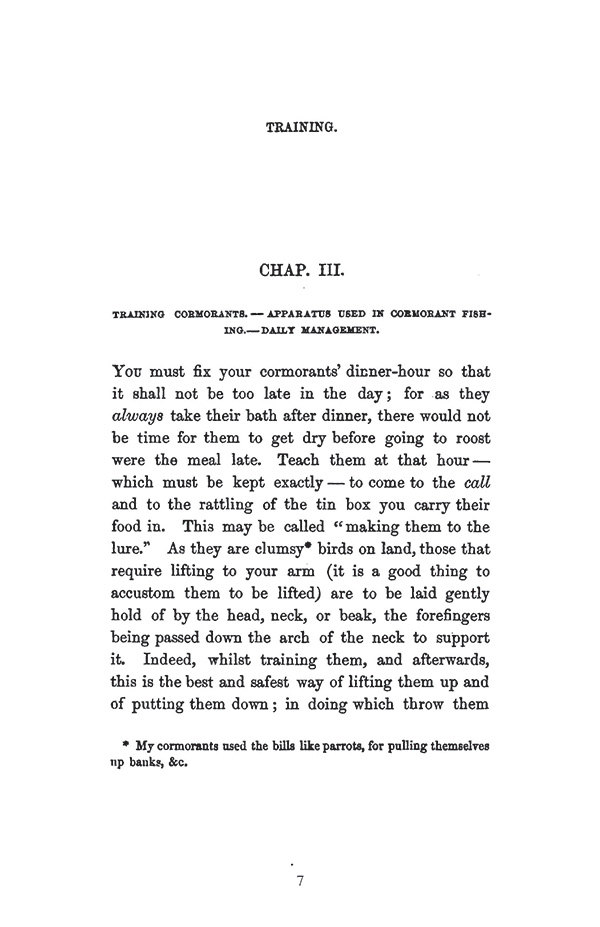 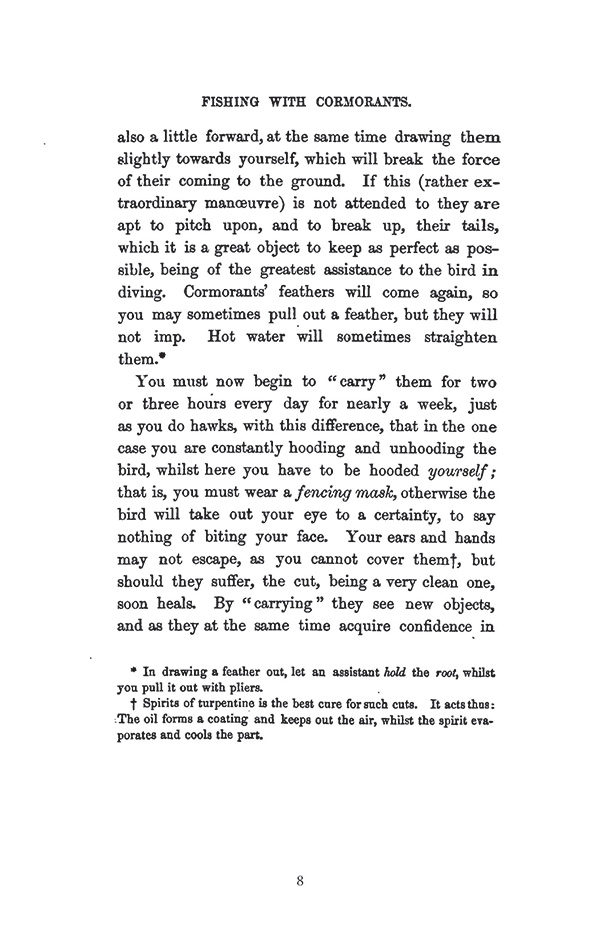 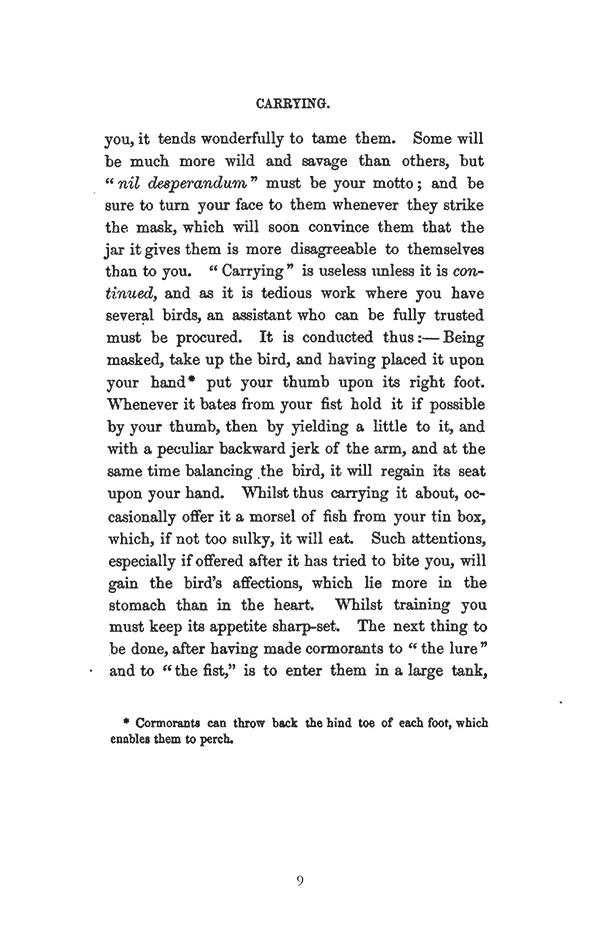 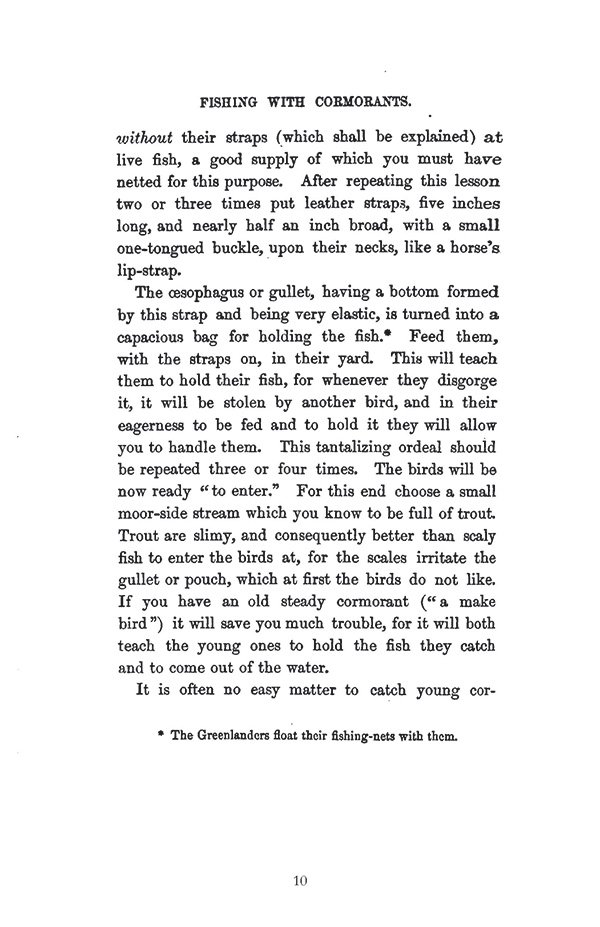 This vintage book contains a complete guide to “cormorant fishing”, a traditional fishing style whereby trained cormorants are used to fish in rivers. It is believed to have originated in Japan, China or Korea. Cormorants refer to roughly 40 species of medium-to-large aquatic birds, with body weight in the range of 0.35–5 kilograms and wing span of 45–100 centimetres. They nest in colonies around the shore, on trees, islets or cliffs.

This vintage book contains a complete guide to “cormorant fishing”, a traditional fishing style whereby trained cormorants are used to fish in rivers. It is believed to have originated in Japan, China or Korea. Cormorants refer to roughly 40 species of medium-to-large aquatic birds, with body weight in the range of 0.35–5 kilograms and wing span of 45–100 centimetres. They nest in colonies around the shore, on trees, islets or cliffs. This volume is not to be missed by those with an interest in this ancient pastime, and it would make for a worthy addition to collections of fishing literature. Contents include: “Its Connexion with China”, “Master of the Royal Cormorants in England”, “The Dutch Appear to have Preserved a Knowledge of this Mode of Fishing”, “Isaac Walton”, “Where to Obtain Young Ones”, “Rearing Them”, “The Shed, Yard, Tank, or Pond”, “Daily Management”, etc. Francis Henry Salvin (1817–1904) was an English writer on cormorant-fishing and falconry. Other notable works by this author include: “Falconry in the British Isles” (1855) and “Falconry: its Claims, History, and Practice” (1859). Many vintage books such as this are increasingly scarce and expensive. It is with this in mind that we are republishing this volume now in an affordable, modern, high-quality edition complete with the original text and artwork.

Francis Henry Salvin was a writer on falconry and cormorant-fishing, born at Croxdale Hall on 4 April 1817. He was fifth and youngest son of William Thomas Salvin, of Croxdale Hall, Durham, by his wife Anna Maria, daughter of John Webbe-Weston, of Sutton Place, Surrey. Educated at Ampleforth, a Roman catholic school in Yorkshire, he served for several years in the militia, joining the 3rd battalion of the York and Lancaster regiment in 1839 and retiring with the rank of captain in 1864. In 1857 he inherited from his uncle, Thomas Monnington Webbe-Weston, the fine old Tudor mansion Sutton Place, near Guildford, but he usually lived at Whitmoor House, another residence on the estate. An early love of hawking was stimulated by an acquaintance with John Tong, assistant falconer to Col. Thomas Thornton (1757–1823).

In 1843 Salvin made a highly successful hawking tour with John Pells (employed by the hereditary grand falconer of England) through the north of England; and when quartered with his regiment at remote places in Ireland he used to fly falcons at rooks and magpies. Near Fermoy in 1857 he killed in four months eighty-four of these birds. He also for some years kept goshawks and made successful flights with them at mountain hares, rabbits and water-hens. He invented a portable bow-perch for these birds. He was a prominent member from 1870 of the old Hawking Club which met on the Wiltshire downs.

Salvin was also the first to revive successfully in England the old sport of fishing with cormorants. In 1849 he took with four birds in twenty-eight days some 1200 large fish at Driffield, Kilney, and other places in the north of England. His famous cormorant, 'Izaak Walton,' brought from Rotterdam, was stuffed in 1847 by John Hancock and is now in the Newcastle-on-Tyne Museum. Another, 'Sub-Inspector,' the first known instance of a cormorant bred in confinement (Field, 27 May 1882), was exhibited at the Fisheries Exhibition, South Kensington, in 1883, and was sent to the Zoological Gardens after Salvin's death, surviving till 1911. This bird and its master are depicted in a drawing by F. W. Frohawk (reproduced in the Field, 18 Oct. 1890) now in the possession of Mr. Charles Sibeth.

Salvin had great power over animals. He tamed two young otters to follow him like dogs and sleep in his lap, and at one time kept a wild boar with collar and bell. He was active in field sports when past seventy.

He died unmarried on 2 Oct. 1904, at the Manor House, Sutton Park, Guildford, and was buried in St. Edward's cemetery, Sutton Park.

Salvin, who was a frequent contributor to the Field, collaborated in two works on falconry. The first, Falconry in the British Isles (1855; 2nd edit. 1873), written in conjunction with William Brodrick of Chudleigh, has been pronounced the best modern English work on the subject. The figures of hawks, drawn by Brodrick, are said to bear comparison with the work of Josef Wolf, the animal painter. The text of the second edition is to be preferred, but the illustrations are inferior to those of the original (Quarterly Review, July 1875).

Salvin also assisted Gage Earle Freeman in Falconry: Its Claims, History, and Practice (1859); the Remarks on training the Otter and Cormorant appended to it being wholly his. A portrait of Salvin by Mr. Hinks of Farnham is in the possession of Mr. Charles Sibeth of Lexham Gardens, Kensington. He is also represented in J. C. Hook's Fishing by Proxy, exhibited at the Royal Academy in 1873.

The Book of the Fly-Rod