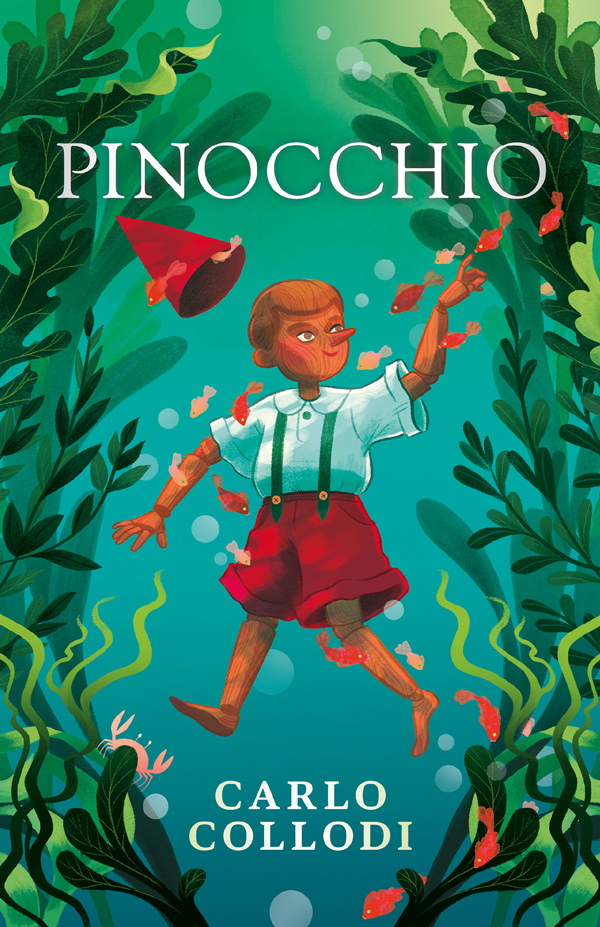 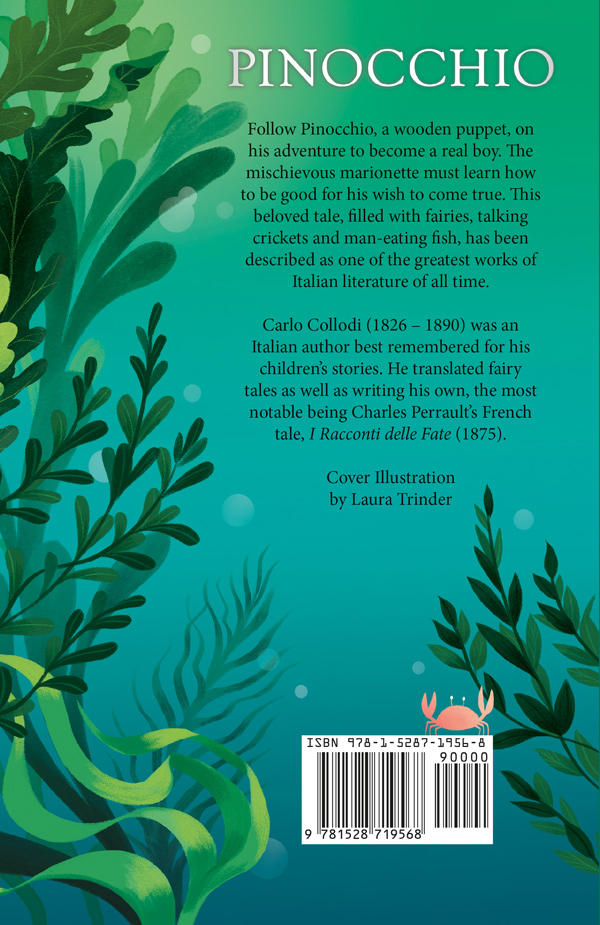 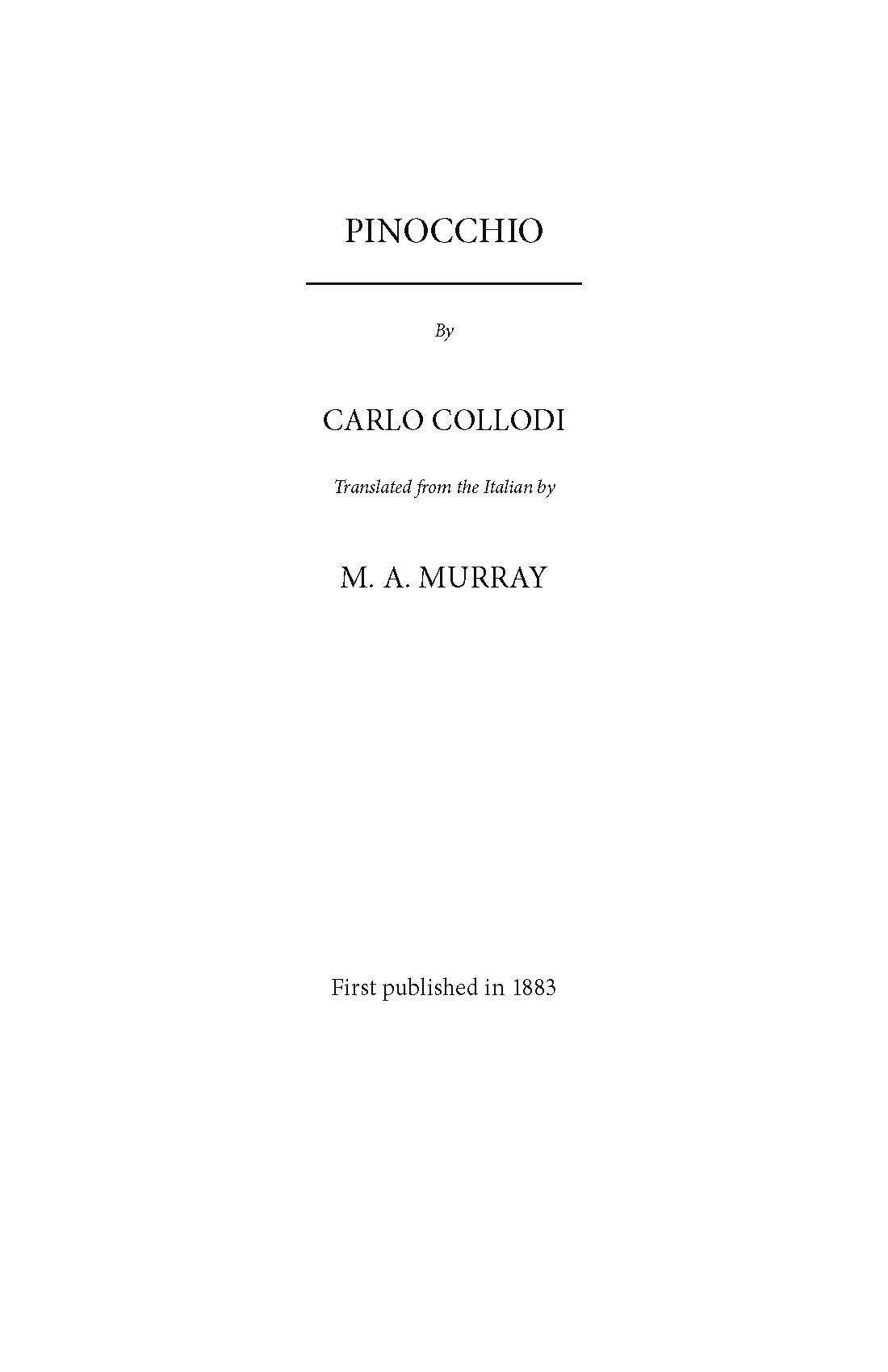 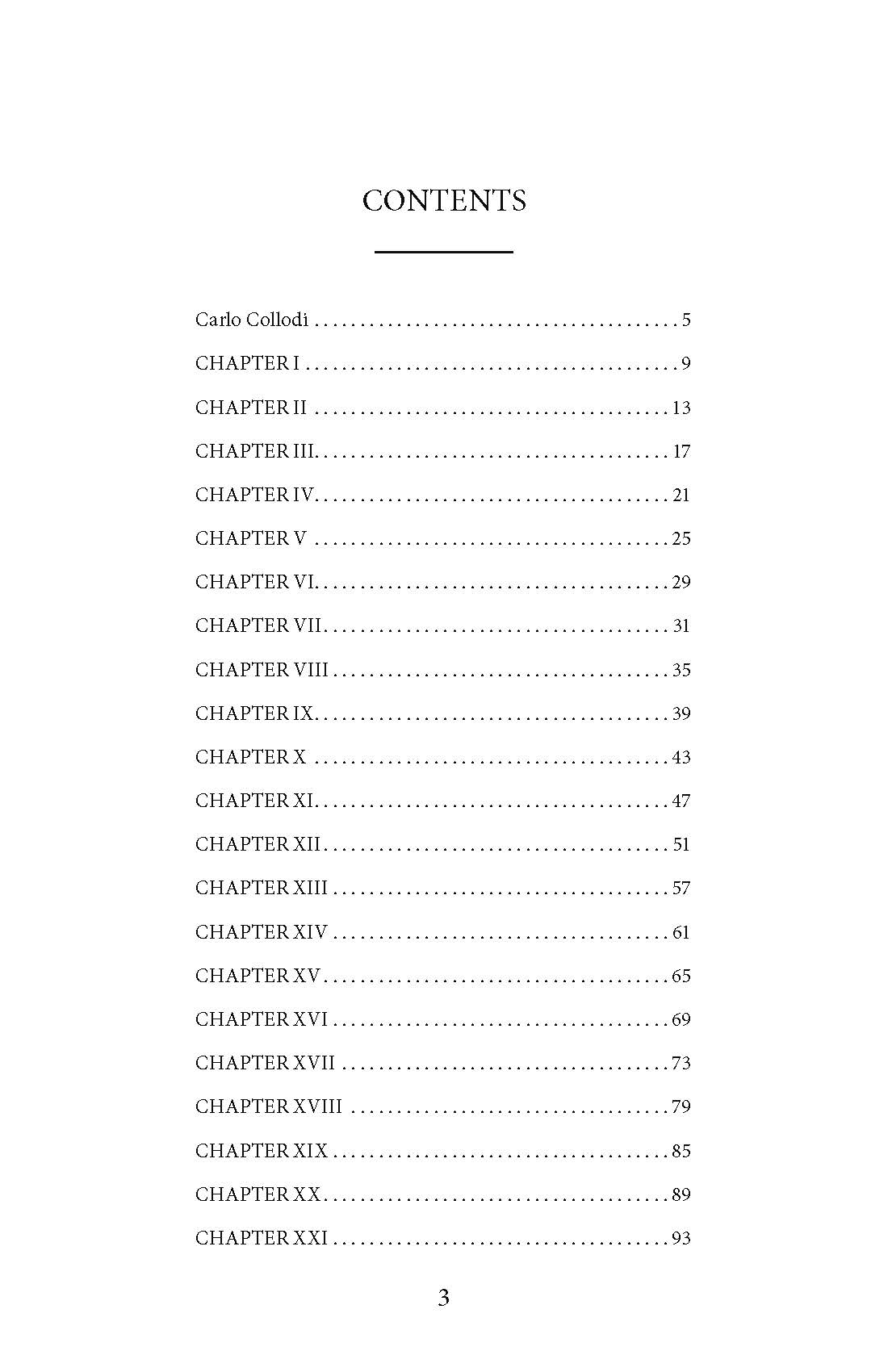 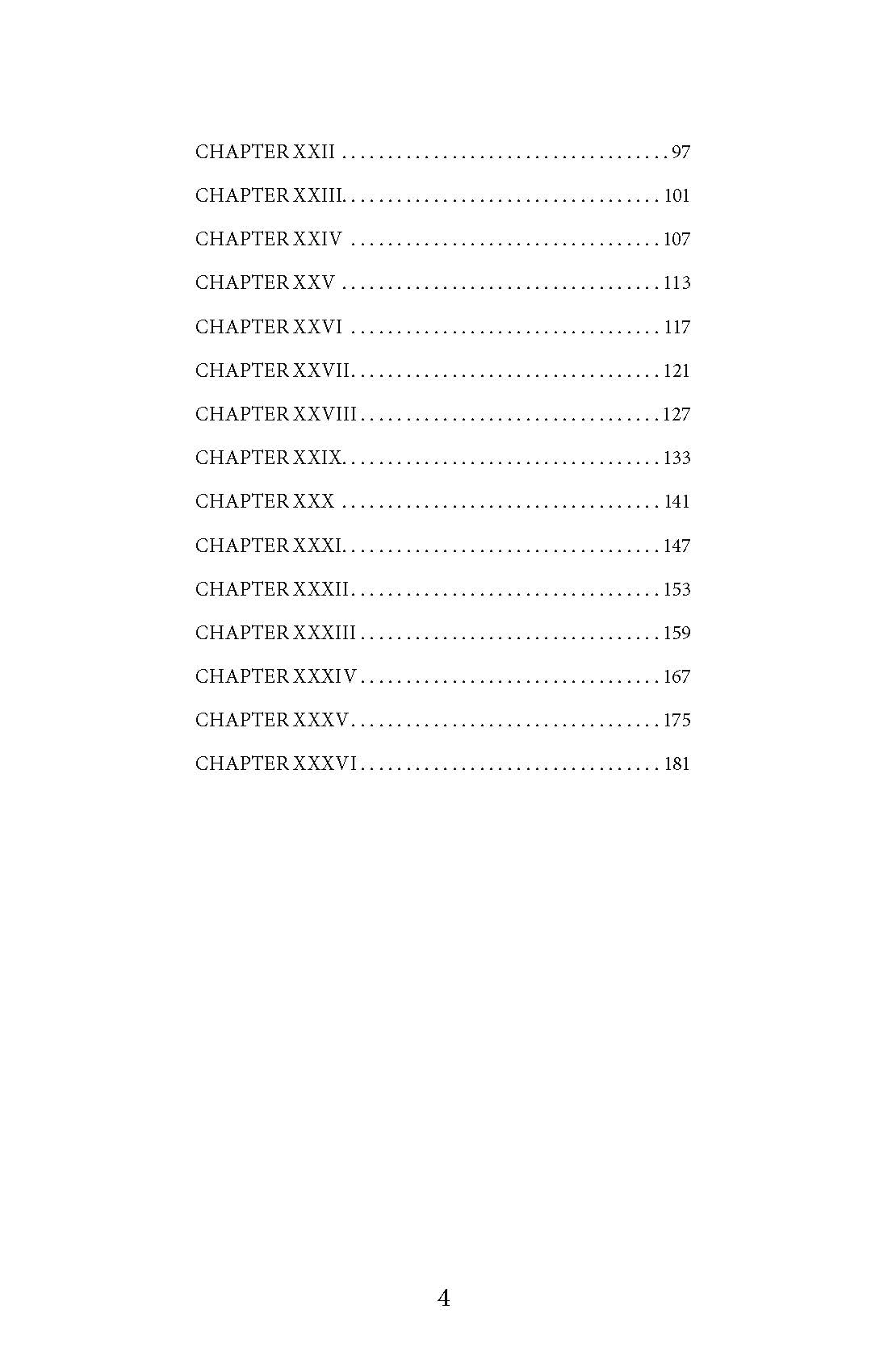 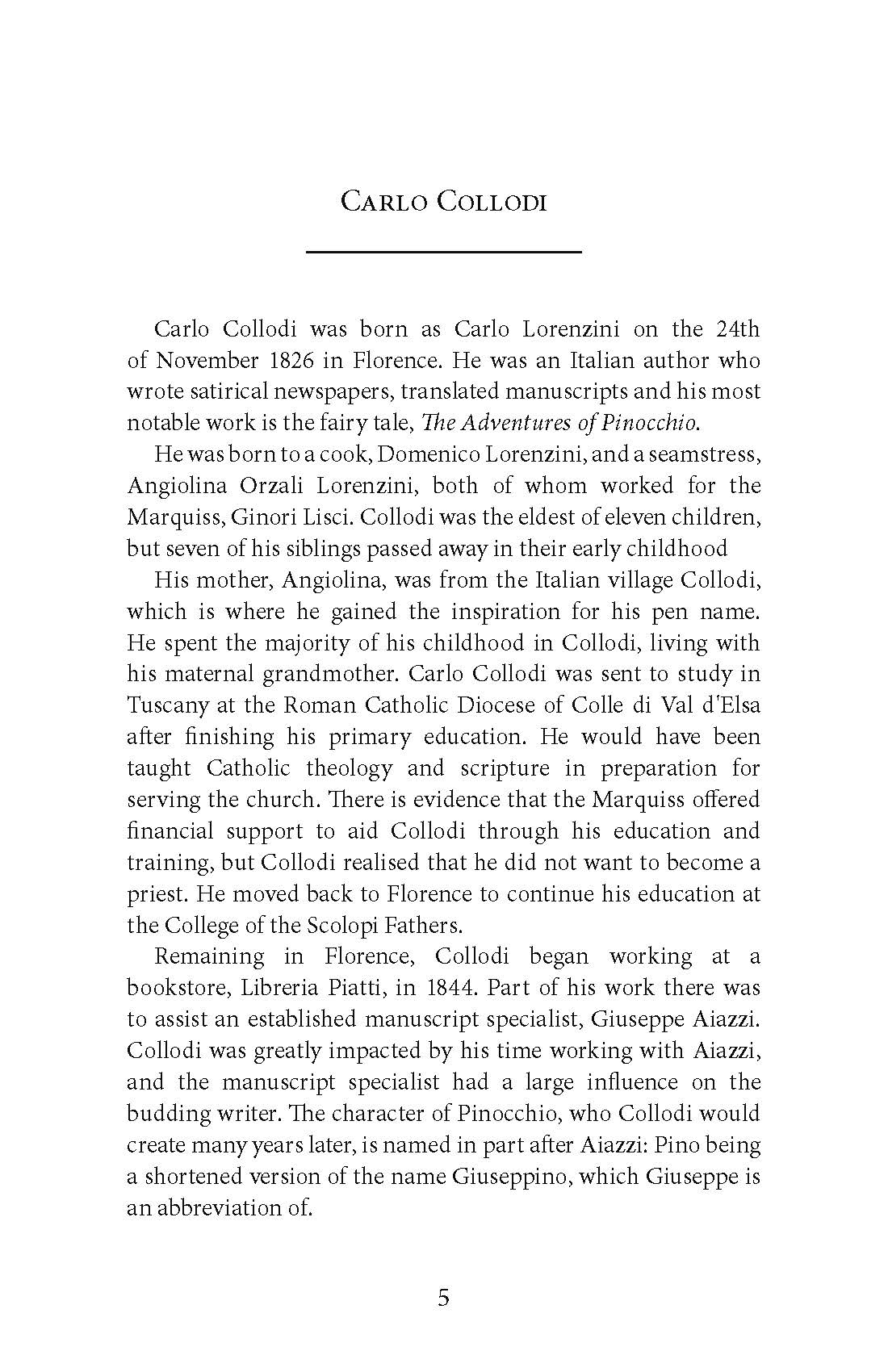 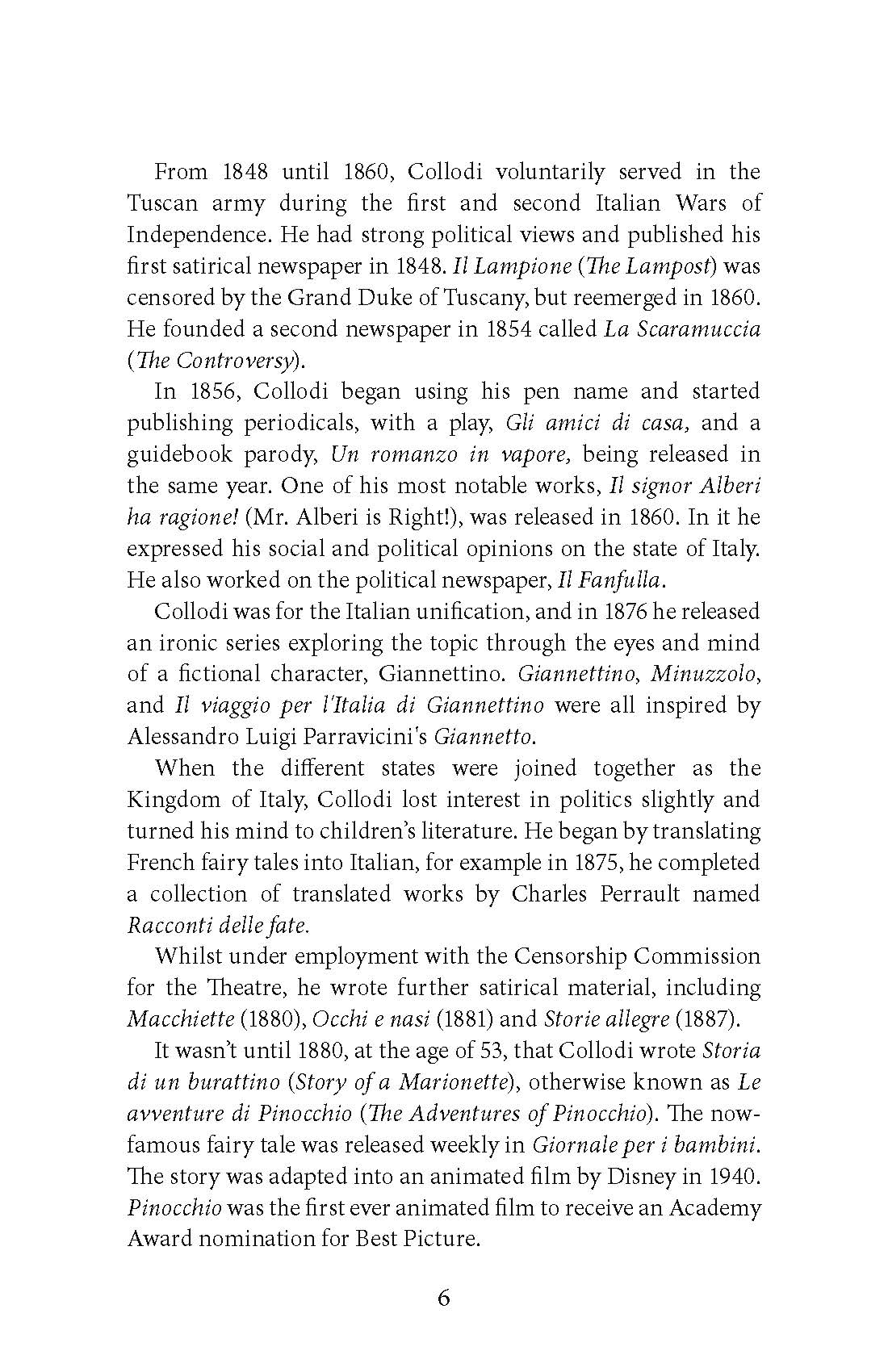 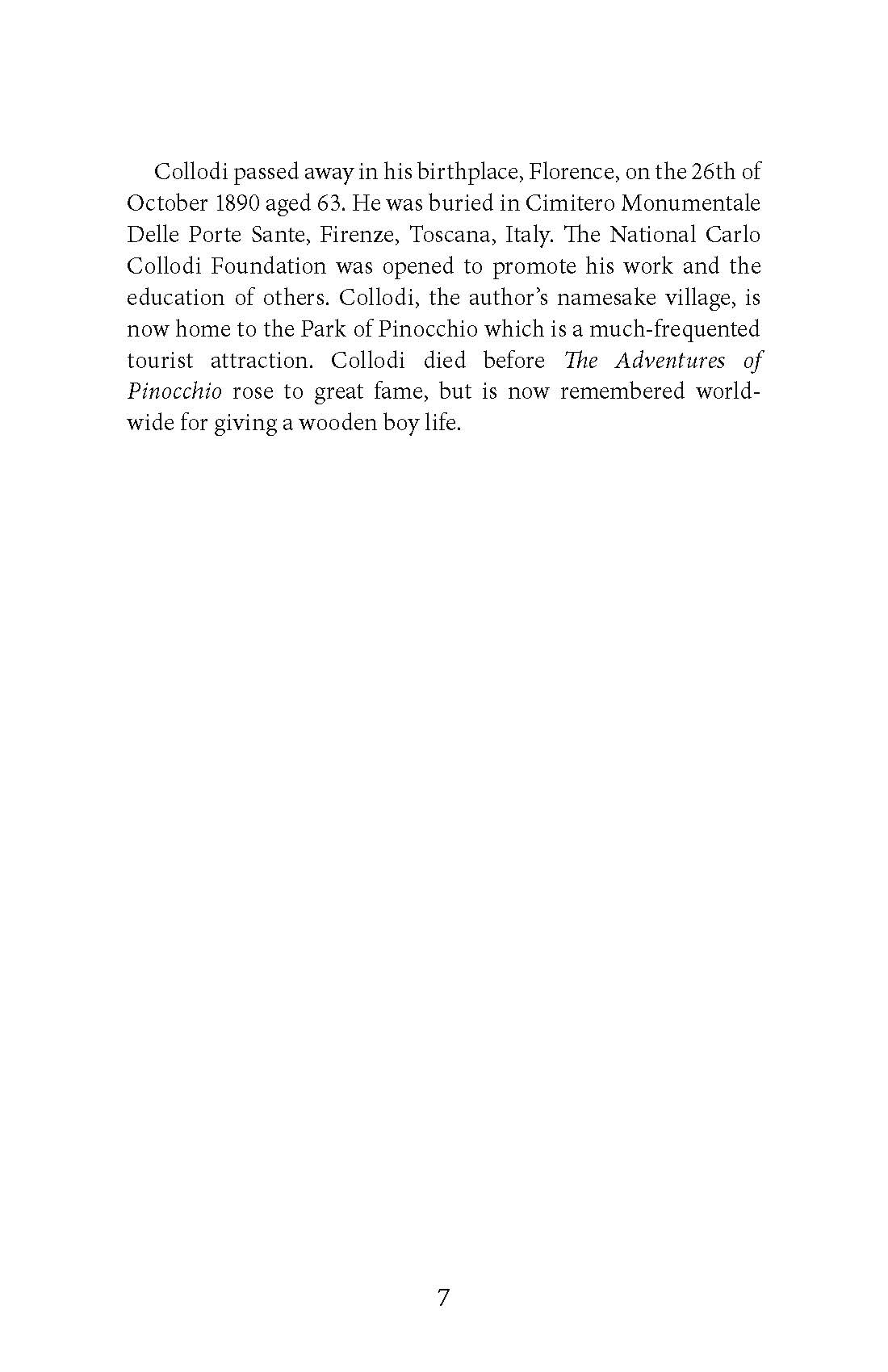 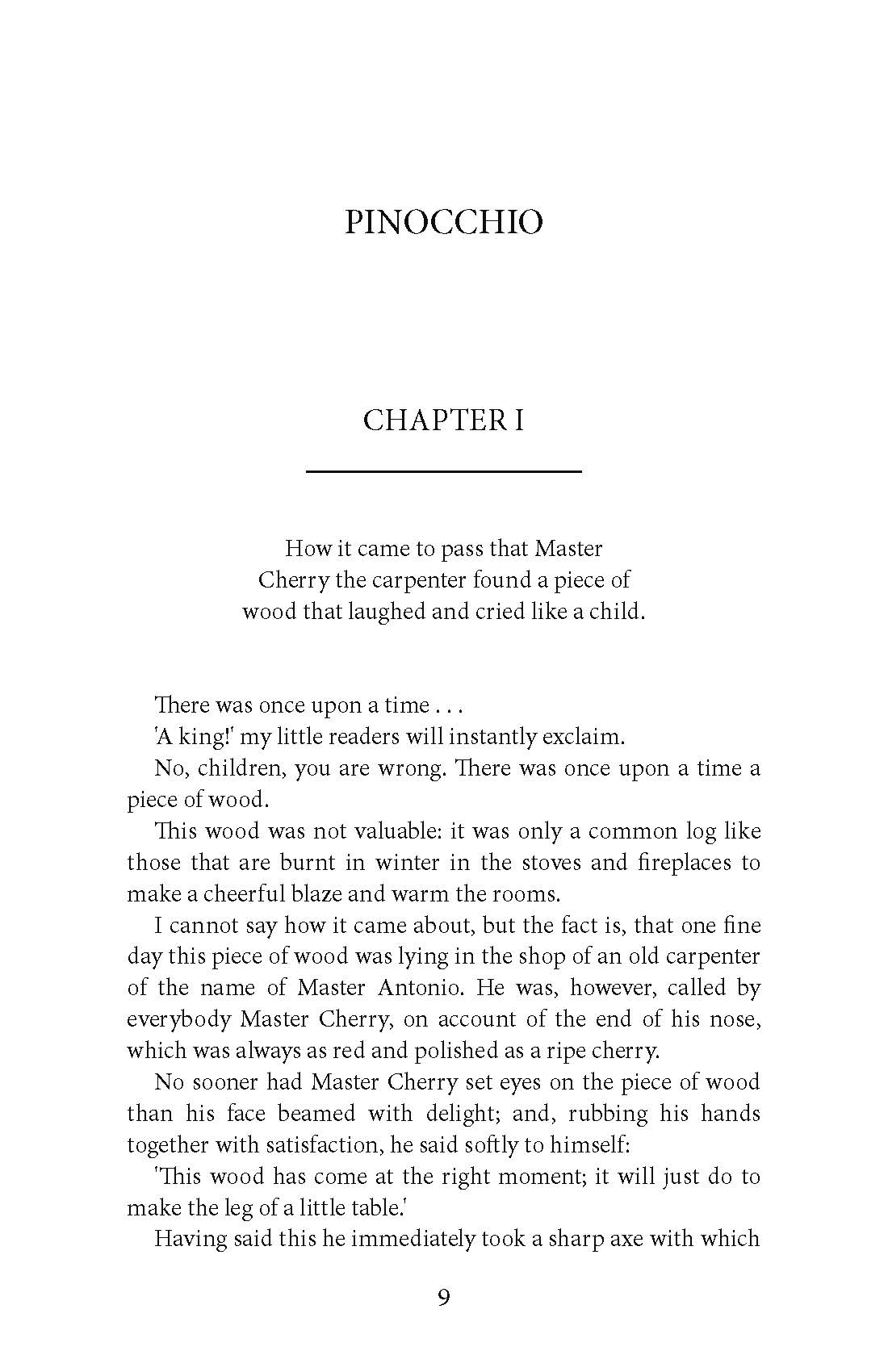 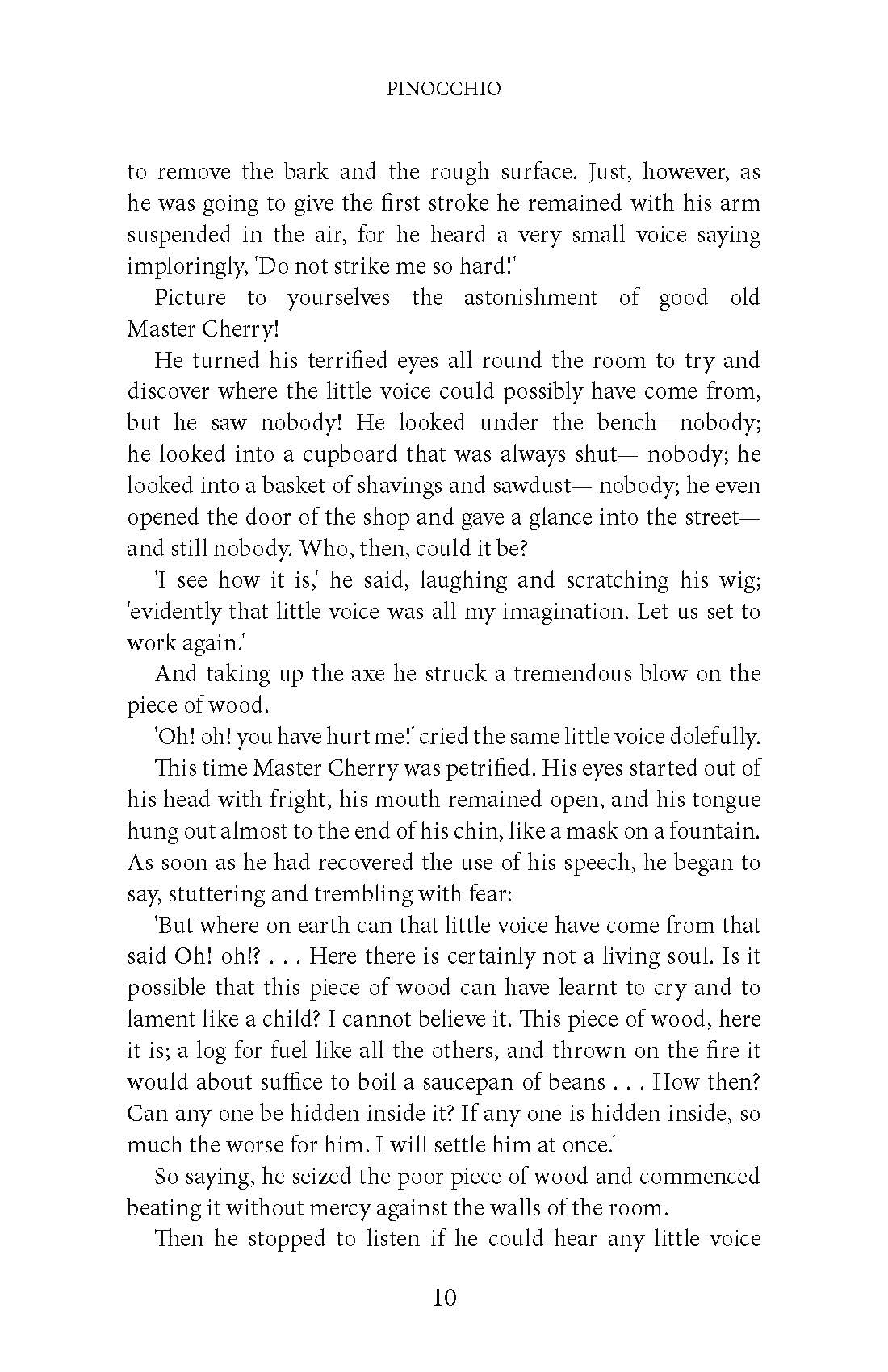 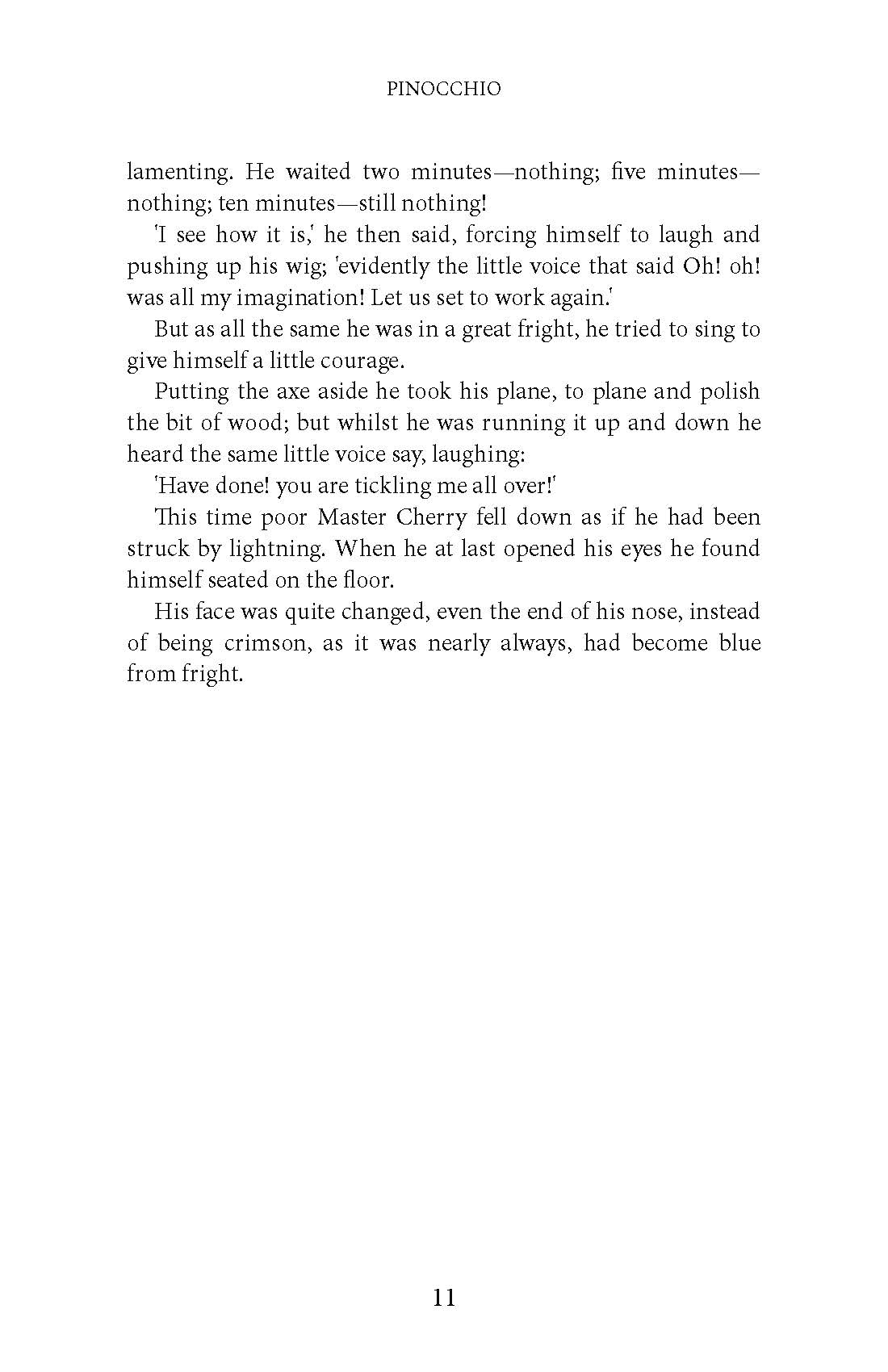 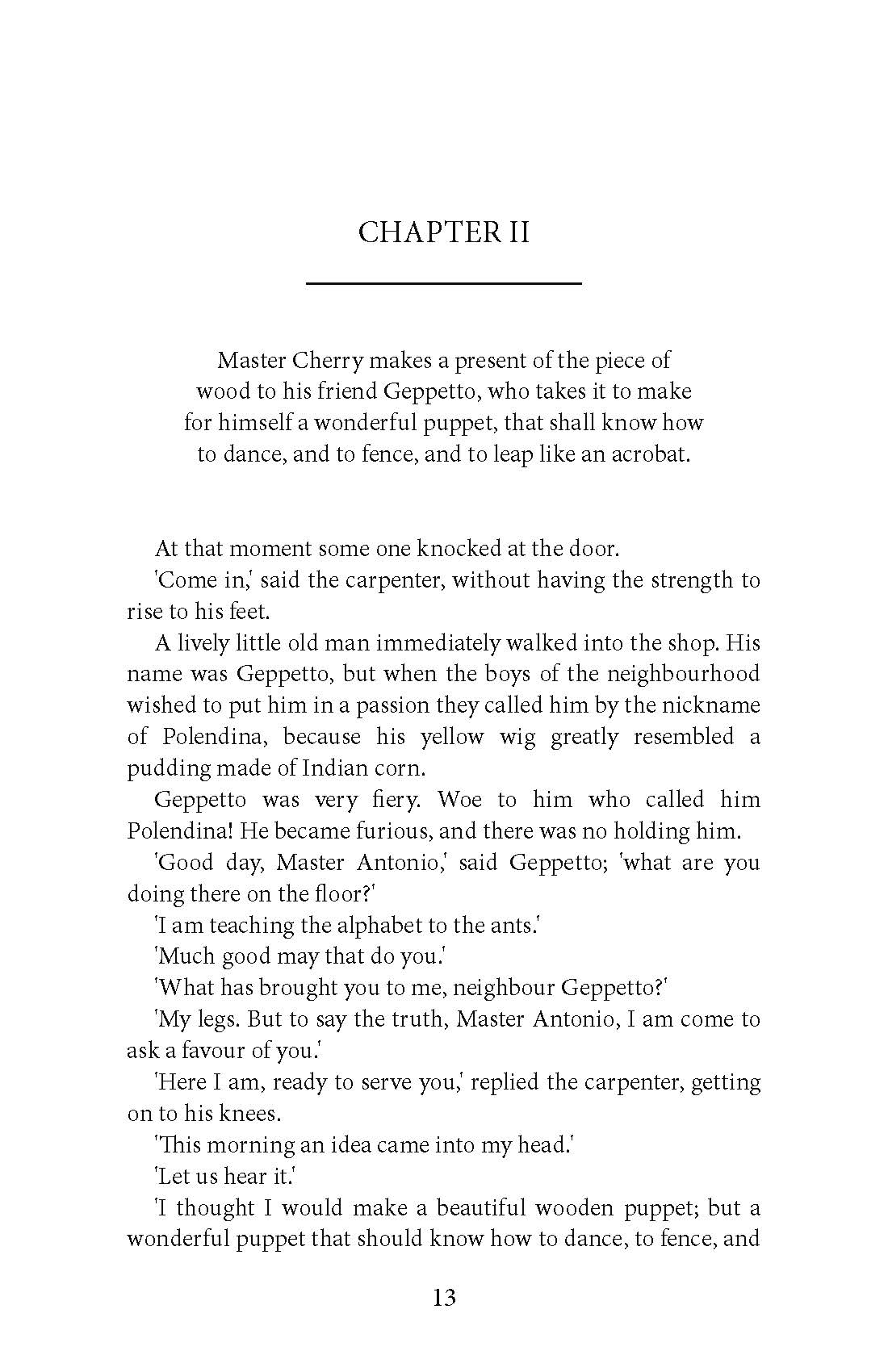 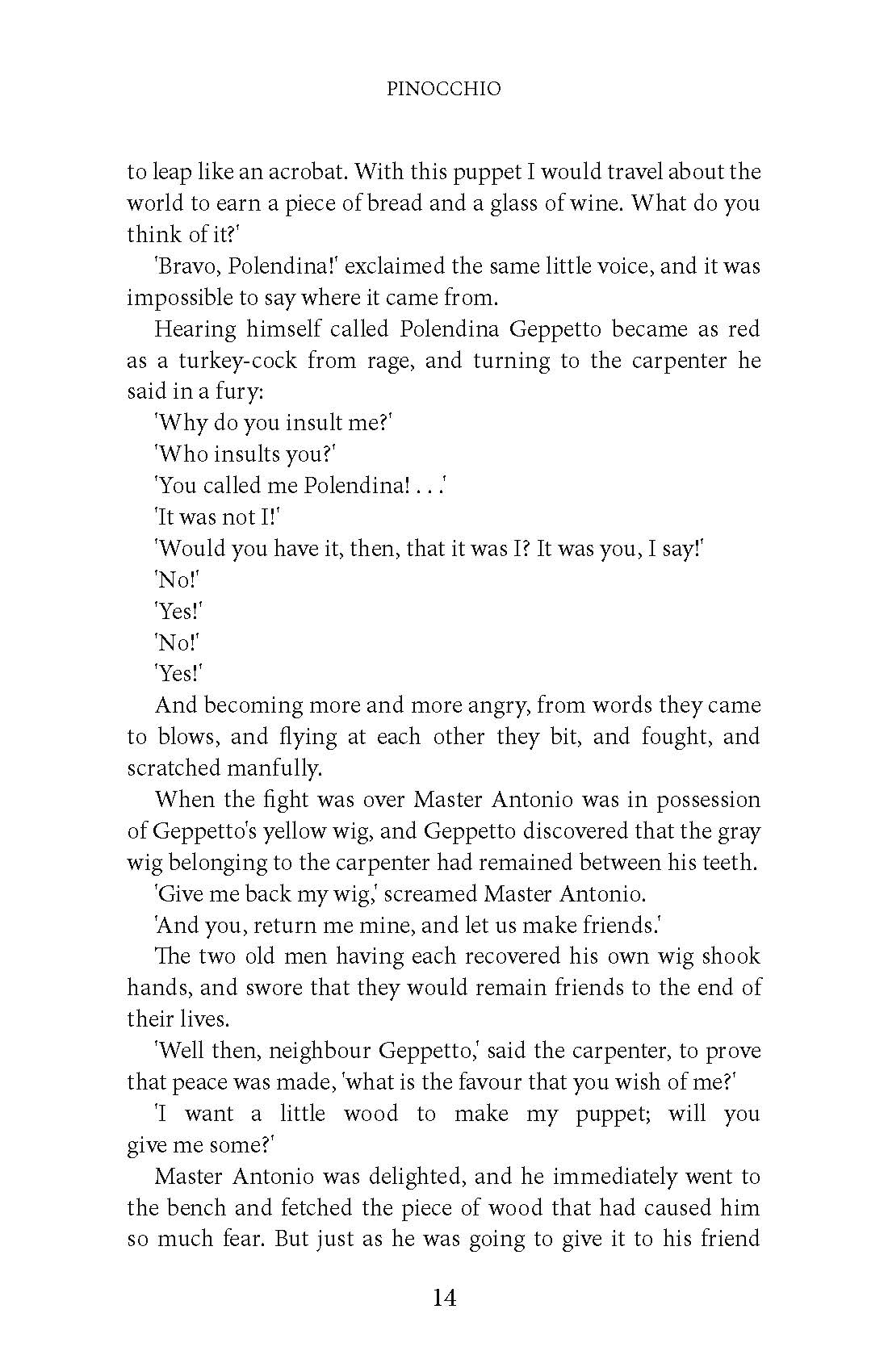 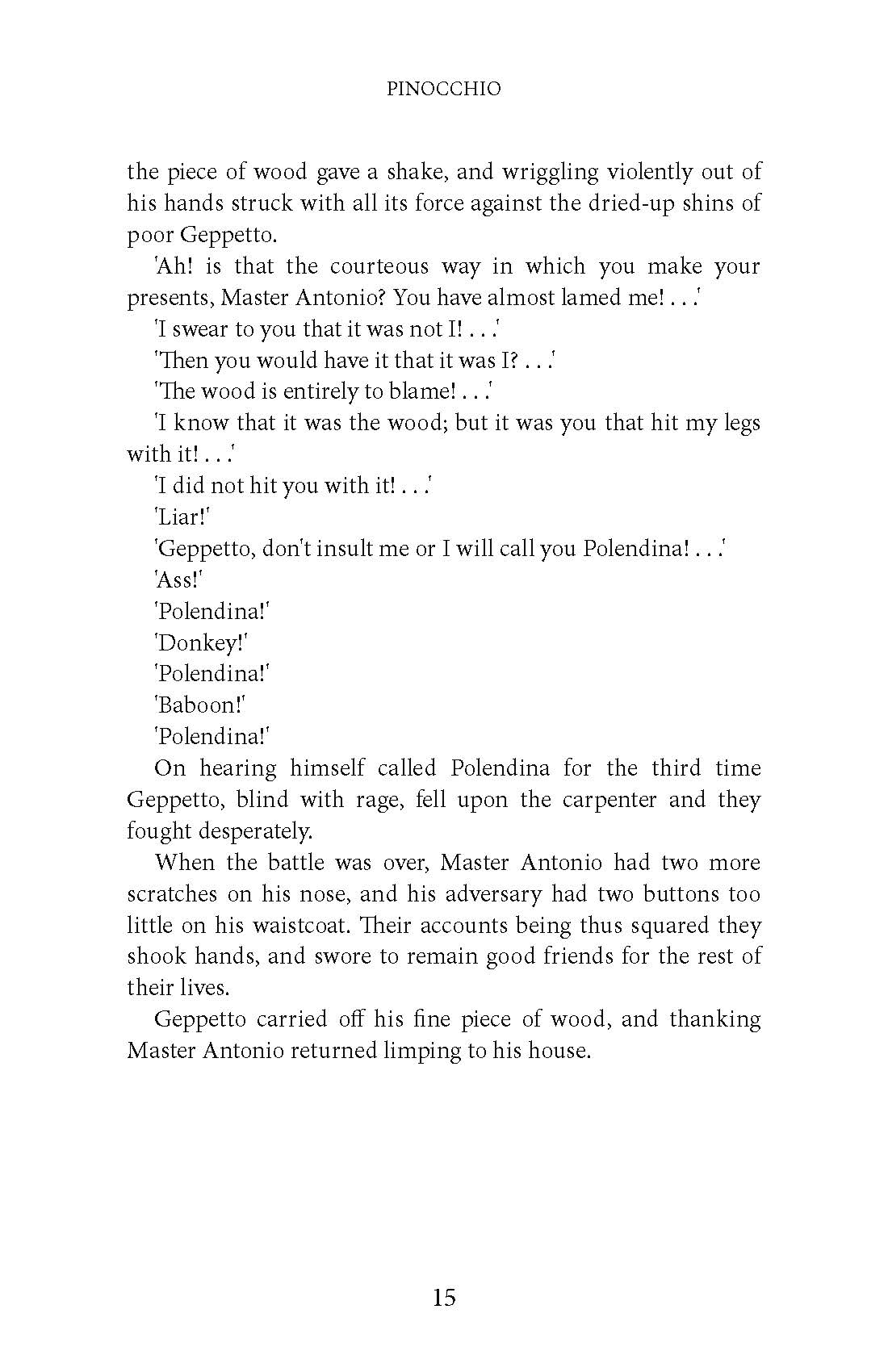 Follow Pinocchio, a wooden puppet, on his adventure to become a real boy. The mischievous marionette must learn how to be good for his wish to come true. This beloved tale, filled with fairies, talking crickets and man-eating fish, has been described as one of the greatest works of Italian literature of all time.

Follow Pinocchio, a wooden puppet, on his adventure to become a real boy. The mischievous marionette must learn how to be good for his wish to come true. This beloved tale, filled with fairies, talking crickets and man-eating fish, has been described as one of the greatest works of Italian literature of all time. “Pinocchio”, originally published in 1883, is the perfect bookshelf addition for collectors of fairy tales and lovers of children’s stories. Carlo Collodi (1826 – 1890) was an Italian author best remembered for his children’s stories. He translated fairy tales as well as writing his own, the most notable being Charles Perrault’s French tale, ‘I Racconti delle Fate’ (1875). Read & Co. Children’s is proudly republishing this classic tale in a new, high-quality edition with a specially commissioned biography of the author as part of our “Treasures Collection”.

Carlo Collodi was born as Carlo Lorenzini on the 24th of November 1826 in Florence. He was an Italian author who wrote satirical newspapers, translated manuscripts and his most notable work is the fairy tale, The Adventures of Pinocchio.

He was born to a cook, Domenico Lorenzini, and a seamstress, Angiolina Orzali Lorenzini, both of whom worked for the Marquiss, Ginori Lisci. Collodi was the eldest of eleven children, but seven of his siblings passed away in their early childhood

His mother, Angiolina, was from the Italian village Collodi, which is where he gained the inspiration for his pen name. He spent the majority of his childhood in Collodi, living with his maternal grandmother. Carlo Collodi was sent to study in Tuscany at the Roman Catholic Diocese of Colle di Val d'Elsa after finishing his primary education. He would have been taught Catholic theology and scripture in preparation for serving the church. There is evidence that the Marquiss offered financial support to aid Collodi through his education and training, but Collodi realised that he did not want to become a priest. He moved back to Florence to continue his education at the College of the Scolopi Fathers.

Remaining in Florence, Collodi began working at a bookstore, Libreria Piatti, in 1844. Part of his work there was to assist an established manuscript specialist, Giuseppe Aiazzi. Collodi was greatly impacted by his time working with Aiazzi, and the manuscript specialist had a large influence on the budding writer. The character of Pinocchio, who Collodi would create many years later, is named in part after Aiazzi: Pino being a shortened version of the name Giuseppino, which Giuseppe is an abbreviation of.

From 1848 until 1860, Collodi voluntarily served in the Tuscan army during the first and second Italian Wars of Independence. He had strong political views and published his first satirical newspaper in 1848. Il Lampione (The Lampost) was censored by the Grand Duke of Tuscany, but reemerged in 1860. He founded a second newspaper in 1854 called La Scaramuccia (The Controversy).

In 1856, Collodi began using his pen name and started publishing periodicals, with a play, Gli amici di casa, and a guidebook parody, Un romanzo in vapore, being released in the same year. One of his most notable works, Il signor Alberi ha ragione! (Mr. Alberi is Right!), was released in 1860. In it he expressed his social and political opinions on the state of Italy. He also worked on the political newspaper, Il Fanfulla.

Collodi was for the Italian unification, and in 1876 he released an ironic series exploring the topic through the eyes and mind of a fictional character, Giannettino. Giannettino, Minuzzolo, and Il viaggio per l'Italia di Giannettino were all inspired by Alessandro Luigi Parravicini's Giannetto.

When the different states were joined together as the Kingdom of Italy, Collodi lost interest in politics slightly and turned his mind to children’s literature. He began by translating French fairy tales into Italian, for example in 1875, he completed a collection of translated works by Charles Perrault named Racconti delle fate.

It wasn’t until 1880, at the age of 53, that Collodi wrote Storia di un burattino (Story of a Marionette), otherwise known as Le avventure di Pinocchio (The Adventures of Pinocchio). The now-famous fairy tale was released weekly in Giornale per i bambini. The story was adapted into an animated film by Disney in 1940. Pinocchio was the first ever animated film to receive an Academy Award nomination for Best Picture.

Collodi passed away in his birthplace, Florence, on the 26th of October 1890 aged 63. He was buried in Cimitero Monumentale Delle Porte Sante, Firenze, Toscana, Italy. The National Carlo Collodi Foundation was opened to promote his work and the education of others. Collodi, the author’s namesake village, is now home to the Park of Pinocchio which is a much-frequented tourist attraction. Collodi died before The Adventures of Pinocchio rose to great fame, but is now remembered world-wide for giving a wooden boy life.

Be the first to review “Pinocchio” Cancel reply