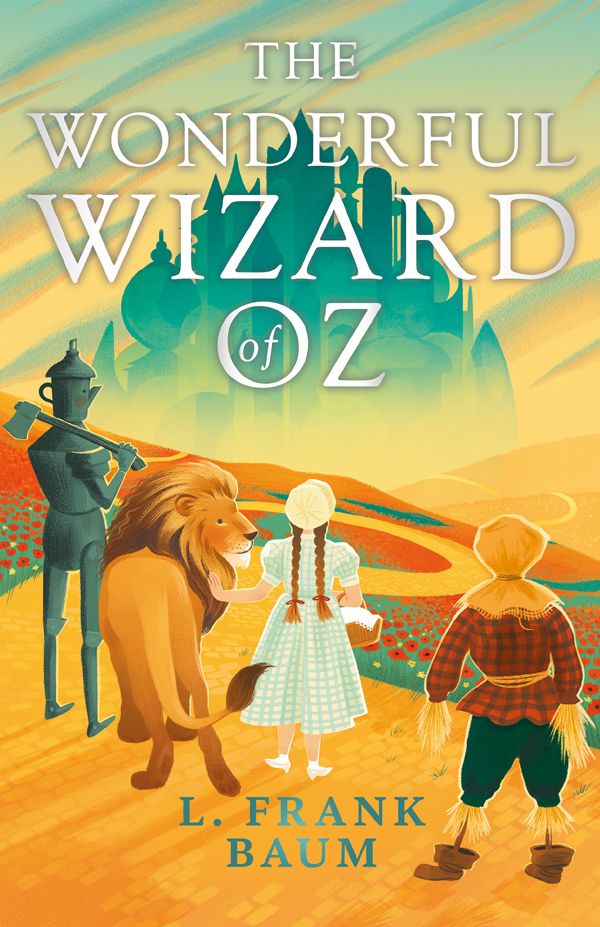 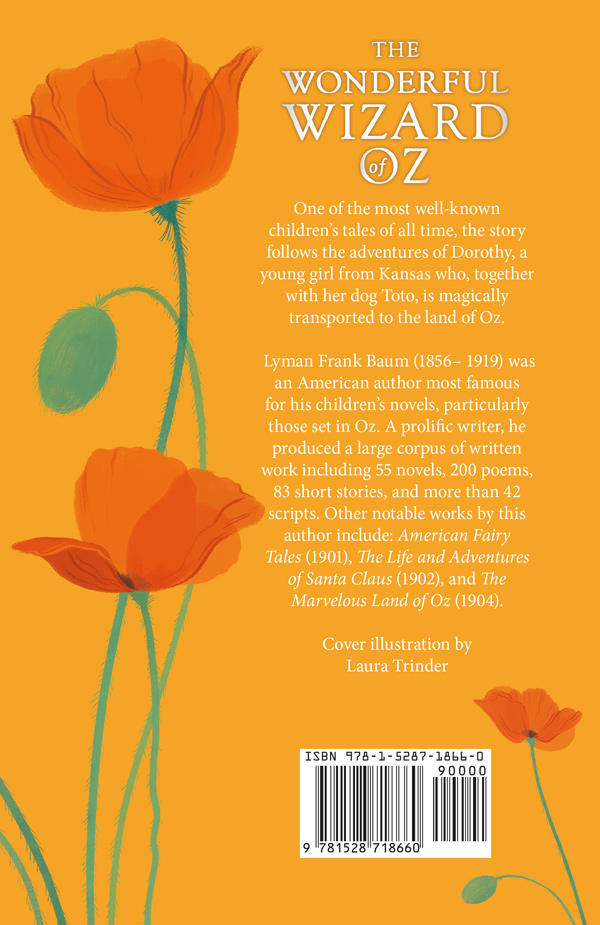 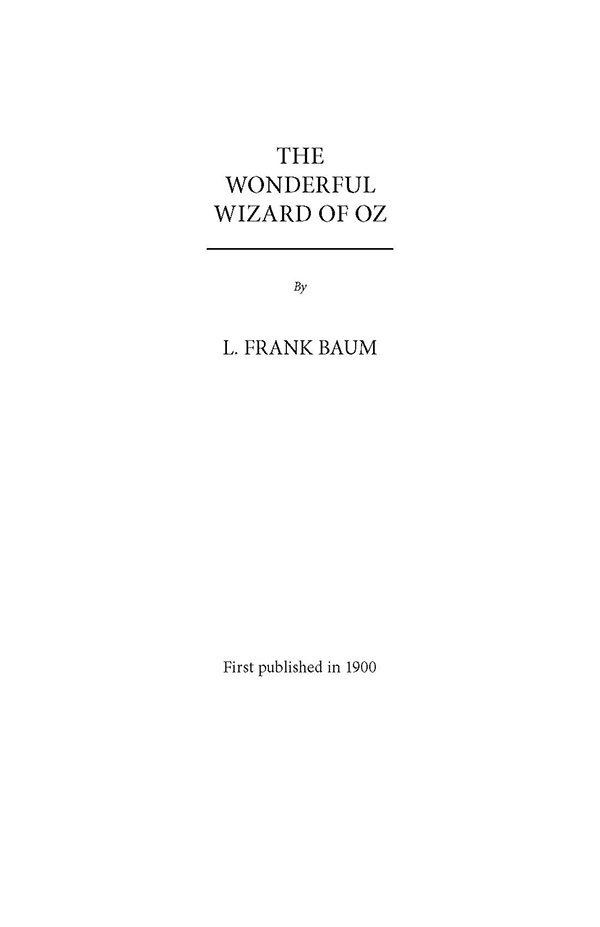 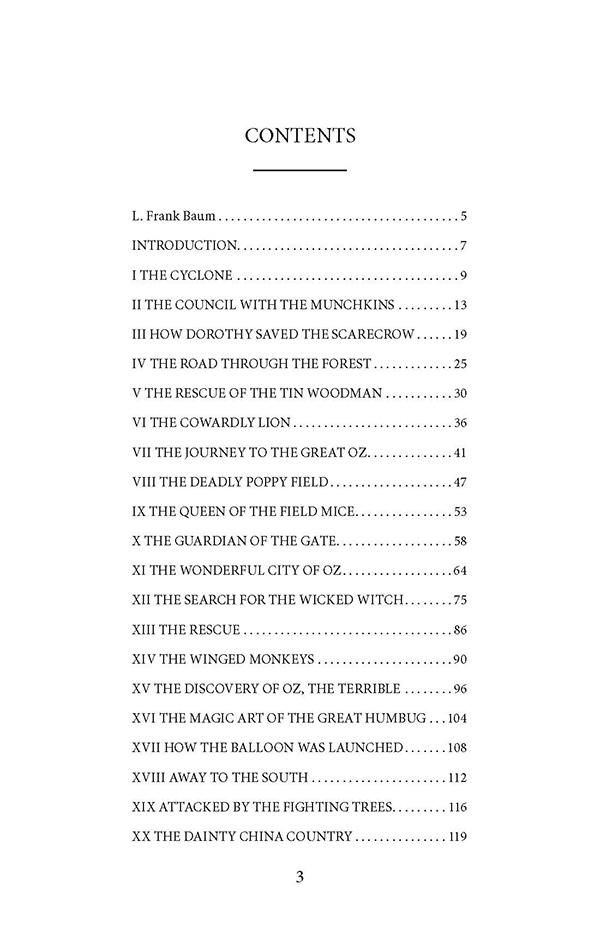 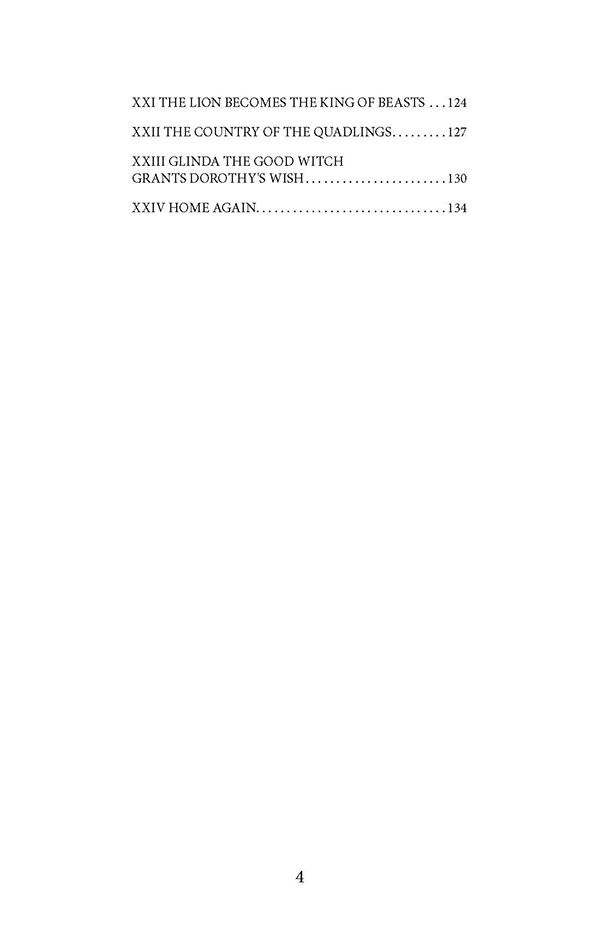 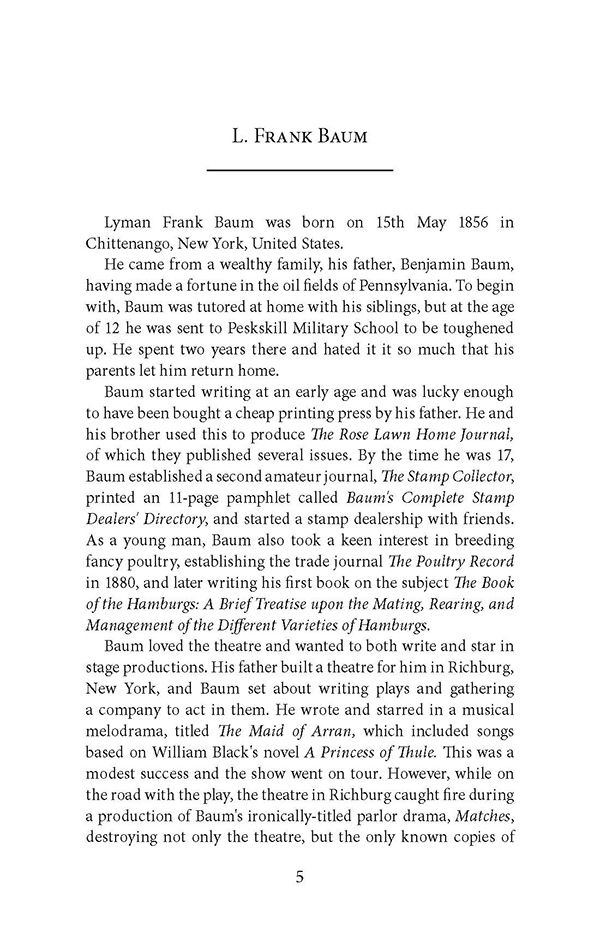 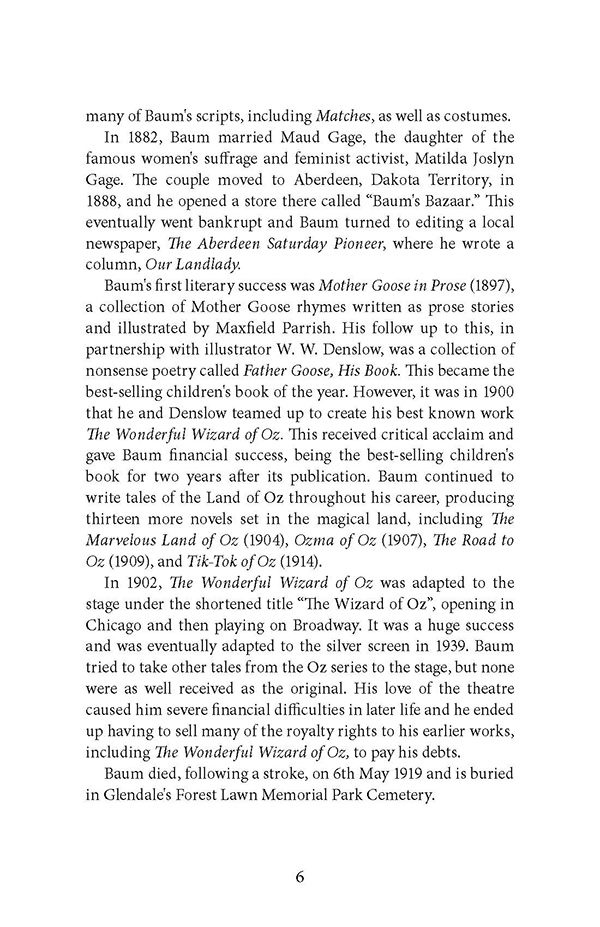 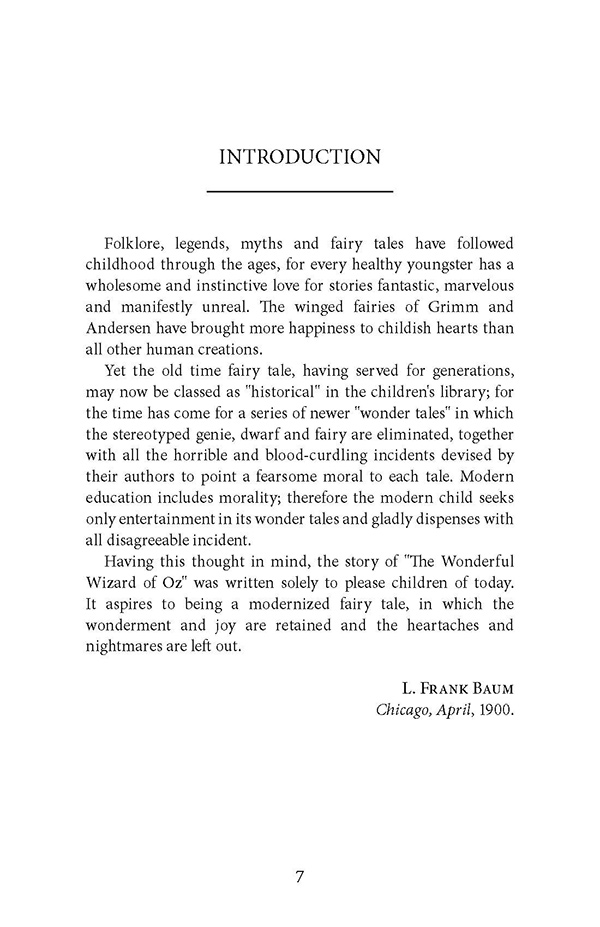 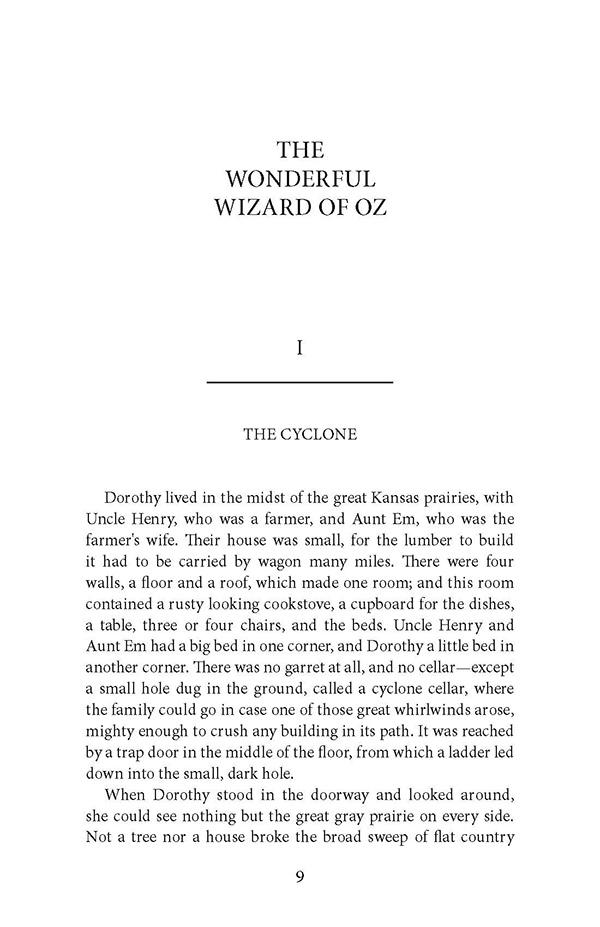 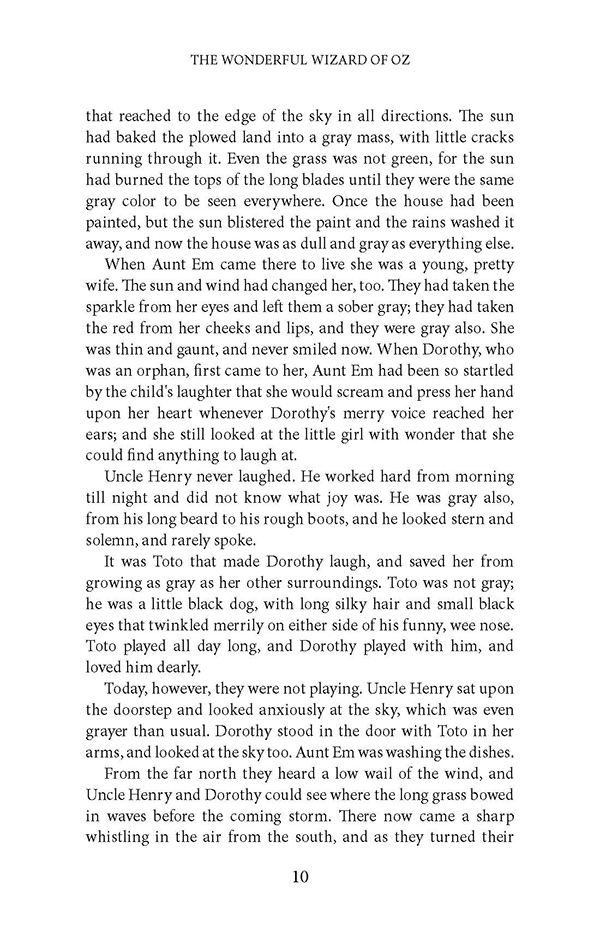 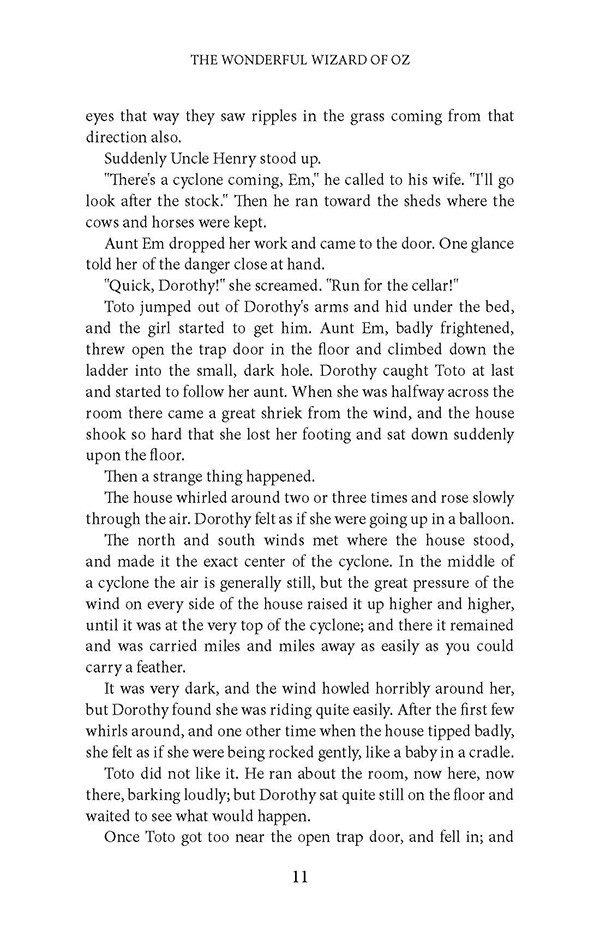 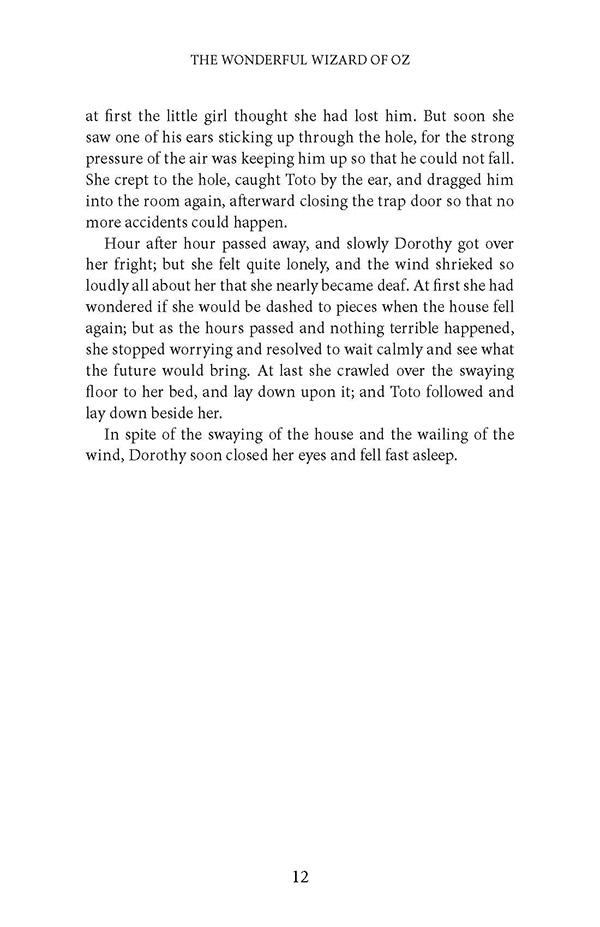 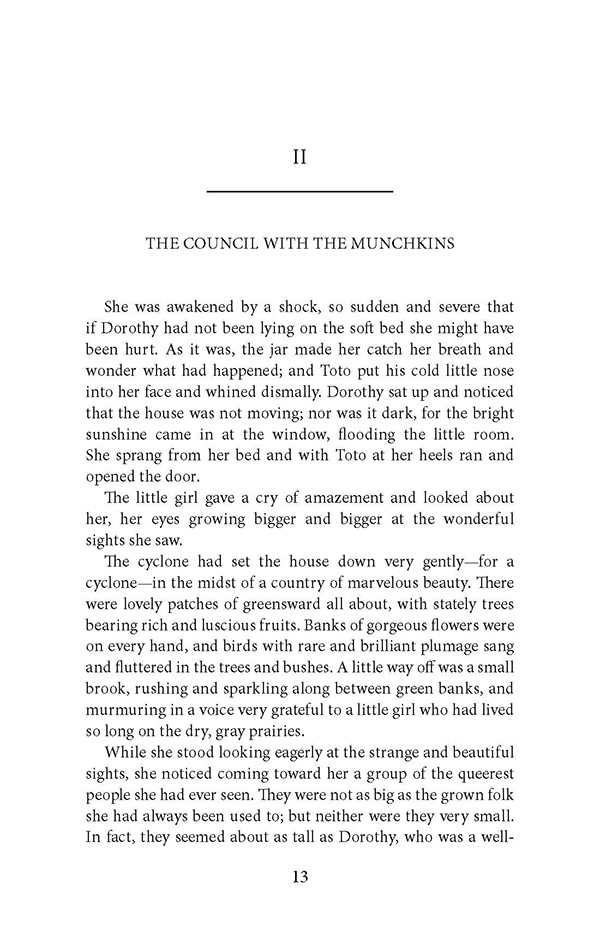 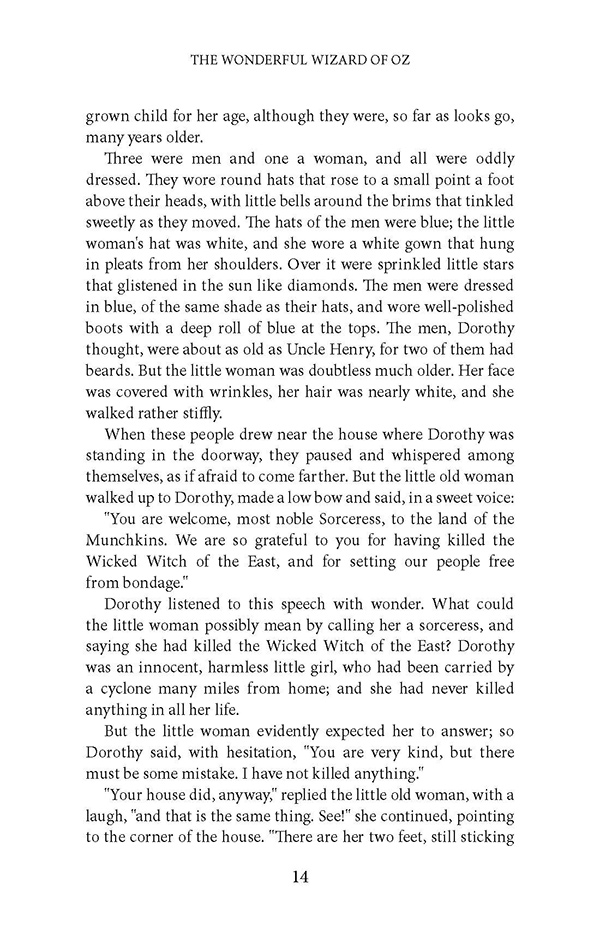 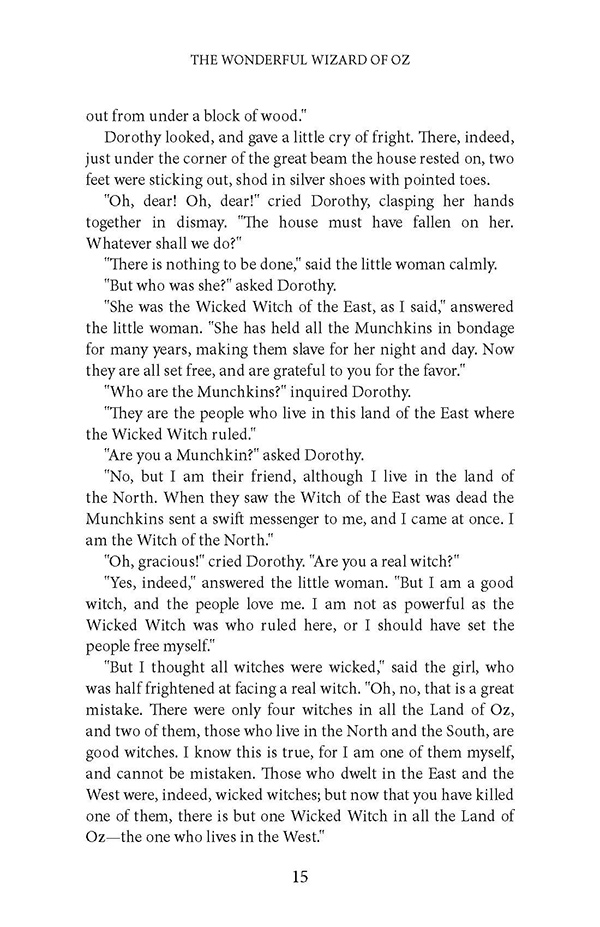 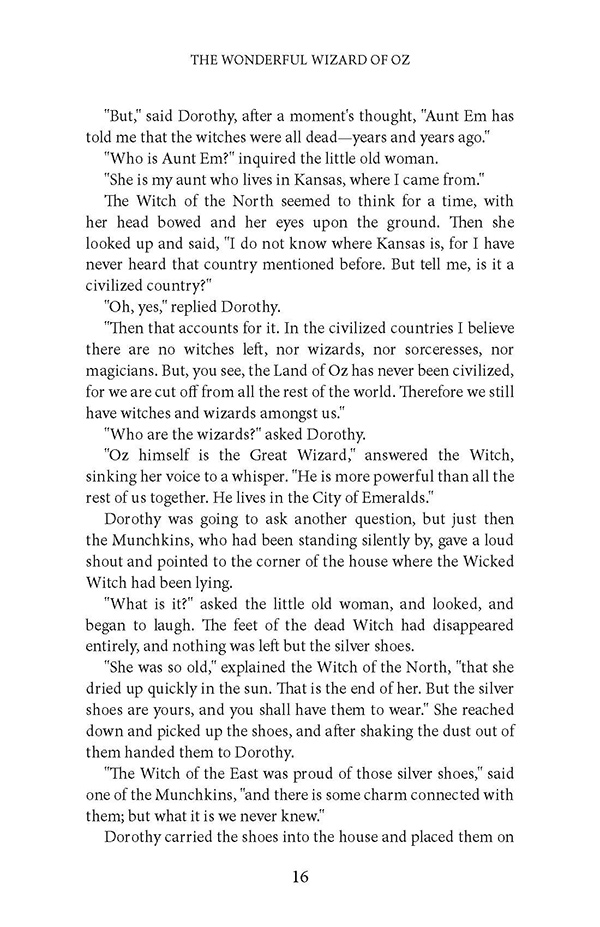 One of the most well-known children’s tales of all time, the story follows the adventures of Dorothy, a young girl from Kansas who, together with her dog Toto, is magically transported to the land of Oz.

Originally published in 1900, “The Wonderful Wizard of Oz” is a children’s novel by American author L. Frank Baum. One of the most well-known children’s tales of all time, the story follows the adventures of Dorothy, a young girl from Kansas who, together with her dog Toto, is magically transported to the land of Oz. Lyman Frank Baum (1856– 1919) was an American author most famous for his children’s novels, particularly those set in Oz. A prolific writer, he produced a large corpus of written work including 55 novels, 200 poems, 83 short stories, and more than 42 scripts. Baum was also an incredible visionary, his work predicting the invention of such things as augmented reality, television, advertising on clothing, and even laptop computers. Other notable works by this author include: “American Fairy Tales” (1901), “The Life and Adventures of Santa Claus” (1902), and “The Marvelous Land of Oz” (1904). Read & Co. Children’s is proudly republishing this classic novel now in a new edition complete with a specially-commissioned biography of the author.

He came from a wealthy family, his father, Benjamin Baum, having made a fortune in the oil fields of Pennsylvania. To begin with, Baum was tutored at home with his siblings, but at the age of 12 he was sent to Peskskill Military School to be toughened up. He spent two years there and hated it it so much that his parents let him return home.

Baum started writing at an early age and was lucky enough to have been bought a cheap printing press by his father. He and his brother used this to produce The Rose Lawn Home Journal, of which they published several issues. By the time he was 17, Baum established a second amateur journal, The Stamp Collector, printed an 11-page pamphlet called Baum's Complete Stamp Dealers' Directory, and started a stamp dealership with friends. As a young man, Baum also took a keen interest in breeding fancy poultry, establishing the trade journal The Poultry Record in 1880, and later writing his first book on the subject The Book of the Hamburgs: A Brief Treatise upon the Mating, Rearing, and Management of the Different Varieties of Hamburgs.

Baum loved the theatre and wanted to both write and star in stage productions. His father built a theatre for him in Richburg, New York, and Baum set about writing plays and gathering a company to act in them. He wrote and starred in a musical melodrama, titled The Maid of Arran, which included songs based on William Black's novel A Princess of Thule. This was a modest success and the show went on tour. However, while on the road with the play, the theatre in Richburg caught fire during a production of Baum's ironically-titled parlor drama, Matches, destroying not only the theatre, but the only known copies of many of Baum's scripts, including Matches, as well as costumes.

In 1882, Baum married Maud Gage, the daughter of the famous women's suffrage and feminist activist, Matilda Joslyn Gage. The couple moved to Aberdeen, Dakota Territory, in 1888, and he opened a store there called “Baum's Bazaar.” This eventually went bankrupt and Baum turned to editing a local newspaper, The Aberdeen Saturday Pioneer, where he wrote a column, Our Landlady.

Baum's first literary success was Mother Goose in Prose (1897), a collection of Mother Goose rhymes written as prose stories and illustrated by Maxfield Parrish. His follow up to this, in partnership with illustrator W. W. Denslow, was a collection of nonsense poetry called Father Goose, His Book. This became the best-selling children's book of the year. However, it was in 1900 that he and Denslow teamed up to create his best known work The Wonderful Wizard of Oz. This received critical acclaim and gave Baum financial success, being the best-selling children's book for two years after its publication. Baum continued to write tales of the Land of Oz throughout his career, producing thirteen more novels set in the magical land, including The Marvelous Land of Oz (1904), Ozma of Oz (1907), The Road to Oz (1909), and  Tik-Tok of Oz (1914).

In 1902, The Wonderful Wizard of Oz was adapted to the stage under the shortened title “The Wizard of Oz”, opening in Chicago and then playing on Broadway. It was a huge success and was eventually adapted to the silver screen in 1939. Baum tried to take other tales from the Oz series to the stage, but none were as well received as the original. His love of the theatre caused him severe financial difficulties in later life and he ended up having to sell many of the royalty rights to his earlier works, including The Wonderful Wizard of Oz, to pay his debts.

Baum died, following a stroke, on 6th May 1919 and is buried in Glendale's Forest Lawn Memorial Park Cemetery.

Magic for Marigold and Jane of Lantern Hill