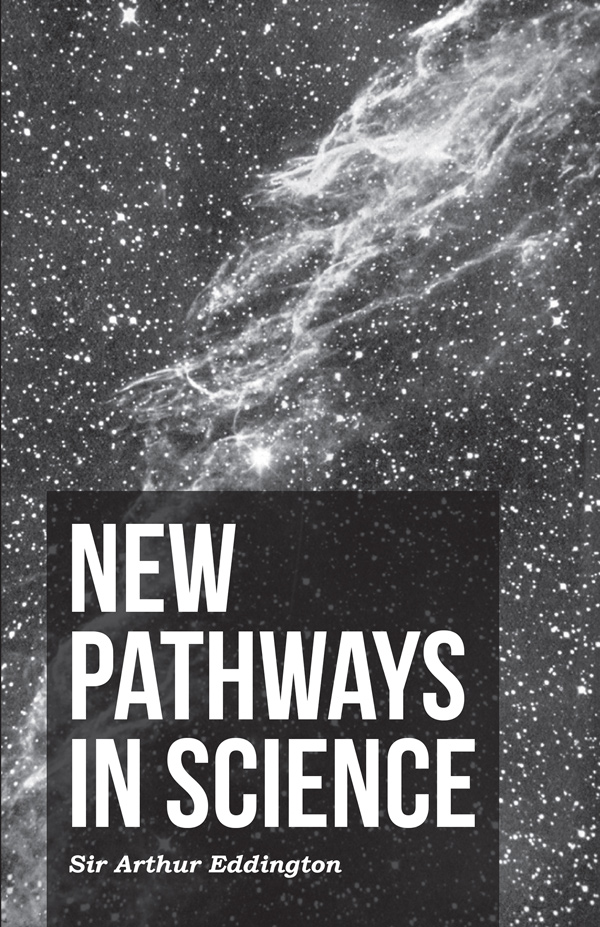 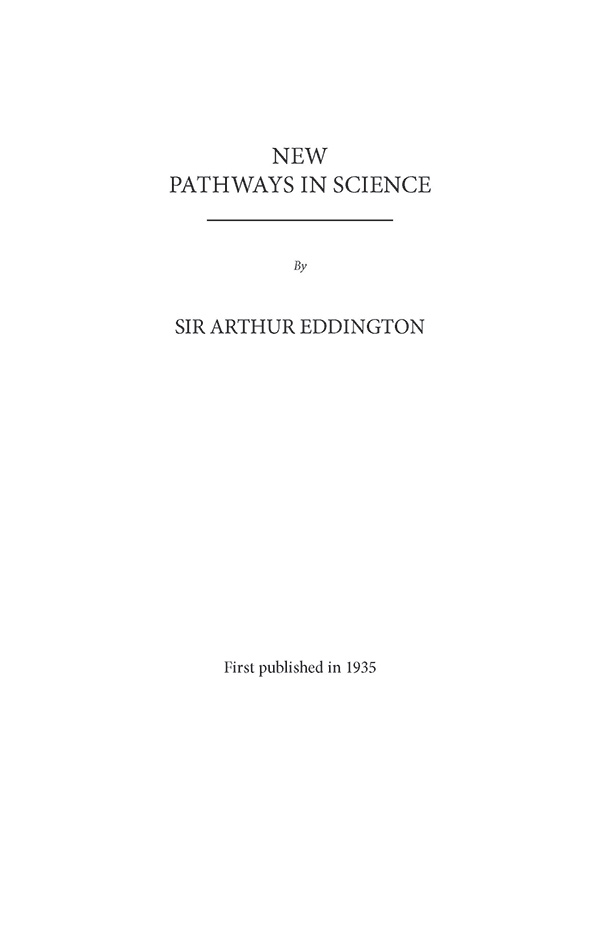 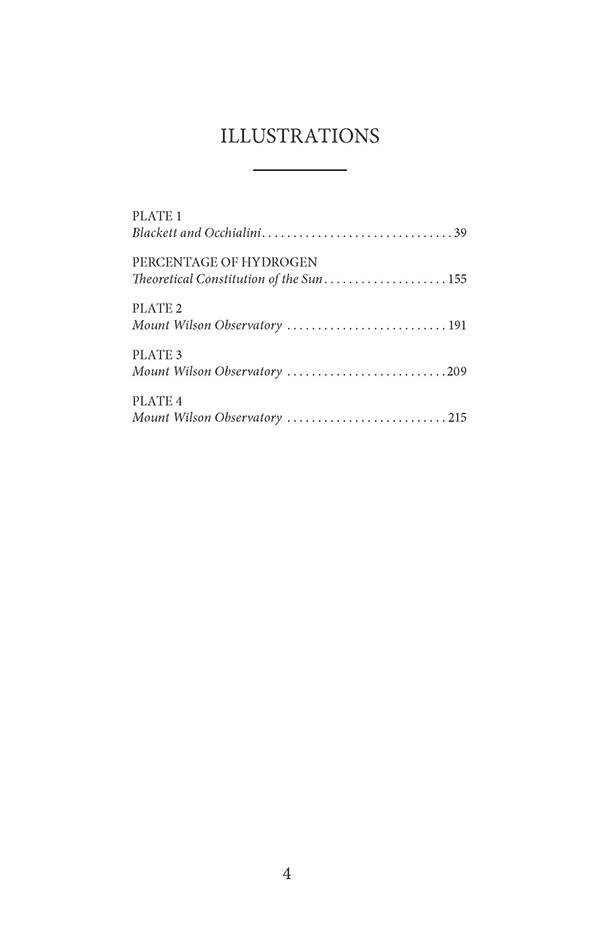 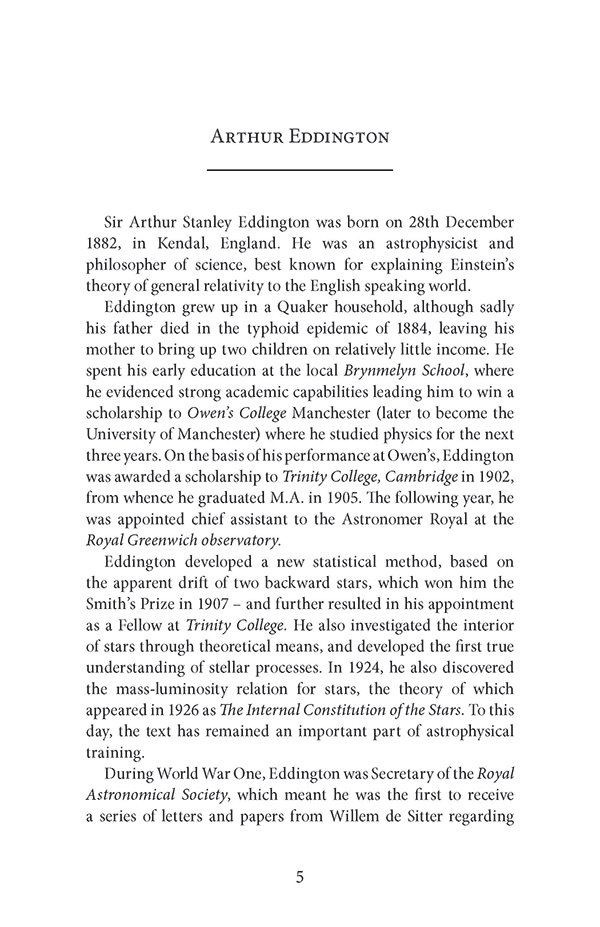 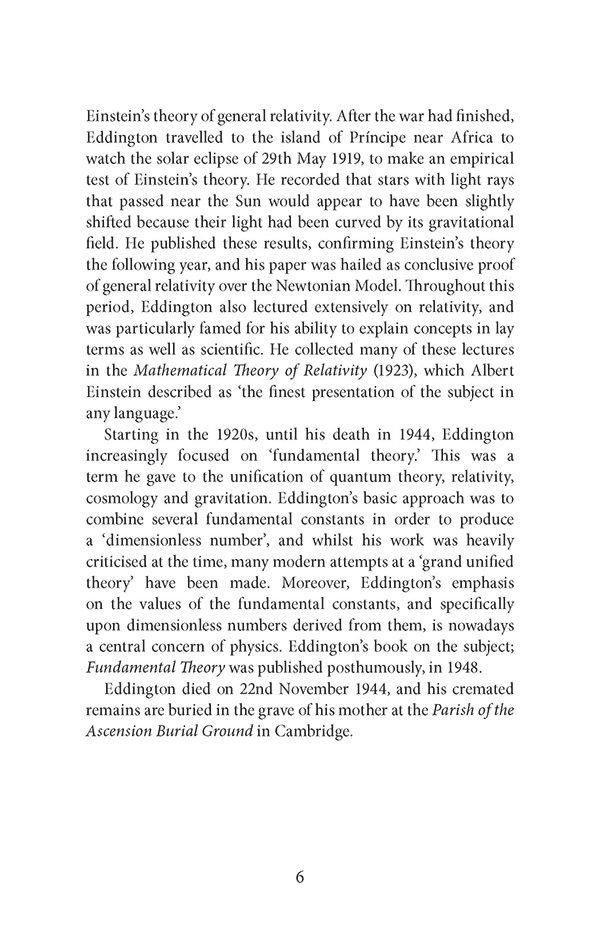 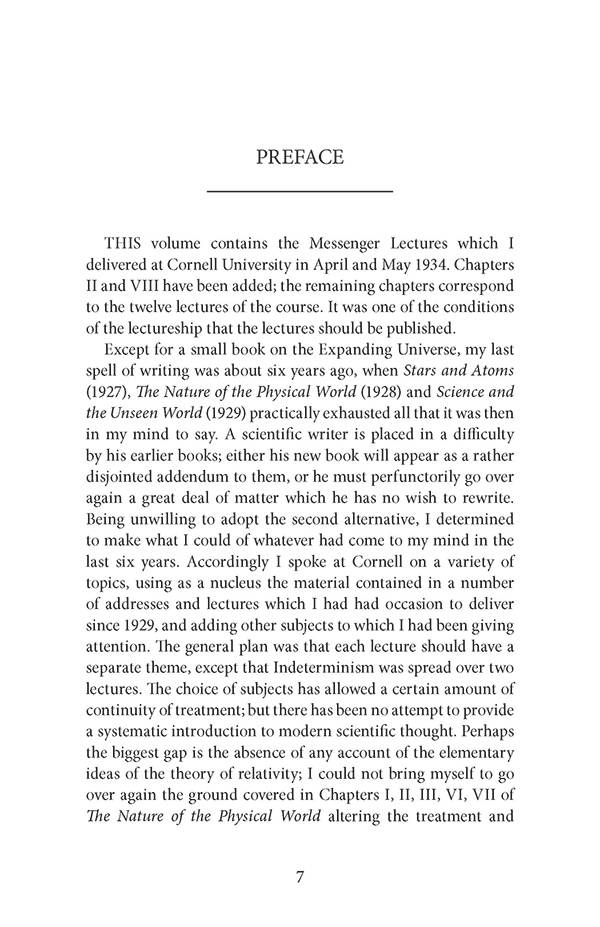 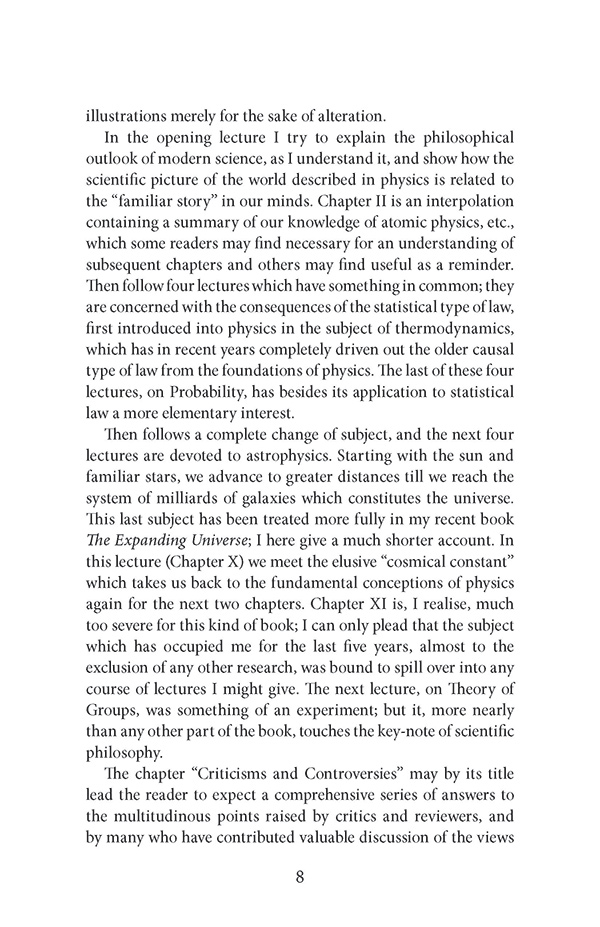 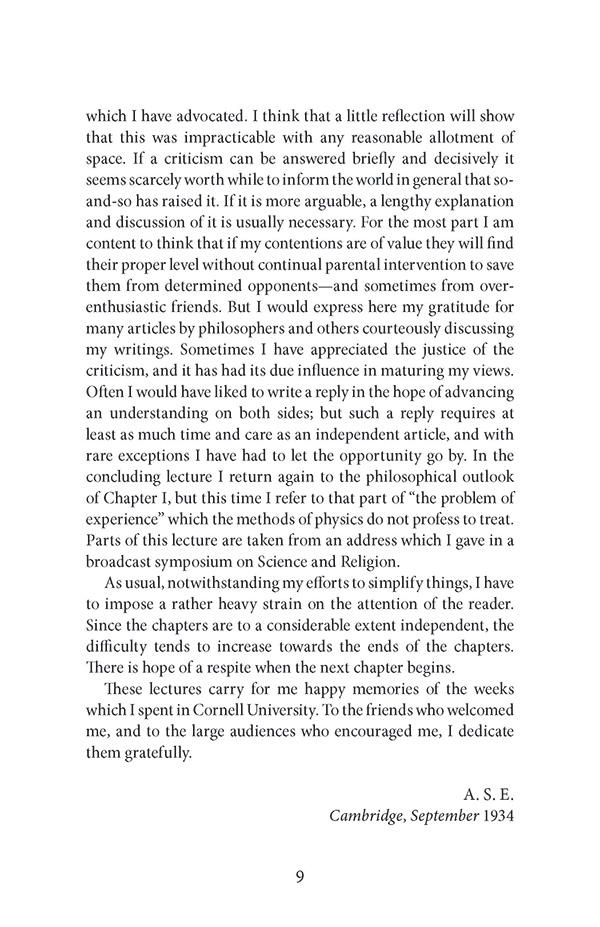 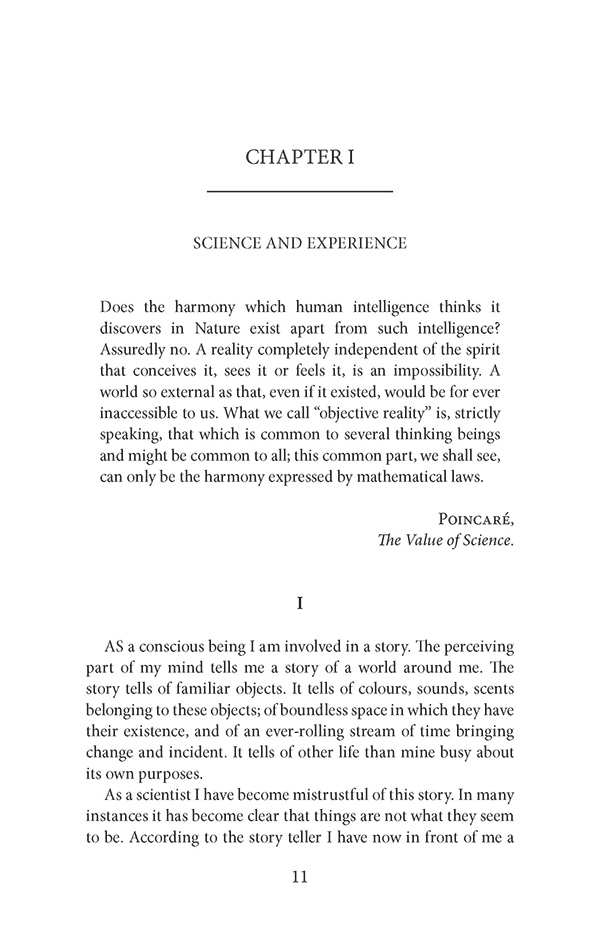 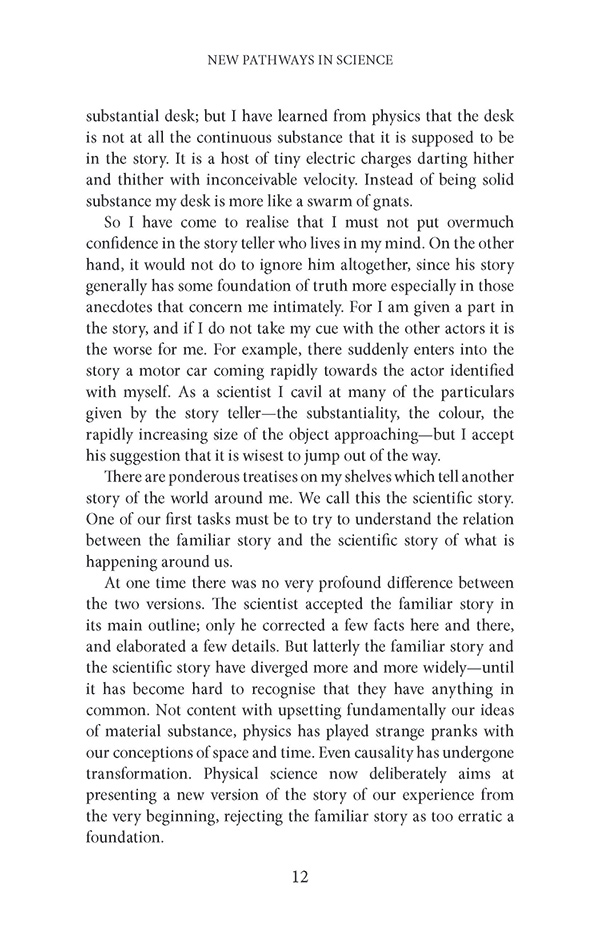 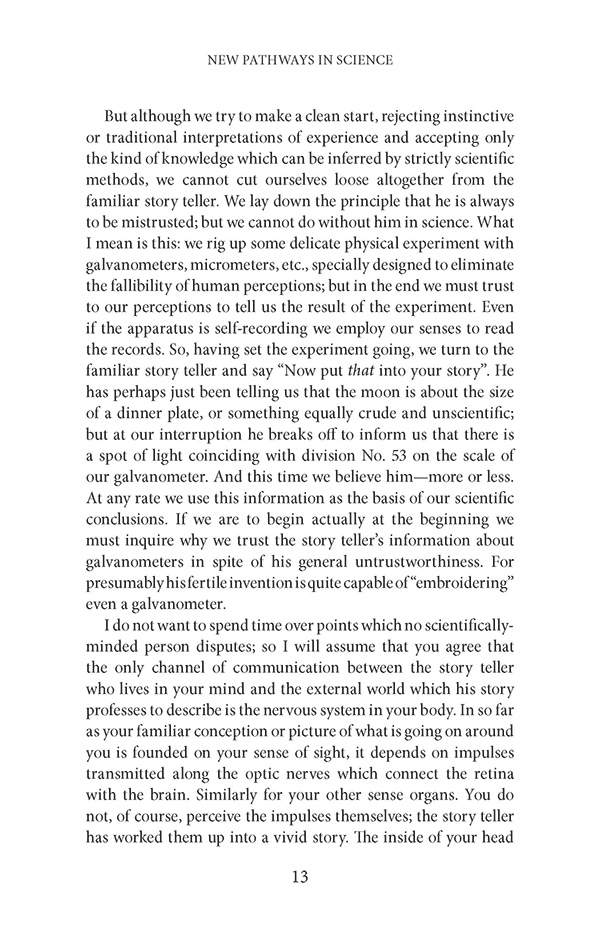 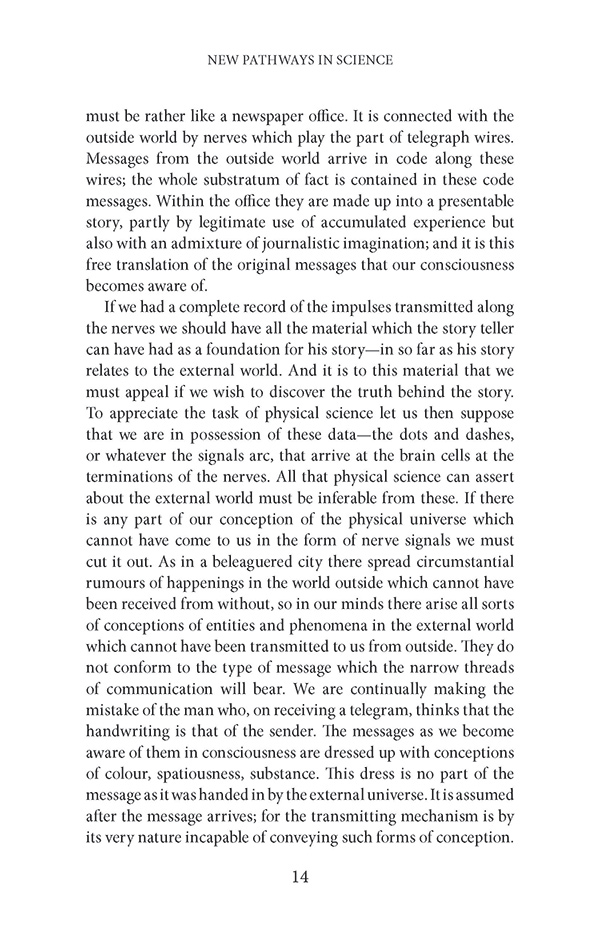 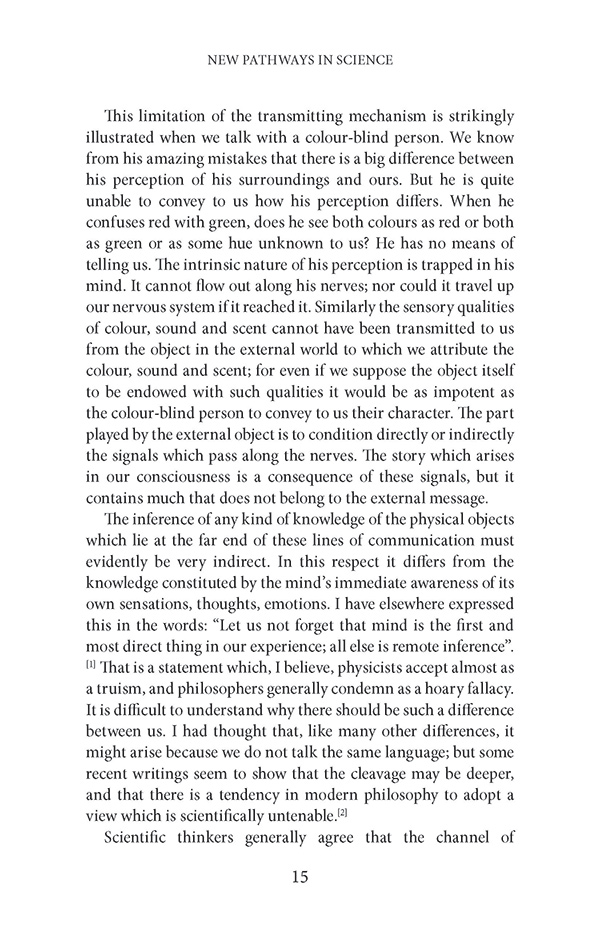 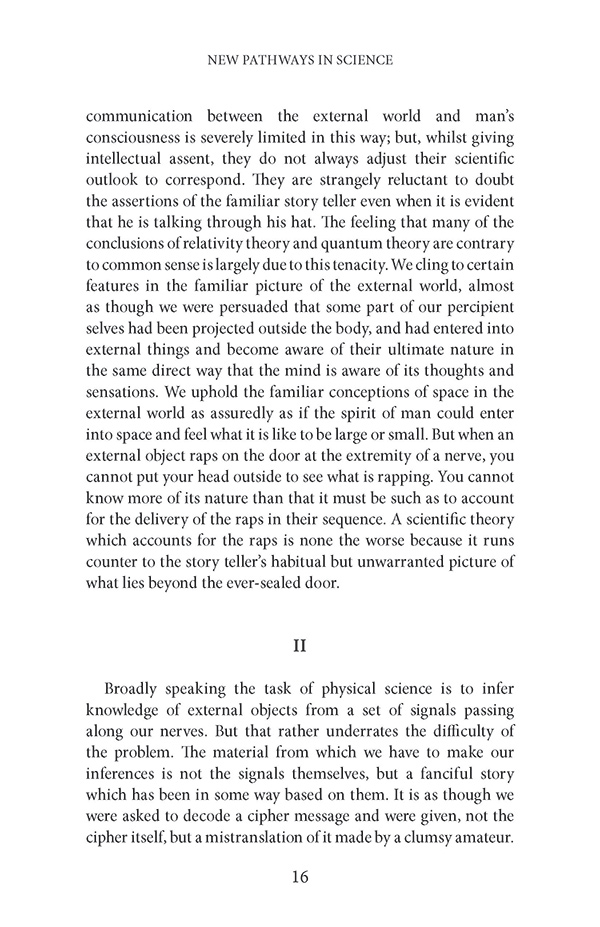 This book contains a discussion of the philosophical outlook of modern science, a summary of then-contemporary knowledge, and a number of fascinating and insightful lectures on the various scientific topics.

This vintage book contains a fascinating book on scientific theory and development, written by sir Arthur Eddington. It contains a discussion of the philosophical outlook of modern science, a summary of then-contemporary knowledge, and a number of fascinating and insightful lectures on the various scientific topics. The chapters of this book include: ‘Science and Experience’, ‘Dramatis Personae’, ‘The End of the World’, ‘The Decline of Determinism’, ‘Indeterminacy and Quantum Theory’, ‘Probability’, ‘The Constitution of the Stars’, ‘Subatomic Energy’, ‘Cosmic Clouds and Nebulae’, and more. We are republishing this vintage text now in an affordable, modern edition – complete with a specially commissioned new biography of the author.

Sir Arthur Stanley Eddington was born on 28th December 1882, in Kendal, England. He was an astrophysicist and philosopher of science, best known for explaining Einstein’s theory of general relativity to the English speaking world.

Eddington grew up in a Quaker household, although sadly his father died in the typhoid epidemic of 1884, leaving his mother to bring up two children on relatively little income. He spent his early education at the local Brynmelyn School, where he evidenced strong academic capabilities leading him to win a scholarship to Owen’s College Manchester (later to become the University of Manchester) where he studied physics for the next three years. On the basis of his performance at Owen’s, Eddington was awarded a scholarship to Trinity College, Cambridge in 1902, from whence he graduated M.A. in 1905. The following year, he was appointed chief assistant to the Astronomer Royal at the Royal Greenwich observatory.

Eddington developed a new statistical method, based on the apparent drift of two backward stars, which won him the Smith’s Prize in 1907 – and further resulted in his appointment as a Fellow at Trinity College. He also investigated the interior of stars through theoretical means, and developed the first true understanding of stellar processes. In 1924, he also discovered the mass-luminosity relation for stars, the theory of which appeared in 1926 as The Internal Constitution of the Stars. To this day, the text has remained an important part of  astrophysical training.

During World War One, Eddington was Secretary of the Royal Astronomical Society, which meant he was the first to receive a series of letters and papers from Willem de Sitter regarding Einstein’s theory of general relativity. After the war had finished, Eddington travelled to the island of Príncipe near Africa to watch the solar eclipse of 29th May 1919, to make an empirical test of Einstein’s theory. He recorded that stars with light rays that passed near the Sun would appear to have been slightly shifted because their light had been curved by its gravitational field. He published these results, confirming Einstein’s theory the following year, and his paper was hailed as conclusive proof of general relativity over the Newtonian Model. Throughout this period, Eddington also lectured extensively on relativity, and was particularly famed for his ability to explain concepts in lay terms as well as scientific. He collected many of these lectures in the Mathematical Theory of Relativity (1923), which Albert Einstein described as ‘the finest presentation of the subject in any language.’

Starting in the 1920s, until his death in 1944, Eddington increasingly focused on ‘fundamental theory.’ This was a term he gave to the unification of quantum theory, relativity, cosmology and gravitation. Eddington’s basic approach was to combine several fundamental constants in order to produce a ‘dimensionless number’, and whilst his work was heavily criticised at the time, many modern attempts at a ‘grand unified theory’ have been made. Moreover, Eddington's emphasis on the values of the fundamental constants, and specifically upon dimensionless numbers derived from them, is nowadays a central concern of physics. Eddington’s book on the subject; Fundamental Theory was published posthumously, in 1948.

Eddington died on 22nd November 1944, and his cremated remains are buried in the grave of his mother at the Parish of the Ascension Burial Ground in Cambridge.

Be the first to review “New Pathways in Science” Cancel reply

Distances of the Stars