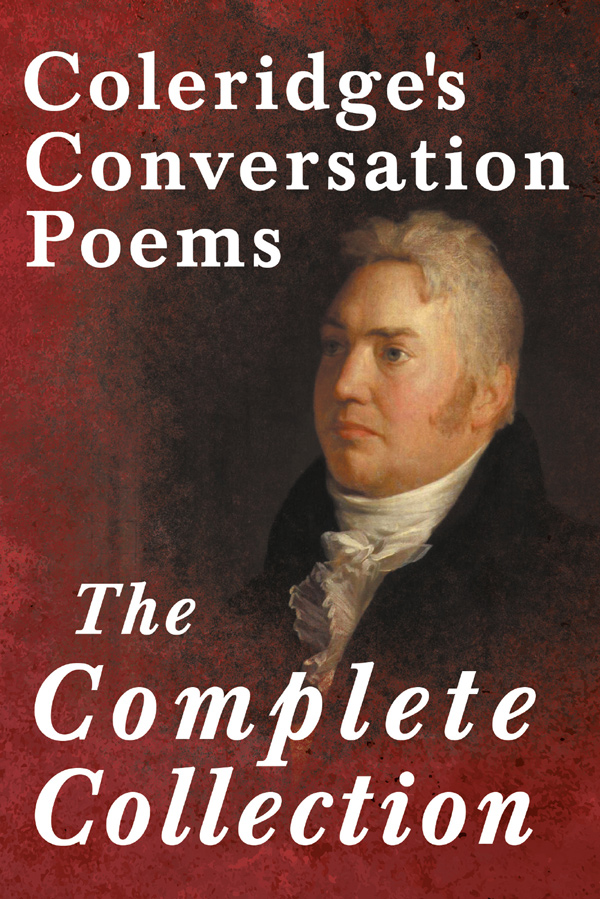 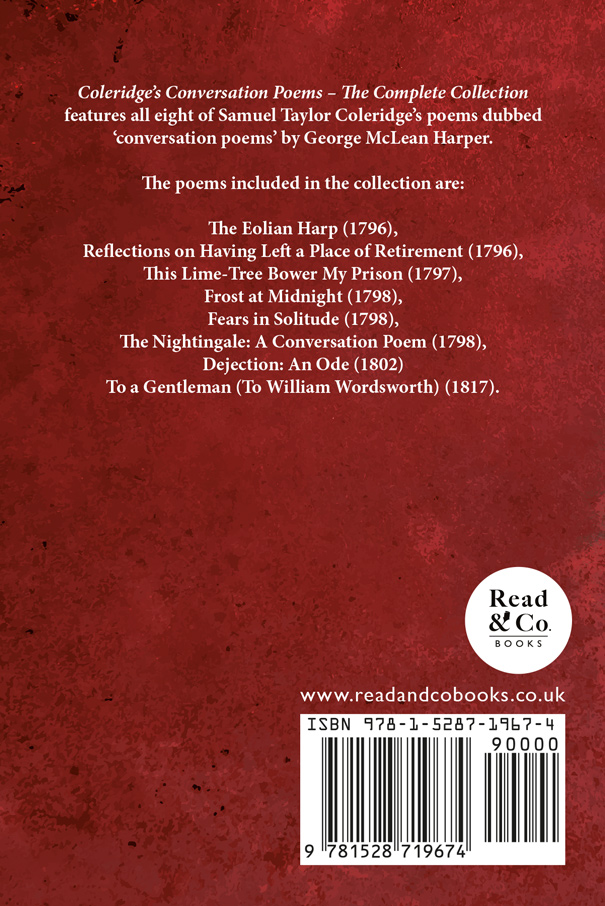 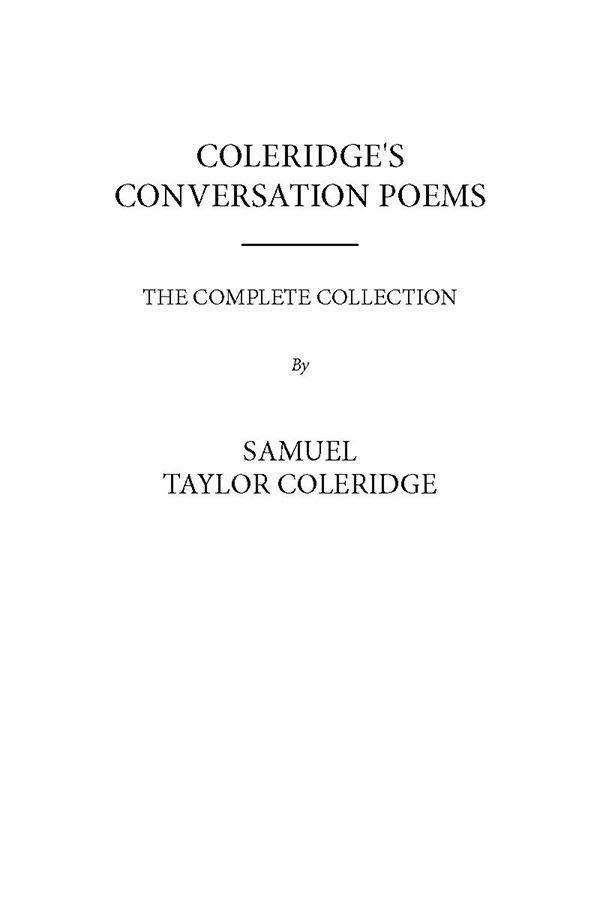 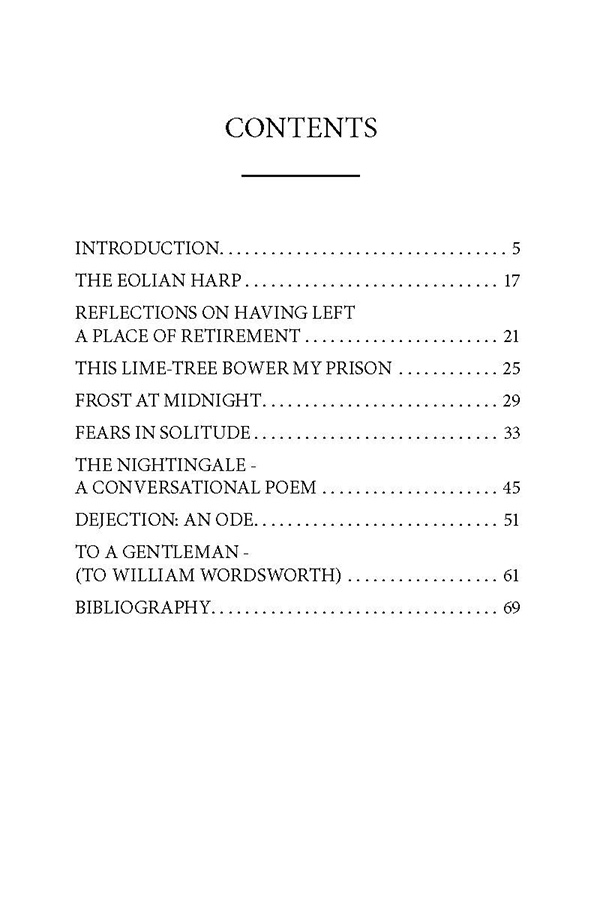 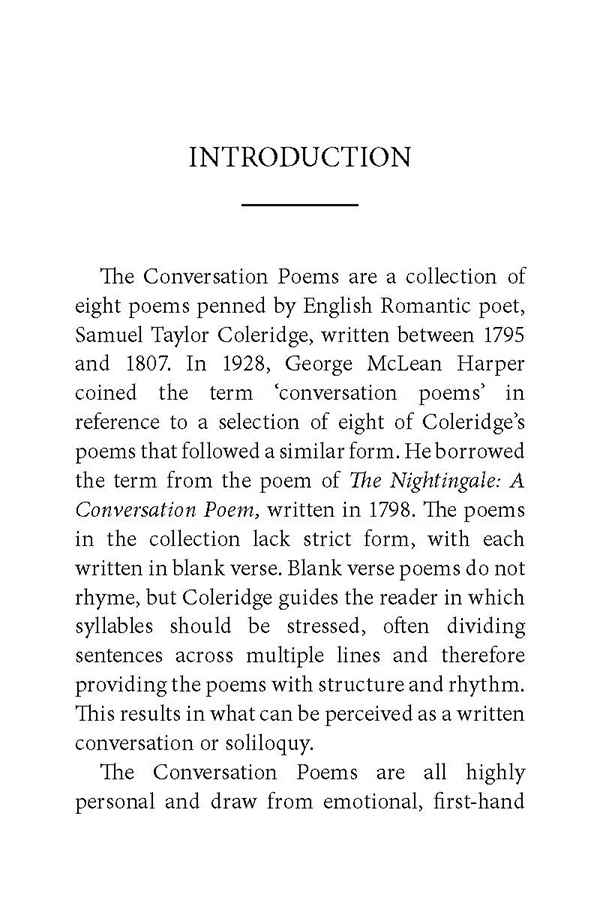 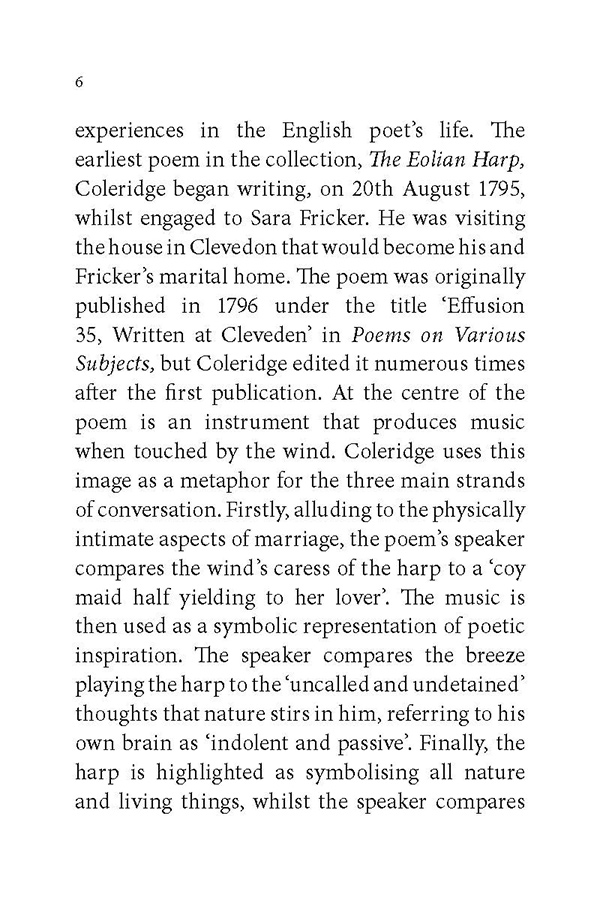 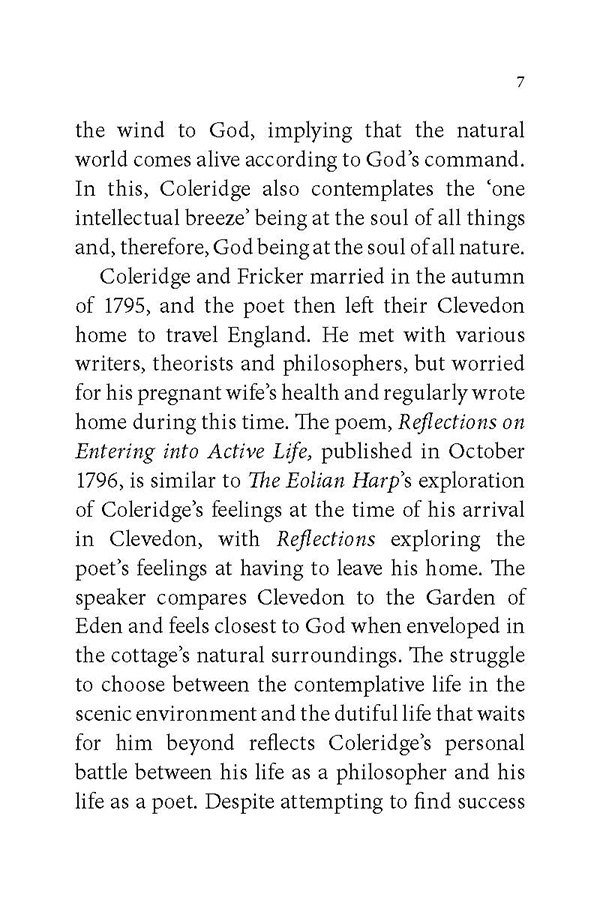 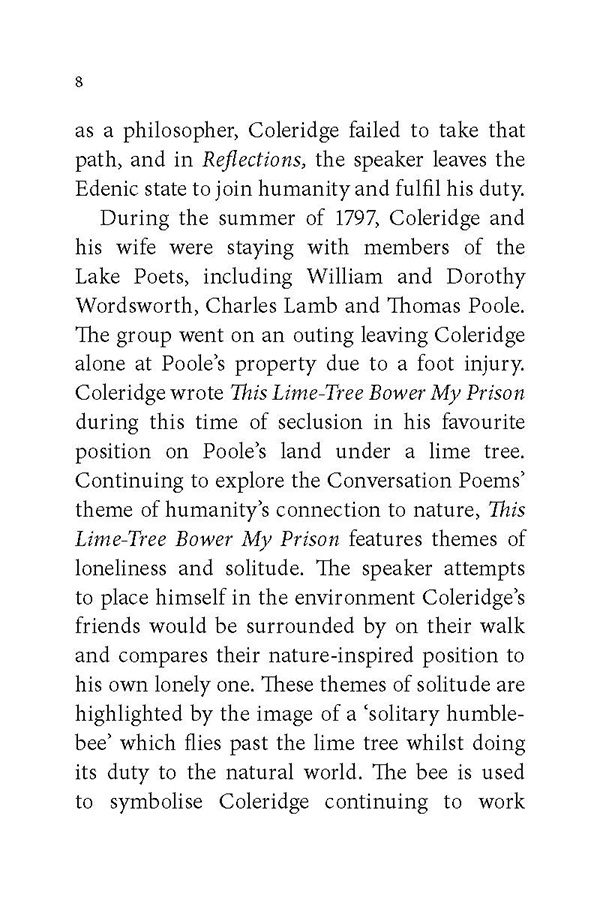 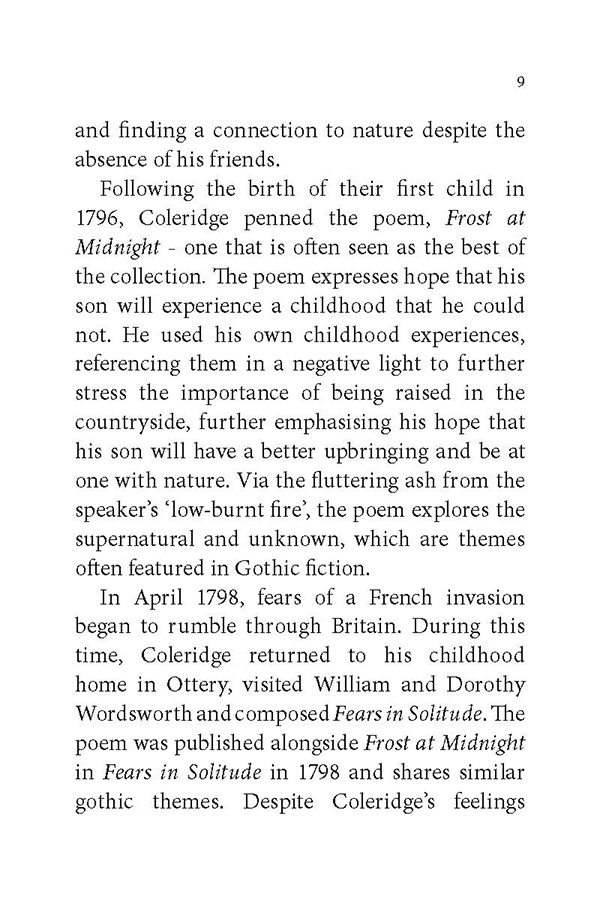 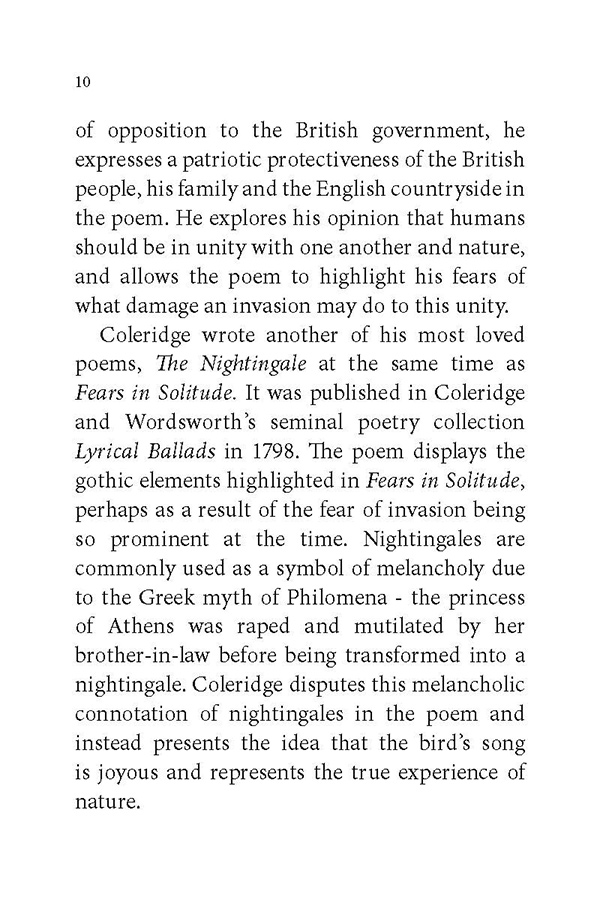 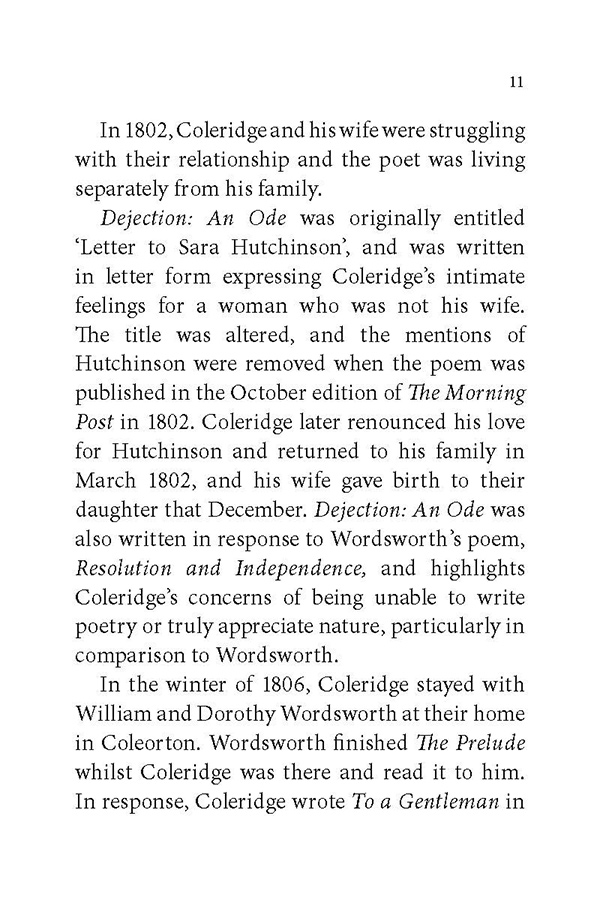 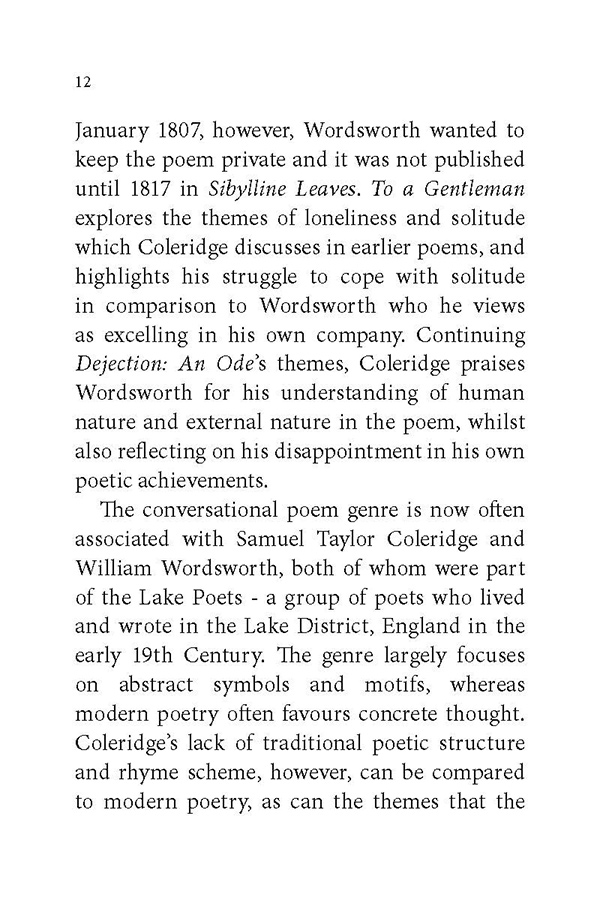 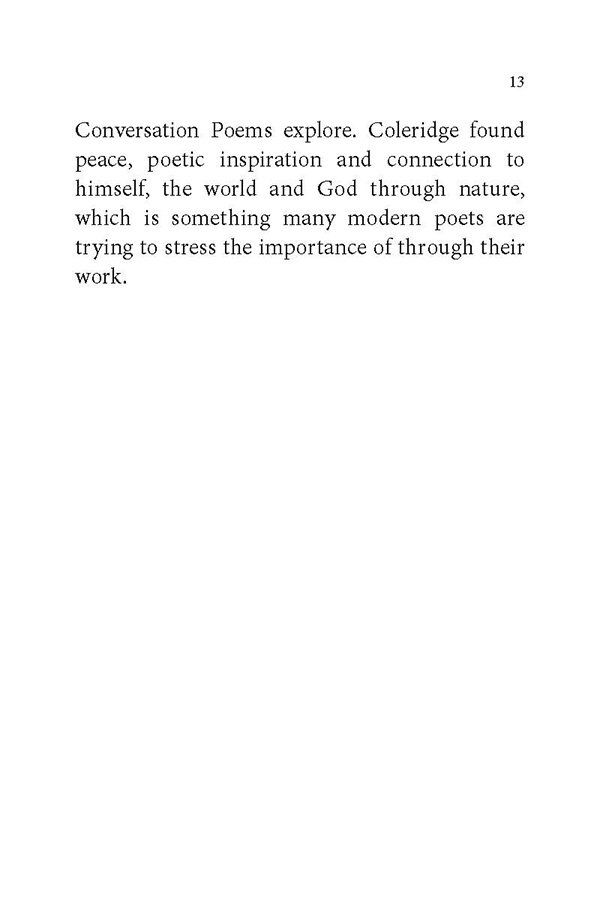 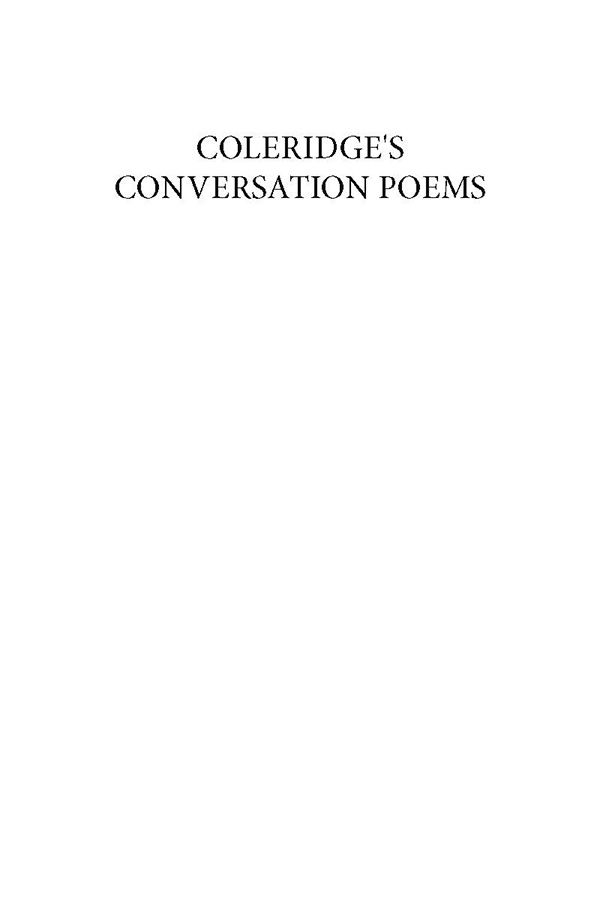 “Coleridge’s Conversation Poems – The Complete Collection” features all eight of Samuel Taylor Coleridge’s poems dubbed ‘conversation poems’ by George McLean Harper. The poems included in the collection are The Eolian Harp (1796), Reflections on Having Left a Place of Retirement (1796), This Lime-Tree Bower My Prison (1797), Frost at Midnight (1798), Fears in Solitude (1798), The Nightingale: A Conversation Poem (1798), Dejection: An Ode (1802) and To a Gentleman (To William Wordsworth) (1817). The collection explores themes of love and marriage, human nature and external nature, faith and God, and poetic inspiration. This book is the ideal gift for lovers of English poetry and the Lake Poets, and should not be missed by those interested in Romanticism.
Samuel Taylor Coleridge (1772 –1834) was an English poet and literary critic and is considered a founder of the Romantic movement alongside William Wordsworth and Robert Southey. His work is well-known for its reflections on nature and human relationships to each other, the world and God. Other famous examples of his work include Kubla Khan (1817) and his critical essays and lectures on William Shakespeare. Read & Co.’s Ragged Hand imprint is proud to be publishing a high-quality pocketbook as part of the Remembering Series, and hope fans of Coleridge will enjoy the complete collection of the Conversation Poems.

Poet, philosopher, and critic, son of the Rev. John C., vicar and schoolmaster of Ottery St. Mary, Devonshire, was born there in 1772, the youngest of 13 children.

He was at Christ's Hospital from 1782 to 1790, and had Charles Lamb for a schoolfellow, and the famous scholar and disciplinarian, James Boyer, for his master. Thence he proceeded to Jesus College, Cambridge, in 1791, where he read much, but desultorily, and got into debt. The troubles arising thence and also, apparently, a disappointment in love, led to his going to London and enlisting in the 15th Dragoons under the name of Silas Tomkyn Comberbacke. He could not, however, be taught to ride, and through some Latin lines written by him on a stable door, his real condition was discovered, his friends communicated with, and his release accomplished, his brothers buying him off. After this escapade he returned (1794) to Cambridge. He had by this time imbibed extreme democratic or, as he termed them, pantisocratic principles, and on leaving Cambridge in the same year he visited Oxford, where he made the acquaintance of Southey, and discussed with him a project of founding a "pantisocracy" on the banks of the Susquehanna, a scheme which speedily fell through, owing firstly to want of funds, and secondly to the circumstance of the two projectors falling in love simultaneously with two sisters, Sarah and Edith Fricker, of whom the former became, in 1795, the wife of Coleridge and the latter of Southey.

Coleridge had spent one more term at Cambridge, and there in September 1794 his first work, The Fall of Robespierre, a drama, to which Southey contributed two acts, the second and third, was published. After his marriage he settled first at Clevedon, and thereafter at Nether Stowey, Somerset, where he had Wordsworth for a neighbour, with whom he formed an intimate association.

About 1796 he fell into the fatal habit of taking laudanum, which had such disastrous effects upon his character and powers of will. In the same year Poems on various Subjects appeared, and a little later Ode to the Departing Year. While at Nether Stowey he was practically supported by Thomas Poole, a tanner, with whom he had formed a friendship. Here he wrote The Ancient Mariner, the first part of Christabel and Kubla Khan, and here he joined with Wordsworth in producing the Lyrical Ballads.

Some time previously he had become a Unitarian, and was much engaged as a preacher in that body, and for a short time acted as a minister at Shrewsbury. Influenced by Josiah and Thomas Wedgwood, who each in 1798 gave him an annuity of £75 on condition of his devoting himself to literature he resigned this position, and soon afterwards went to Germany, where he remained for over a year, an experience which profoundly influenced the future development of his intellect. On his return he made excursions with Southey and Wordsworth, and at the end of 1799 went to London, where he wrote and reported for the Morning Post. His great translation of Schiller's Wallenstein appeared in 1800. In the same year he migrated to Greta Hall, near Keswick, where he wrote the second part of Christabel. Soon after this his health gave way, and he suffered much; and, whether as the cause or the consequence of this, he had become a slave to opium. In 1804 he went to Malta in search of health, and there became the friend of the governor, Sir Alexander Ball, who appointed him his sec., in which position he showed remarkable capacity for affairs. Resigning this occupation, of which he had become tired, he travelled in Italy, and in the beginning of 1806 reached Rome, where he enjoyed the friendship of Tieck, Humboldt, and Bunsen. He returned to England in the end of 1806, and in 1808 delivered his first course of lectures on Shakespeare at the Royal Institution, and thereafter (1809), leaving his family at Keswick, he went to live with Wordsworth at Grasmere. Here he started The Friend a philosophical and theological periodical, which lasted for 9 months. That part of his annuity contributed by T. Wedgwood had been confirmed to him by will in 1805, and this he allowed to his wife, but in 1811 the remaining half was stopped. He delivered a second course of lectures in London, and in 1813 his drama, Remorse, was acted at Drury Lane with success. Leaving his family dependent upon Southey, he lived with various friends, first, from 1816 to 1819, with John Morgan at Calne. While there he published Christabel and Kubla Khan in 1816, and in 1817 Biographia Literaria, Sybilline Leaves, and an autobiography. In 1818 he appeared for the last time as a lecturer. He found in 1819 a final resting-place in the household of James Gillman, a surgeon, at Highgate.

His life thenceforth was a splendid wreck. His nervous system was shattered, and he was a constant sufferer. Yet these last years were, in some respects, his best. He maintained a struggle against opium which lasted with his life, and though he ceased to write much, he became the revered centre of a group of disciples, including such men as Sterling, Maurice, and Hare, and thus indirectly continued and increased his influence in the philosophic and theological thought of his time. He returned to Trinitarianism, and a singular and childlike humility became one of his most marked characteristics. In 1824 he was elected an Associate of the Royal Society of Literature, which brought him a pension of 100 guineas. His latest publications were Aids to Reflection (1825) and The Constitution of Church and State. After his death there were published, among other works, Table Talk (1835), Confessions of an Enquiring Spirit (1840), Letters and Anima Poetæ (1895).

Endowed with an intellect of the first order, and an imagination at once delicate and splendid, Coleridge, from a weakness of moral constitution, and the lamentable habit already referred to, fell far short of the performance which he had planned, and which included various epic poems, and a complete system of philosophy, in which all knowledge was to be co-ordinated. He has, however, left enough poetry of such excellence as to place him in the first rank of English poets, and enough philosophic, critical, and theological matter to constitute him one of the principal intellectually formative forces of his time. His knowledge of philosophy, science, theology, and literature was alike wide and deep, and his powers of conversation, or rather monologue, were almost unique. A description of him in later life tells of "the clerical-looking dress, the thick, waving, silver hair, the youthful coloured cheek, the indefinable mouth and lips, the quick, yet steady and penetrating greenish-grey eye, the slow and continuous enunciation, and the everlasting music of his tones."

A Biography by John William Cousin,
A Short Biographical Dictionary of English Literature, 1910

Be the first to review “Coleridge’s Conversation Poems” Cancel reply

Sir Gawain and the Green Knight