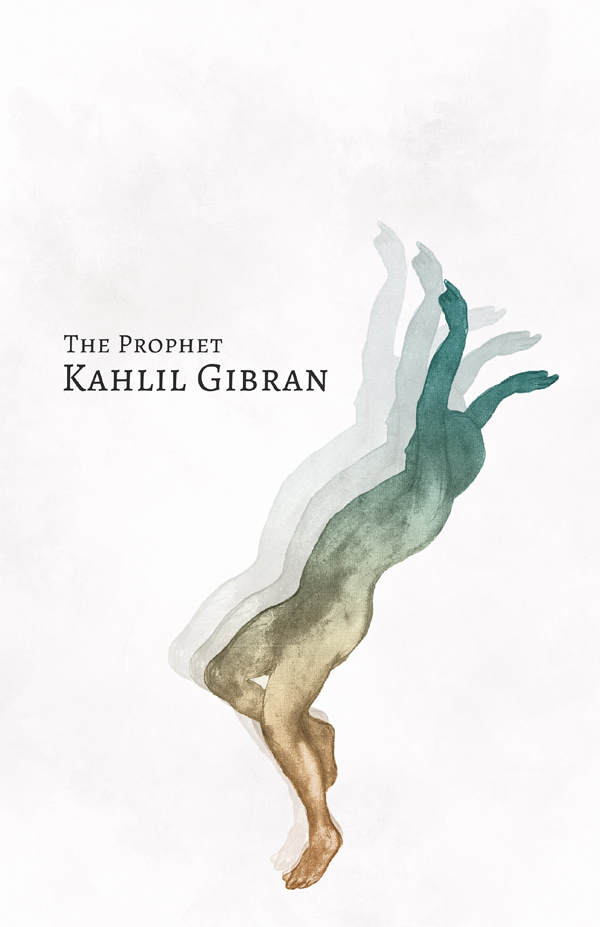 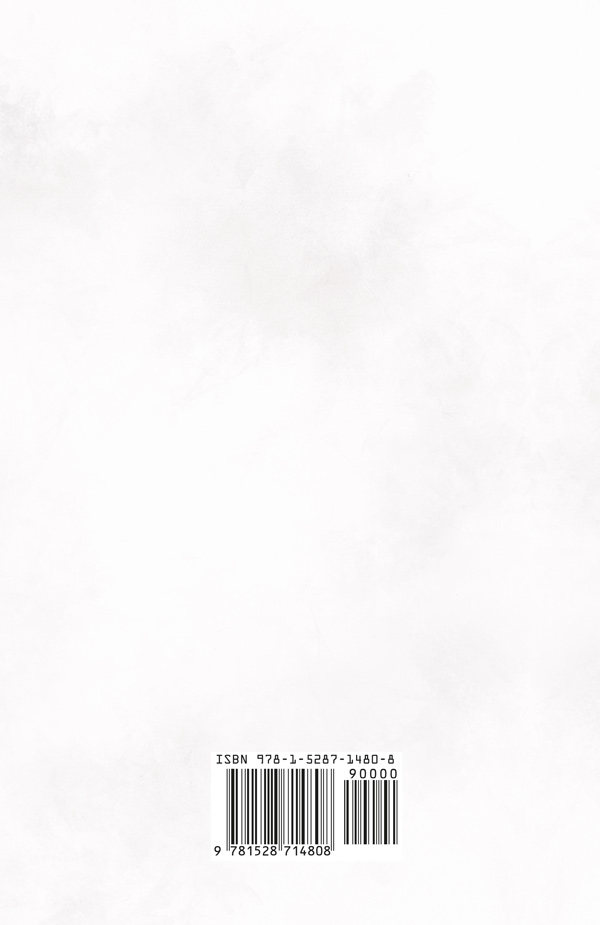 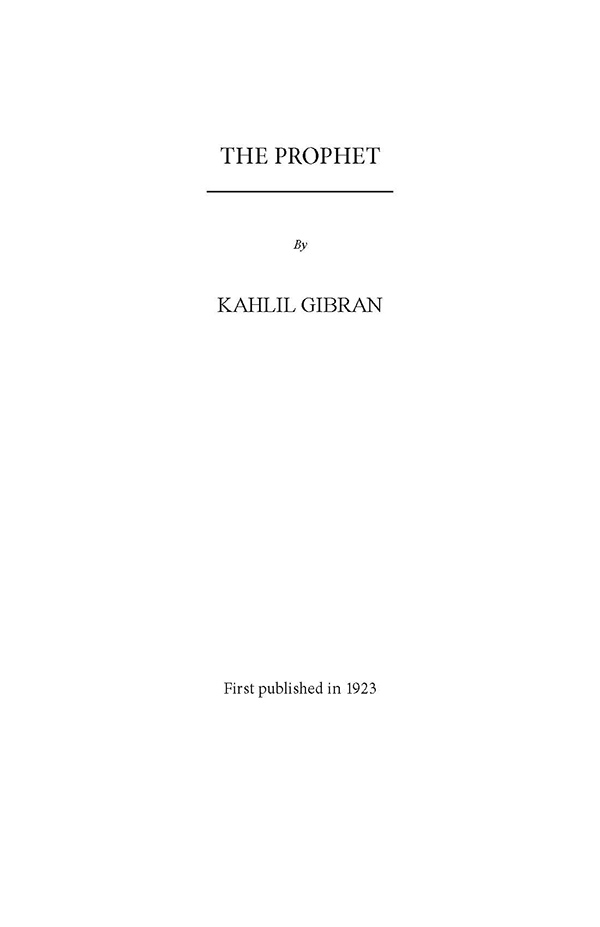 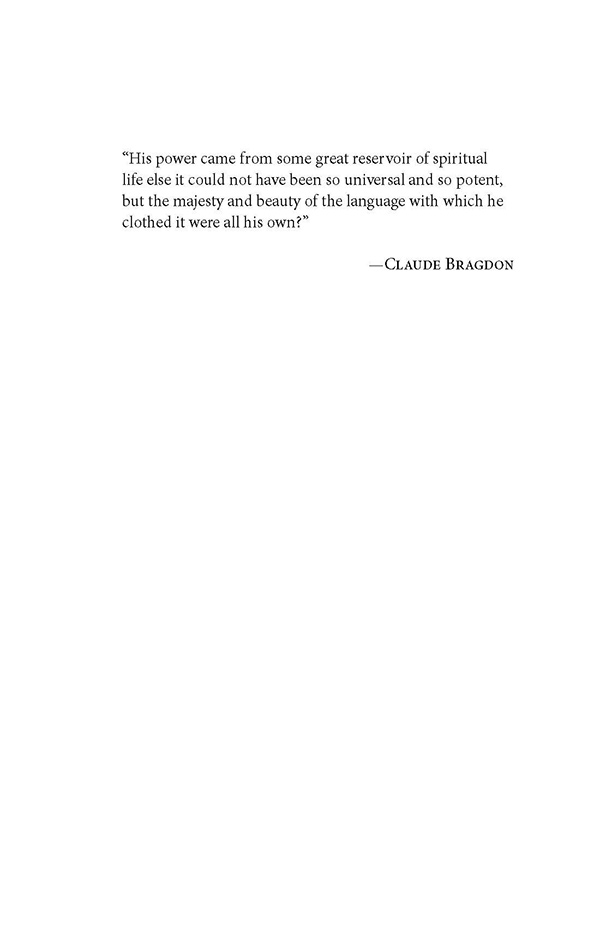 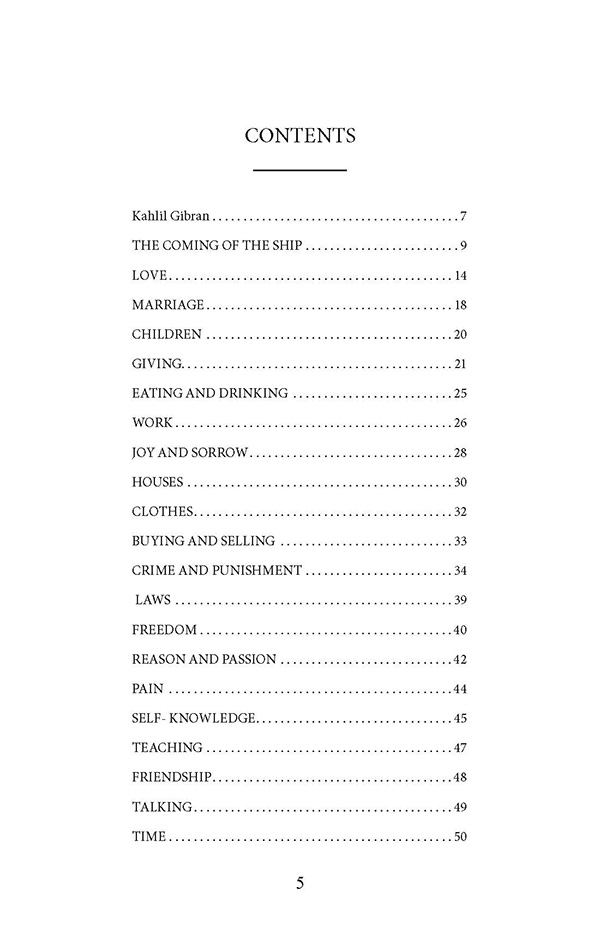 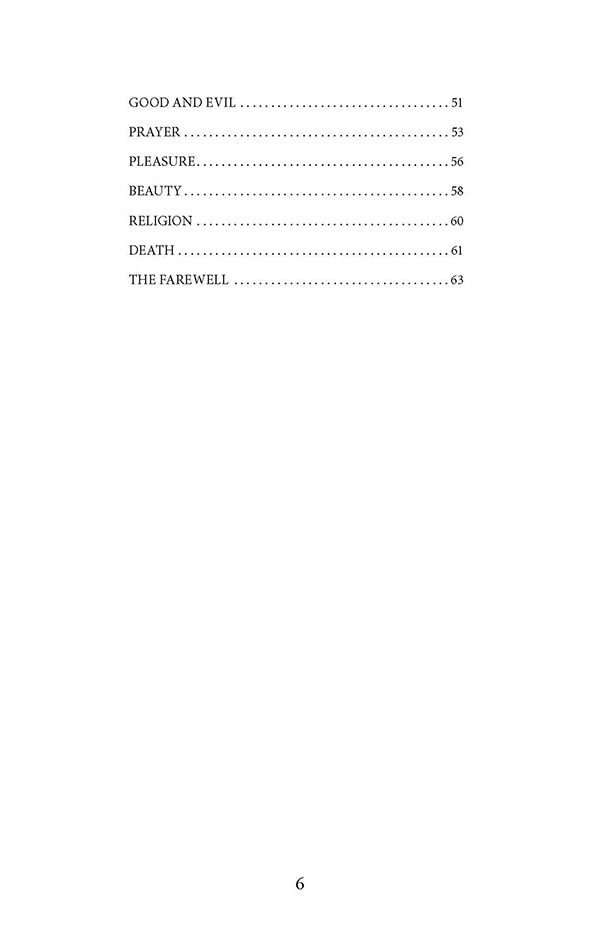 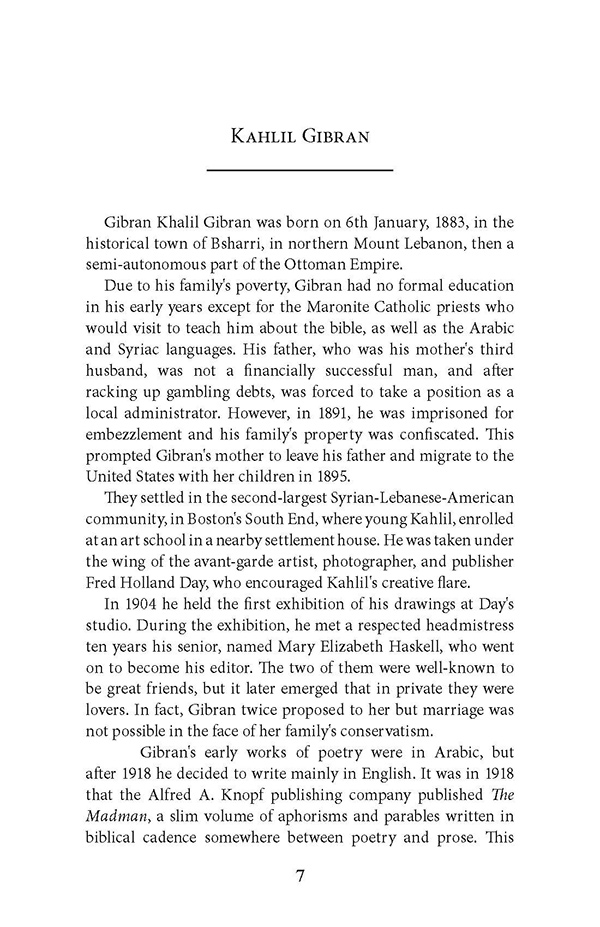 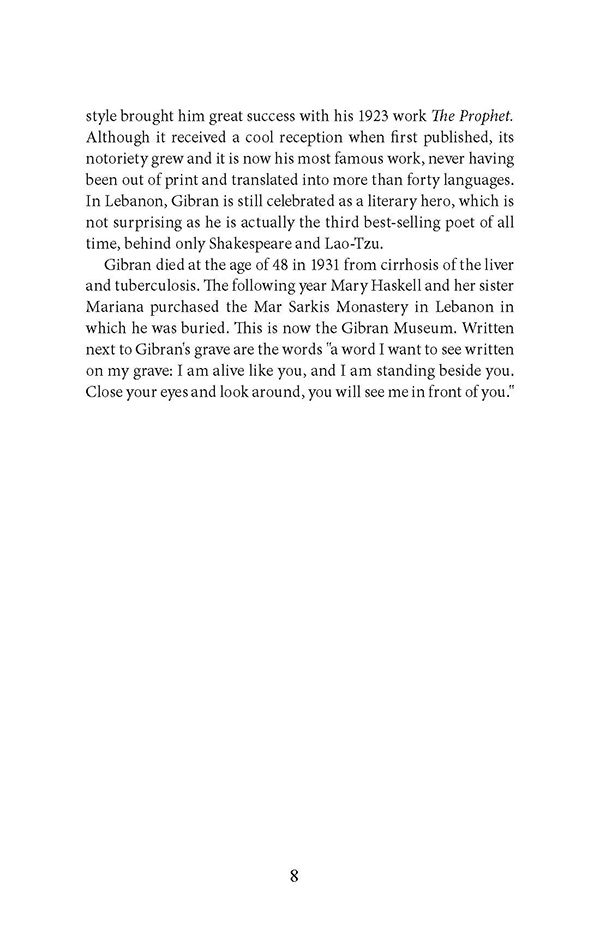 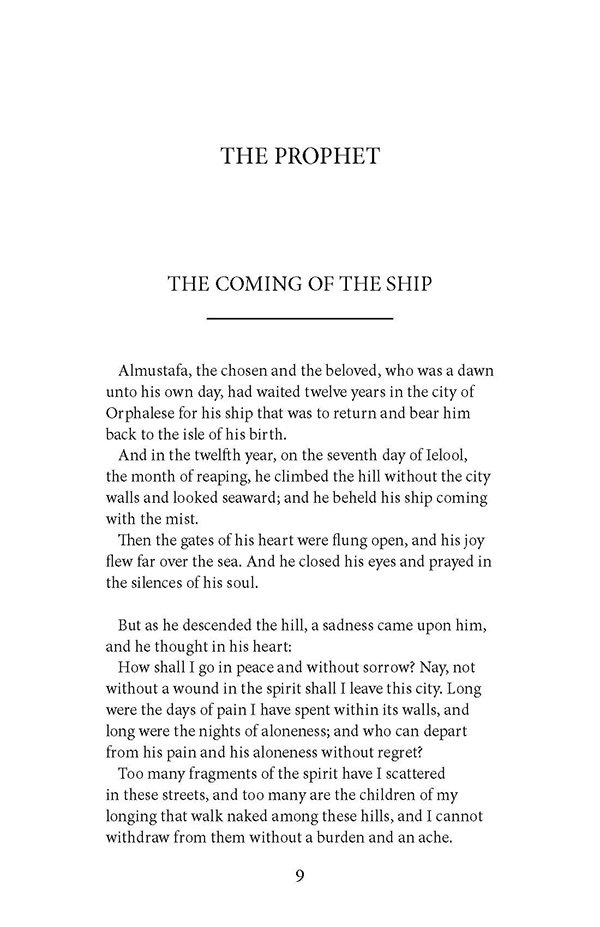 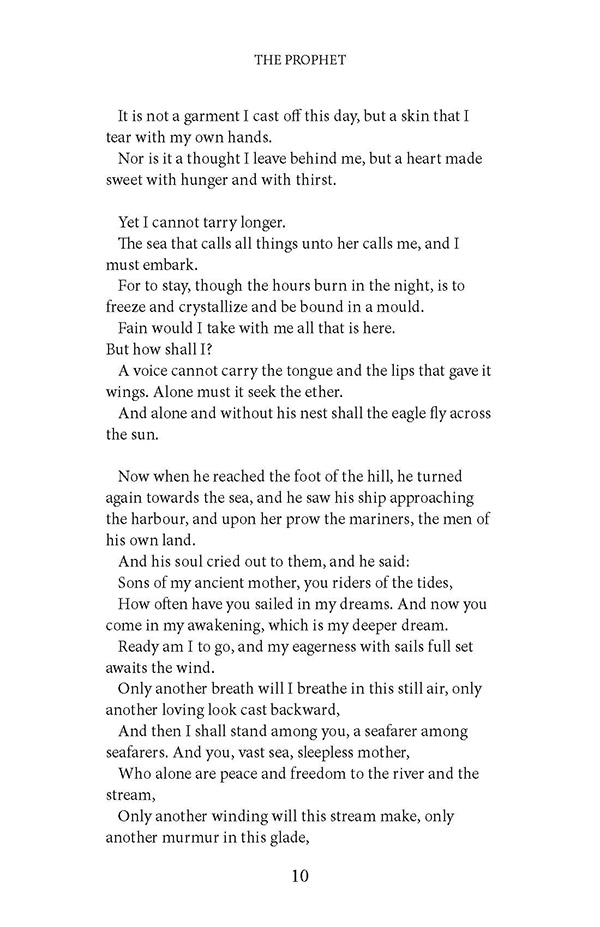 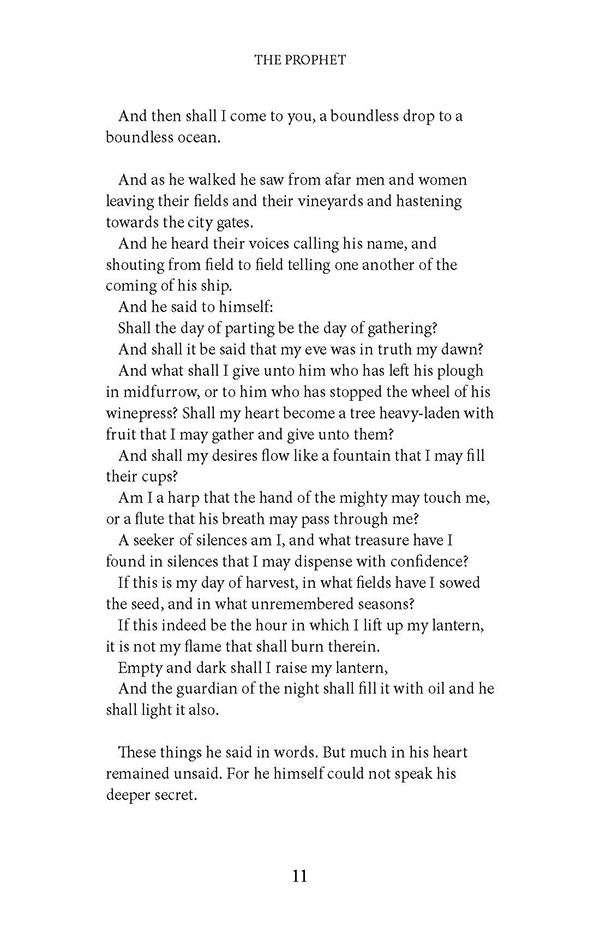 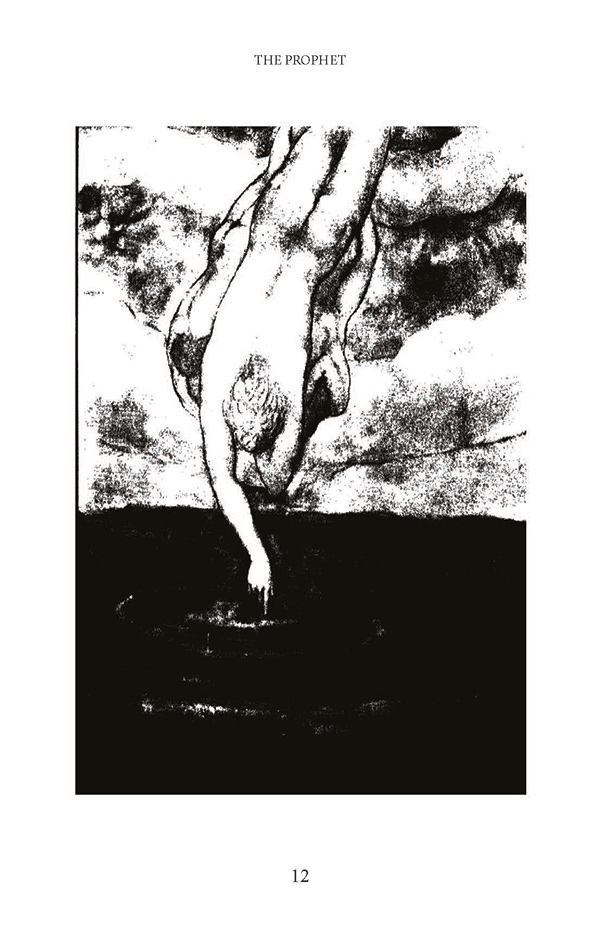 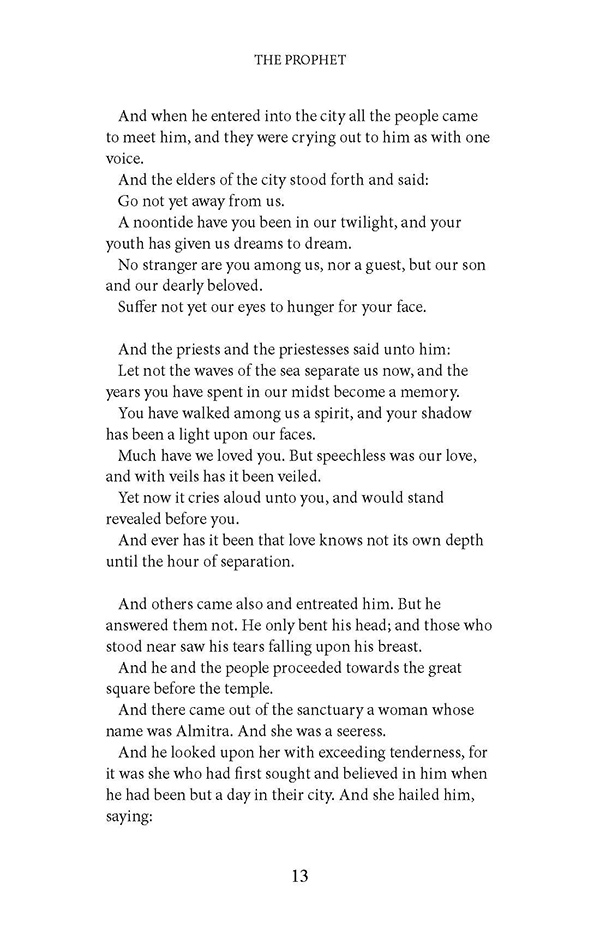 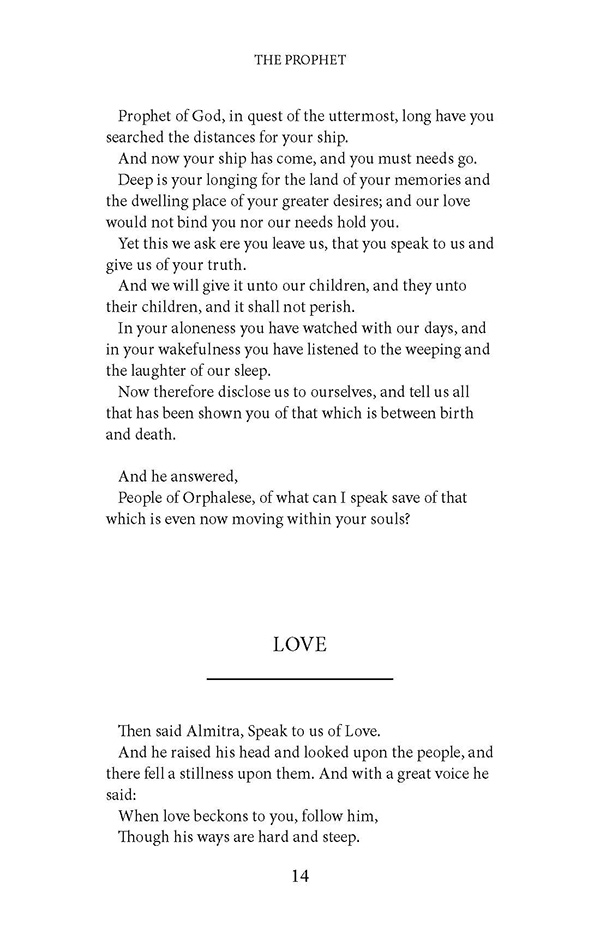 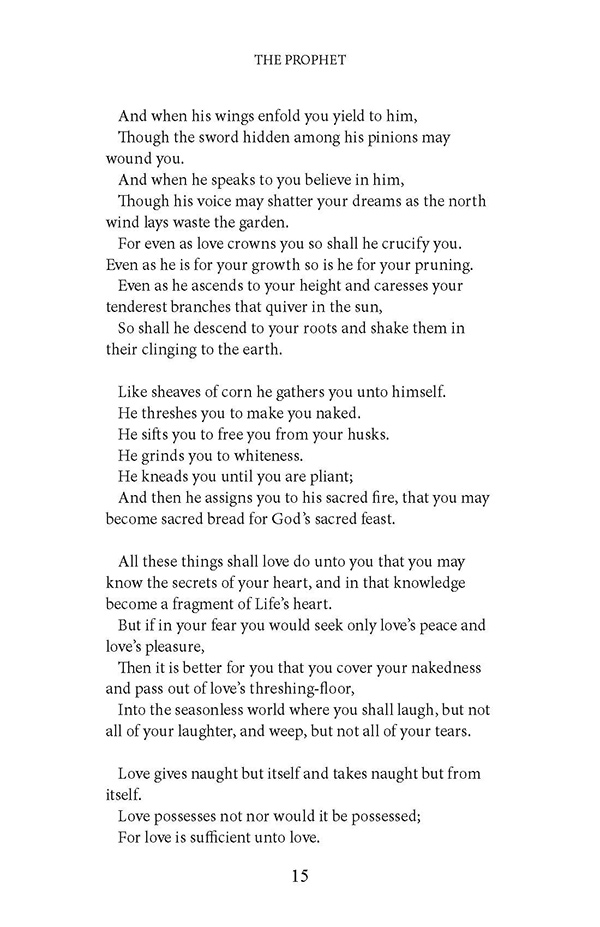 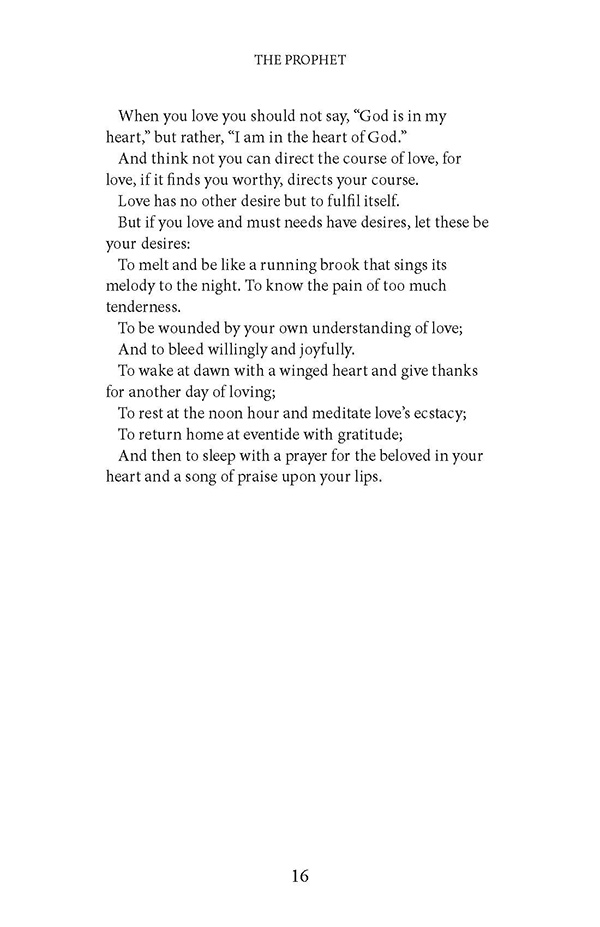 Al Mustafa, the prophet, is preparing to leave the city he has called home for 12 years when he is stopped by a group of people, who proceed to ask him many questions related to the nature of life and being human. The main contents of this book comprise his answers, which take the form of aphoristic advice and suggestions.

Originally published in 1923, “The Prophet” is a book containing twenty-six prose fables written by Lebanese-American poet Kahlil Gibran. Al Mustafa, the prophet, is preparing to leave the city he has called home for 12 years when he is stopped by a group of people, who proceed to ask him many questions related to the nature of life and being human. The main contents of this book comprise his answers, which take the form of aphoristic advice and suggestions. Gibran’s masterpiece has been translated into more than 100 languages, making it among the most translated books ever written. Gibran Khalil Gibran (1883 – 1931) was a Lebanese-American poet, writer, and artist whose work covers such themes as justice, religion, science, free will, love, happiness, the soul, the body, and death. He is widely considered to have been one of the most important figures in Arabic poetry and literature during the first half of the twentieth century. Other notable works by this author include: “Music” (1905), “Rebellious Spirits” (1908), and “Broken Wings” (1912). Many vintage books such as this are becoming increasingly scarce and expensive. We are republishing this volume now in an affordable, modern, high-quality edition complete with a specially-commissioned new biography of the author.

Gibran Khalil Gibran was born on 6th January, 1883, in the historical town of Bsharri, in northern Mount Lebanon, then a semi-autonomous part of the Ottoman Empire.

Due to his family's poverty, Gibran had no formal education in his early years except for the Maronite Catholic priests who would visit to teach him about the bible, as well as the Arabic and Syriac languages. His father, who was his mother's third husband, was not a financially successful man, and after racking up gambling debts, was forced to take a position as a local administrator. However, in 1891, he was imprisoned for embezzlement and his family's property was confiscated. This prompted Gibran's mother to leave his father and migrate to the United States with her children in 1895.

They settled in the second-largest Syrian-Lebanese-American community, in Boston's South End, where young Kahlil, enrolled at an art school in a nearby settlement house. He was taken under the wing of the avant-garde artist, photographer, and publisher Fred Holland Day, who encouraged Kahlil's creative flare.

In 1904 he held the first exhibition of his drawings at Day's studio. During the exhibition, he met a respected headmistress ten years his senior, named Mary Elizabeth Haskell, who went on to become his editor. The two of them were well-known to be great friends, but it later emerged that in private they were lovers. In fact, Gibran twice proposed to her but marriage was not possible in the face of her family's conservatism.

Gibran's early works of poetry were in Arabic, but after  1918 he decided to write mainly in English. It was in 1918 that the Alfred A. Knopf publishing company published The Madman, a slim volume of aphorisms and parables written in biblical cadence somewhere between poetry and prose. This style brought him great success with his 1923 work The Prophet. Although it received a cool reception when first published, its notoriety grew and it is now his most famous work, never having been out of print and translated into more than forty languages. In Lebanon, Gibran is still celebrated as a literary hero, which is not surprising as he is actually the third best-selling poet of all time, behind only Shakespeare and Lao-Tzu.

Gibran died at the age of 48 in 1931 from cirrhosis of the liver and tuberculosis. The following year Mary Haskell and her sister Mariana purchased the Mar Sarkis Monastery in Lebanon in which he was buried. This is now the Gibran Museum. Written next to Gibran's grave are the words

"A word I want to see written on my grave:
I am alive like you, and I am standing beside you.
Close your eyes and look around, you will see me in front of you."

The Science of Being Well

A Compendium of the Raja Yoga Philosophy