Log In
This book can be found in:
Fiction | Crime, Mystery & Thrillers
Fiction | Short Stories & Anthologies 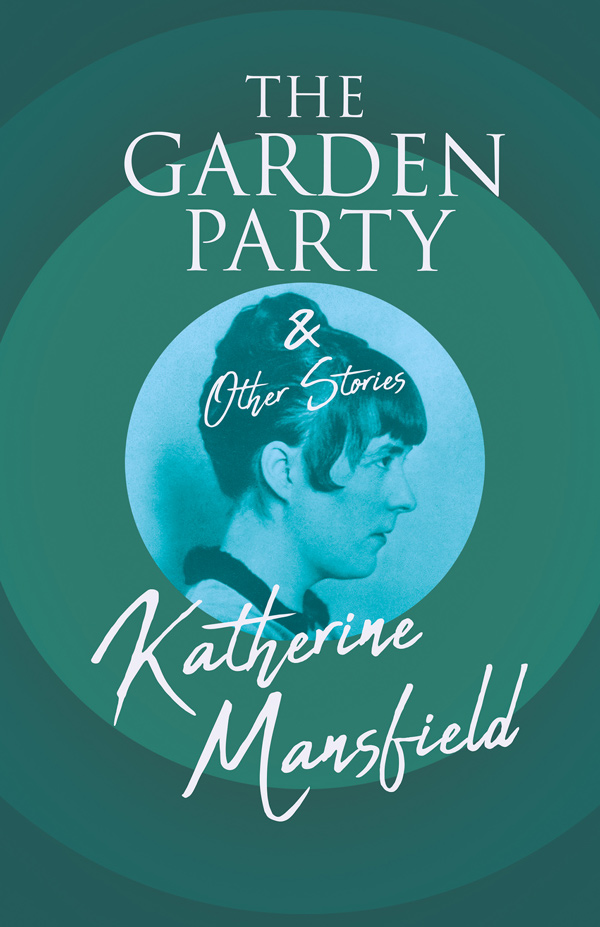 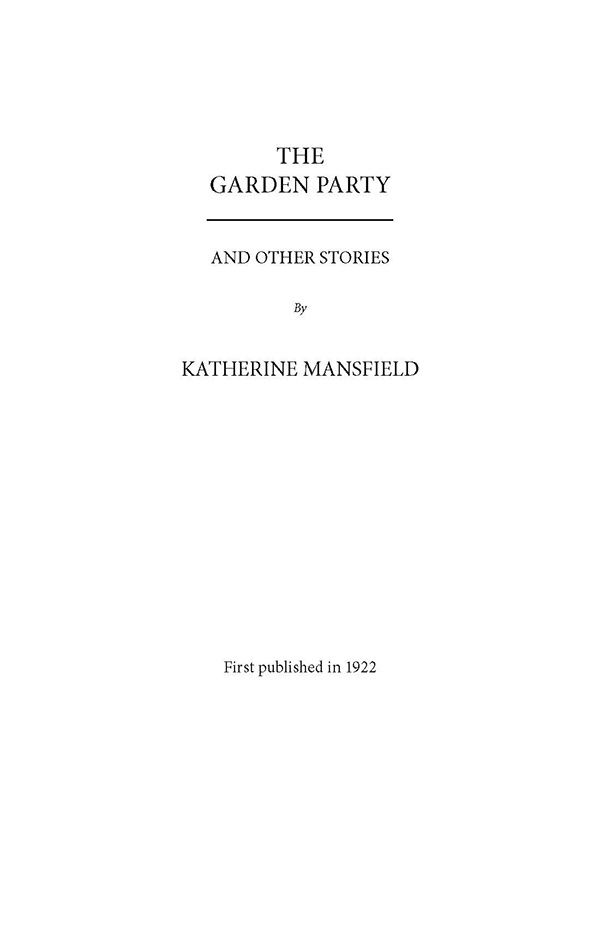 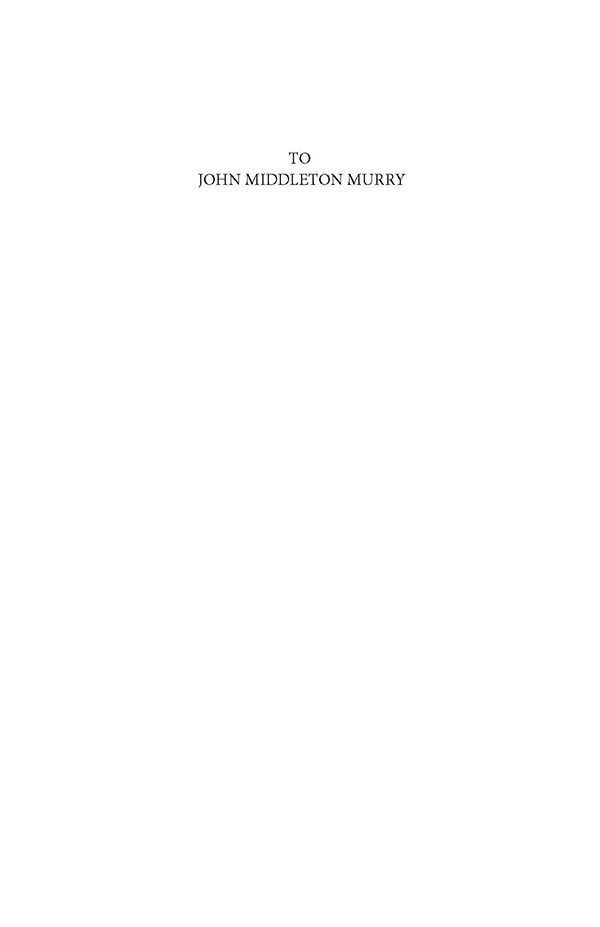 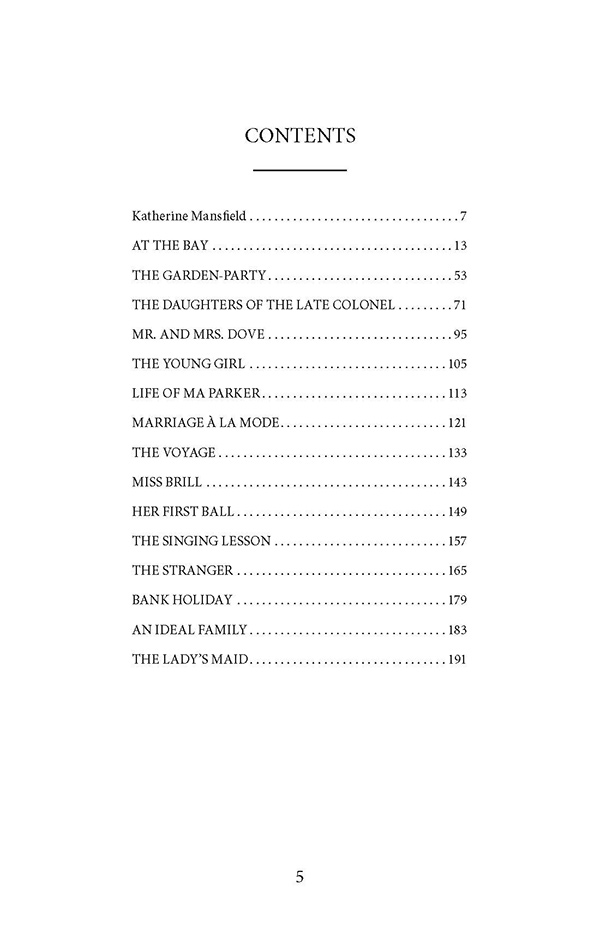 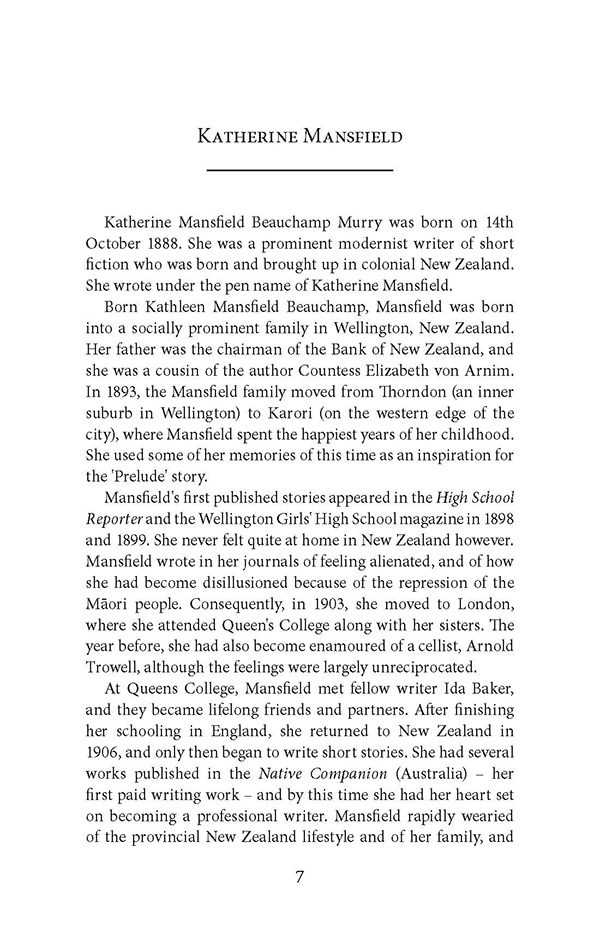 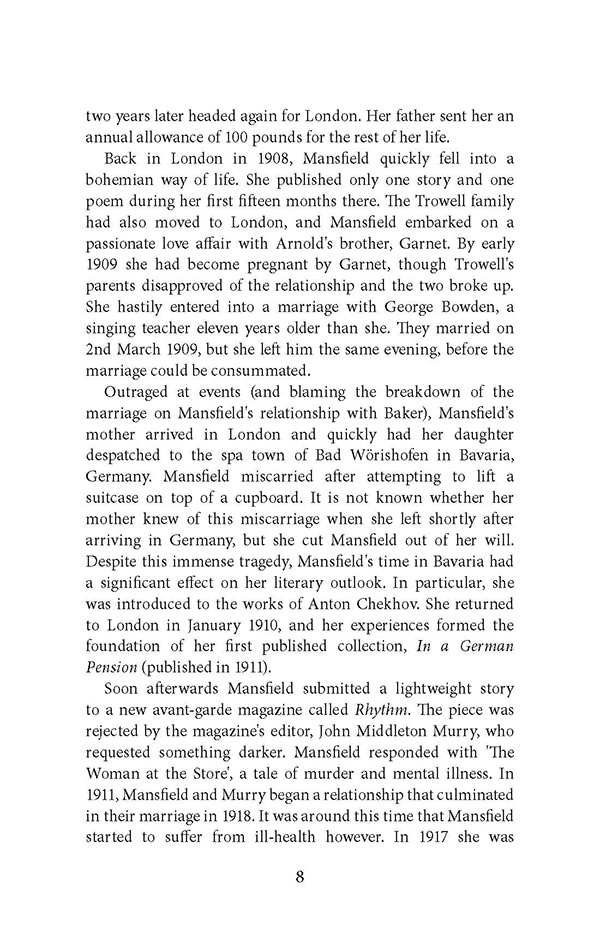 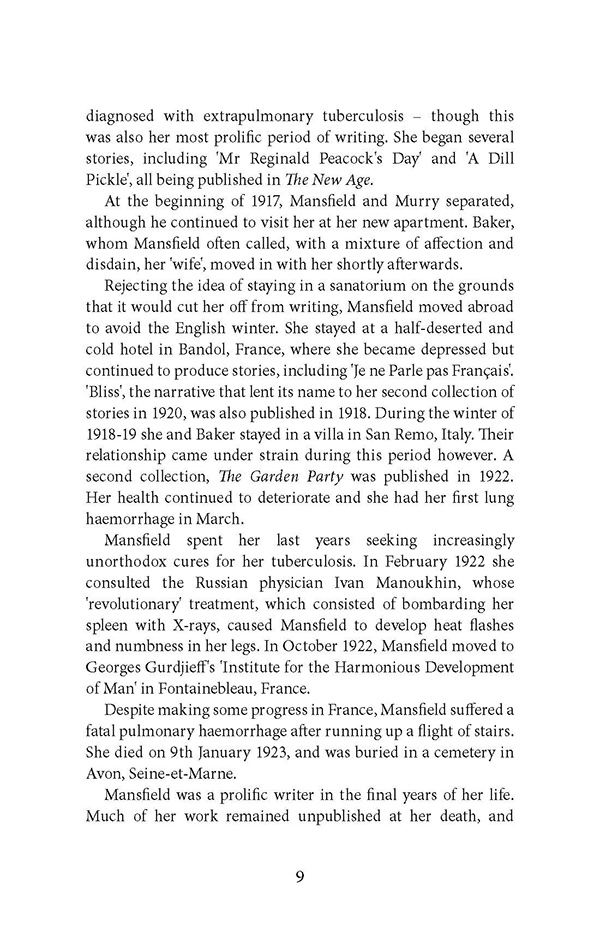 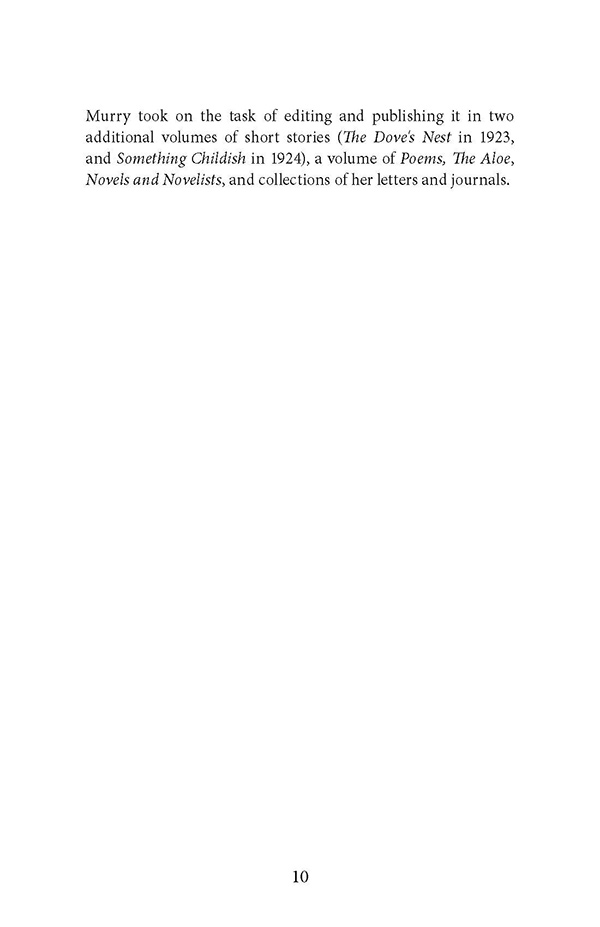 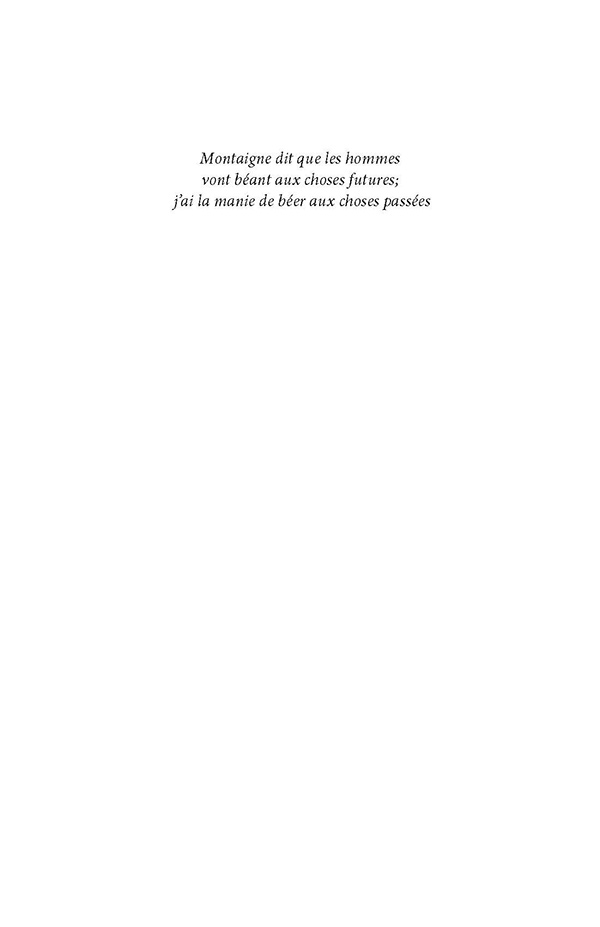 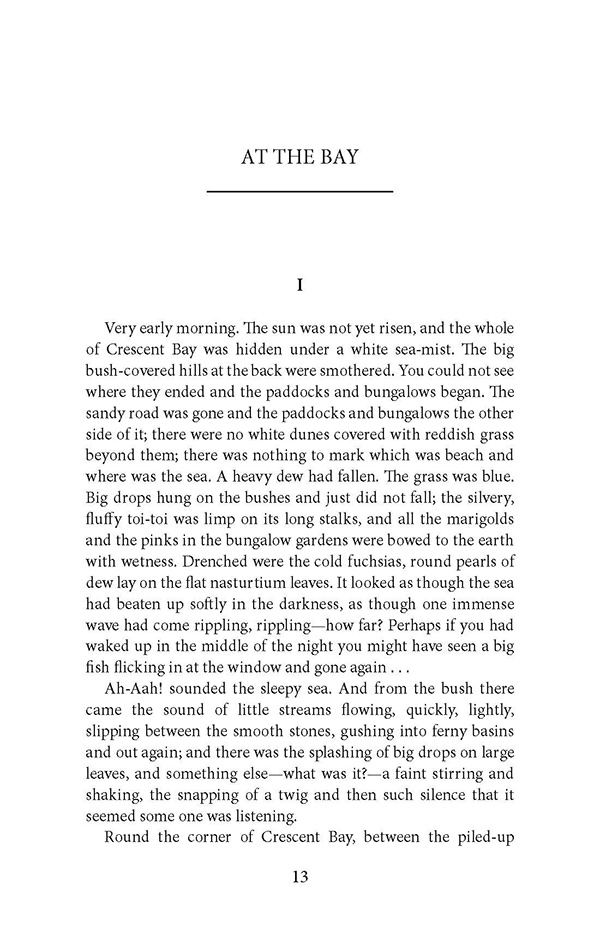 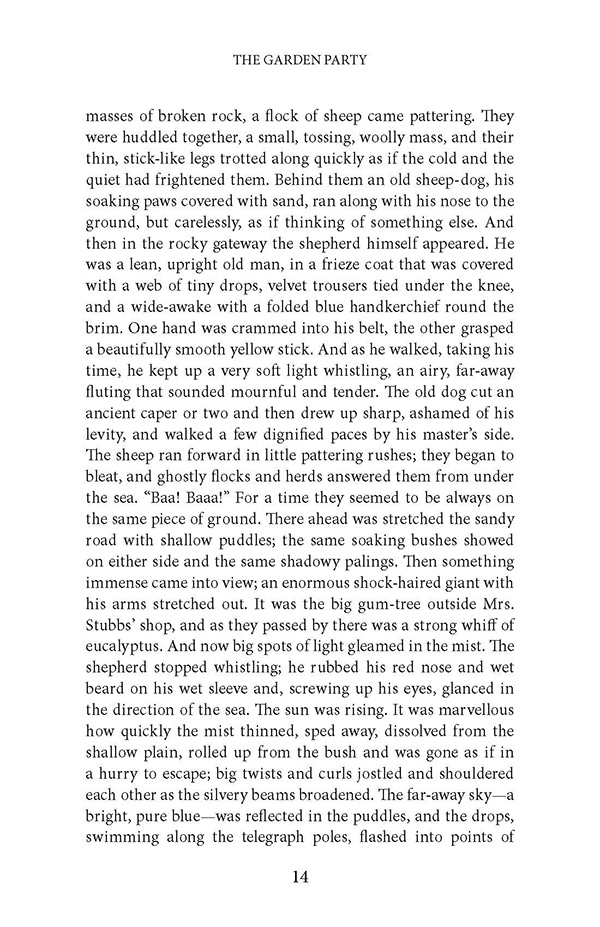 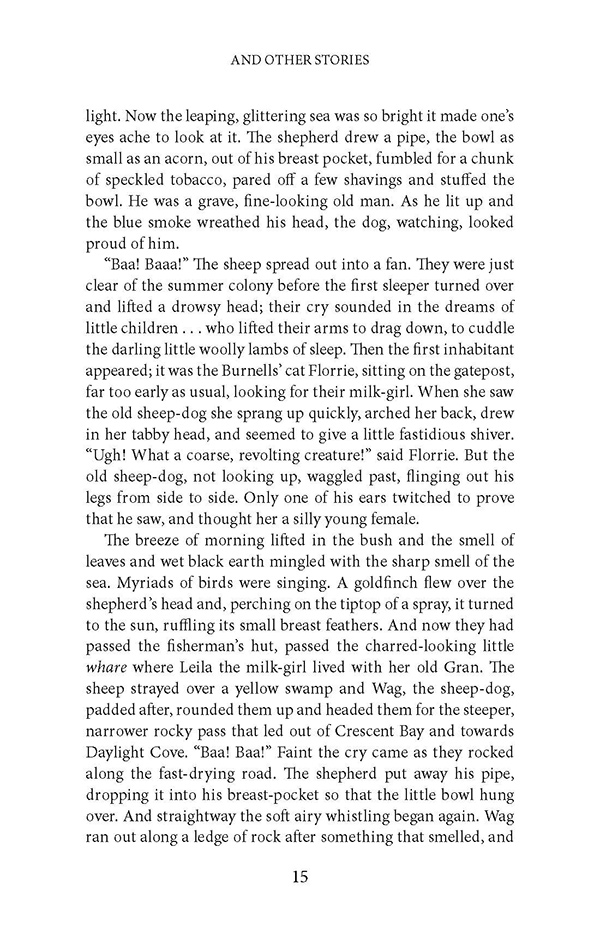 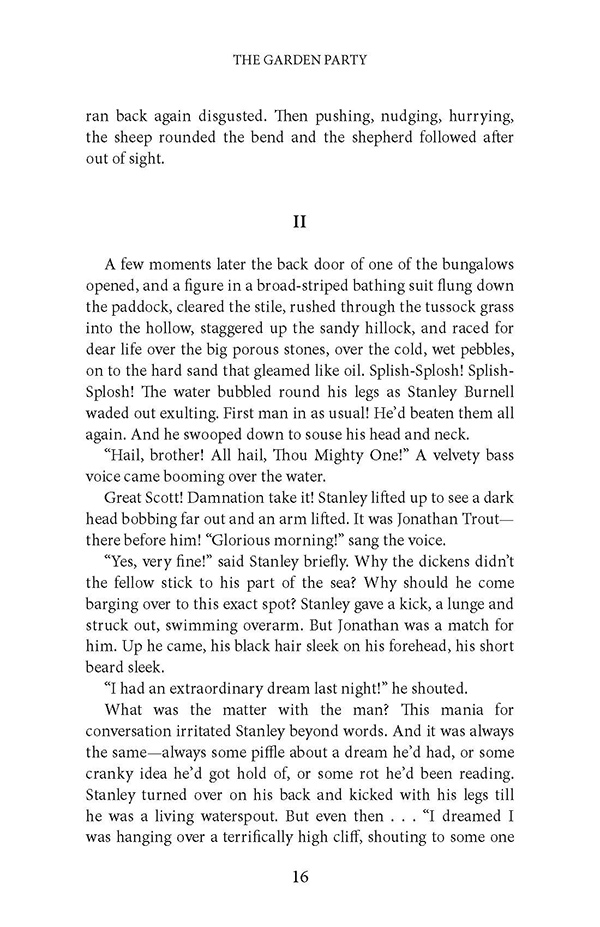 A collection of short stories by Katherine Mansfield.

“The Garden Party and Other Stories” is a 1922 collection of short stories by Katherine Mansfield. Kathleen Mansfield Murry (1888–1923) was a modernist writer from New Zealand who produced poetry and short stories under the pseudonym Katherine Mansfield. She left New Zealand when she was 19 and relocated to England, where she became friends with a number of notable literary figures including D. H. Lawrence, Ottoline Morrell, and Virginia Woolf. Mansfield died of pulmonary tuberculosis in France at the age of 34. The stories include: “At the Bay”, “The Garden-Party”, “The Daughters of the Late Colonel”, “Mr. and Mrs. Dove”, “The Young Girl”, “Life of Ma Parker”, “Marriage À la Mode”, “The Voyage”, “Miss Brill”, “Her First Ball”, “The Singing Lesson”, “The Stranger”, “Bank Holiday”, “An Ideal Family”, and “The Lady’s Maid”. Other notable works by this author include: “The Aloe” (1930), and “The Doves’ Nest and Other Stories” (1923). Read & Co. Classics is proudly republishing this collection of classic short stories now in a new edition complete with a specially-commissioned new biography of the author.

Born Kathleen Mansfield Beauchamp, Mansfield was born into a socially prominent family in Wellington, New Zealand. Her father was the chairman of the Bank of New Zealand, and she was a cousin of the author Countess Elizabeth von Arnim. In 1893, the Mansfield family moved from Thorndon (an inner suburb in Wellington) to Karori (on the western edge of the city), where Mansfield spent the happiest years of her childhood. She used some of her memories of this time as an inspiration for the 'Prelude' story.

Mansfield's first published stories appeared in the High School Reporter and the Wellington Girls' High School magazine in 1898 and 1899.  She never felt quite at home in New Zealand however. Mansfield wrote in her journals of feeling alienated, and of how she had become disillusioned because of the repression of the Māori people. Consequently, in 1903, she moved to London, where she attended Queen's College along with her sisters. The year before, she had also become enamoured of a cellist, Arnold Trowell, although the feelings were largely unreciprocated.

At Queens College, Mansfield met fellow writer Ida Baker, and they became lifelong friends and partners. After finishing her schooling in England, she returned to New Zealand in 1906, and only then began to write short stories. She had several works published in the Native Companion (Australia) – her first paid writing work – and by this time she had her heart set on becoming a professional writer. Mansfield rapidly wearied of the provincial New Zealand lifestyle and of her family, and two years later headed again for London. Her father sent her an annual allowance of 100 pounds for the rest of her life.

Back in London in 1908, Mansfield quickly fell into a bohemian way of life. She published only one story and one poem during her first fifteen months there. The Trowell family had also moved to London, and Mansfield embarked on a passionate love affair with Arnold's brother, Garnet. By early 1909 she had become pregnant by Garnet, though Trowell's parents disapproved of the relationship and the two broke up. She hastily entered into a marriage with George Bowden, a singing teacher eleven years older than she. They married on 2nd March 1909, but she left him the same evening, before the marriage could be consummated.

Outraged at events (and blaming the breakdown of the marriage on Mansfield's relationship with Baker), Mansfield's mother arrived in London and quickly had her daughter despatched to the spa town of Bad Wörishofen in Bavaria, Germany. Mansfield miscarried after attempting to lift a suitcase on top of a cupboard. It is not known whether her mother knew of this miscarriage when she left shortly after arriving in Germany, but she cut Mansfield out of her will. Despite this immense tragedy, Mansfield's time in Bavaria had a significant effect on her literary outlook. In particular, she was introduced to the works of Anton Chekhov. She returned to London in January 1910, and her experiences formed the foundation of her first published collection, In a German Pension (published in 1911).

Soon afterwards Mansfield submitted a lightweight story to a new avant-garde magazine called Rhythm. The piece was rejected by the magazine's editor, John Middleton Murry, who requested something darker. Mansfield responded with 'The Woman at the Store', a tale of murder and mental illness. In 1911, Mansfield and Murry began a relationship that culminated in their marriage in 1918. It was around this time that Mansfield started to suffer from ill-health however. In 1917 she was diagnosed with extrapulmonary tuberculosis – though this was also her most prolific period of writing. She began several stories, including 'Mr Reginald Peacock's Day' and 'A Dill Pickle', all being published in The New Age.

At the beginning of 1917, Mansfield and Murry separated, although he continued to visit her at her new apartment. Baker, whom Mansfield often called, with a mixture of affection and disdain, her 'wife', moved in with her shortly afterwards.

Rejecting the idea of staying in a sanatorium on the grounds that it would cut her off from writing, Mansfield moved abroad to avoid the English winter. She stayed at a half-deserted and cold hotel in Bandol, France, where she became depressed but continued to produce stories, including 'Je ne Parle pas Français'.  'Bliss', the narrative that lent its name to her second collection of stories in 1920, was also published in 1918. During the winter of 1918-19 she and Baker stayed in a villa in San Remo, Italy. Their relationship came under strain during this period however. A second collection, The Garden Party was published in 1922. Her health continued to deteriorate and she had her first lung haemorrhage in March.

Mansfield spent her last years seeking increasingly unorthodox cures for her tuberculosis. In February 1922 she consulted the Russian physician Ivan Manoukhin, whose 'revolutionary' treatment, which consisted of bombarding her spleen with X-rays, caused Mansfield to develop heat flashes and numbness in her legs. In October 1922, Mansfield moved to Georges Gurdjieff's 'Institute for the Harmonious Development of Man' in Fontainebleau, France.

Despite making some progress in France, Mansfield suffered a fatal pulmonary haemorrhage after running up a flight of stairs. She died on 9th January 1923, and was buried in a cemetery in Avon, Seine-et-Marne.

Mansfield was a prolific writer in the final years of her life. Much of her work remained unpublished at her death, and Murry took on the task of editing and publishing it in two additional volumes of short stories (The Dove's Nest in 1923, and Something Childish in 1924), a volume of Poems,  The Aloe, Novels and Novelists, and collections of her letters and journals.

From the Five Rivers

In a German Pension