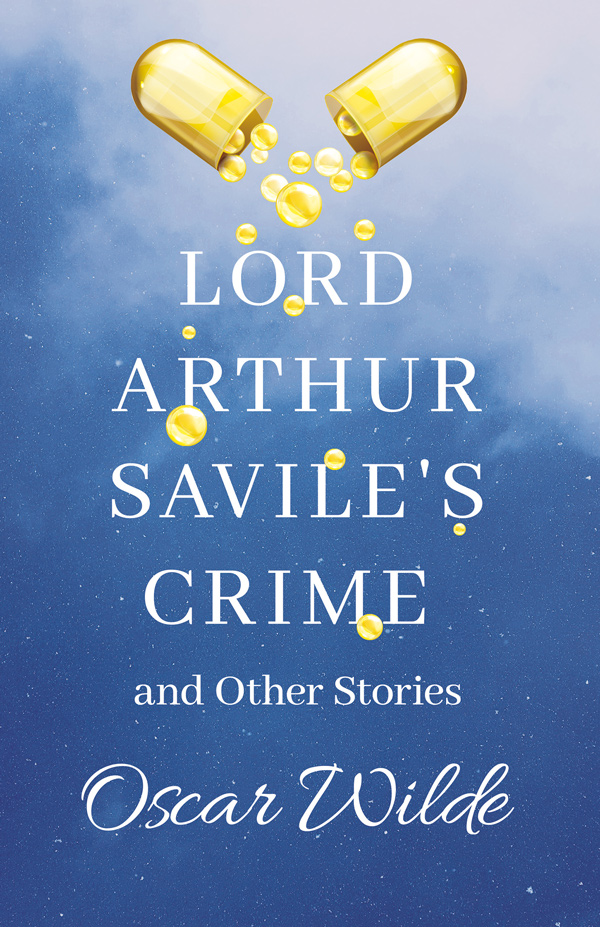 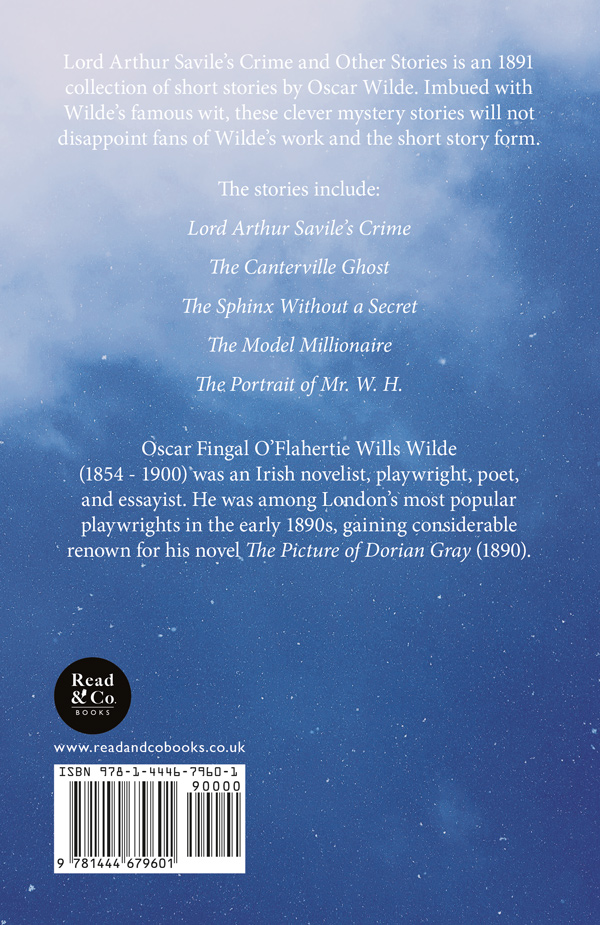 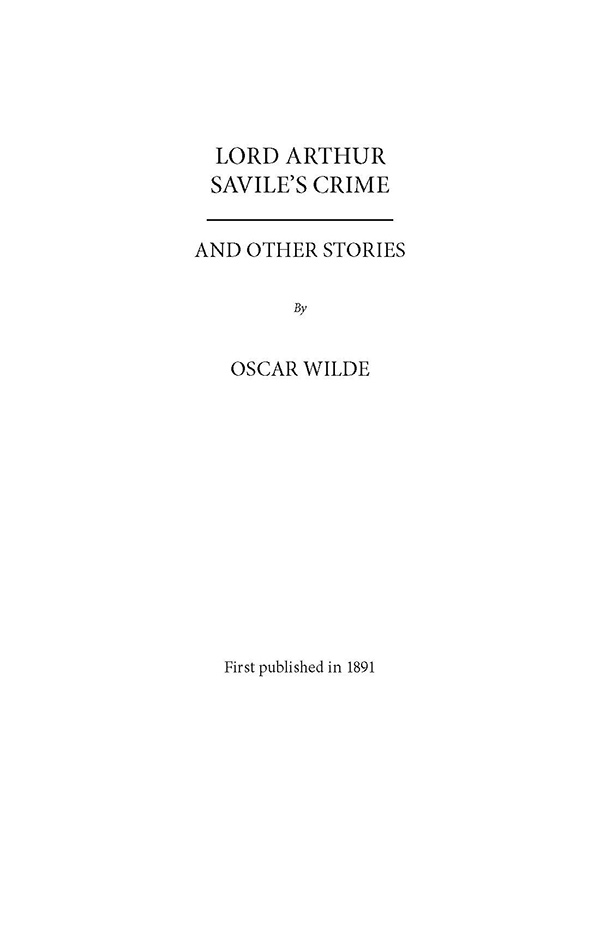 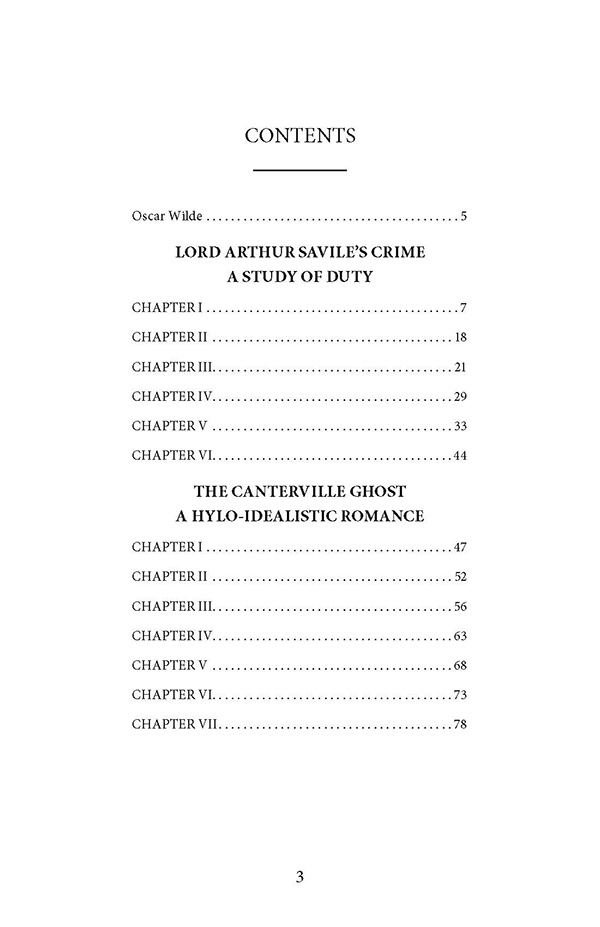 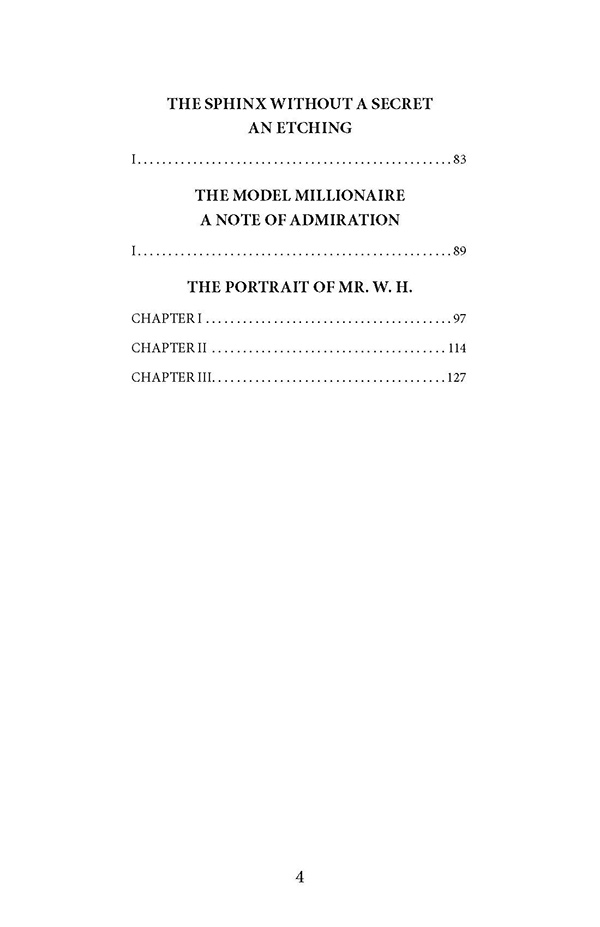 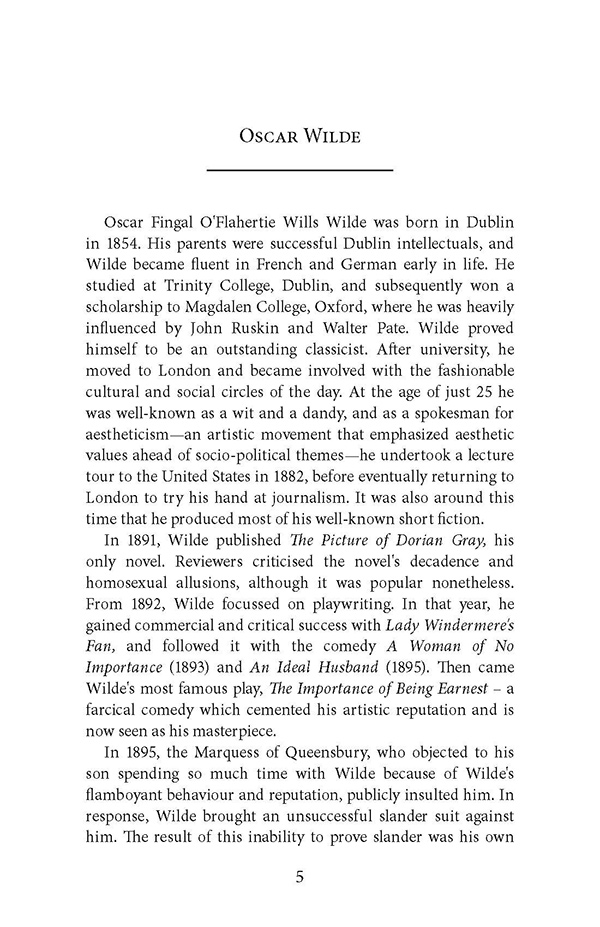 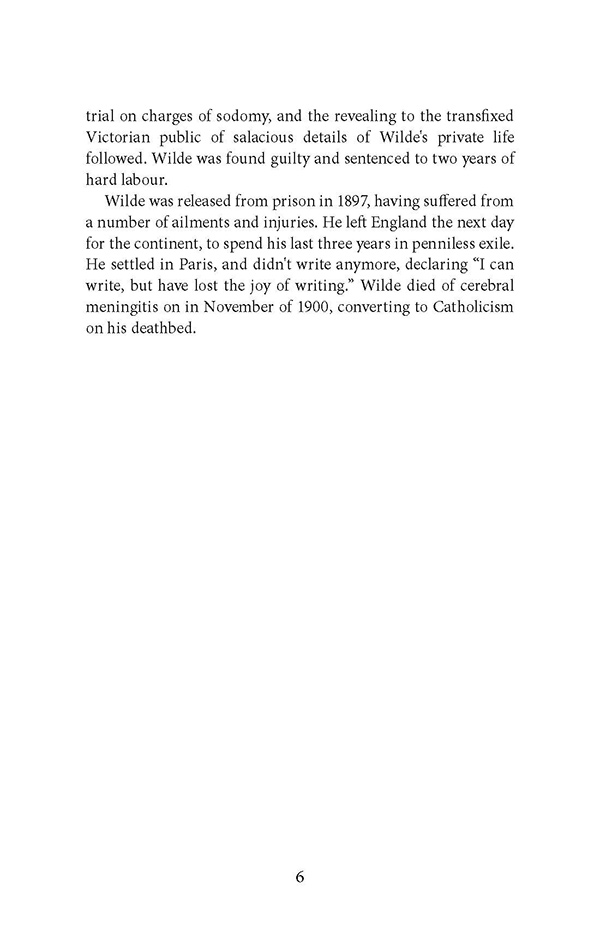 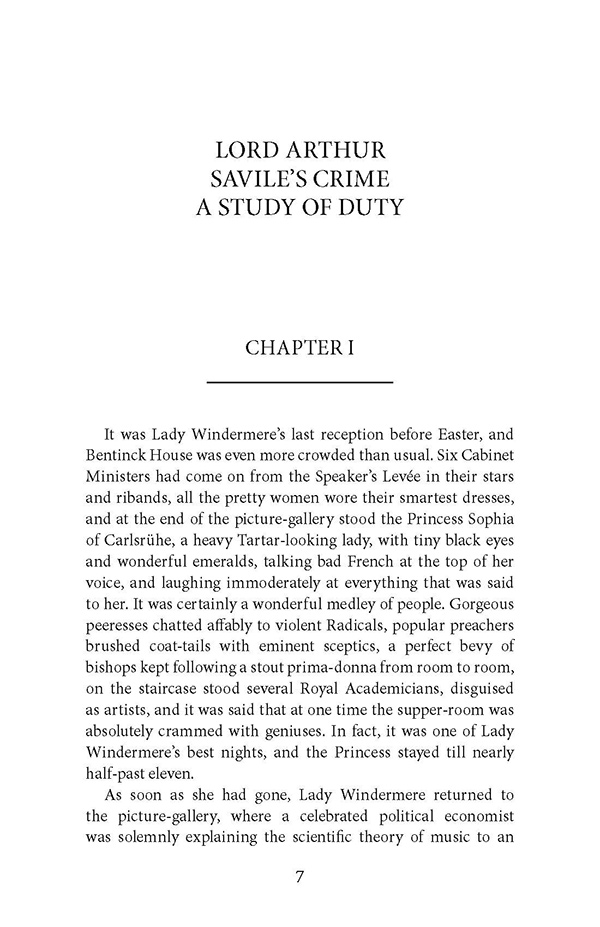 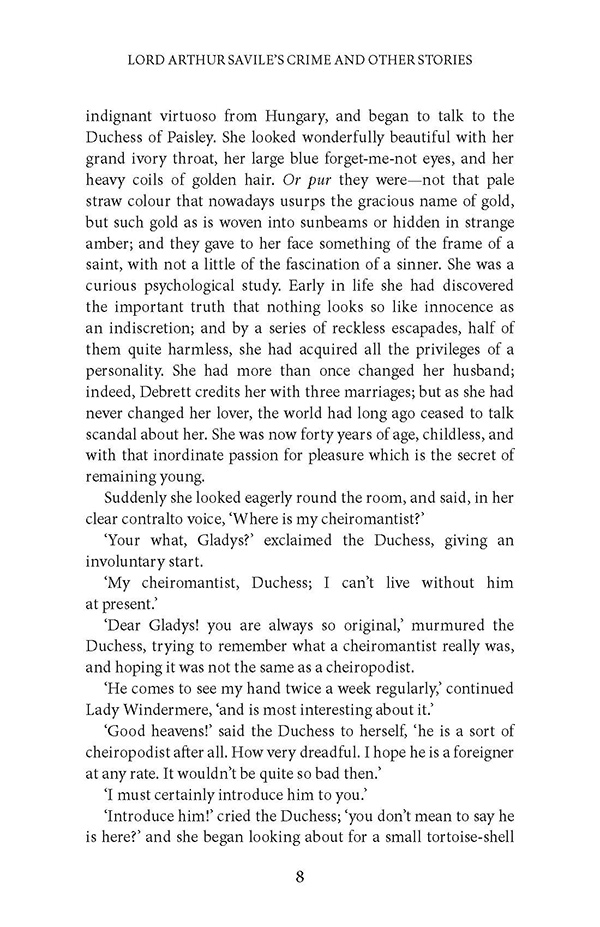 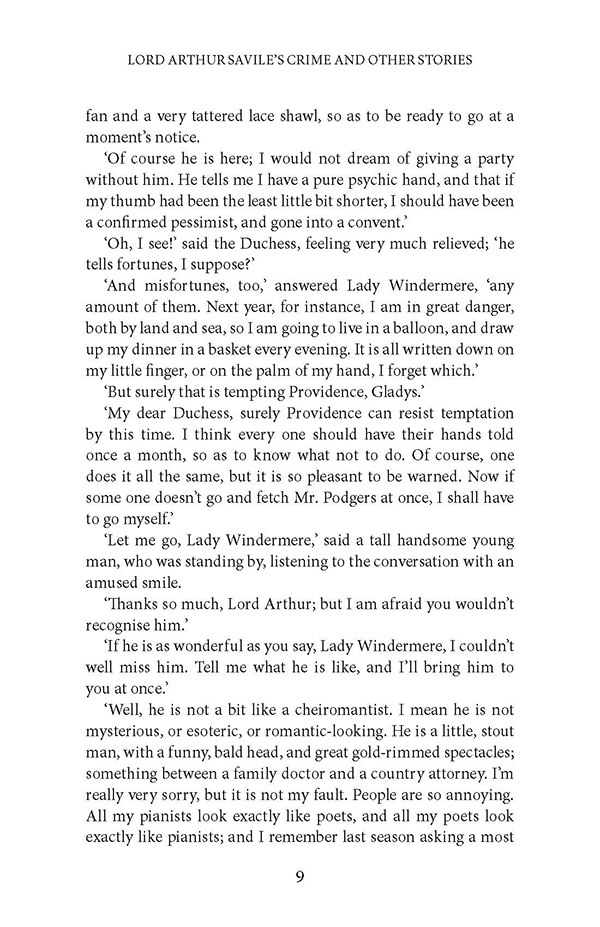 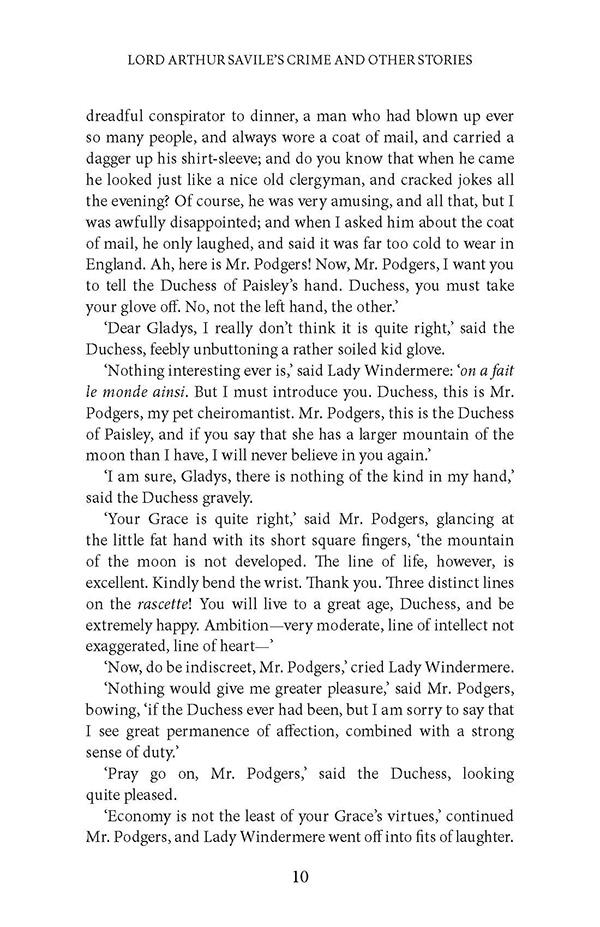 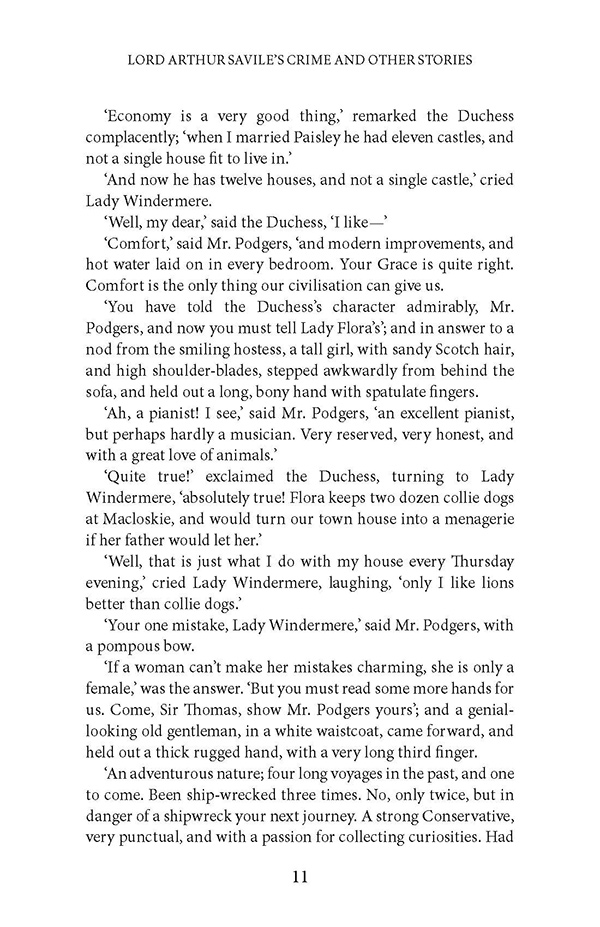 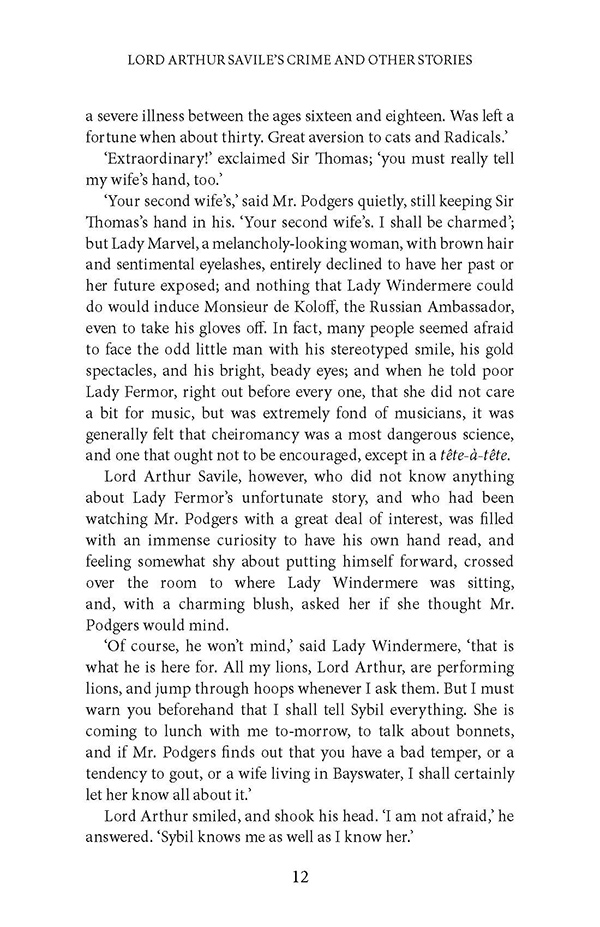 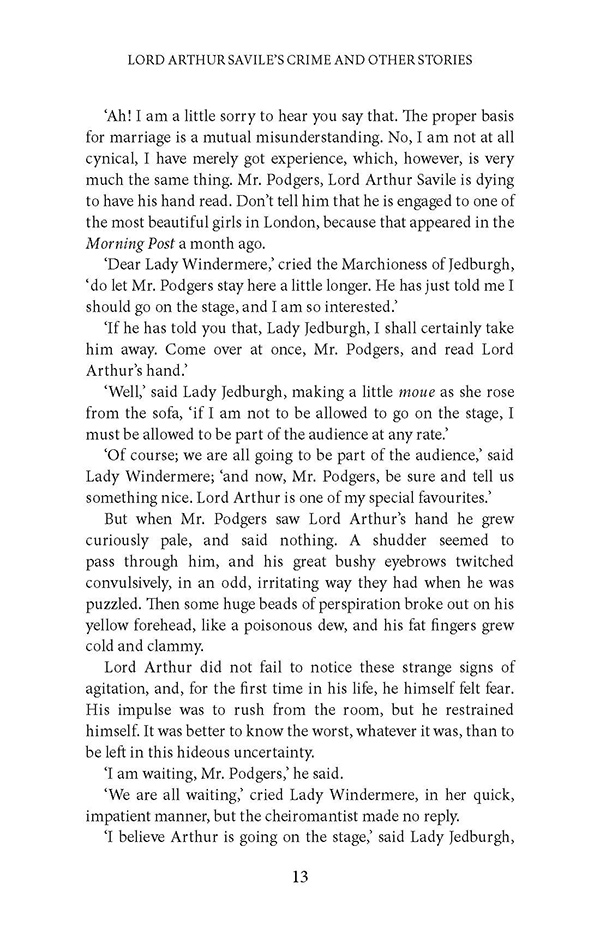 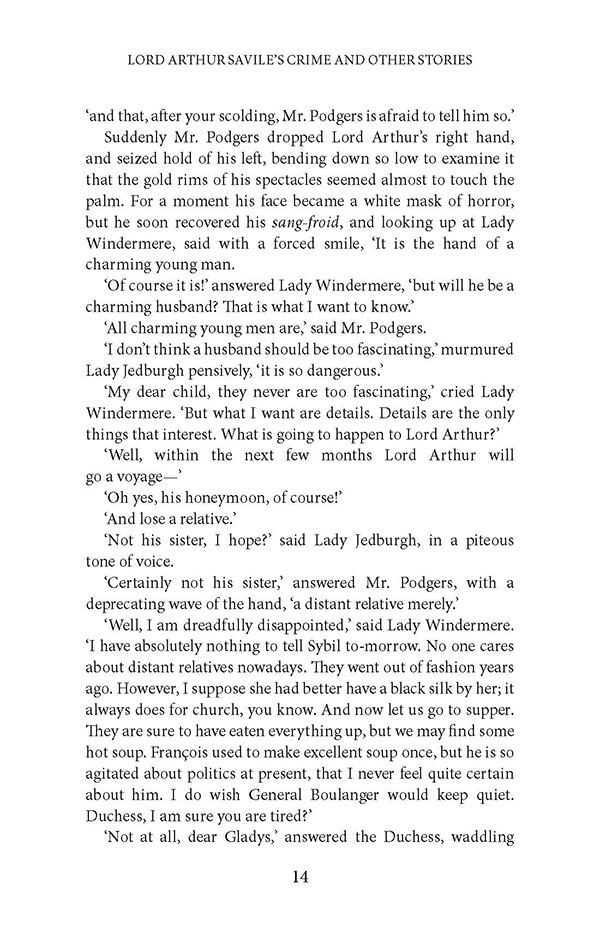 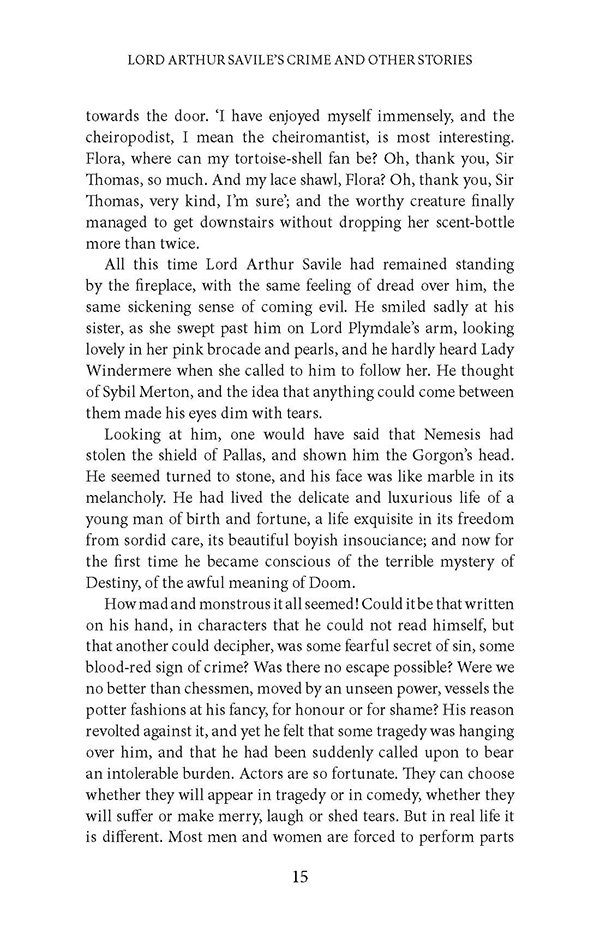 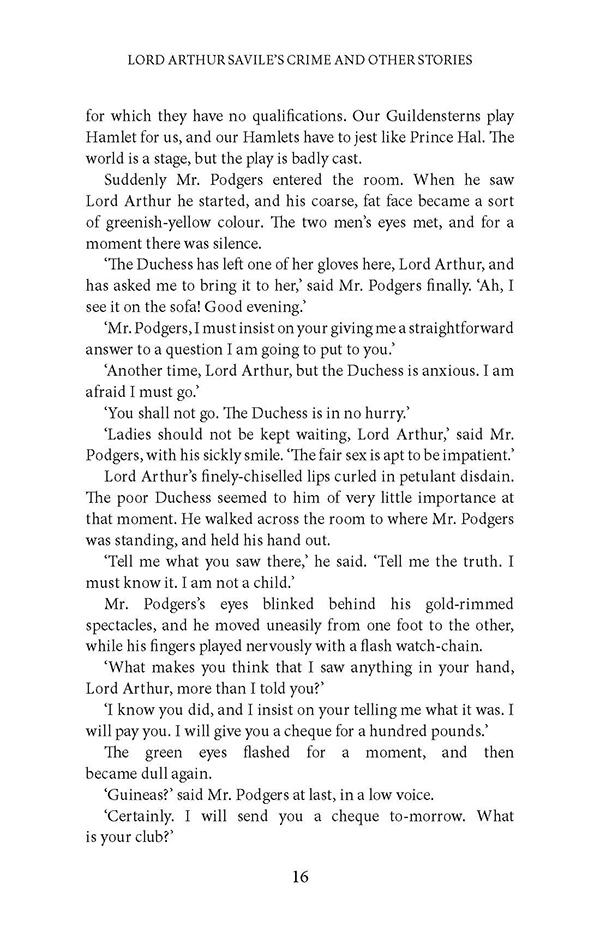 Imbued with Wilde’s famous wit, these clever mystery stories will not disappoint fans of Wilde’s work and the short story form.

“Lord Arthur Savile’s Crime and Other Stories” is an 1891 collection of short stories by Oscar Wilde. Imbued with Wilde’s famous wit, these clever mystery stories will not disappoint fans of Wilde’s work and the short story form. The stories include: “Lord Arthur Savile’s Crime”, “The Canterville Ghost”, “The Sphinx Without a Secret”, “The Model Millionaire” and “The Portrait of Mr. W. H.”. Oscar Fingal O’Flahertie Wills Wilde (16 October 1854 – 30 November 1900) was an Irish novelist, playwright, poet, and essayist. He was among London’s most popular playwrights in the early 1890s, gaining considerable renown for his novel “The Picture of Dorian Gray” (1890). Other notable works by this author include: “The Ballad of Reading Gaol” (1898), “The Importance of Being Earnest” (1895), and “Salome” (1891). Read & Co. Classics is proudly republishing this classic letter now in a new edition complete with a specially-commissioned new biography of the author.

Oscar Fingal O'Flahertie Wills Wilde was born in Dublin in 1854. His parents were successful Dublin intellectuals, and Wilde became fluent in French and German early in life. He studied at Trinity College, Dublin, and subsequently won a scholarship to Magdalen College, Oxford, where he was heavily influenced by John Ruskin and Walter Pate. Wilde proved himself to be an outstanding classicist. After university, he moved to London and became involved with the fashionable cultural and social circles of the day. At the age of just 25 he was well-known as a wit and a dandy, and as a spokesman for aestheticism – an artistic movement that emphasized aesthetic values ahead of socio-political themes – he undertook a lecture tour to the United States in 1882, before eventually returning to London to try his hand at journalism. It was also around this time that he produced most of his well-known short fiction.

In 1891, Wilde published The Picture of Dorian Gray, his only novel. Reviewers criticised the novel's decadence and homosexual allusions, although it was popular nonetheless. From 1892, Wilde focused on playwriting. In that year, he gained commercial and critical success with Lady Windermere's Fan, and followed it with the comedy A Woman of No Importance (1893) and An Ideal Husband (1895). Then came Wilde's most famous play, The Importance of Being Earnest – a farcical comedy which cemented his artistic reputation and is now seen as his masterpiece.

In 1895, the Marquess of Queensbury, who objected to his son spending so much time with Wilde because of Wilde's flamboyant behaviour and homosexual reputation, publicly insulted him. In response, Wilde brought an unsuccessful slander suit against him. The result of this inability to prove slander was his own trial on charges of sodomy, and the revealing to the transfixed Victorian public of salacious details of Wilde's private life followed, including his association with blackmailers and male prostitutes, cross-dressers and homosexual brothels. Wilde was found guilty of sodomy and sentenced to two years of hard labour.

Wilde was released from prison in 1897, having suffered from a number of ailments and injuries. He left England the next day for the continent, to spend his last three years in penniless exile. He settled in Paris, and didn't write anymore, declaring

“I can write, but have lost the joy of writing.”

Wilde died of cerebral meningitis on in November of 1900, converting to Catholicism on his deathbed.

In a German Pension