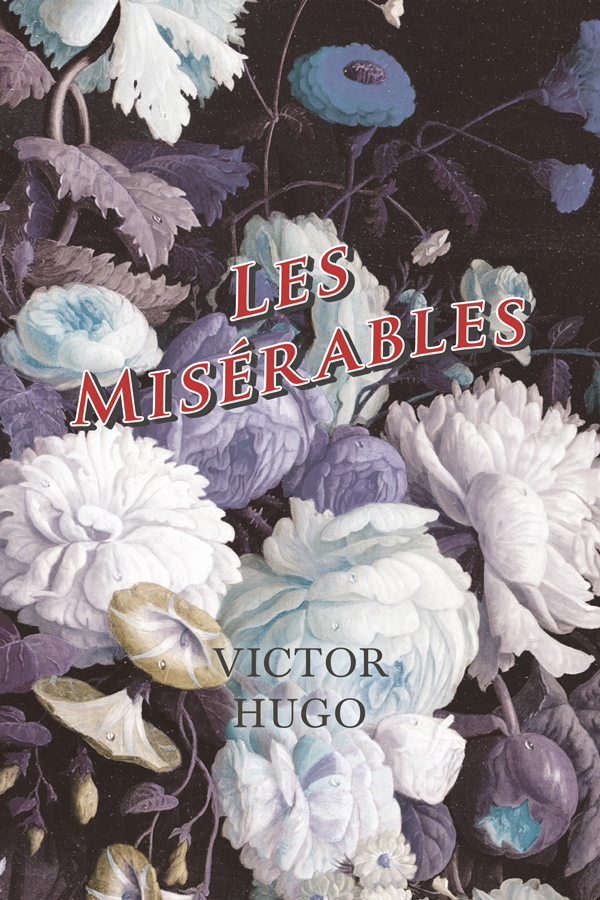 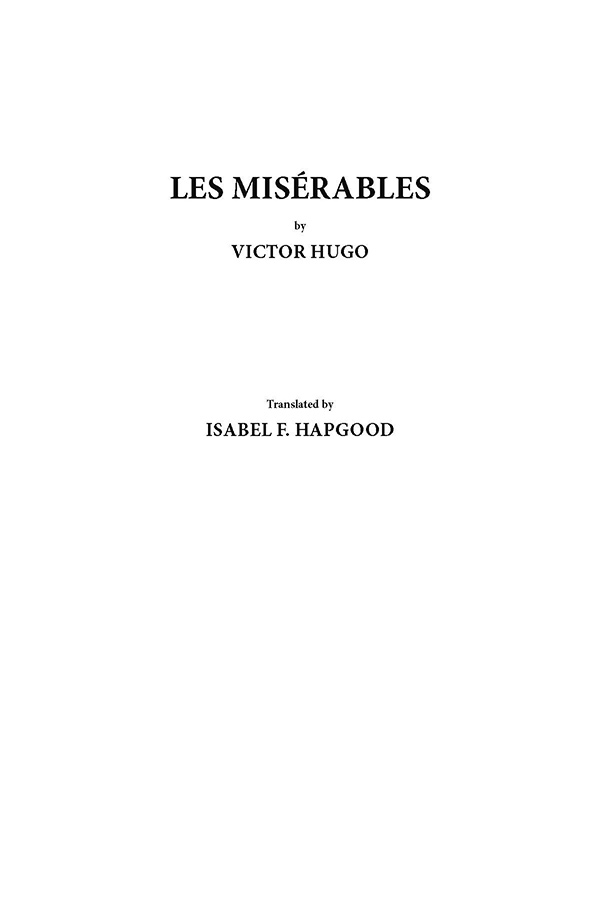 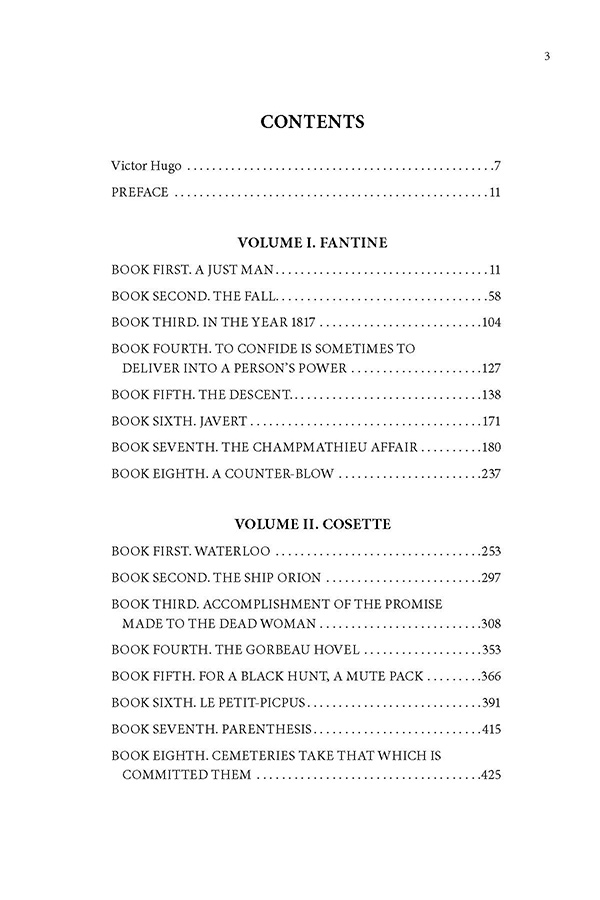 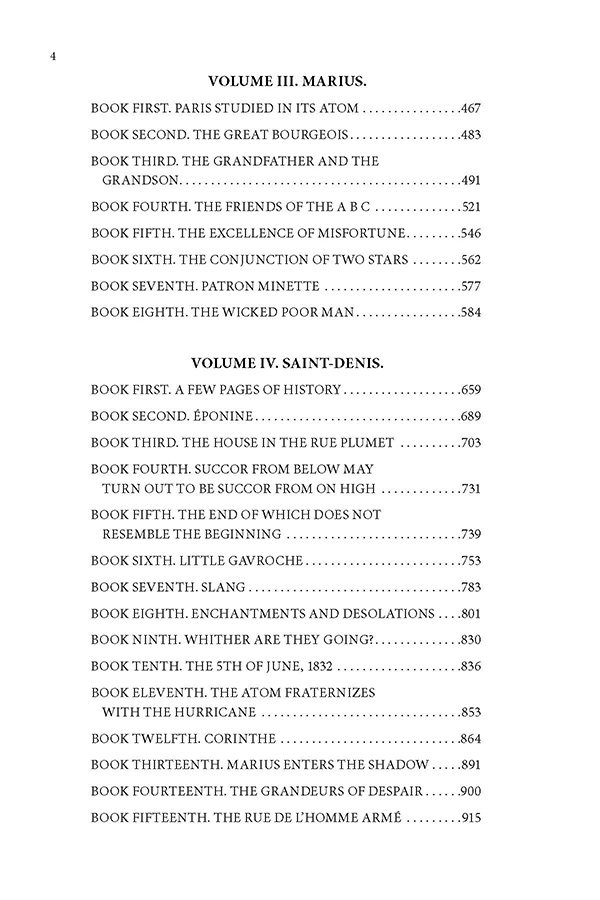 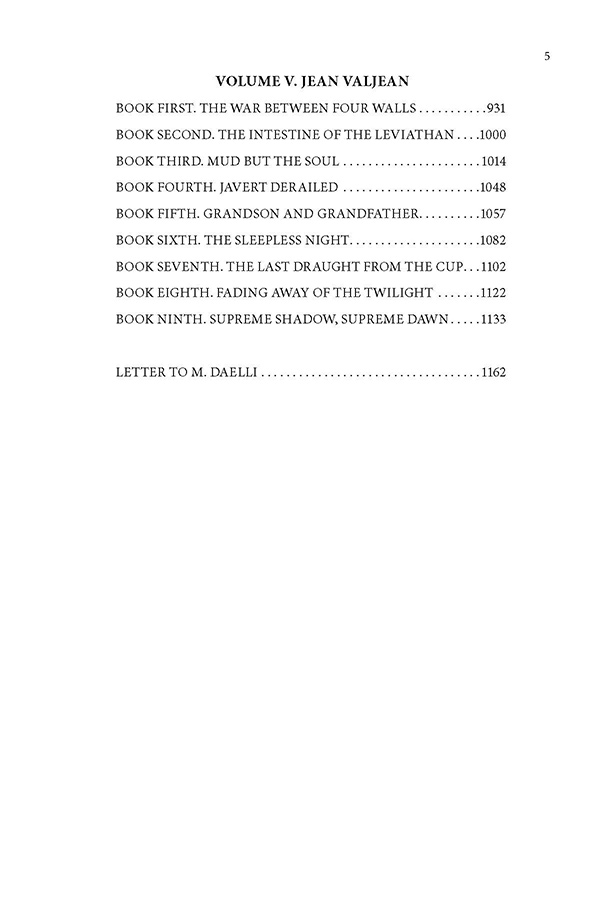 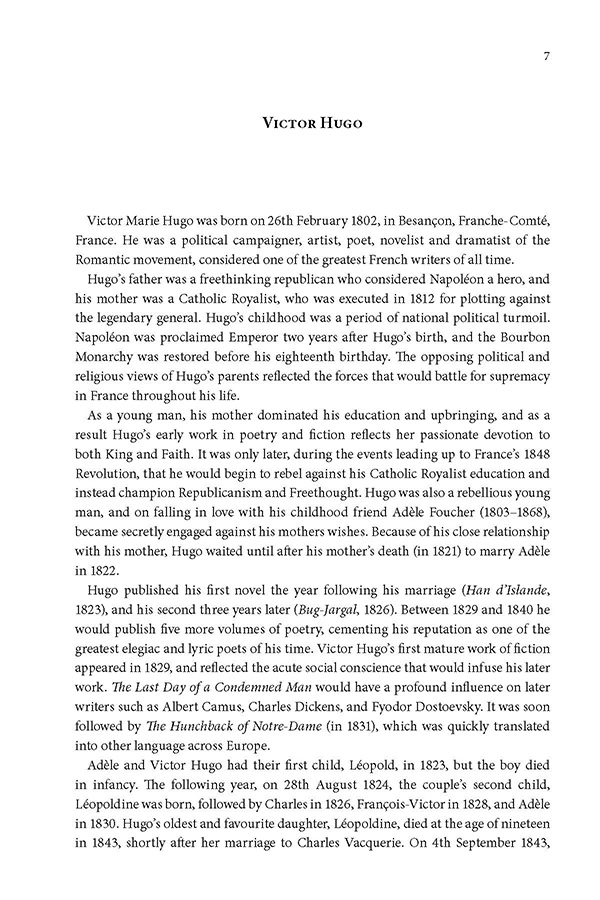 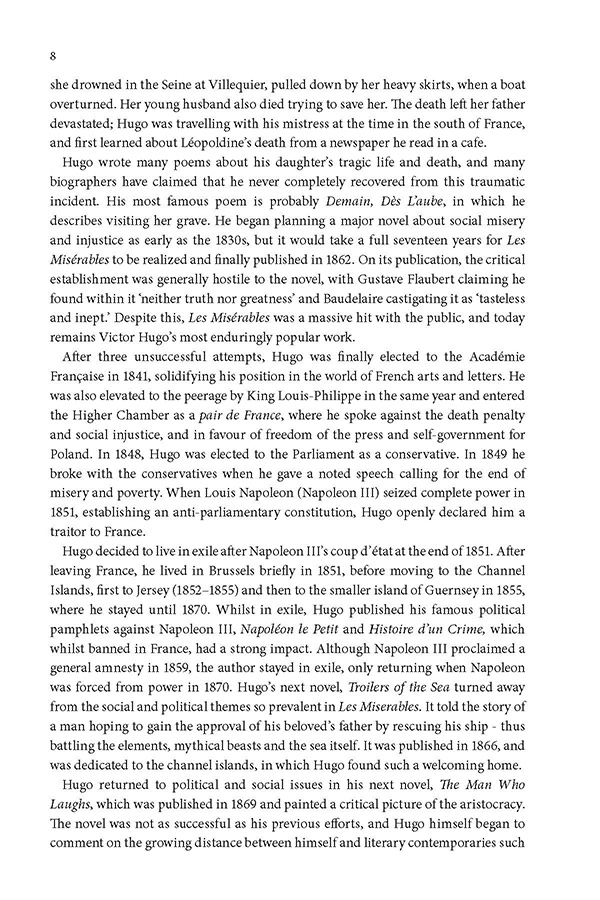 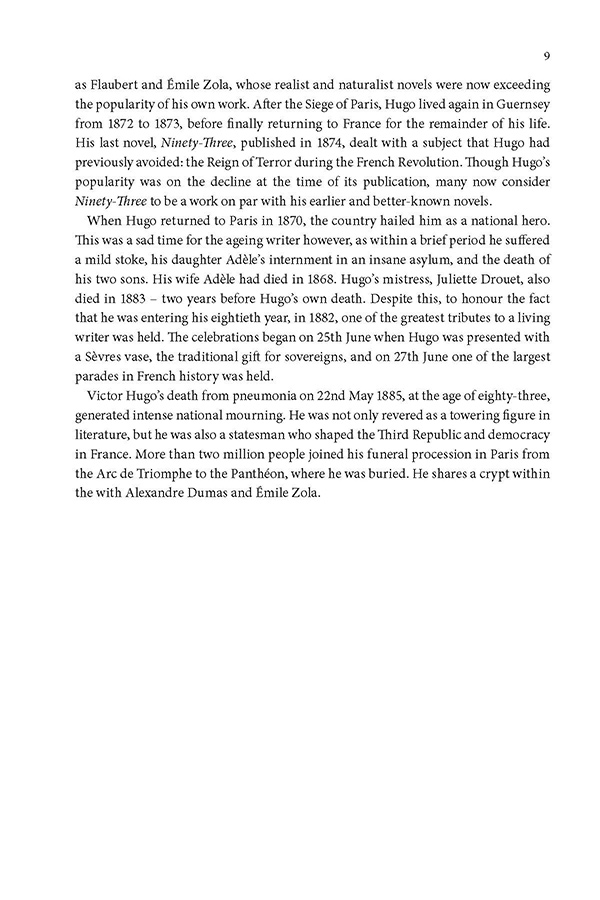 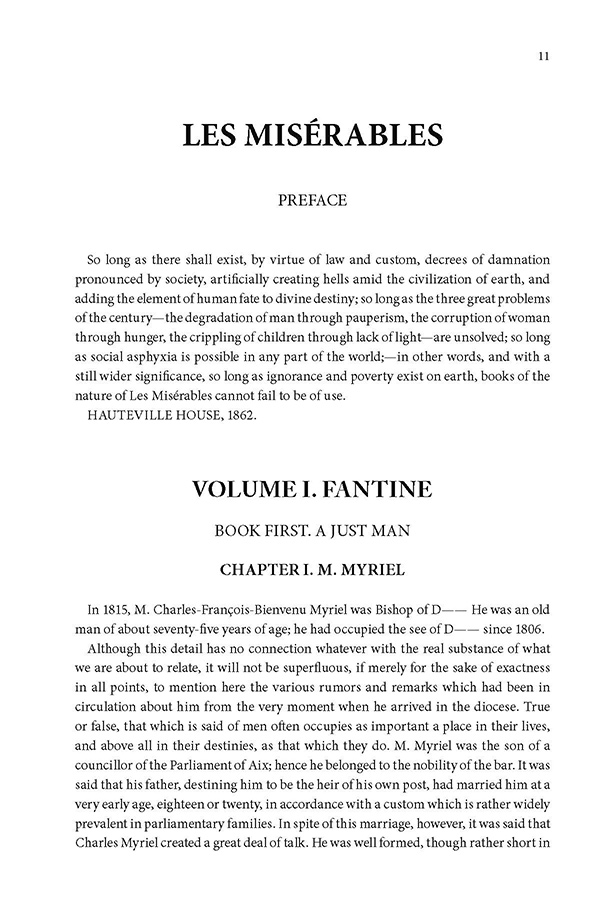 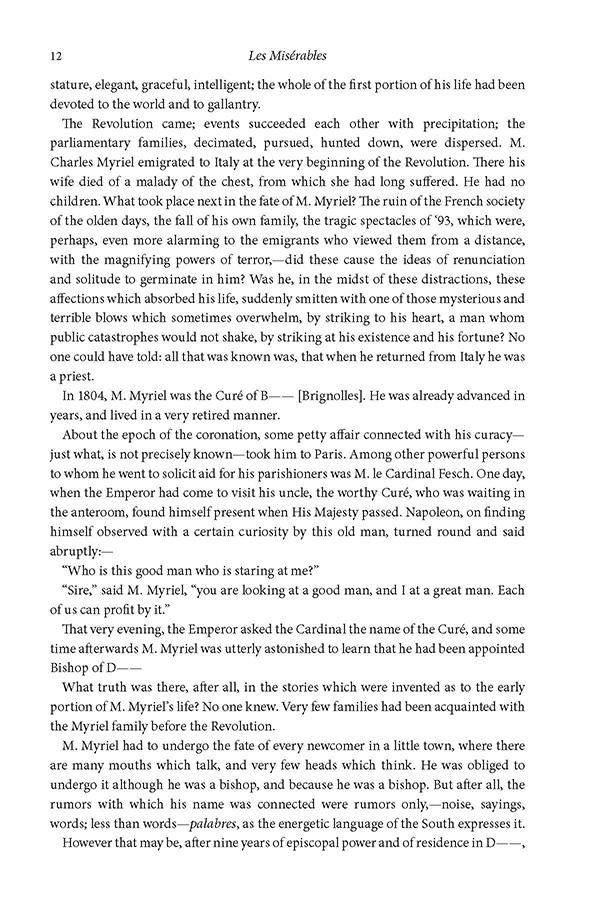 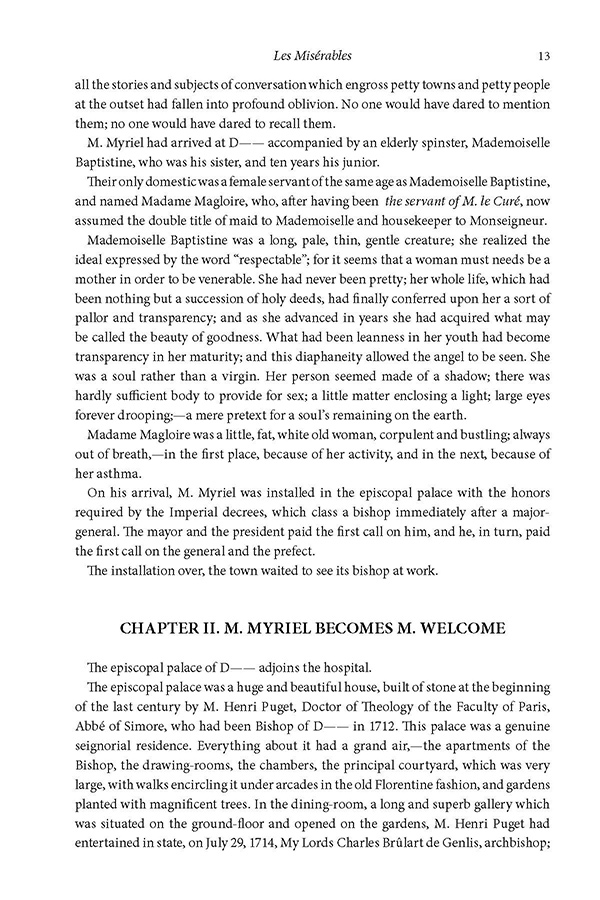 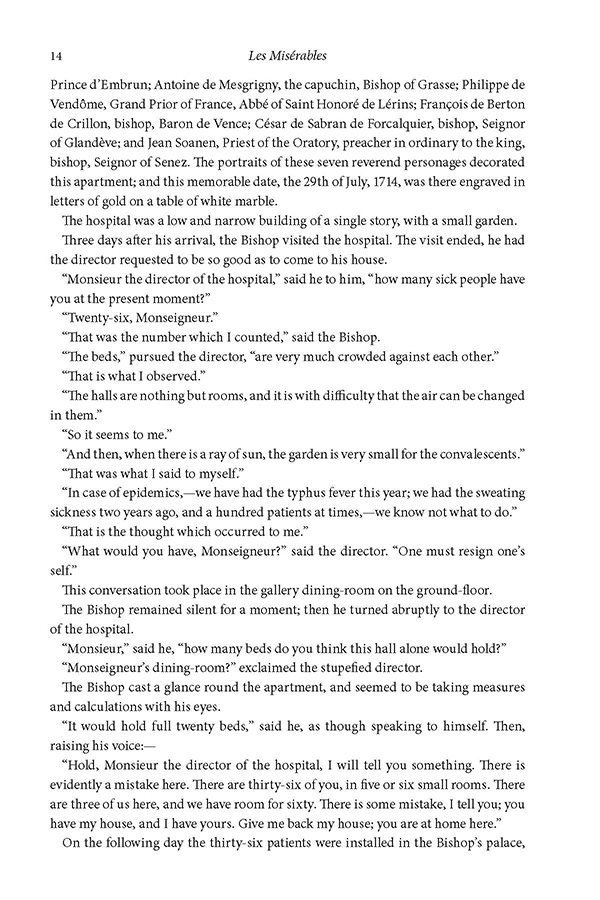 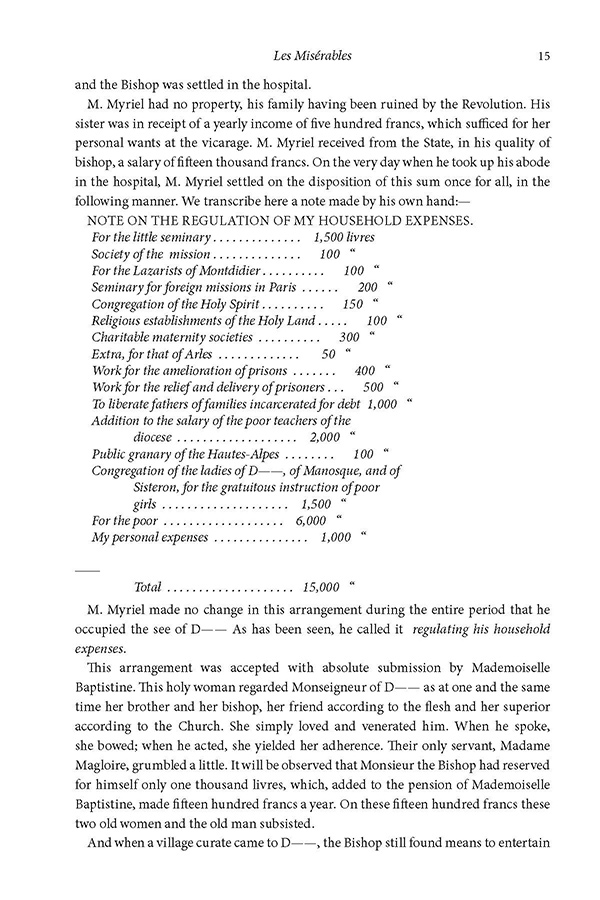 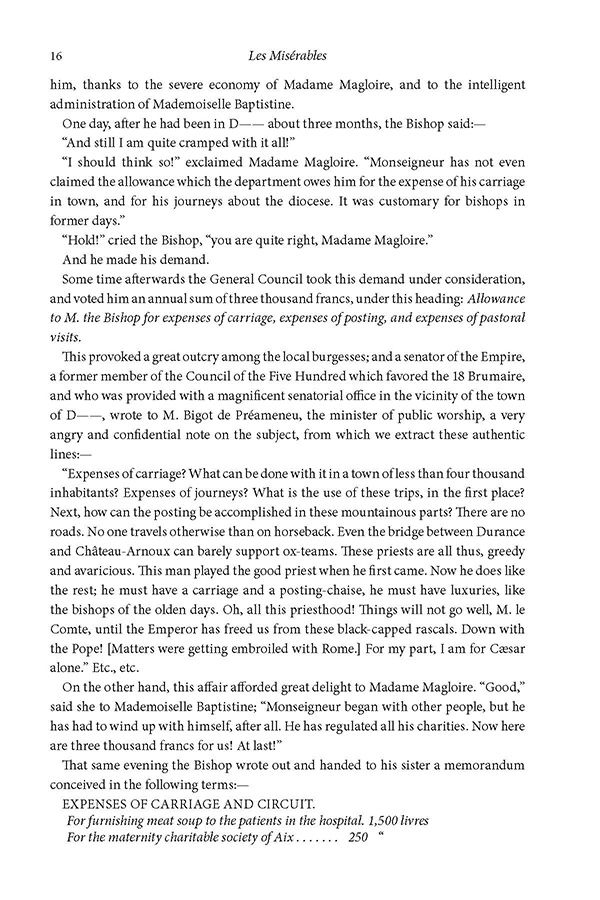 Considered to be one of the greatest novels of the nineteenth century, it chronicles the lives of several characters, focusing on ex-convict Jean Valjean’s struggle for redemption. It is a profound examination of French history, the nature of law and justice, contemporary urban life, politics, moral philosophy, religion, and the types of romantic and familial love.

This is Victor Hugo’s 1862 French historical novel, “Les Misérables”. Considered to be one of the greatest novels of the nineteenth century, it chronicles the lives of several characters, focusing on ex-convict Jean Valjean’s struggle for redemption. It is a profound examination of French history, the nature of law and justice, contemporary urban life, politics, moral philosophy, religion, and the types of romantic and familial love. A veritable masterpiece, “Les Misérables” constitutes a must-read for all lovers of literature. Victor Marie Hugo (1802 – 1885) was a French novelist, dramatist, and poet belonging to the Romantic movement. He is widely hailed as one of the most accomplished and well-known French writers, originally achieving renown for his poetical endeavours-the most notable of which are the volumes “Les Contemplations” and “La Légende des siècles”. Outside of his native country, Hugo’s best-known works are his novels: “Les Misérables” (1862) and “Notre-Dame de Paris” (1831), commonly known as “The Hunchback of Notre-Dame”. Aside from his literary achievements, he also produced over 4,000 beautiful drawings and was a prominent campaigner for social and political issues, including abolishing capital punishment.

Victor Marie Hugo was born on 26th February 1802, in Besançon, Franche-Comté, France. He was a political campaigner, artist, poet, novelist and dramatist of the Romantic movement, considered one of the greatest French writers of all time.

Hugo's father was a freethinking republican who considered Napoléon a hero, and his mother was a Catholic Royalist, who was executed in 1812 for plotting against the legendary general. Hugo's childhood was a period of national political turmoil. Napoléon was proclaimed Emperor two years after Hugo's birth, and the Bourbon Monarchy was restored before his eighteenth birthday. The opposing political and religious views of Hugo's parents reflected the forces that would battle for supremacy in France throughout his life.

As a young man, his mother dominated his education and upbringing, and as a result Hugo's early work in poetry and fiction reflects her passionate devotion to both King and Faith. It was only later, during the events leading up to France's 1848 Revolution, that he would begin to rebel against his Catholic Royalist education and instead champion Republicanism and Freethought. Hugo was also a rebellious young man, and on falling in love with his childhood friend Adèle Foucher (1803–1868), became secretly engaged against his mothers wishes. Because of his close relationship with his mother, Hugo waited until after his mother's death (in 1821) to marry Adèle in 1822.

Hugo published his first novel the year following his marriage (Han d'Islande, 1823), and his second three years later (Bug-Jargal, 1826). Between 1829 and 1840 he would publish five more volumes of poetry, cementing his reputation as one of the greatest elegiac and lyric poets of his time. Victor Hugo's first mature work of fiction appeared in 1829, and reflected the acute social conscience that would infuse his later work. The Last Day of a Condemned Man would have a profound influence on later writers such as Albert Camus, Charles Dickens, and Fyodor Dostoevsky. It was soon followed by The Hunchback of Notre-Dame (in 1831), which was quickly translated into other language across Europe.

Adèle and Victor Hugo had their first child, Léopold, in 1823, but the boy died in infancy. The following year, on 28th August 1824, the couple's second child, Léopoldine was born, followed by Charles in 1826, François-Victor in 1828, and Adèle in 1830. Hugo's oldest and favourite daughter, Léopoldine, died at the age of nineteen in 1843, shortly after her marriage to Charles Vacquerie. On 4th September 1843, she drowned in the Seine at Villequier, pulled down by her heavy skirts, when a boat overturned. Her young husband also died trying to save her. The death left her father devastated; Hugo was travelling with his mistress at the time in the south of France, and first learned about Léopoldine's death from a newspaper he read in a cafe.

Hugo wrote many poems about his daughter's tragic life and death, and many biographers have claimed that he never completely recovered from this traumatic incident. His most famous poem is probably Demain, Dès L'aube, in which he describes visiting her grave. He began planning a major novel about social misery and injustice as early as the 1830s, but it would take a full seventeen years for Les Misérables to be realized and finally published in 1862. On its publication, the critical establishment was generally hostile to the novel, with Gustave Flaubert claiming he found within it 'neither truth nor greatness' and Baudelaire castigating it as 'tasteless and inept.' Despite this, Les Misérables was a massive hit with the public, and today remains Victor Hugo's most enduringly popular work.

After three unsuccessful attempts, Hugo was finally elected to the Académie Française in 1841, solidifying his position in the world of French arts and letters. He was also elevated to the peerage by King Louis-Philippe in the same year and entered the Higher Chamber as a pair de France, where he spoke against the death penalty and social injustice, and in favour of freedom of the press and self-government for Poland. In 1848, Hugo was elected to the Parliament as a conservative. In 1849 he broke with the conservatives when he gave a noted speech calling for the end of misery and poverty. When Louis Napoleon (Napoleon III) seized complete power in 1851, establishing an anti-parliamentary constitution, Hugo openly declared him a traitor to France.

Hugo decided to live in exile after Napoleon III's coup d'état at the end of 1851. After leaving France, he lived in Brussels briefly in 1851, before moving to the Channel Islands, first to Jersey (1852–1855) and then to the smaller island of Guernsey in 1855, where he stayed until 1870. Whilst in exile, Hugo published his famous political pamphlets against Napoleon III, Napoléon le Petit and Histoire d'un Crime, which whilst banned in France, had a strong impact. Although Napoleon III proclaimed a general amnesty in 1859, the author stayed in exile, only returning when Napoleon was forced from power in 1870. Hugo's next novel, Troilers of the Sea turned away from the social and political themes so prevalent in Les Miserables. It told the story of a man hoping to gain the approval of his beloved's father by rescuing his ship - thus battling the elements, mythical beasts and the sea itself. It was published in 1866, and was dedicated to the channel islands, in which Hugo found such a welcoming home.

Hugo returned to political and social issues in his next novel, The Man Who Laughs, which was published in 1869 and painted a critical picture of the aristocracy. The novel was not as successful as his previous efforts, and Hugo himself began to comment on the growing distance between himself and literary contemporaries such as Flaubert and Émile Zola, whose realist and naturalist novels were now exceeding the popularity of his own work. After the Siege of Paris, Hugo lived again in Guernsey from 1872 to 1873, before finally returning to France for the remainder of his life.  His last novel, Ninety-Three, published in 1874, dealt with a subject that Hugo had previously avoided: the Reign of Terror during the French Revolution. Though Hugo's popularity was on the decline at the time of its publication, many now consider Ninety-Three to be a work on par with his earlier and better-known novels.

When Hugo returned to Paris in 1870, the country hailed him as a national hero. This was a sad time for the ageing writer however, as within a brief period he suffered a mild stoke, his daughter Adèle's internment in an insane asylum, and the death of his two sons. His wife Adèle had died in 1868. Hugo's mistress, Juliette Drouet, also died in 1883 – two years before Hugo's own death. Despite this, to honour the fact that he was entering his eightieth year, in 1882, one of the greatest tributes to a living writer was held. The celebrations began on 25th June when Hugo was presented with a Sèvres vase, the traditional gift for sovereigns, and on 27th June one of the largest parades in French history was held.

Victor Hugo's death from pneumonia on 22nd May 1885, at the age of eighty-three, generated intense national mourning. He was not only revered as a towering figure in literature, but he was also a statesman who shaped the Third Republic and democracy in France. More than two million people joined his funeral procession in Paris from the Arc de Triomphe to the Panthéon, where he was buried. He shares a crypt within the with Alexandre Dumas and Émile Zola.

Be the first to review “Les Misérables” Cancel reply

The Descent of Man and Other Stories

Work: A Story of Experience